I know we got back from camping more than two weeks ago, but in a way this is a timely post because it's all about the Kids in the Parks trail that we did (over and over again) and today we got our Kids in the Parks perk pack in the mail, which the kids were rather excited about. They each got a certificate and a little passport with a sticker for Carolina Beach State Park. They're pretty happy about it.

We ended up doing the hike five times in total. I took the kids on it one-way the first day we camped. After we got back from the beach on the second day I took them on it two-ways (out and back in) while Andrew stayed at the cabin to do some writing (when dissertation deadlines are looming there's really not such thing as a "vacation").

Here's a picture of Zoë as we're leaving our campsite: 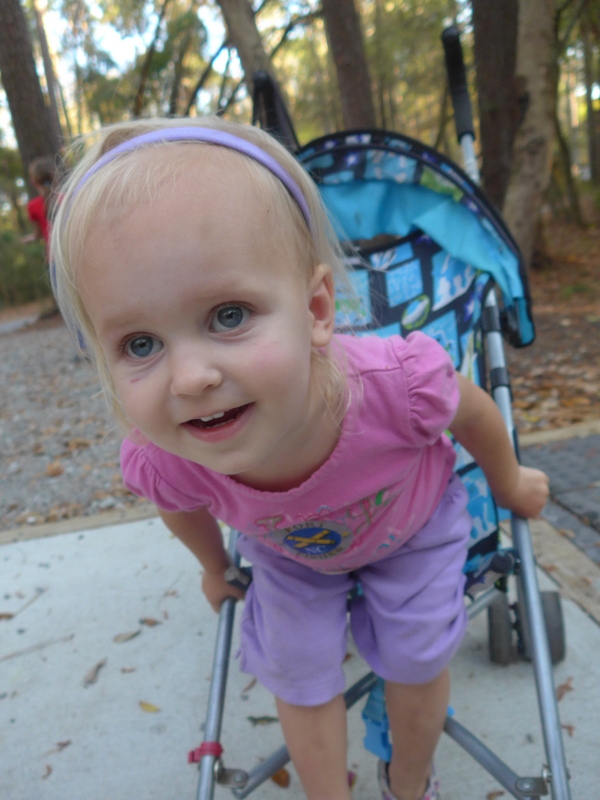 She picked out that headband herself and was so proud of it.

The waterfront isn't technically part of the trail but it was my kids' favourite part, I think. This is Snow's Cut Intercoastal Waterway, which my kids guessed was named for the sandy banks on either side (they thought they looked like snow). It's a good guess because we were at Cape Fear, which is literally named because a ship was embayed in the cape by strong winds and the crew of the ship was afraid they'd be driven into the rocks of the cape—so they named it Cape Fear (it's one of the oldest English names for a place in America). Their guess for how Snow's Cut got its name was good, but way off. It's actually named for the person who led the project of cutting the waterway in the first place—last name of Snow. 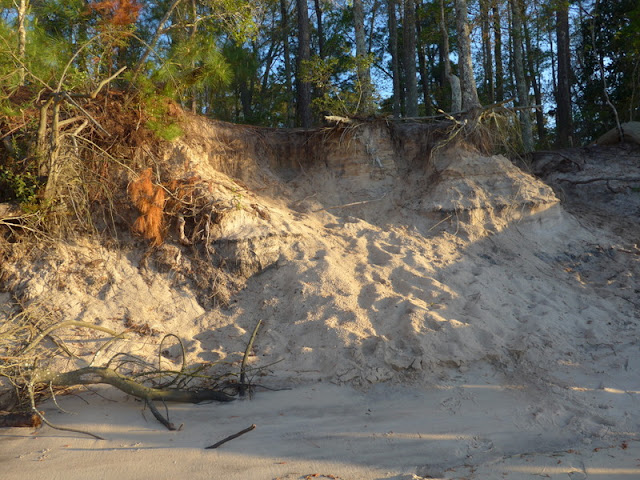 It was cut through in the 1920/30s, and people were against it because they didn't want salt water introduced so close to their fresh water sources. But they went ahead and did it anyway and messed up the water supply and killed a ton of fresh water oysters and cypress trees, and created an unstoppable erosion problem. But ships were able to get places easier...so, yay. 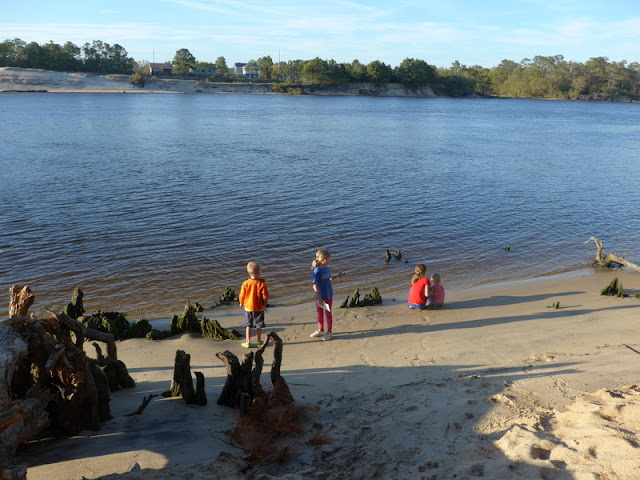 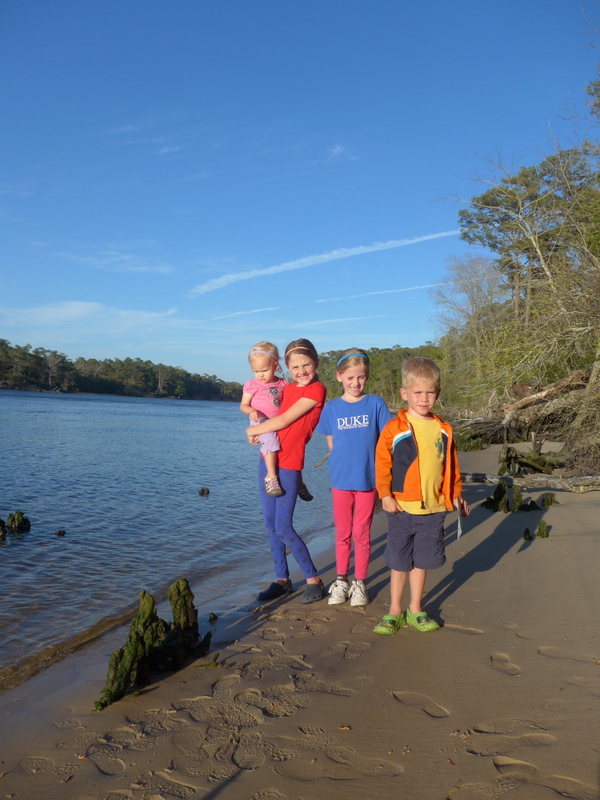 Here are the kids by a cypress "skeleton": 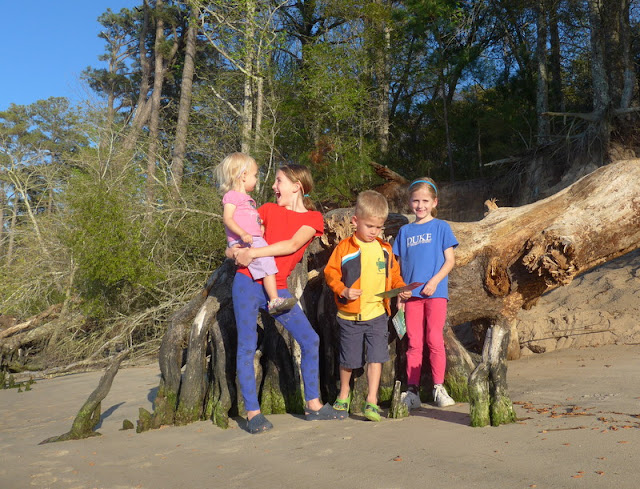 This time we were able to use the brochures as we went through the trail. Miriam had a keen eye at identifying different things in the pamphlet. She found several types of lichen: 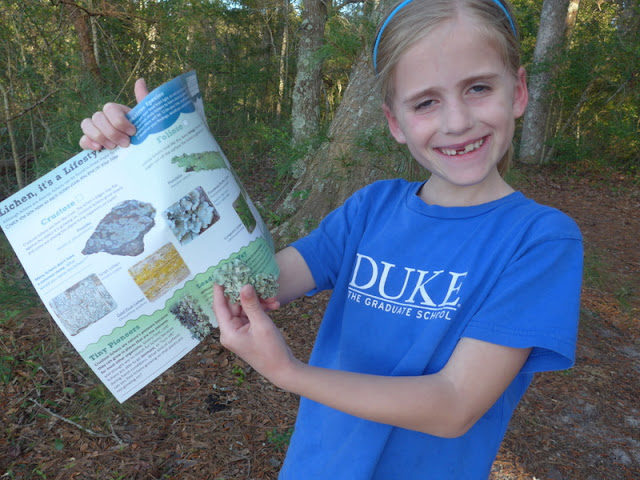 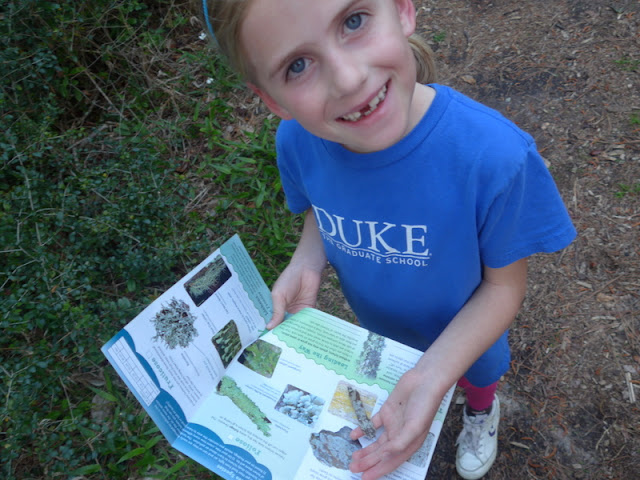 As well as some traces of animal life (here, a shell from a nut someone ate): 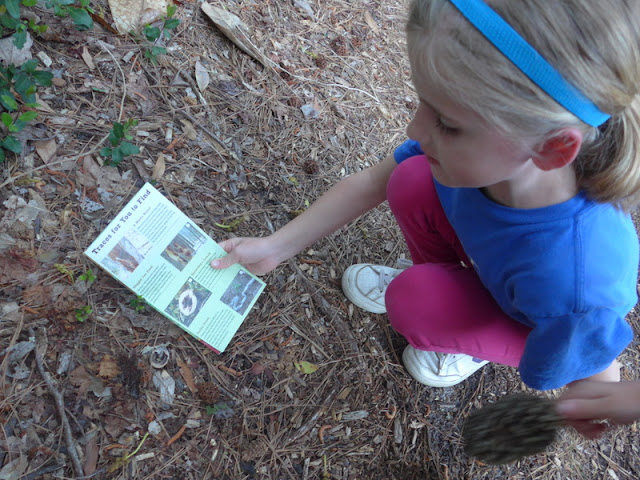 Rachel read a warning about raccoon feces in the part of the pamphlet about animal scat and apparently the information stuck with her because we've been having a bit of a raccoon problem here at home. They've been getting into our trash and it's been quite annoying. We don't usually throw a lot of food away, but Andrew found a package of meat at the back of the fridge that apparently we'd been meaning to use since, uh, early March, that did not look healthy, so he put it out with the trash (wrapped up in multiple plastic bags).

The next day I went to take out some trash and just about died when I saw that hunk of rotten meat slowly sizzling in the afternoon sun. I texted a picture to Andrew, who knows how much I loathe raw meat and he said, "Leave it for me." And I said, "No problem." 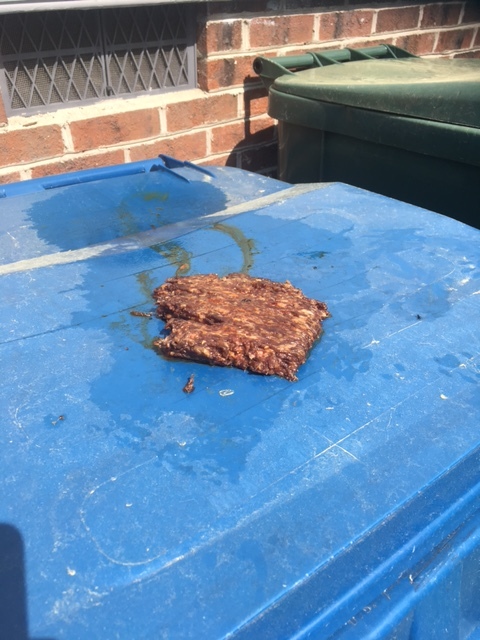 We'd been noticing odd things for a while—like the fact that our carefully tied trash bags were always ripped open and wrappers here and there around the yard—but, honestly, we compost quite a bit of our waste (in a bokashi bin, so it's not as tempting to raccoons because it's fermented).

When he came home he treated our cans with ammonia and cayenne pepper, which seems to have kept the raccoon away...for the time being.

Anyway, when he came in from cleaning the recycling bin, Rachel asked if he scrubbed his hands well because "raccoons carry a roundworm that can be fatal to humans." He was like, "Why does she even know this?" From Kids on the Trail, of course.

While Miriam was busy hunting down things featured in the brochure, Benjamin and Zoë were busy finding their own treasures. 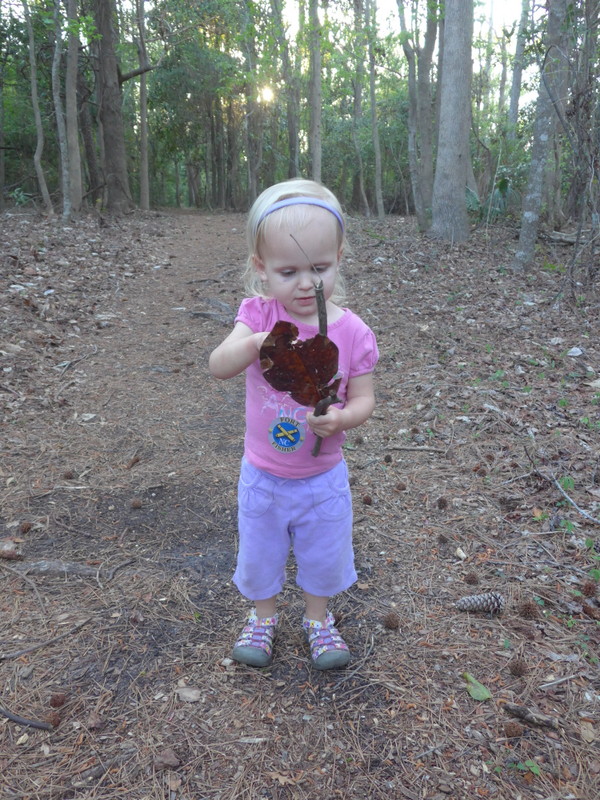 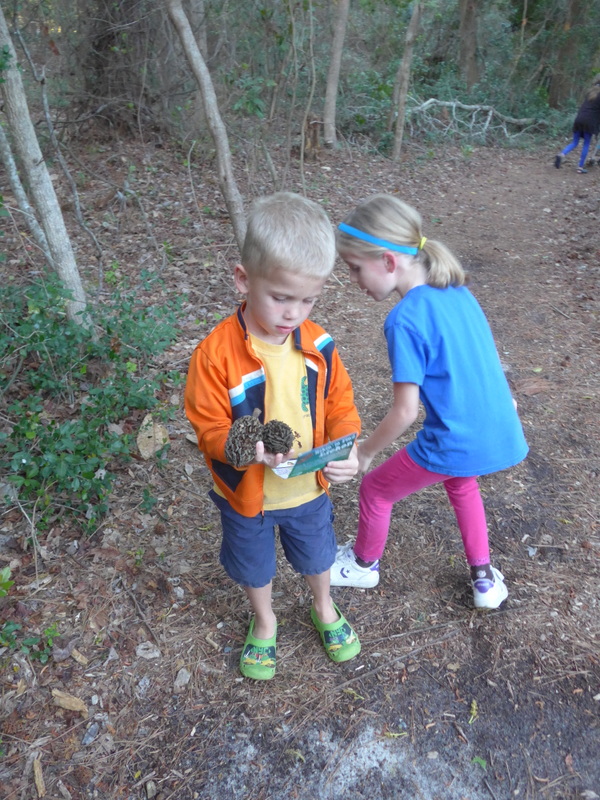 You can see Rachel racing away at the top of this photo. She was an excellent helper on the trail, though she did through a bit of an attitude. Her dopey mother thought our stroller could handle the trail (it couldn't) so after struggling with Zoë and the stroller the whole way down the trail, I had Zoë get out to walk and asked Rachel if she'd push the now-empty stroller back for me. She did a fine job and I really appreciated her help...even if she wasn't happy about doing it. It's nice to have capable, helpful children! 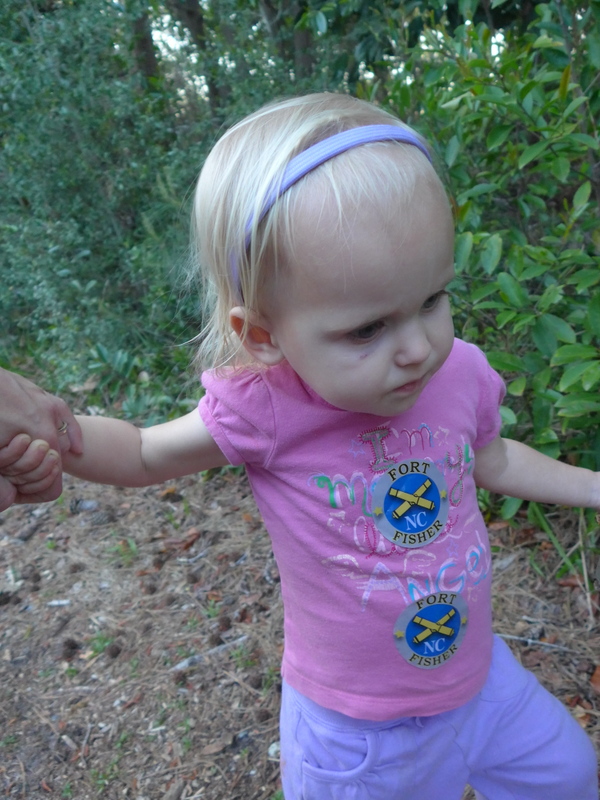 Here we are back at the waterfront, where Rachel was more than happy to abandon the stroller: 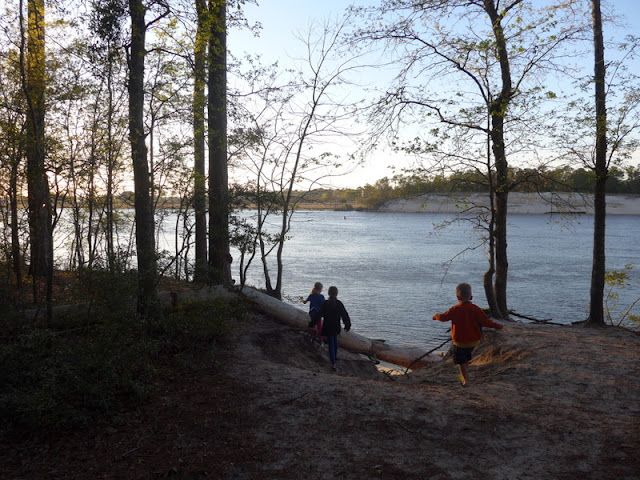 Here's Zoë hiking down the steep bank all by herself: 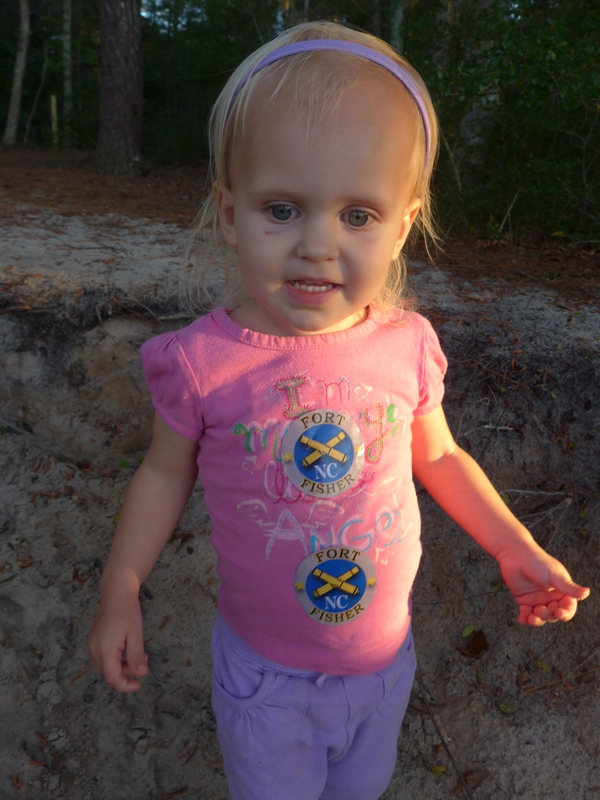 And very nearly smiling for the camera: 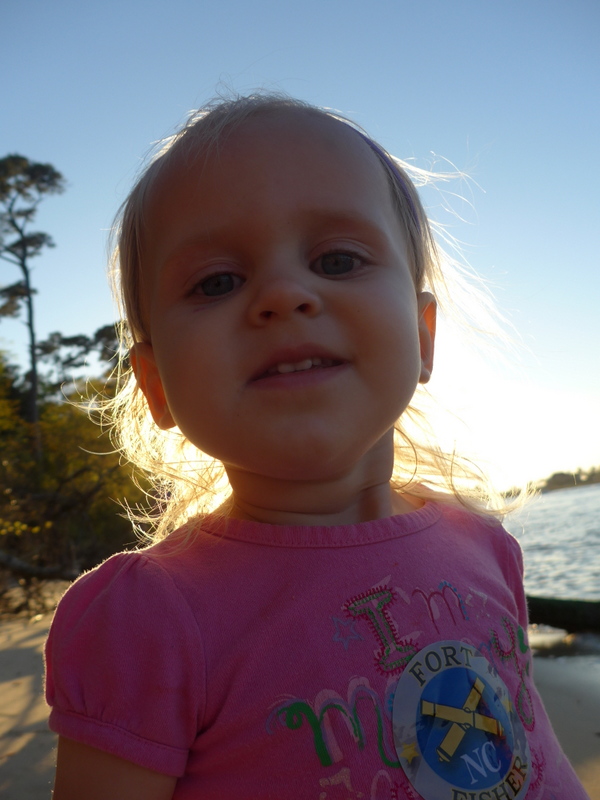 Here's Miriam walking along with the setting sun behind her: 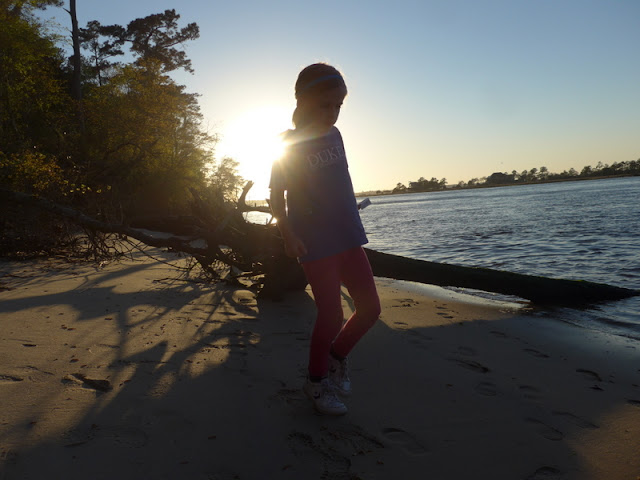 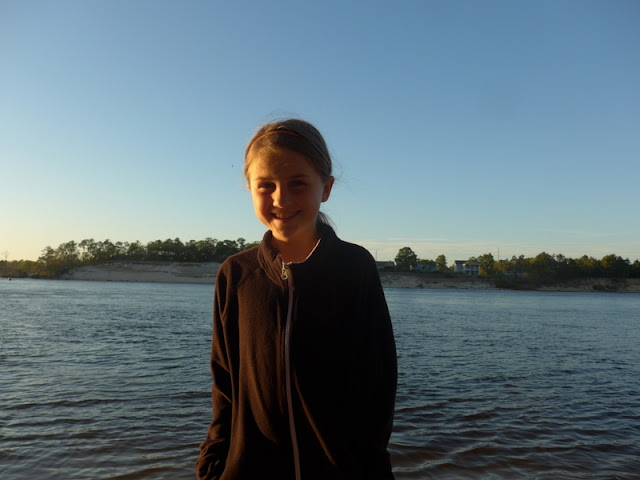 And here's Benjamin very seriously imagining some complex scenario that he described to me the entire walk back to the campsite: 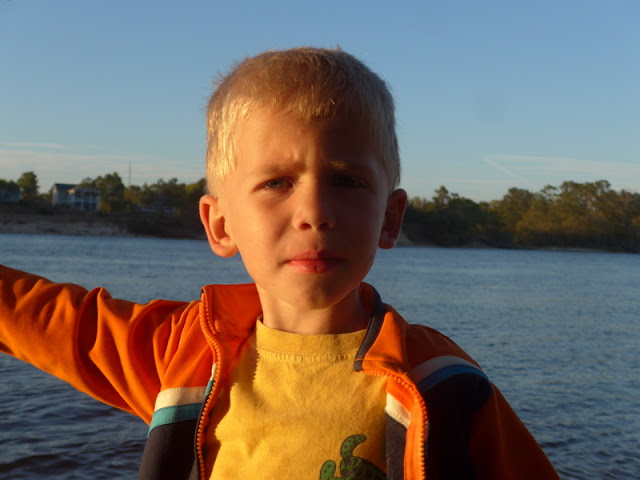 Here are the girls once again: 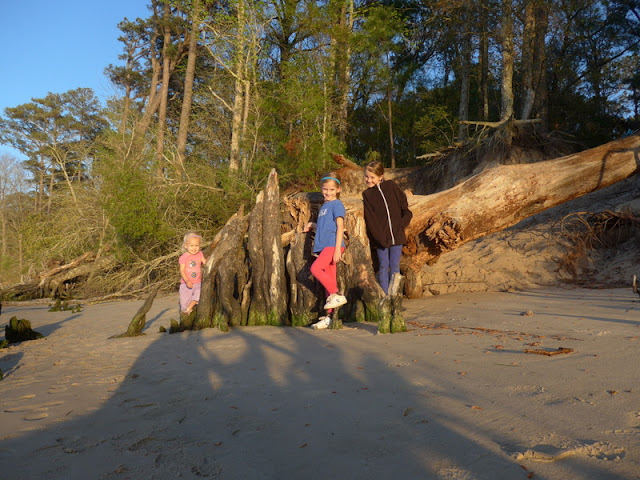 And Zoë pointing at something very exciting (you can see Rachel up in the trees in the top lefthand corner): 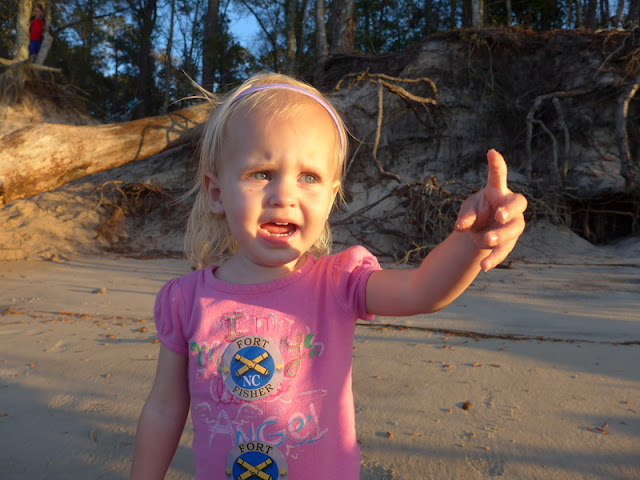 The next day we had to say goodbye to our campsite. We packed up all our stuff, hauled away all our trash, swept out the cabin, and posed by the sign: 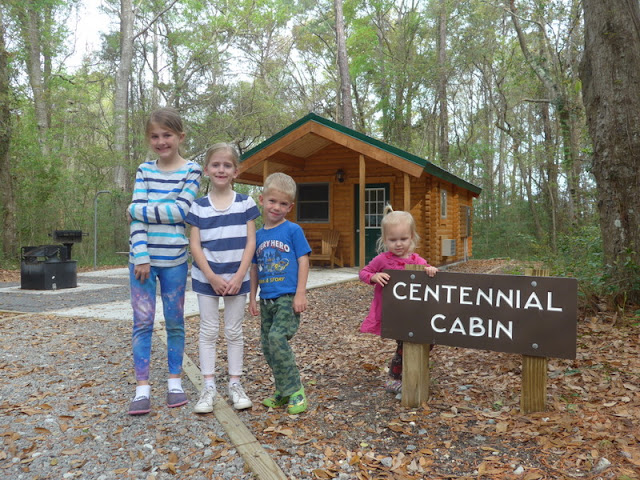 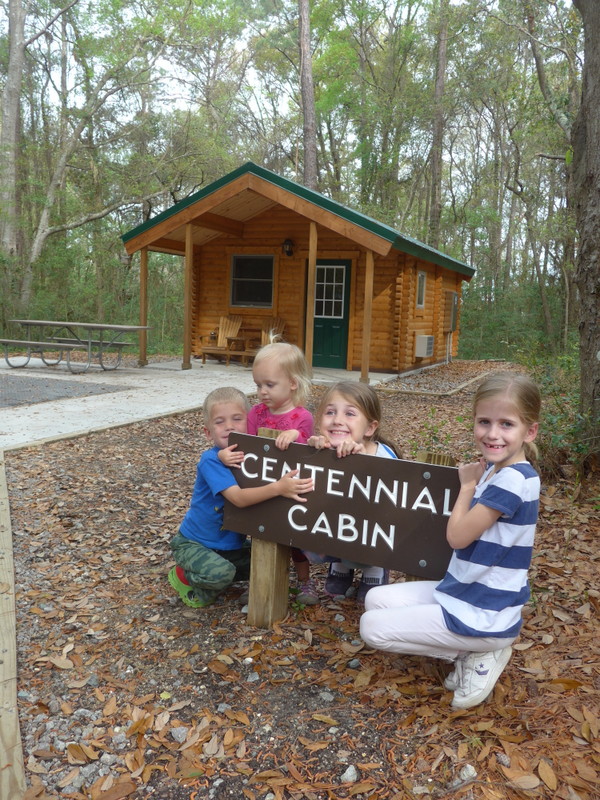 Then we had to take Daddy along the trail. The kids wanted so badly to show it to him. He tried carrying Zoë but she wasn't very happy about that arrangement. 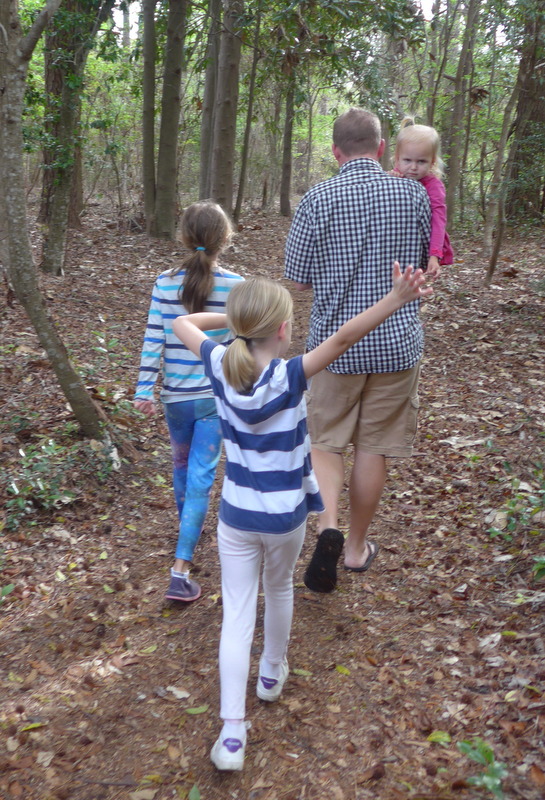 It's not the greatest picture, but here she is reaching over his shoulder and crying, "Momma! Momma!" He did his best to distract her but eventually she ended up being my hiking buddy (and Benjamin went up with Andrew). 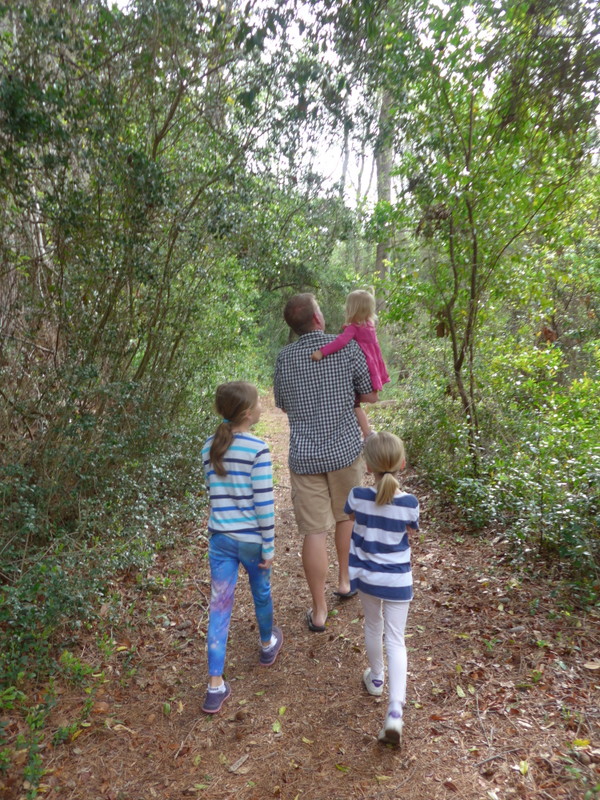 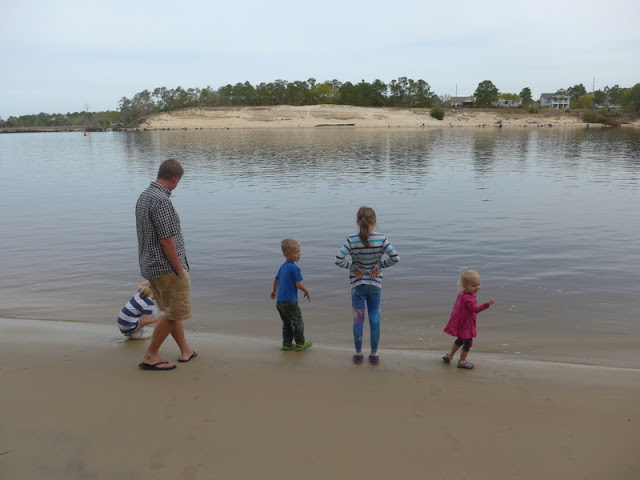 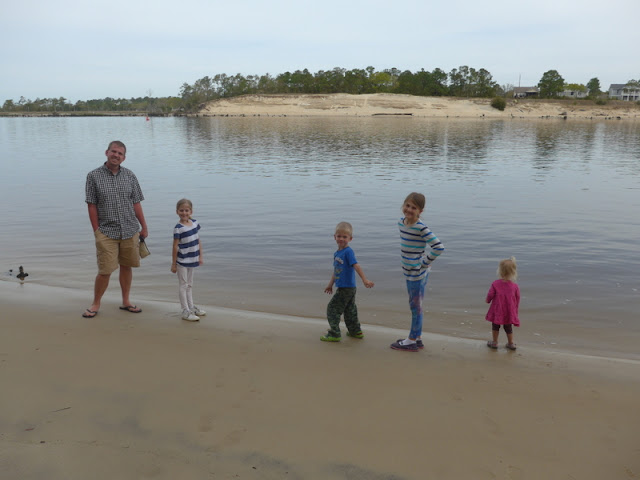 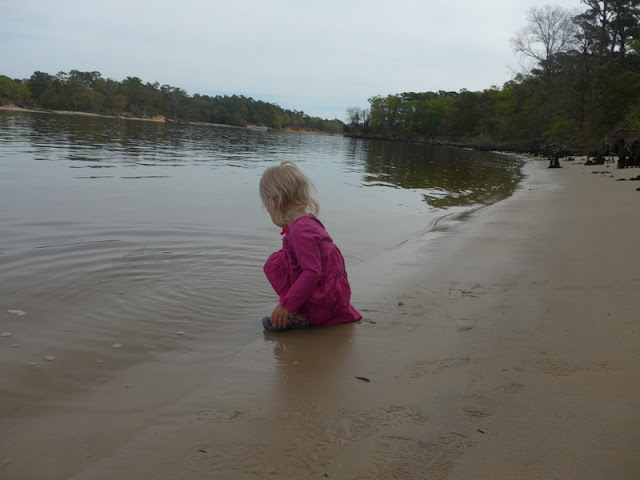 We're excited to try to get in a few more hikes this summer. Hopefully the program will spread to more places because although it's rather popular out here on the east coast, sponsored hikes are rather sparse in the west...
Posted by Nancy at 12:15 AM