I stayed up late last night to make muffins (from a package, thank you very much (we're in survival mode here with Andrew out of town)) so we would have something to contribute to the brunch after our annual ward Easter egg hunt. Though, in all honesty, I don't think you can really call it brunch when you begin at 9 o'clock in the morning. Because clearly that's still breakfast!

My kids were begging for more food by noon.

A friend's baby shower "brunch" was at this same time just last week. I didn't go because Zoë and I were quite sick (technically we are both still sick but not as sick as we were last week). But I thought the same thing. 9:00 isn't brunch.

Wikipedia agrees with me: "Brunch is a combination of breakfast and lunch eaten usually during the late morning to early afternoon, generally served from 11 am up to 3pm," (which means that, technically,  Robert Alan Palmatier's Food: A Dictionary of Literal and Nonliteral Terms agrees with me (he is a professor emeritus of linguistics so I pretty much trust him here)).

It's fine to have an activity at 9 o'clock in the morning, but, friends, let's just go ahead and call it breakfast (or a motley assortment of sugary desserts; I brought muffins so I'm just as guilty as everyone else, but I'm more of a last-night's-leftovers kind of gal in the morning, personally. I want things like...burritos...or something like that, not sugary stuff like cereal and muffins and juice).

Breakfasting (or brunching, I guess (....but not really because 9 AM)) aside, the kids had a good time at the egg hunt. This year they only split the kids into two groups: the babies and the big kids. This meant I was able to send all three of the older ones off together (with the littlest of the big ones feeling so proud at being included in the 'big kid' group) so I could focus on Zoë (and cross my fingers that the girls could/would keep their brother in line): 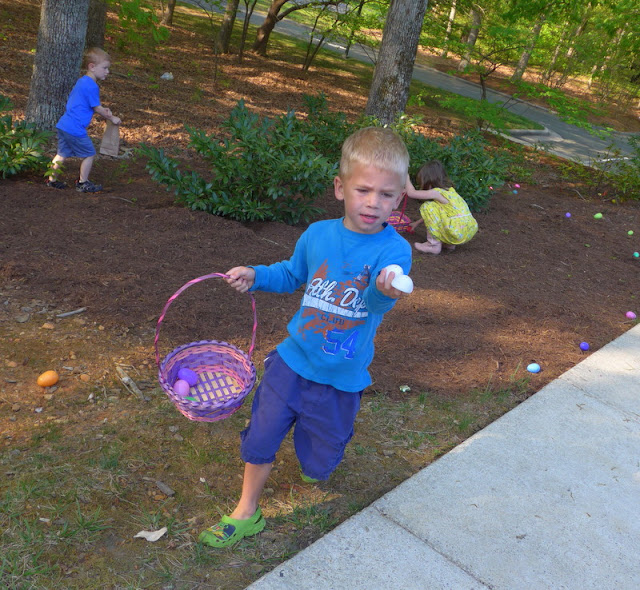 By the time Zoë and I had dropped off the kids where they were supposed to go and made our way to the baby area it was mostly picked clean. Zoë didn't mind. She thought picking up eggs from the grass was a really weird concept. I couldn't even get her to move at first. 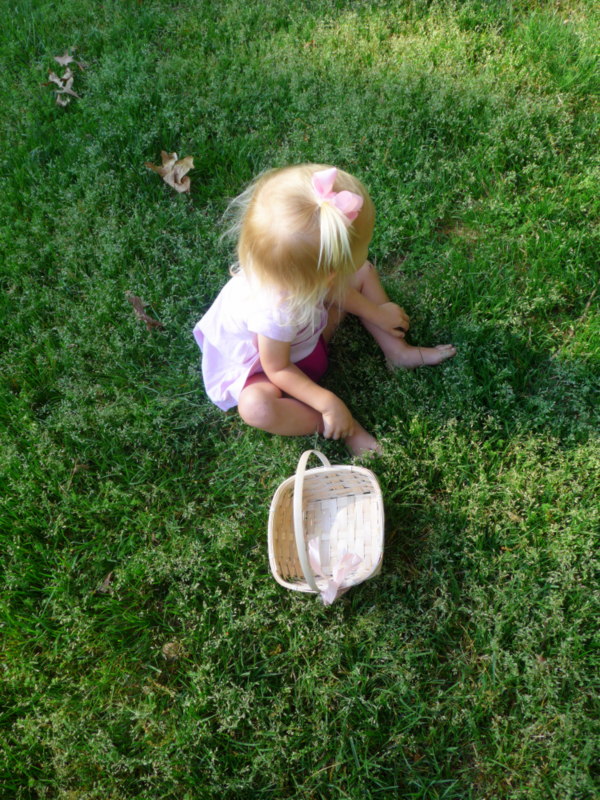 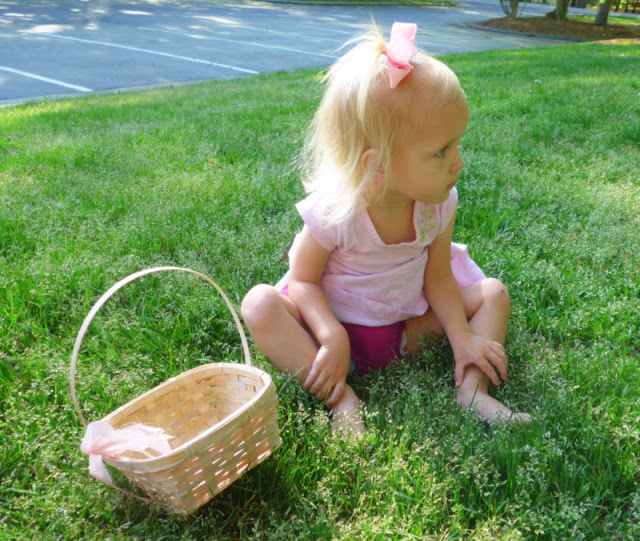 Then I told her the eggs had candy inside and she stalked off like, "We'll see about that!" I swear she picked up an egg just to prove me wrong. 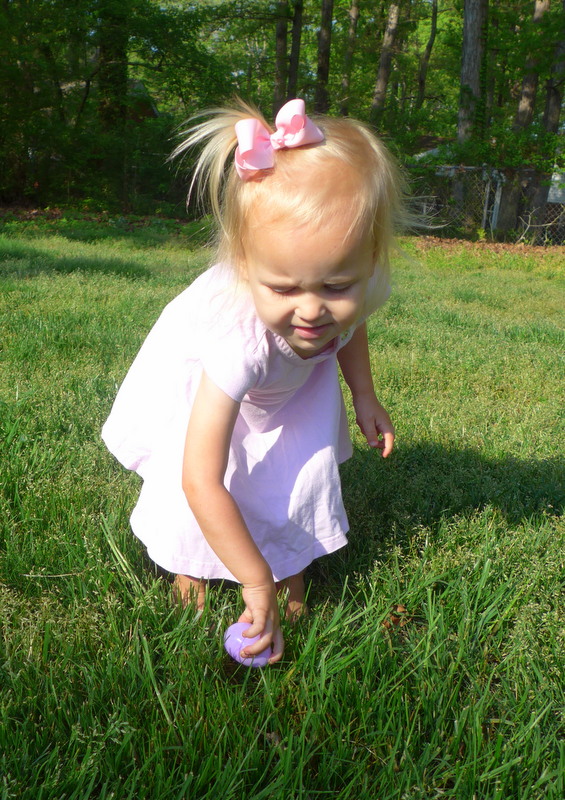 She found one egg, popped it open and... 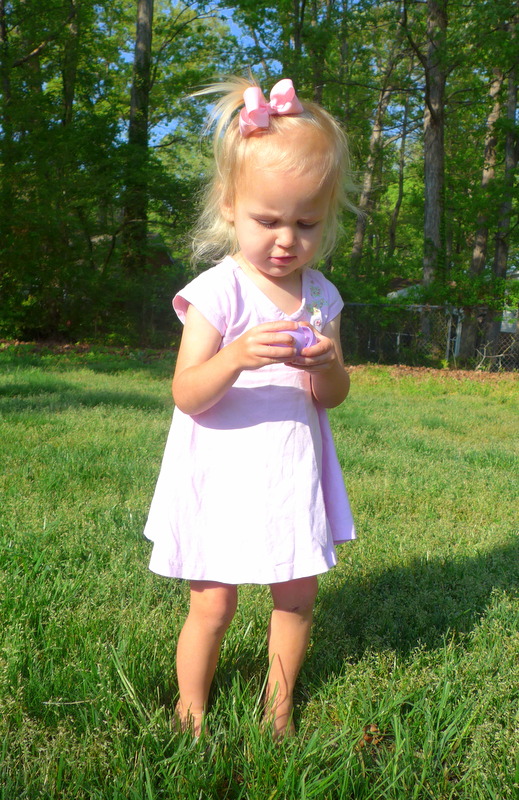 ...pleasantly surprised (What?! Mom was right about something?!) plopped down in the grass to consume her treats. 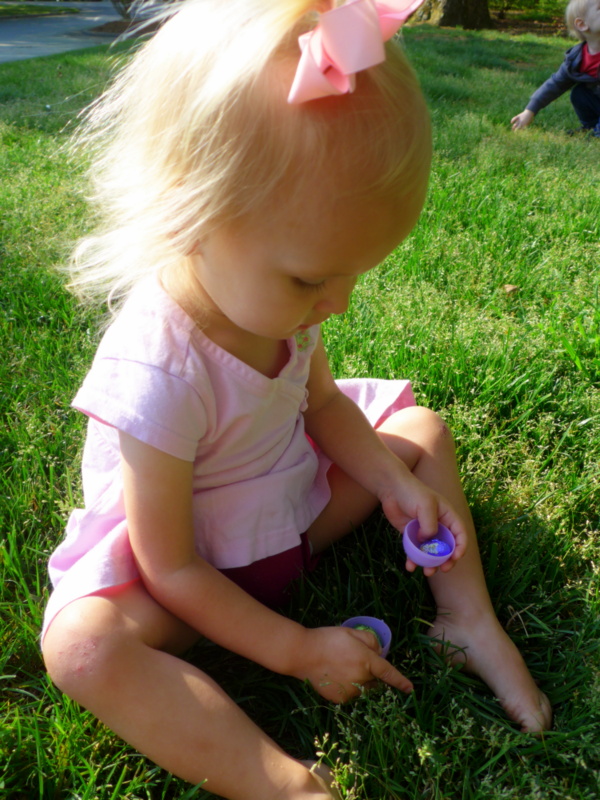 "Zoë you can go find more," I prodded.

"Uh-uh!" she said, but eventually she decided she'd go pick up a few more eggs. 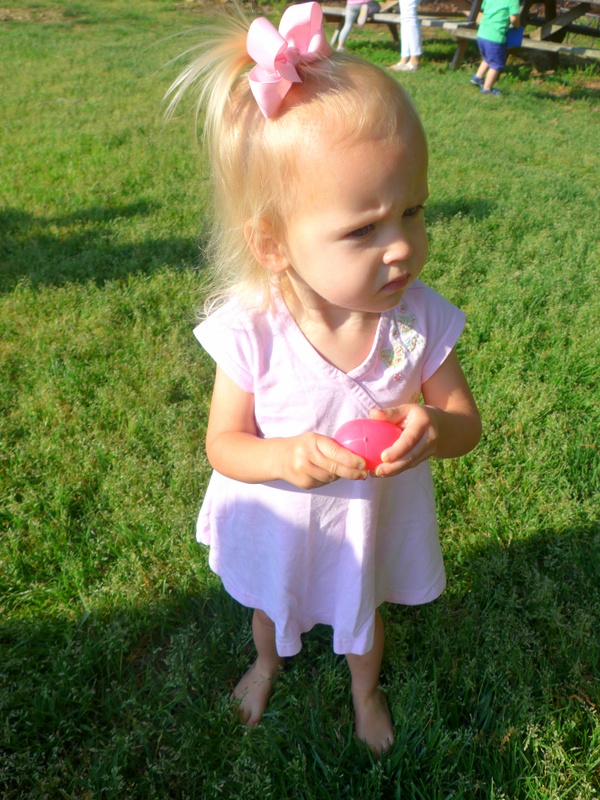 She managed to find four. Here I am saying, "Put it in the basket, Zoë," while she's sucking snot off her upper lip and saying, "Uh-uh!" Not that she's at all contrary (not ever). 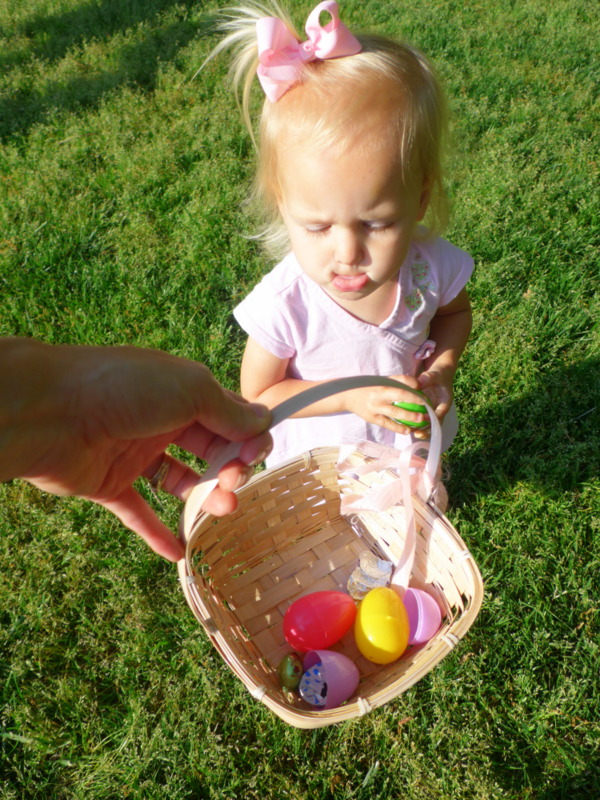 I don't think she smiled the whole morning. I really thought she'd be more excited about the whole process. Oh, well. 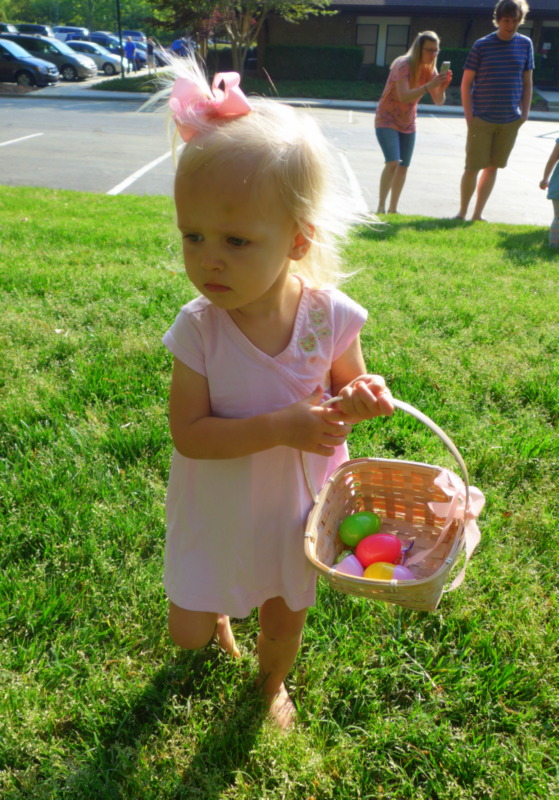 With no more eggs to be found in our area, we headed back to check on the big kids, who'd all found more than their quota (10 eggs) and were busy looking for less fortunate souls to share with. 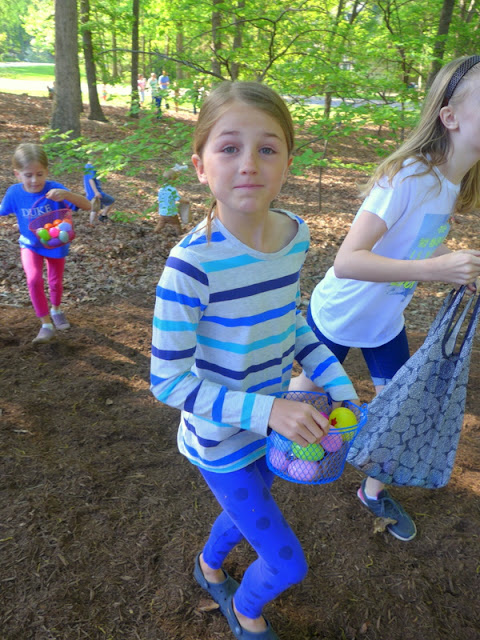 Miriam and her friends saw that Zoë only had four eggs and quickly filled her basket with eggs from theirs before skipping off to increase the bounty of others. 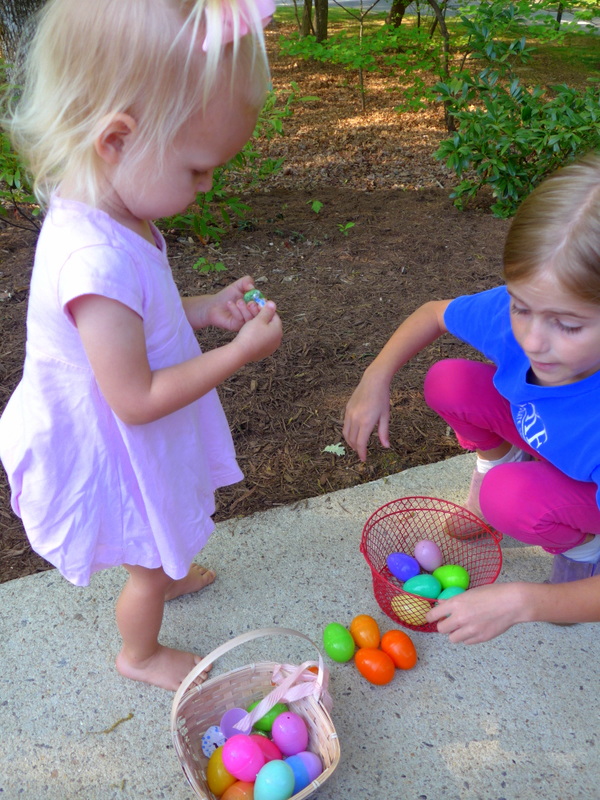 Miriam found a double egg, which she thought was so cool she posed with it twice: 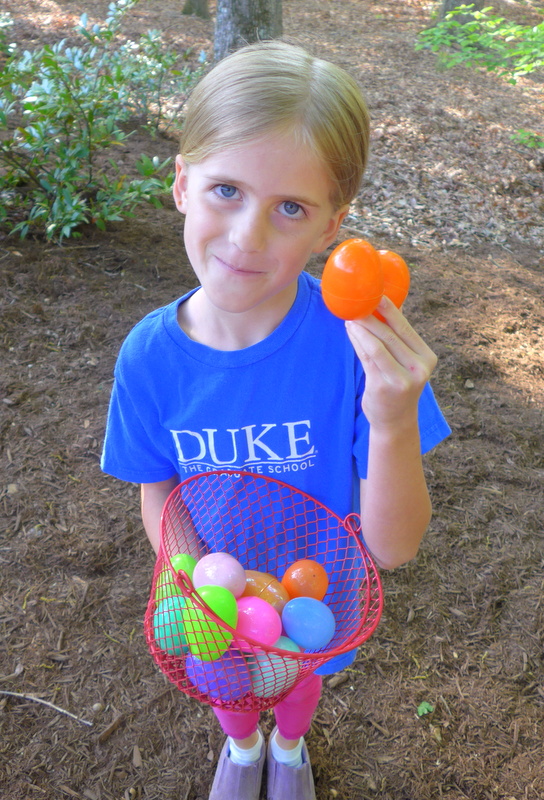 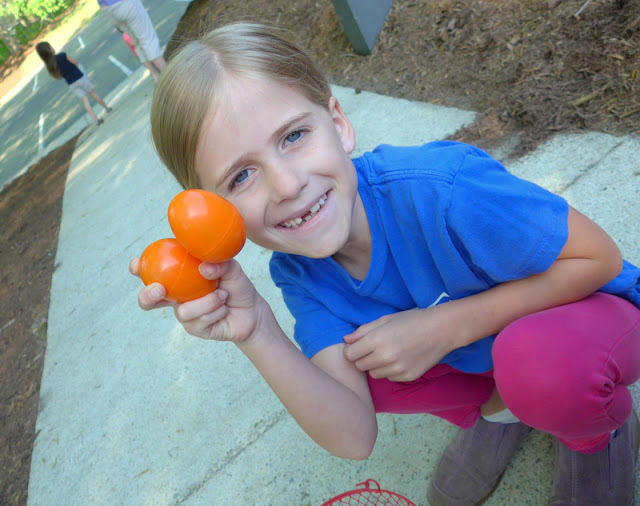 Benjamin was probably the most excited (of my children, anyway). I should have been following him around with the camera (though I guess Zoë needed the most supervision).

Here he is shoving a chocolate in my face and whimpering, "Mmmm..mmmmm...mmmm?" which is the universal language for, "Mom, please open this candy for me!" 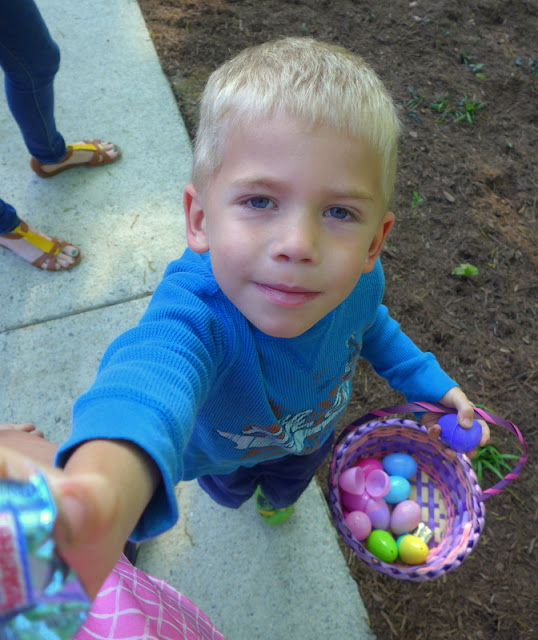 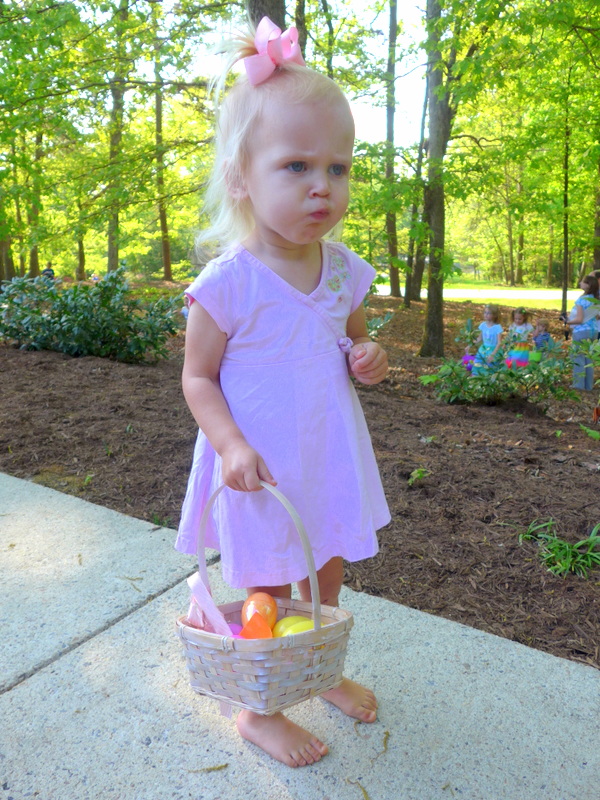 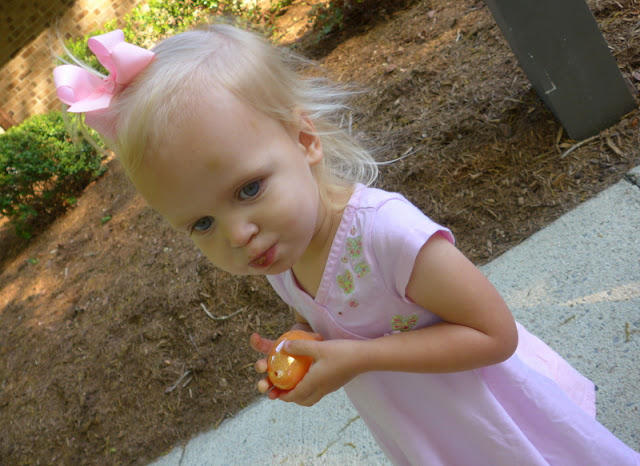 Here are the three younger ones posing for a picture together (though obviously checking out the contents of Benjamin's basket is far more interesting than looking at mom): 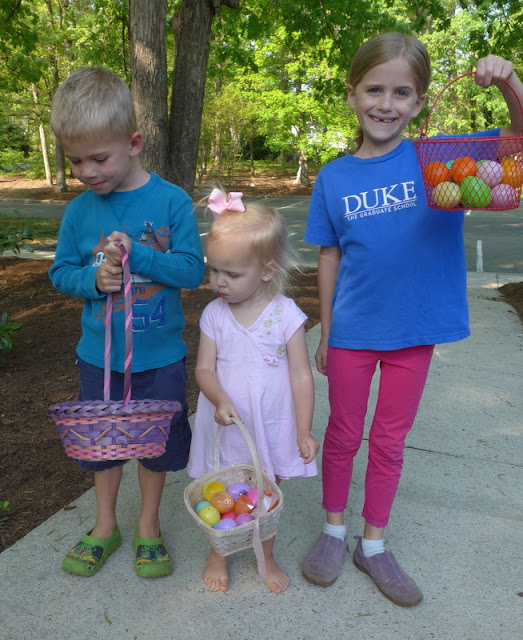 Here's one more of Miriam: 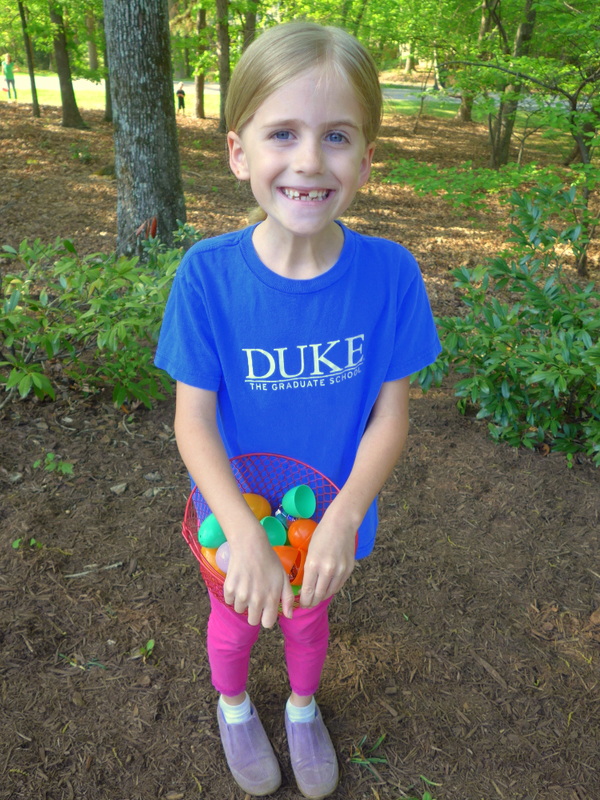 And one more of Benjamin: 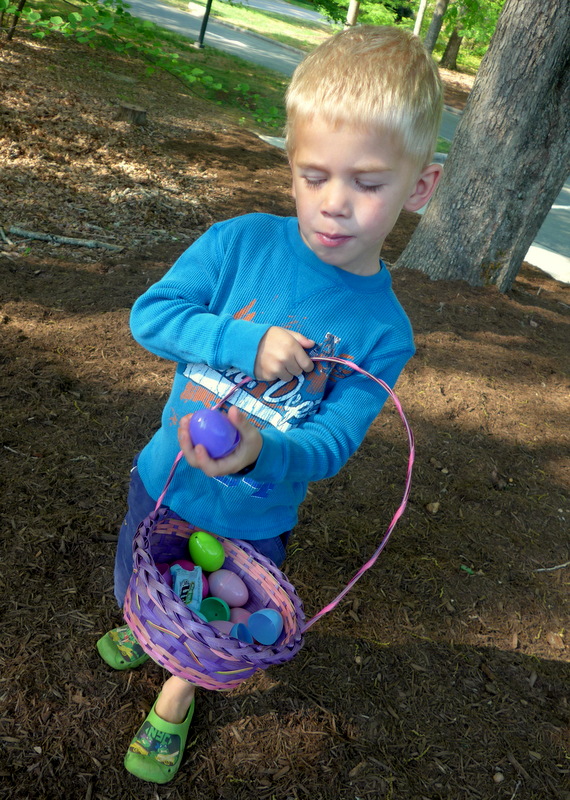 And here's one of all four kids together. We're very lucky to have it. When I asked them to all stand together, Rachel rolled her eyes and said, "Can't you just photoshop me in?" But she did manage to smile for it (after I asked her to a handful of times). 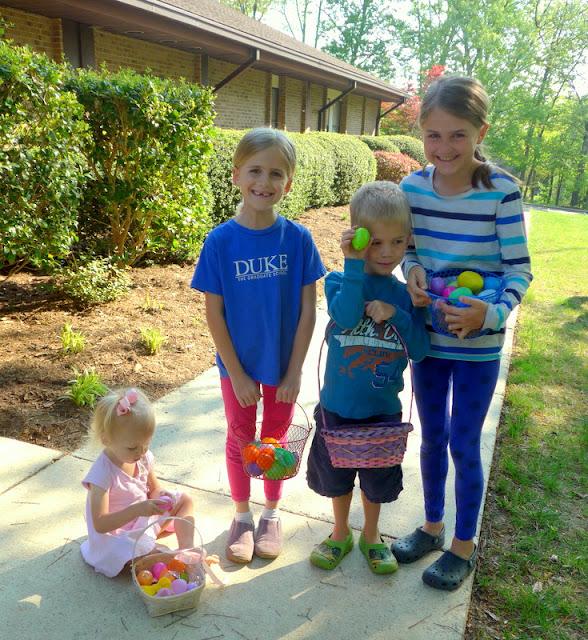 I also snagged this picture of her, you're welcome: 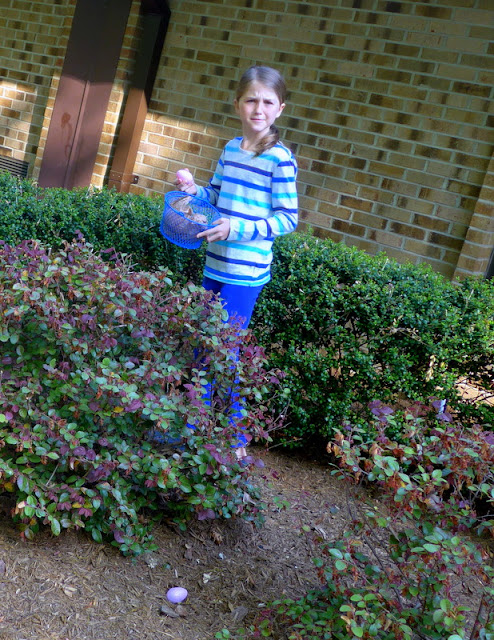 While we were eat brunch breakfast the chorister went to the piano and started playing the song The Miracle (by Shawna Edwards) on the piano and the children kind of spontaneously stopped eating and began singing, which was kind of sweet. I was glad when she called them all over to the piano to more formally sing the song for everyone, though, (even though they'll be singing it tomorrow during sacrament meeting) so we could hear the words without kids choking on bites of muffin.

We were almost home in time to go to our neighbourhood egg hunt (it started at 10:00; we got home at 10:15—which is definitely too late to arrive for an egg hunt) and spent the rest of our morning colouring eggs. All in all a great morning.
Posted by Nancy at 4:30 PM