Rachel's field day was much like Miriam's, only with older kids and a few different activities. Our first station was the water tag station. Rachel got a turn being one of the attackers (which made Miriam rather jealous, since Miriam didn't get a turn when she played): 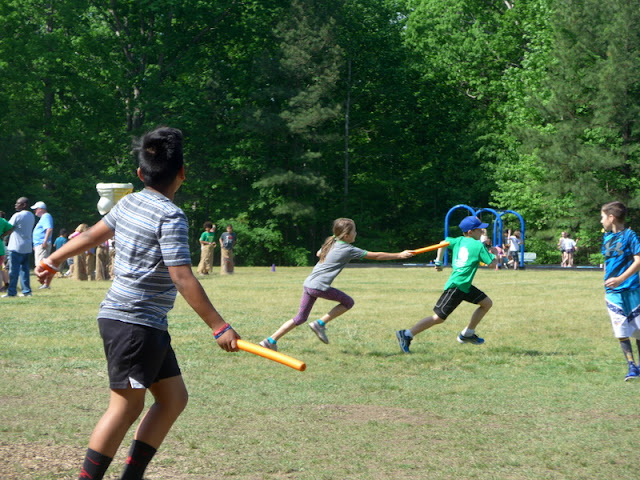 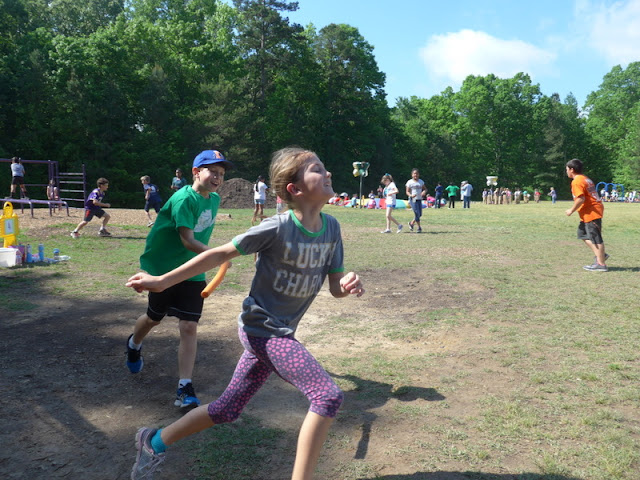 Then there were parachute games and then potato sack races: 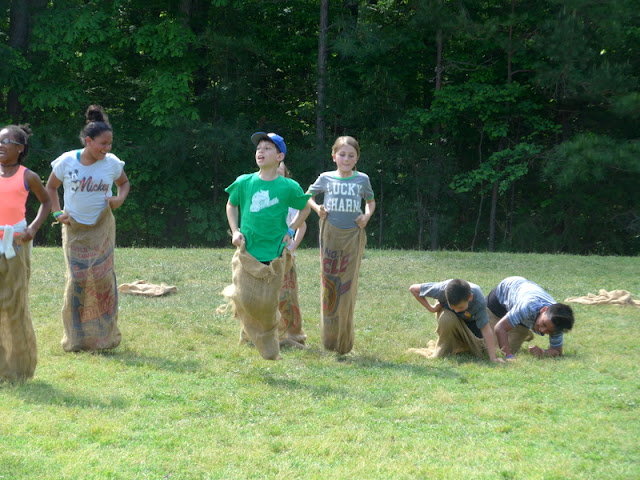 When I asked Zoë if she wanted to try out sack racing she plopped herself on the grass for a good cry. Because...how dare I? 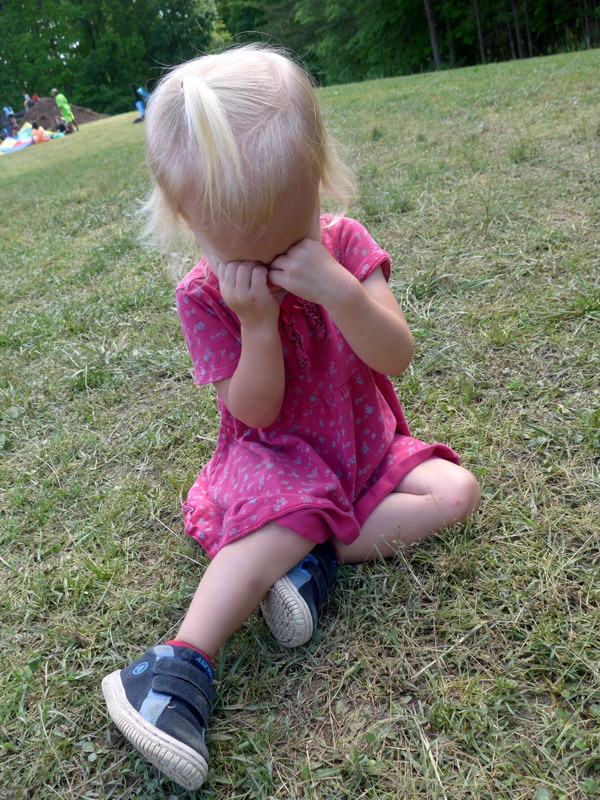 Too much field day for Zoë, methinks.

Here's Rachel doing the candle pose at the yoga station: 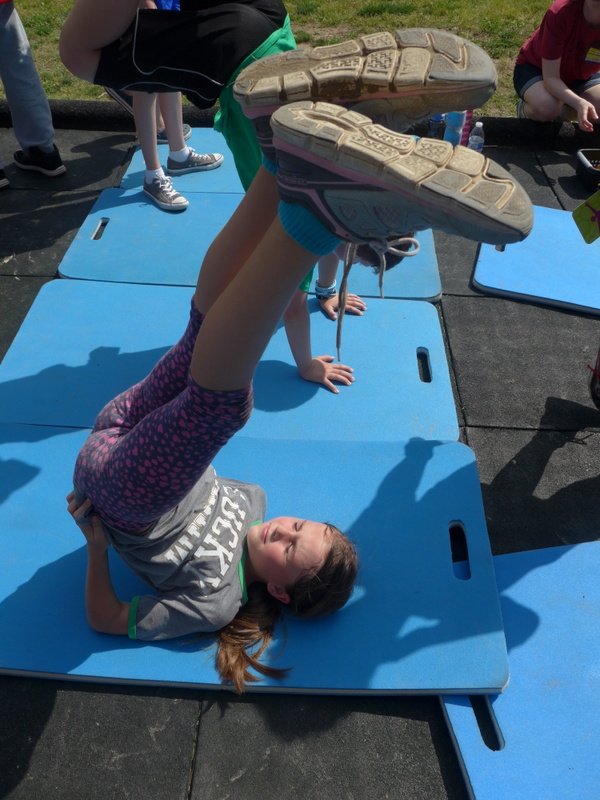 Instead of bubbles the kids played a "hedbanz" game, where the kids took turns holding cards to their forehead with a word on it that everyone else gave them clues for. Zoë and Benjamin found this rather disappointing because they loved the bubbles yesterday.

Next up was the "steal a hoop" game, where if you tossed your beanbag into a hoop you got to collect it for your team. 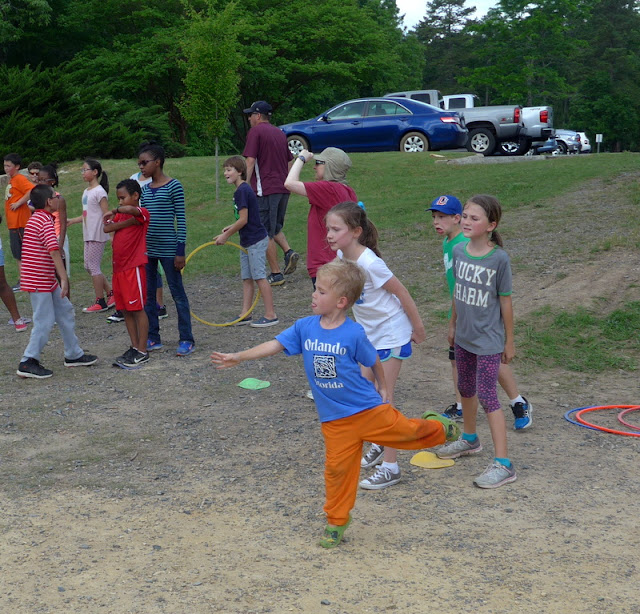 Rachel has impeccable aim! She only missed a couple of times! 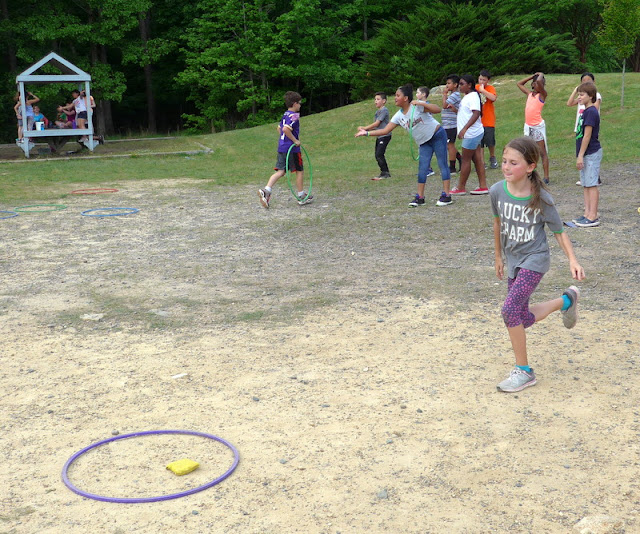 Here's Benjamin and Zoë having fun with some of the extra hoops: 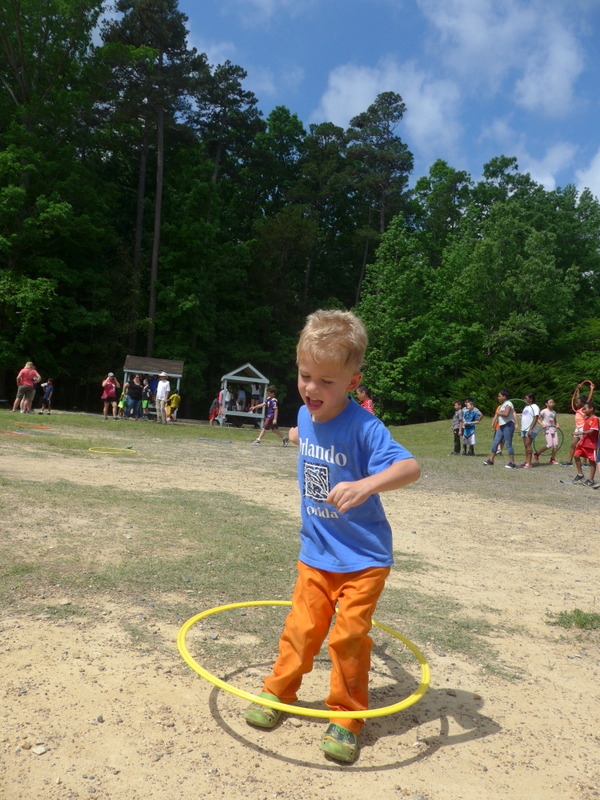 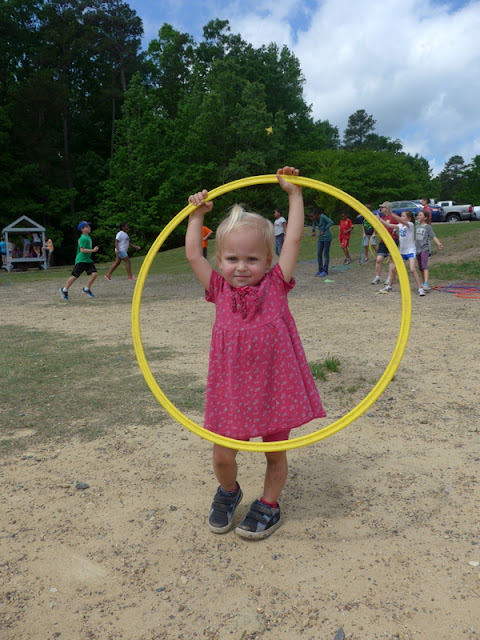 And here's Zoë tossing a beanbag to Rachel: 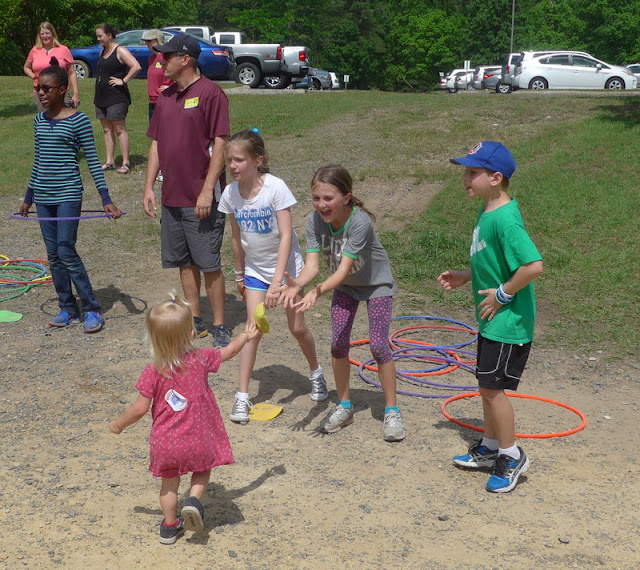 Zoë's happiest moments were spent climbing all over the railing (which I think is technically against school rules but technically she's not a student, so...): 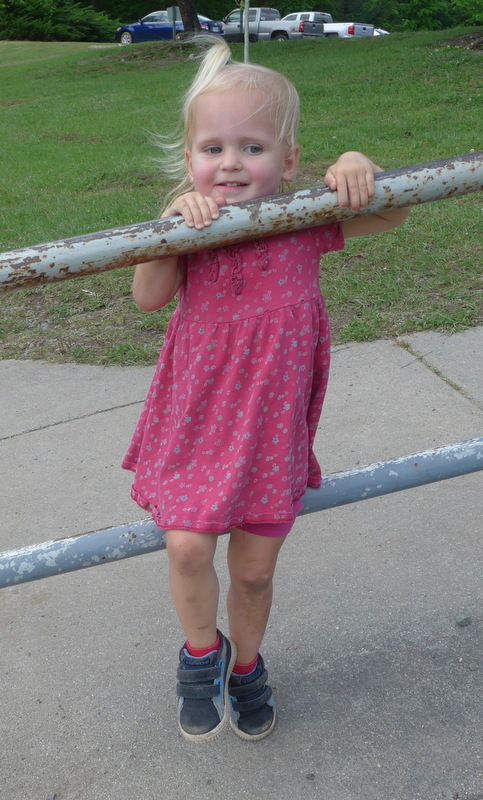 The frisbee throwing was one of Benjamin's favourite activities, once again. He's been asking a lot about why we don't have big frisbees like that at our house (good thing he has a birthday coming up). 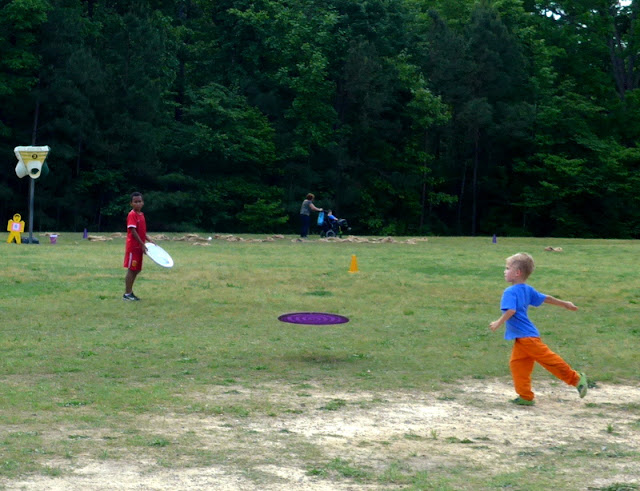 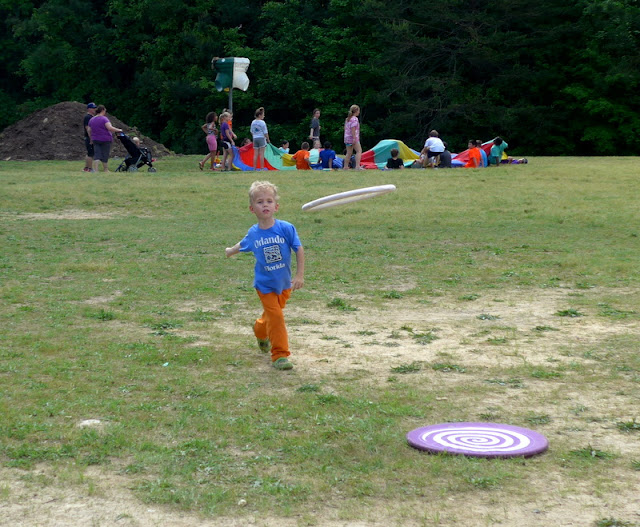 Rachel had fun tossing a frisbee with some of her friends: 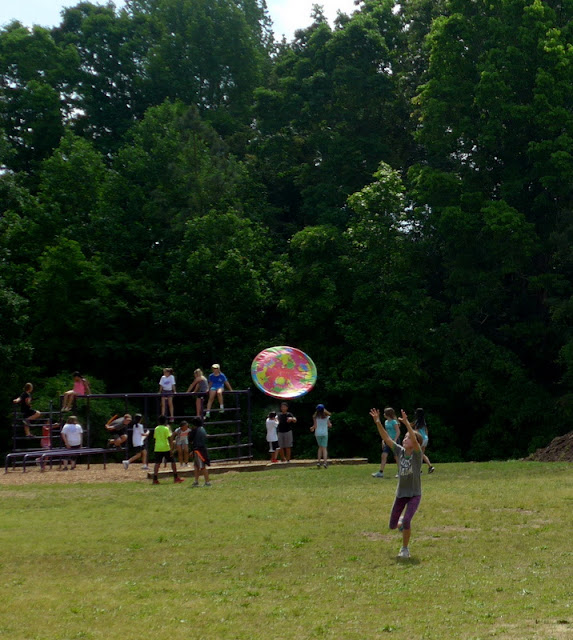 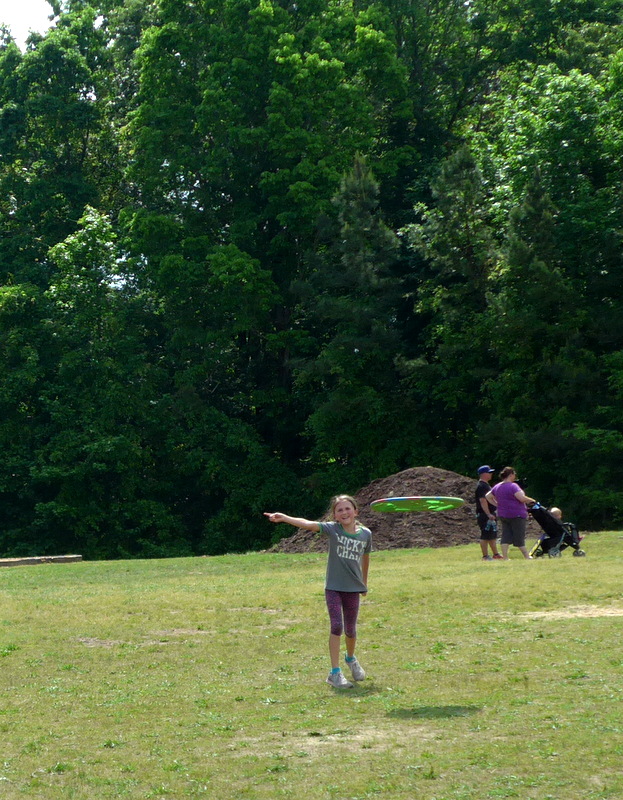 She was so excited when she finally caught it! 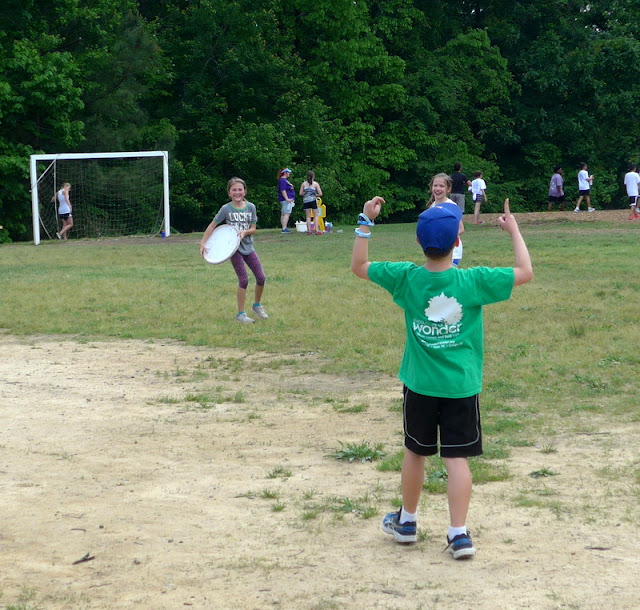 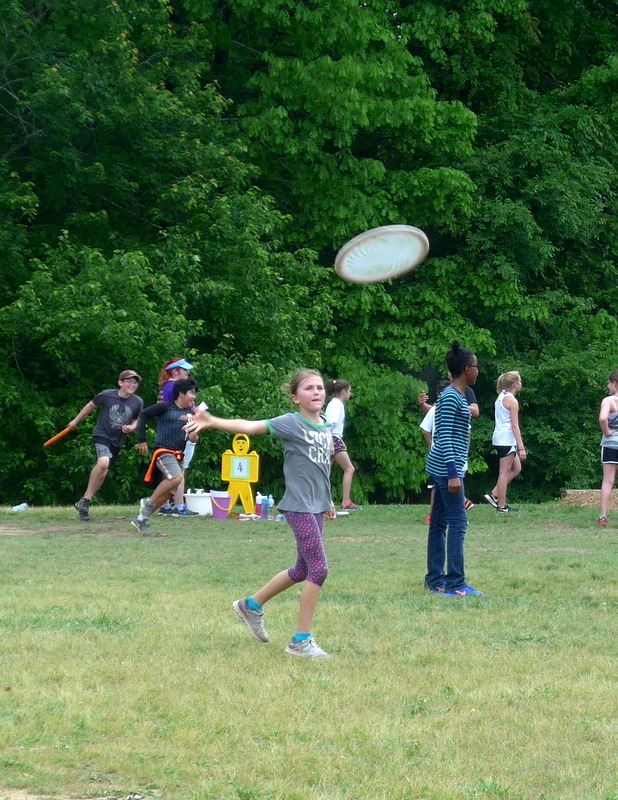 I was thinking today about how much Rachel's grown while we've been here. Her first field day she was in grade one and was so tiny (all three of the kids were, actually). By her second field day she'd moved to the 2/3 hallway and seemed like such a big kid. By her third field day she was already in the 4/5 hallway (because they had one too many grade three classes to fit in the 2/3 hallway), but now she's legitimately in the oldest group at the school!

It's crazy how fast it's gone, but it's been fun to watch her grow up—and to watch her friends grow up as well.

Anyway, onto the last couple of stations...

We had a bit of a cool-down at the cup stacking station: 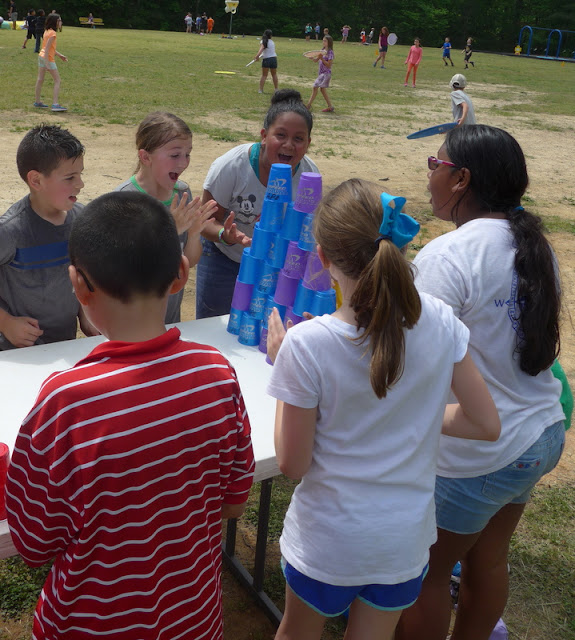 I did not realize cup stacking was an actual sport until I was cleaning up and saw that all these cups were labeled "official speed stack" cups. Who knew?

Our very last station was limbo: 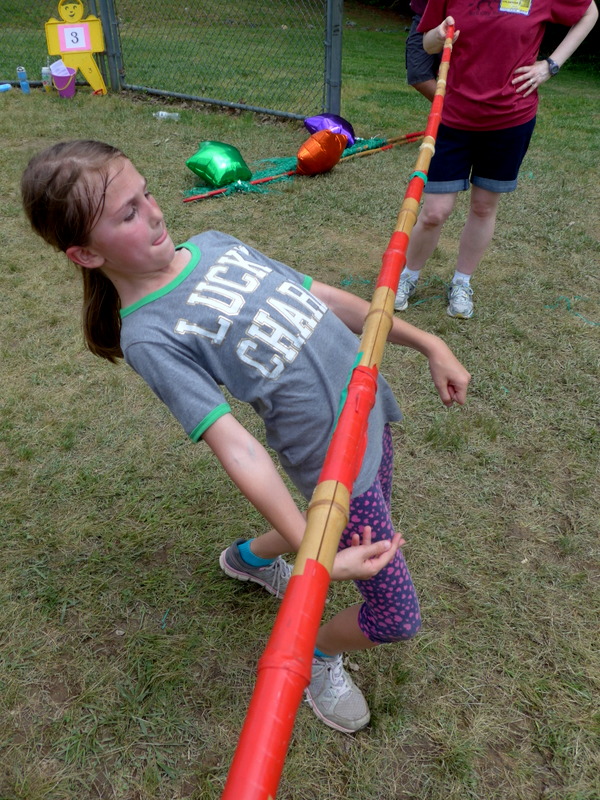 Some of us understood the rules better than others: 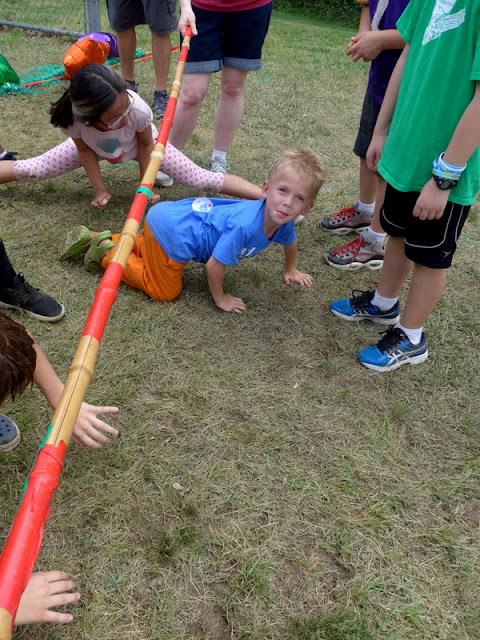 Actually, because the kids are so tall now (especially compared to Benjamin) that Benjamin was able to simply walk under the stick the first several rounds before we finally dropped the stick low enough to make him duck.

We had a lot of fun! I'm so glad I'm able to take my little ones when I volunteer at the school (though I can't do everything with them—for example, haven't signed up to be an EOG (End Of Grade testing) proctor because they demand silence from the whole school—I'm grateful for the many things that I can do with them). I think it gets them excited about the idea of going to school and the kids seem to enjoy seeing "the babies." And I enjoy getting to spend time with my bigger kids during the day, too!
Posted by Nancy at 11:08 PM