We managed to make it to school on time for Miriam's field day, rolling (pulling for some of us (Benjamin)) out of bed at 8:20 and leaving the house at 8:45. Phew! I forgot the camera, though, so all the pictures are from my cell phone, which means they aren't fabulous.

This year the kids went to each station class by class (in past years they've split the classes into smaller groups). I really liked it this way. Sometimes finding enough volunteers can be tricky! This way we had the teacher plus whoever showed up to help. I stayed the whole time, another parent was there for about half the time, and someone's grandma showed up to help for a bit the second half. It worked out well, and the kids all had fun together.

Our first station was a pass-the-hoop game where the kids stood in a circle and...passed a hoop around. They had to step through the hoop to pass it on. 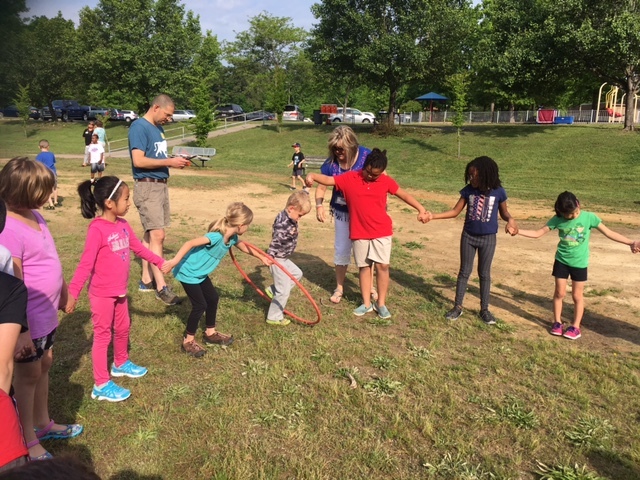 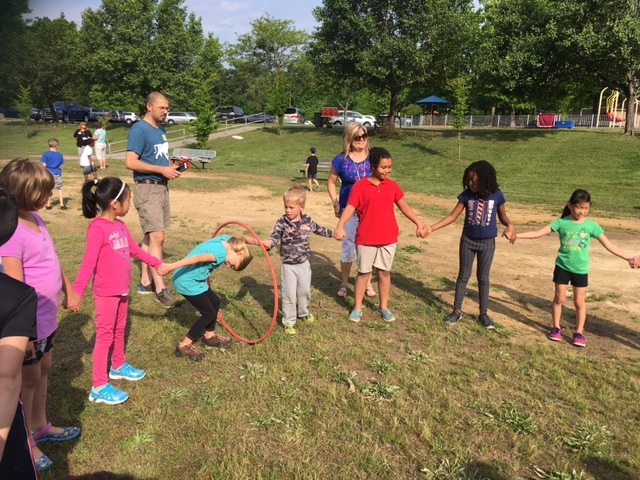 When the kids mastered this we added more hoops, some smaller and some larger (they were all able to fit inside one another), going in either direction. At times we'd have one person working their way through three hoops, passing them to one side or the other. 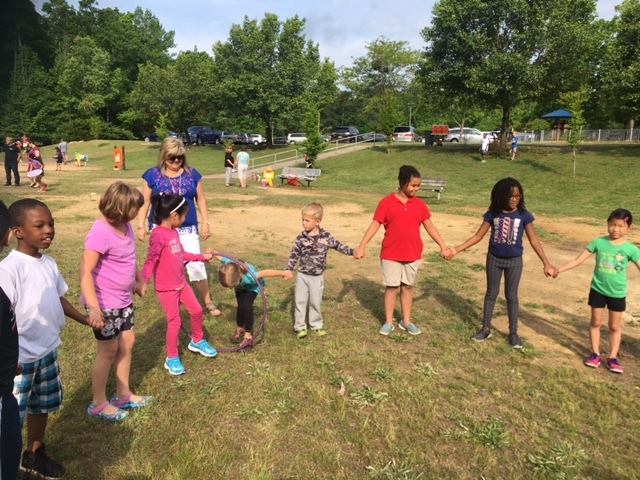 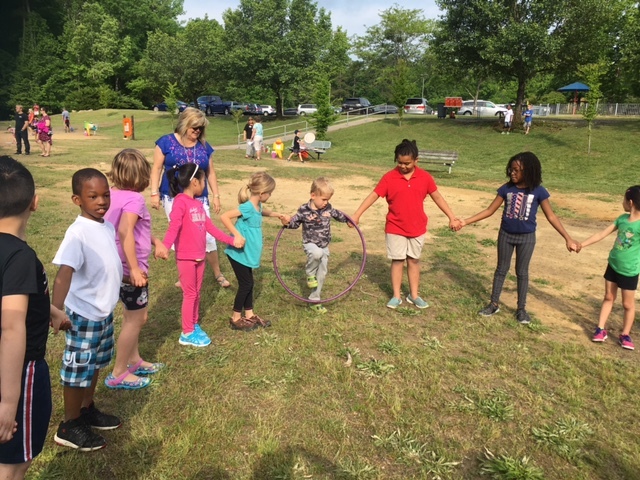 Then there was a limbo station (I didn't take any pictures) and a water tag game (the "attackers" had little foam tubes that they would tag the runners with, who had to freeze with their hand up in the air, and the "rescuers" had spray bottles and would go around and spritz the frozen runners (unless they had their hands in an X, and then they would just tap them to unfreeze them because that meant they didn't want to get wet)). I also didn't take any pictures of that game, but the kids had fun.

Our next station was the parachute. Here's Benjamin taking his turn "walking on the clouds": 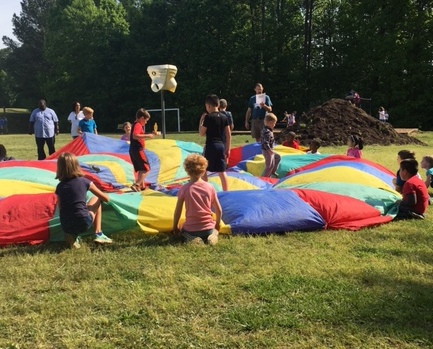 And here's the "climb the mountain" game (you can see Miriam and Benjamin on the right): 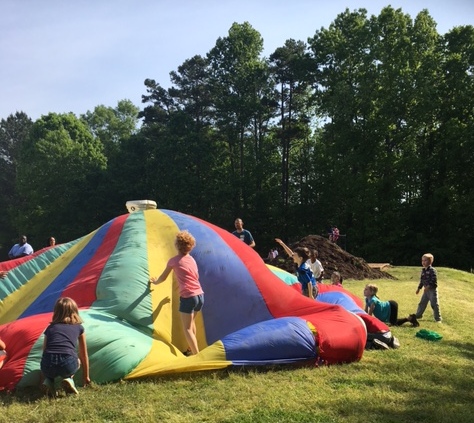 Here's Miriam enjoying a turn in the middle: 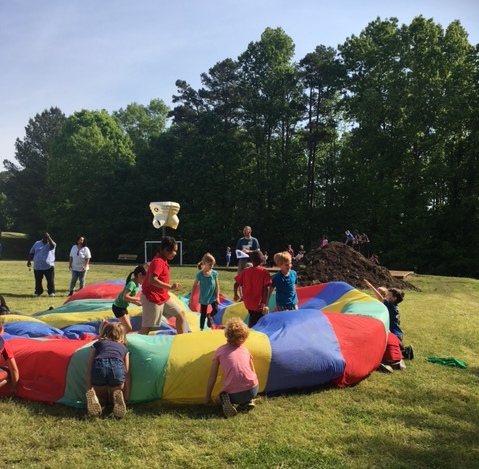 Zoë was being a grouch so I sat on the bench and cuddled her during the parachute games. Sometimes, despite naming her such a beautiful name, we call her "Zoger" or some other rendition of that. Zoger-Kroger. Zogi. Zog.

In my mind I have always spelled this "Zoger." But the other day Andrew said, "She sure acts like an ogre sometimes, so that nickname fits her."

Perhaps I should be spelling it Zogre.

She can be a sweet little girl, but she also packs a serious grumpy attitude. It's nothing a cuddle session can't cure. But, man. She can be a real (z)ogre at times!

Our cuddling continued during the next game, where the children had to toss beanbags into hoops to "collect" them all.

And then there was a yoga section, which I also didn't get any pictures of because I was too busy helping the kids figure out various poses (there was a basket of pose cards that the kids could choose to try).

The next game was called "waist basket." The kids each got a basket to wear around their waist and then they got a piece of "garbage" (a bean bag) and they had to try to toss their garbage into a partner's waist basket, who would sometimes have to jump in order to catch it. It was pretty funny to watch. 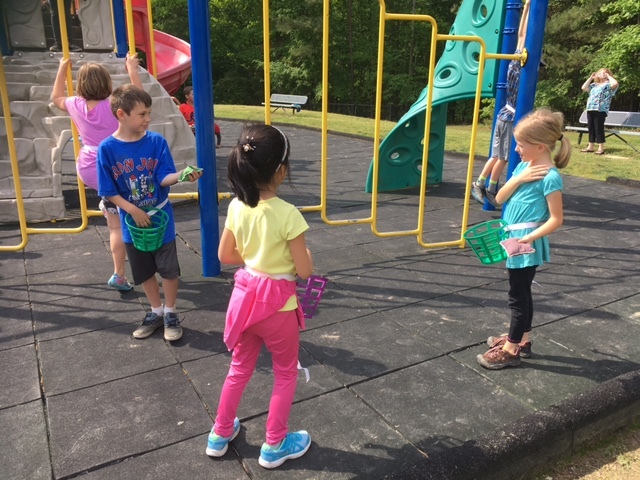 The next station was the bubble station, which is mostly just a resting station. The kids had fun, though, of course. 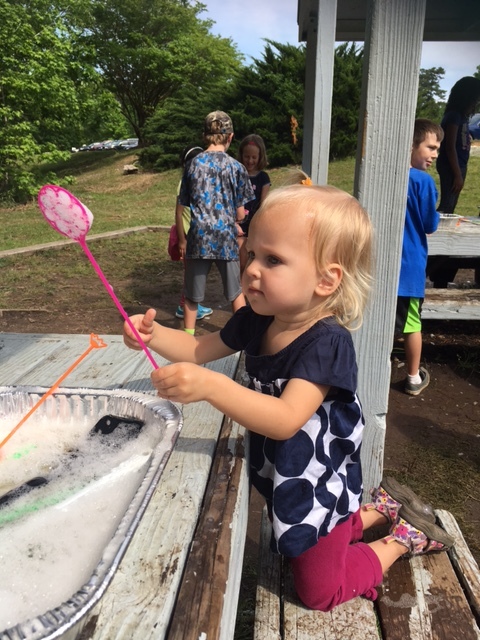 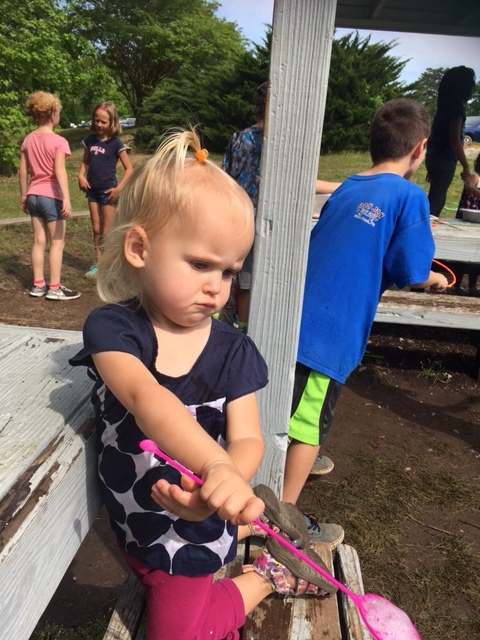 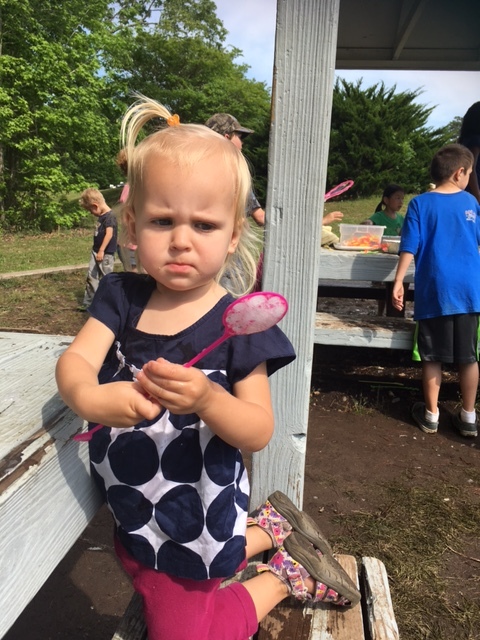 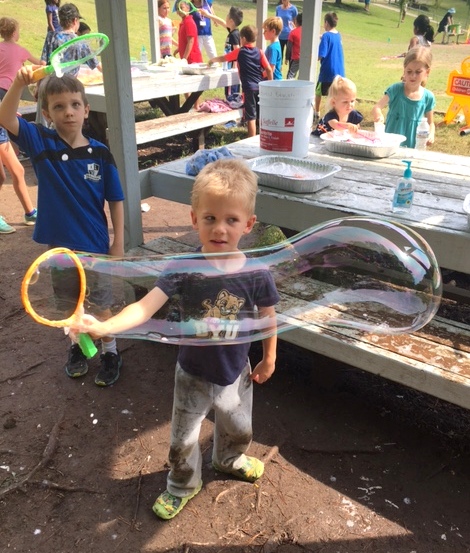 The weather was perfect for field day, honestly. The weather cooled down quite a bit with our days-long rain storm and it hasn't quite warmed up to where it was, so it was a perfect temperature for spending hours running around outside. However, everything is still pretty damp and, therefore, parts of the field were extraordinarily muddy. 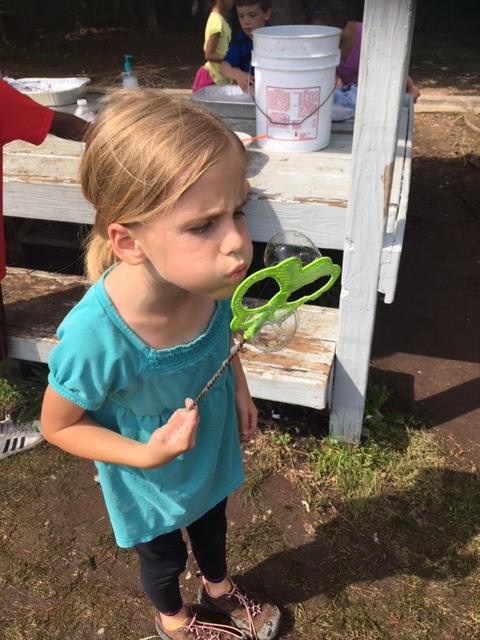 Benjamin had to take one more turn with the big wand before letting Miriam have a try: 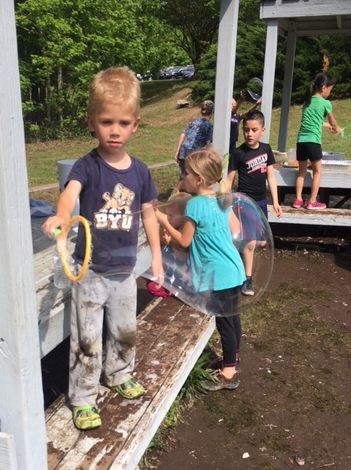 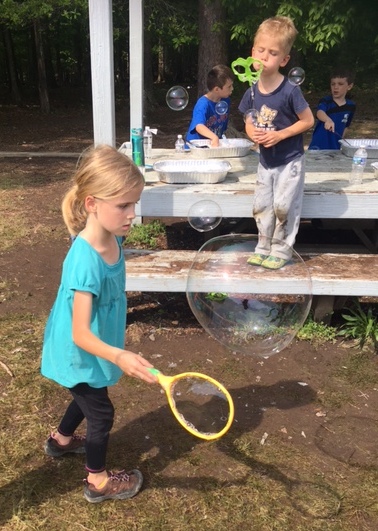 And her second attempt: 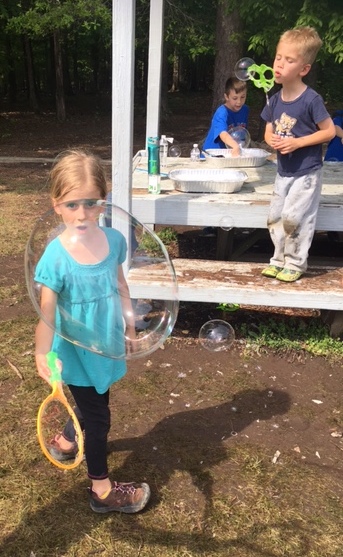 Our last two stations were air scoop ball and giant frisbees. So here are some pictures of the kids doing that: 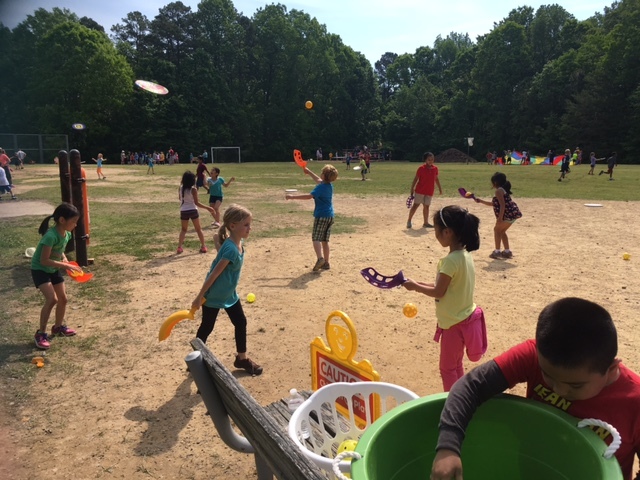 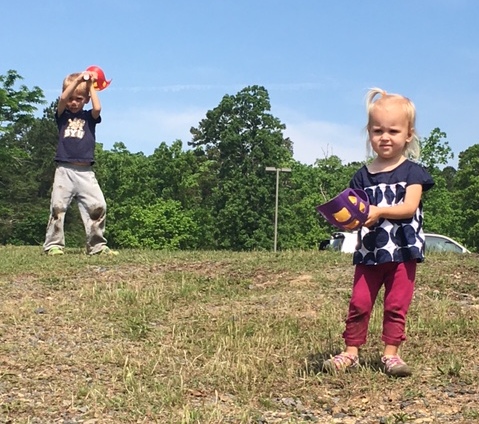 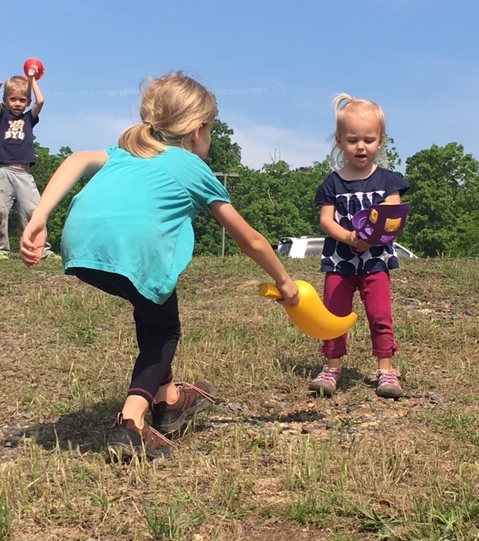 I honestly don't know how Benjamin got so dirty, I mean, it's not like he was rolling around on the ground or anythiii...oh, wait... 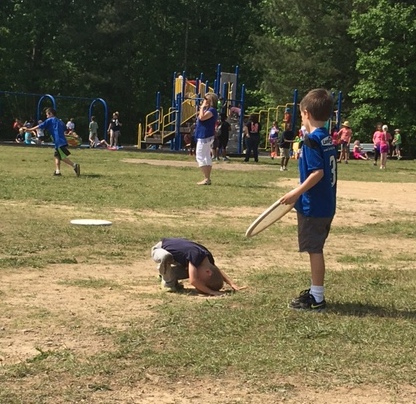 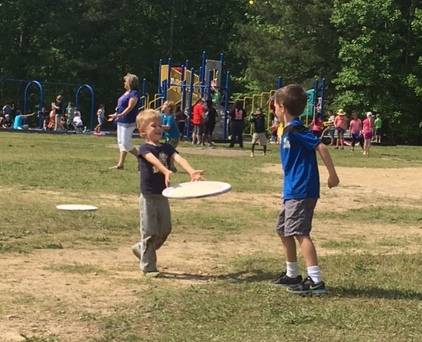 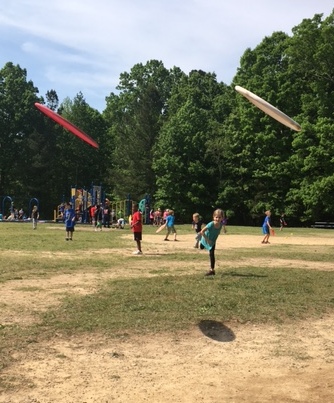 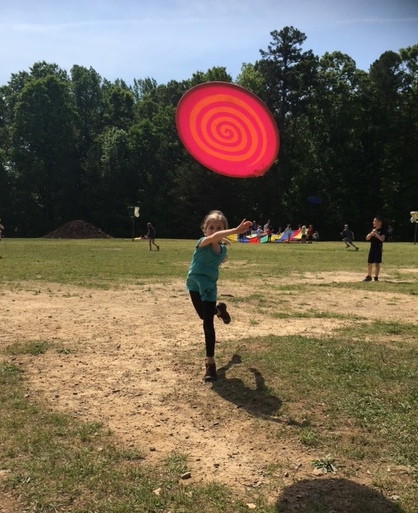 We were all tuckered out by the end of field day.

Miriam wanted me to stay for the rest of the day, but I had to get the kids home for lunch, and to have a nice long rest so we can be ready for field day again tomorrow...
Posted by Nancy at 4:03 PM