Zoë (re)discovered our dress-ups and has fallen in love with putting on costumes. Her favourite dress seems to be this pink one, which she would have worn to church today if I had allowed it:


This weekend the kids enjoyed dressing her up as either a queen or a princess and then doting on her hand and foot (so obviously she also enjoyed this game).

Here's a picture of King Benjamin (later he added a golden cape) with Queen ChaCha: 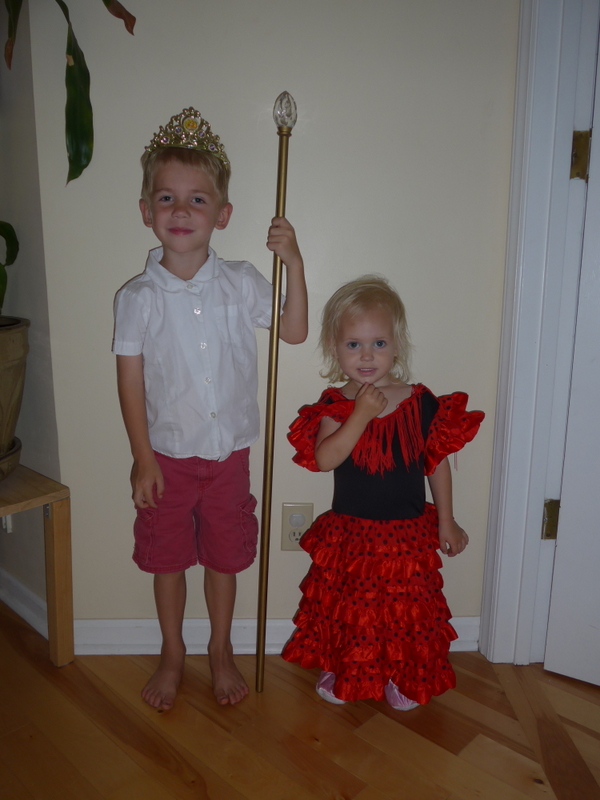 Those two fought long and hard over that crown yesterday (sigh). The sceptre is a curtain rod our neighbour Mr. Lee salvaged from a house he was working on. He noticed the kids playing in the yard using sticks as sceptres one day, told them,  "I have the perfect thing!" and ran inside to get these. The kids have loved playing with them.

In the right hands they are pretty benign, but in the wrong hands...well...you can imagine, I'm sure!

Yesterday as Benjamin was wielding his sceptre around and he told me, "This sceptre has poisonous power in it and if I shoot it out at you, you will die. Except for you, Mom, because you're one of my servants. Servants can't die because they have to keep serving."

At least now I know my place...

He also stabbed our home teacher's daughter in the stomach when they came to look at our house!! Fortunately he did it gently, but still. It was rather embarrassing. I'm fairly certain he broke a healthy number of  public conduct codes with that little stunt.
Posted by Nancy at 10:09 PM