I had my second ultrasound today. This time it was transabdominal, thank goodness ( because the one to determine the due date was transvaginal not very much fun). Baby is very clearly a boy and everything is measuring beautifully. The only thing we couldn't get a clear picture of was his face because... 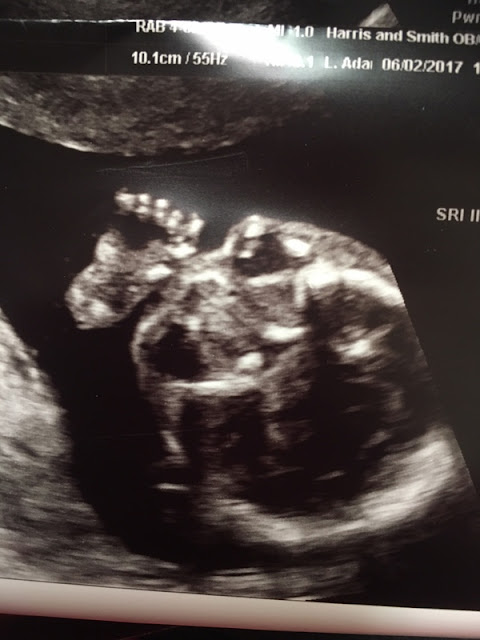 He would not move his hand. He was rolling all over the place but the hand stayed put. The technician tried over and over again to get a picture of his face and then said, "You know, I think he might actually be sucking on his thumb. A lot of times it just looks like it because the hand is up there, but this time I think he's actually got a hold of it."

This means I'll have to have another ultrasound (doctor's orders).

After the ultrasound I texted Andrew.

We're not naming our baby Ichabod. It's a name I came up with to tease Andrew about in the hopes that he'll just give me my own why when I make a serious suggestion. See, he's taken to refusing to discuss baby names until we know the gender. "Wastes brain cells," he says.

So I came up with the name Ichabod for a boy and Gertrude for a girl.

We were reading scriptures a few weeks ago and came across the name Ruggles in D&C 75, a name everyone found rather amusing. It was so amusing that it became Ichabod's middle name.

Ichabod Ruggles for a boy and, for a girl, Gertrude Salmonella.

I had to come up with a disgusting, yet pleasant-sounding middle name because Rachel was actually all over the name Gertrude—we could call her Gerdie!

We also have been joking that since we aren't actually going to use the name Ichabod, Emily and Morgan should consider it—because then the baby would be Ichabod Crane(r)! How perfect is that?!

When I finally, finally came home from the doctor's office (my appointment took forever today; we're dealing with a huge insurance mess) Benjamin and Zoë ran outside to meet me.

"BOY!" Zoë said (evidently all the talk about boy or girl sunk in deep with her).

Poor Benjamin was hoping for another sister, but I have a hunch he will appreciate having a brother in the not-too-distant future.

"The baby can't be in my club!" he said. "I'm starting a Benjamin and His Sisters club and it's going to be me and Zoë and Rachel and Mimi. No brothers allowed!"

Later he said, "I am so mad at the doctor for saying it's a boy! Why couldn't he just say it was a girl? I want another girl baby!"

He was so confused about the whole ultrasound process. He was afraid they were going to cut me open to check on the baby so we sat down to watch a few YouTube videos to help dispel that idea. Apparently he also is under the impression that the doctor assigns the gender during the ultrasound. Alas, the gender was determined a long time ago and the doctor just takes a little peek...

Andrew took him out to buy a box of birthday cereal and talked him around, so now he's excited about having another boy in the family.

When the girls came home from school they were also quite eager to learn the gender. Miriam actually ran up to me yesterday and said, "So, what is it?" and I said, "What is what?" because I had no idea what she was talking about.

Today, though, I knew exactly what information she was looking for when she popped the question.

"I knew it!" Rachel said. I knew she'd be excited; she's been team blue all the way.

Miriam surprised me by flying off the couch with a leap of excitement. "Wahoo!" she whooped. "A new baby brother!"

Anyway, now that we know it's an Ichabod we can take this naming game a little more seriously...
Posted by Nancy at 12:13 AM

Email ThisBlogThis!Share to TwitterShare to FacebookShare to Pinterest
Labels: baby