I just went to check on Alexander because I thought I could hear him beginning to fuss, but he was still sound asleep. He was just, you know, breathing and we could hear him, through the closed door.

I made an appointment with the ENT specialist after all and when we got there, the first thing he noted was Alexander's stridor because, well, it's pretty apparent aurally obvious. We talked for awhile about his breathing, eating, and sleeping habits. The doctor looked in Alexander's ears and nose with his little light thing (I'm feeling very smart right about now) and then suggested that we do a scope, just to solidify a diagnosis.

Oh, and during this process Alexander spat up all over creation and I calmly wiped it up, as one does (unless that person is Miriam, in which case they scream and cry and take a shower (and this wasn't even a bad spit because, as you can see, her shirt is still dry)):


"Is he currently on any medication for reflux?" the doctor asked.

I said that he was not.

"Well, let's start there. I'll send you home with a prescription today because you acted like that was normal and that was was not normal."

Then we went and had a flexible laryngoscopy, which was an interesting experience for me (and a rather intense experience for Alexander, judging by all the screaming he did). The doctor threaded the camera through Alexander's left nostril (and later repeated the process on the other side to make sure his nose was formed properly) and on down his throat to get a good look at things. Alexander has all the classic markers for laryngomalacia.

In the International Journal of Paediatrics, Drs. April Landry and Dana Thompson explain that:


Supraglottic tissue collapse and obstruction during inspiration is the hallmark of laryngomalacia. The epiglottis, false vocal cords, arytenoids, ventricle, and aryepiglottic folds are the structures making up the supraglottis. As seen in Figures 1(a) and 1(b), the common findings seen on exam are prolapse of the posteriorly positioned arytenoid cartilages and mucosa into the airway during inspiration, shortening of the distance between the arytenoid and epiglottis, and an “omega-shaped” or retroflexed epiglottis.

So basically there's a bunch of "redundant" tissue in Alexander's throat that is getting sucked into his airway when he breathes in and that's why he's so squeaky.

The reflux medication should help because babies with GERD (gastroesophageal reflux disease) and laryngomalacia end up in a bit of a positive feedback cycle, with their reflux irritating the throat, causing increased swelling and thus increased breathing problems, and their layrngomalacia generating "negative inthrathoracic pressure which promote gastric acid reflux onto the laryngopharyngeal tissues leading to laryngopharyngeal reflux," and everything just keeps getting worse.

The doctor is hoping that his reflux medication will improve his symptoms. I don't know about that (because he's still super loud), but I do know that the poor boy hates his medicine.

I tasted it—we give it to him with a syringe so I just put a tiny smear of leftover stuff on my finger and licked it—and it is pretty nasty stuff, so I can't really blame him.

Andrew adamantly refuses to taste it because "that's against the law!"

I jokingly told him "just once won't hurt."

He said, "I didn't go through the DARE program for nothing!"

I was like, "Oh, come on! It's not like it's an opioid! You're not going to wind up an addict, curled up in the corner, pining for another hit of your son's ranitidine. It's not like it's an antibiotic and you'll be contributing to resistant strains of bacteria. It's reflux medicine (and he spits half it out, anyway)."

(I should note that this conversation took place long after bedtime; to the kids I preach if-it's-not-yours-don't-take-it).

Andrew figures that even if it hasn't helped his breathing, it at least has created somewhat of a Pavlovian response in Alexander. In the evening when Andrew gives him his dose, Alexander coughs, gags, and fights the whole time...and then falls fast asleep. He hates it that bad.

There are other issues that may be present in Alexander, but which cannot be ruled out with a simple laryngoscopy, such as: airway legions, congenital heart disorders (such as an aortic ring), and often neurological issues (such as seizures and so forth). But probably it's just reflux and laryngomalacia.

We will continue to have monthly appointments with the ENT to gauge the progression of symptoms. Hopefully they'll get better, but if they get worse they'll do some more tests, such as a sleep study (to check for obstructive apnea) or a more invasive scope (that he'll have to be put to sleep for, which they'll only do if he starts having episodes of cyanosis/hypoxia (blue skin colour due to lack of oxygen) or if his growth curve starts slipping due to increased feeding difficulty).

For now he's fine, just...noisy. With any luck, he'll outgrow all of his symptoms without surgical intervention (like 95% of babies diagnosed with laryngomalacia). 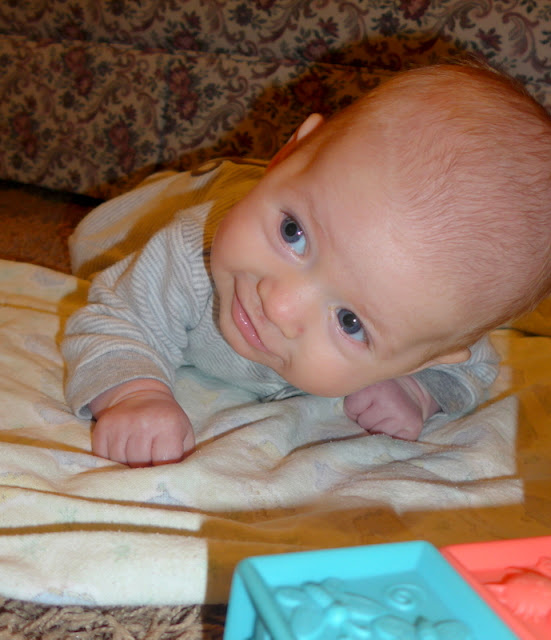 Two other notes that I can't fit in above because...I think my brain is broken:

1) Every time we give Alexander his medicine, Zoë asks if he's sick. At some point I'm sure I will stop trying to explain that he's not sick...but still needs medicine. She just can't seem to wrap her head around that concept.

2) Watching the scope pass through his nasal passage was weird. I could see the light traveling across his palate before the camera emerged in his throat, which was...weird. Did I mention that? But, as a linguist, getting to see his throat working (and his vocal chords flapping as he yelled at the doctor) was awesome.
Posted by Nancy at 1:45 AM