Late last night, just before bedtime, I was in the kitchen washing some dishes. I had already loaded the dishwasher and was working on some hand dishes. I popped the top off the dish soap, squirted some on a sponge and started scrubbing a pot that hadn't fit in the dishwasher (with nine people under one roof we can rarely fit an entire day's worth of dishes in one load).

Miriam was at the fridge getting some ice when Rachel grabbed the bottle of dish soap I'd just sat down on the counter, held it over Miriam's head, sang out, "Hey, Miriam..." and squeezed.

Soap came cascading out of the bottle. Miriam started squealing.

"What is going on?" I asked, turning around. "What are you doing?!"

"Whoa," Rachel said, clearly surprised. "I didn't mean to do that!"

"I thought the lid was closed. I was just going to pretend to squirt it..." she said sheepishly.

Miriam debated internally whether she should laugh it off or whether she should throw a hissy fit. Thankfully she chose option number one. Rachel apologized (and promised never to do it again), we all laughed about it, and Miriam had a shower before bed so she could rinse out her hair really, really well.

Other than my best disproving glance, I didn't really punish Rachel, so before she went to bed she took it upon herself to inflict a punishment: 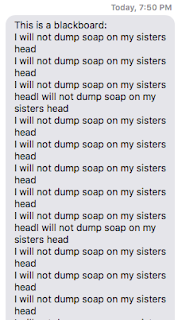 I don't think this will be happening again any time soon...