We've admittedly had a weirdly warm winter so far. It got cold enough for coats a couple of times and it snowed on Christmas Eve, but mostly it's been warm enough to play outside comfortably all season. It finally snowed again yesterday—and I only say finally not because I've been hankering for a good cold snap but because it's supposed to snow here and it hasn't been. We depend on the snow for stuff (like water through the summer).

Durham was hit with a big storm last week—they got twelve inches! Meanwhile, we were playing at the playground with no coats on, which is just weird for January!

In January we should be doing things like trudging over to the sledding hill: 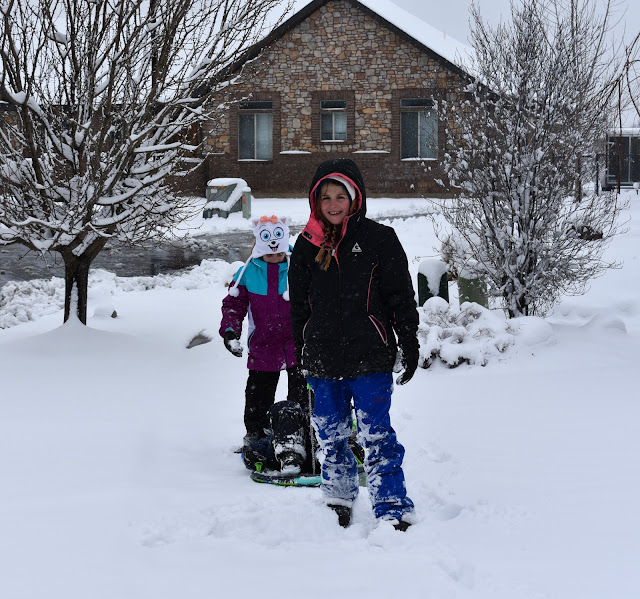 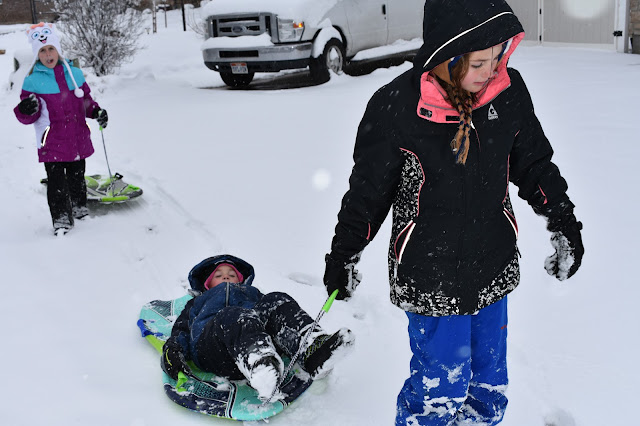 And then zooming down the hill over and over again: 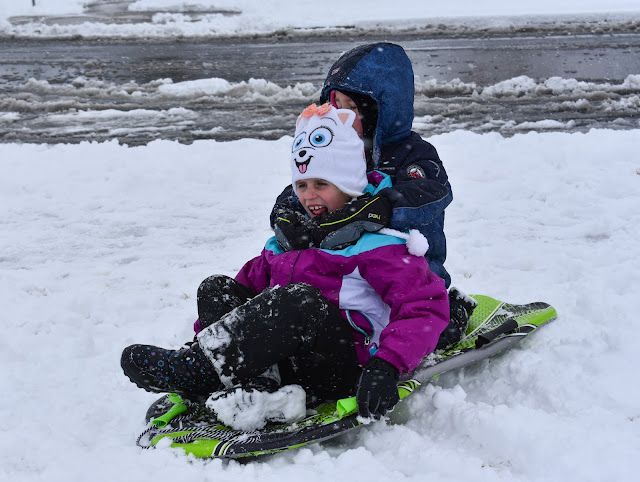 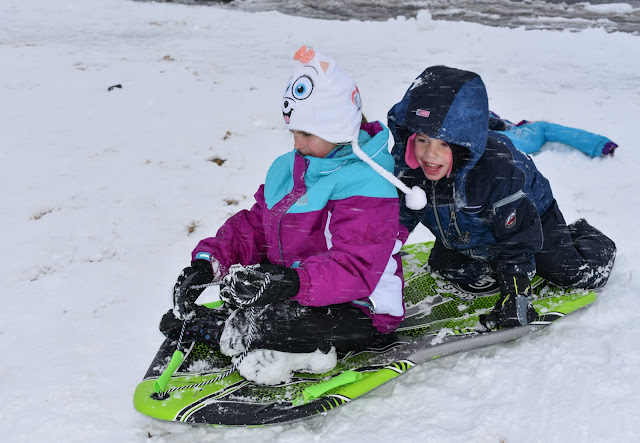 And then we should come home, strip off all our snow clothes and leave them in a big melty mound in the middle of the entryway hang them up like the responsible people that we are.

Rachel, Miriam, Benjamin, and Zoë headed to the hill yesterday morning by themselves, where they played for a few minutes before they had a big fight and all came home pouting. I took them out again in the afternoon. Zoë actually decided she'd had enough of being cold and chose to stay home and play Barbies by herself: 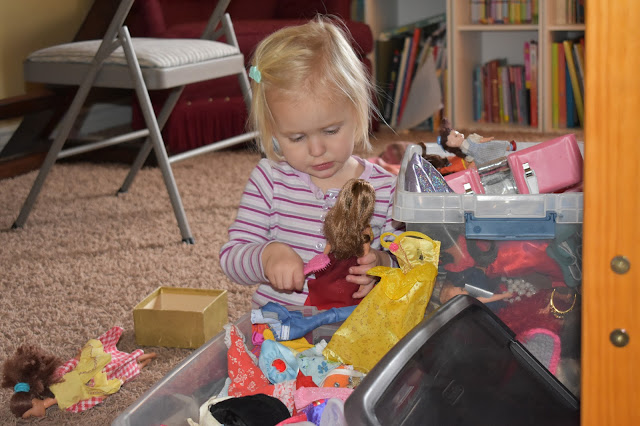 Benjamin and Miriam only lasted a few minutes but Rachel was out there for hours with her friends from school. To be honest, Benjamin probably would have loved to stay, too, but I didn't want to stick around watching the kids go sledding (baby at home, etc) and I was genuinely afraid that Benjamin would wind up with hypothermia.

My poor southern kids have no snow sense.

For example, none of the kids could figure out how to get their gloves back on once they were off (either because they purposely took them off or because they needed to do some readjusting). I had to formally teach them how to take your arm out of your sleeve, put your glove back on, and then push it through your sleeve so that it would be neatly tucked in (I thought every kid grew up just knowing that sort of thing).

He has no idea what snow to eat and what snow not to eat (like, road snow—you don't eat road snow! (or yellow snow)). He gives himself white washes and doesn't care if snow is touching exposed skin (unless Zoë "pegs" him with a snowball, like she did this afternoon—then he's all tears).

He walked home from church today through knee-deep snow in slip-on shoes and church slacks.

He loves the snow so much; but I wasn't about to just leave him unsupervised after watching him play in the snow. But Rachel agreed to keep her skin covered, so I let her stay to play. She had a blast.

Andrew is in Florida right now (where, admittedly, it was freakishly cold not too long ago—cold enough for iguanas to be falling out of trees, frozen; cold enough for alligator snouts to be sticking out of frozen swamps; cold enough (on January 17) that Pensacola, Florida (-2°C; my paternal grandma's birthplace (or at least where her childhood was spent)) was colder than Raymond, Alberta (+2°C; my maternal grandma's birthplace)).

When he arrived he texted me to say that he feels like he time-travelled to June. And then he sent me a picture of palm trees (I love palm trees; I once made him promise me that we'd live somewhere with a palm tree in our yard (and that promise was fulfilled 2008–2010 when we lived in Egypt...but I wouldn't say no to having palm trees in my yard again)). Meanwhile, my view from the window was...icicles. 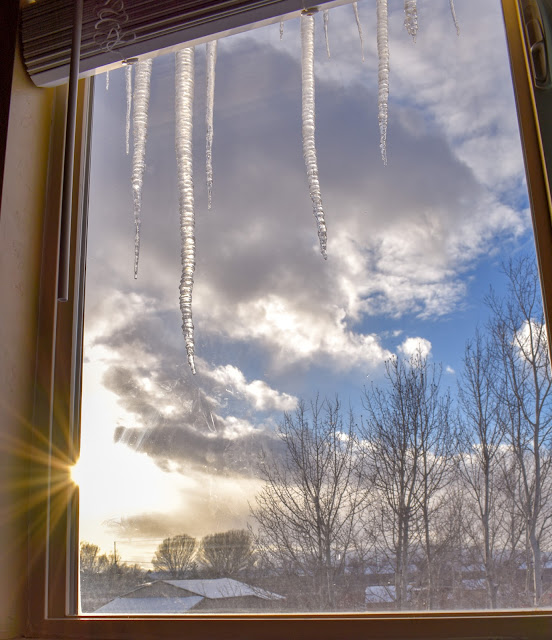 ...but given the choice between icicles and palm trees, I'm going to have to go with palm trees. 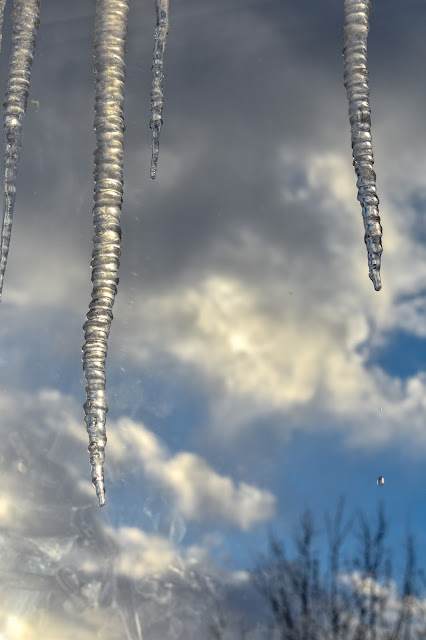 Fortunately, the view on my lap was warm and snuggly, even if the view out of my window was not: 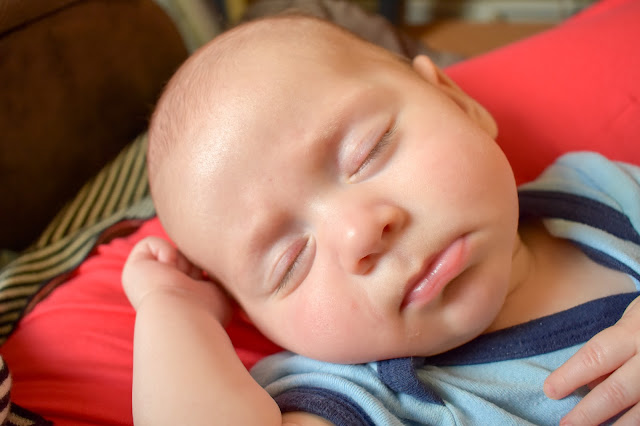