In sickness and in health...

For anyone jealous of a kindergartener craving a sleep-in, please see: Benjamin's babyhood.

I woke him up a few times, turned on his light, picked out some clothes, handed them to him, and urged him to get dressed. Eventually he staggered out of his room, draped in a blanket from his bed.

"Then put some socks on," I suggested. "But you can't eat breakfast wrapped in a blanket."

So he put on some socks and slowly made his way downstairs. I sat down to pump, hoping that I could finish pumping before either Zoë or Alexander woke up (it's usually easier to pump without them around (no offence, guys)). Soon Miriam came up and tattled that Benjamin was sprawled out on the couch downstairs instead of getting breakfast, so I called down for him to put some food in his belly. A few minutes later when I still hadn't heard any noise that sounded like breakfast I asked Rachel to check on him and report back to me (with explicit instructions not to say anything about what he's doing to him because that would just cause a fight). She reported that he was still moaning and groaning on the couch, not getting breakfast.

This is not unusual behaviour for him in the mornings.

What is unusual is him jumping up from the couch, running to the bathroom, and puking in the toilet.

Miriam was doing her hair at the time, I think, so she had a front row seat to his theatrics and rushed upstairs to tell me all about it (in very vibrant detail). I asked her to help Benjamin get a throw up bucket and tuck him back into bed (older kids are very handy) while I finished pumping.

I ended up calling him in sick, obviously, and he threw up three more times throughout the day. Mostly he rested in bed, but he also watched a Star Wars movie and his sisters read him a lot of stories. Aren't they sweet? 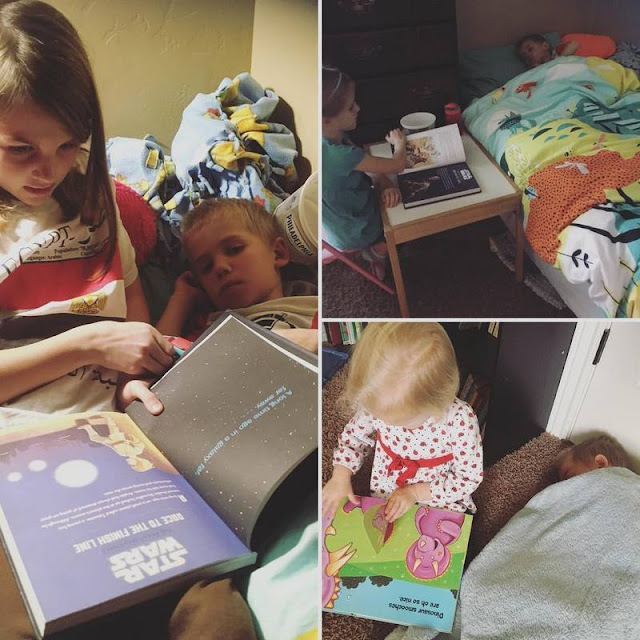 What he wanted to do most of all was take a nice, warm bath, so I ran a bath for him in the afternoon, shortly before we were due for ukulele practice. He fussed quite a bit about getting out of the tub, insisting that he could just stay in the tub by himself, without my supervision. But I was a super mean mom and said no.

"I don't want you falling asleep in the tub!" I said (or having a febrile seizure, or what have you), holding out his towel in the most commanding way I could muster.

He sullenly stepped out of the tub and I had just wrapped him up when the doorbell rang.

"That's Taylor for ukulele," I said. "Will you be able to get yourself dressed?"

"Of course!" he said, slightly offended.

So I went downstairs and led ukulele rehearsal for our little crew. Meanwhile, poor Benjamin had fallen asleep on his bedroom floor, wrapped up in his towel. He didn't even make it to his dresser!

By the time I made it upstairs, Zoë had found him and was "reading" stories to him (even though he was asleep). His big sisters took turns reading to him after they came home from school. All three of them made sure he was stocked with water and blankets and pillows. They were all so sweet!

And he was a pretty good patient, himself. He mostly just lounged around various places and every time he puked into his bucket he took it to the bathroom by himself to rinse/flush (which is awesome because I hate rinsing/flushing puke from buckets down the toilet).

Hopefully no one will be sick tomorrow and the rest of us will avoid being sick at all. If it's the same thing that Zoë (and then Andrew) had, it sure is a slow-moving sickness and our house will be shrouded in sickness for the next couple of weeks before it cycles through everyone. I suppose the rest of us will just have to be extra strict about hand washing to avoid getting sick at all...

At least I know that even if anyone else gets sick, I have a whole little crew of nurses to call on!

As much as these kids sometimes fight, they sure do take care of each other when the need arises.
Posted by Nancy at 1:10 AM