The kids were busy putting together a puppet show most of the day yesterday, though they did take a break for President Monson's funeral (we watched the broadcast from home) and lunch. Much too late in the afternoon, when the sun was dropping low in the sky, we finally made it outside and to the park so the kids (Benjamin, specifically) could run off some energy. It was a beautiful day (but it would have been warmer had we gotten out earlier in the afternoon).

I took our "big" camera so that I could practice taking pictures because having a nice camera does us no good if it's just sitting at home the majority of the time. But, oh, it's complicated. I have no idea what (more than) half the buttons do.

My most willing victim subject was Alexander, but that's only because he was stuck in the baby swing most of the time. 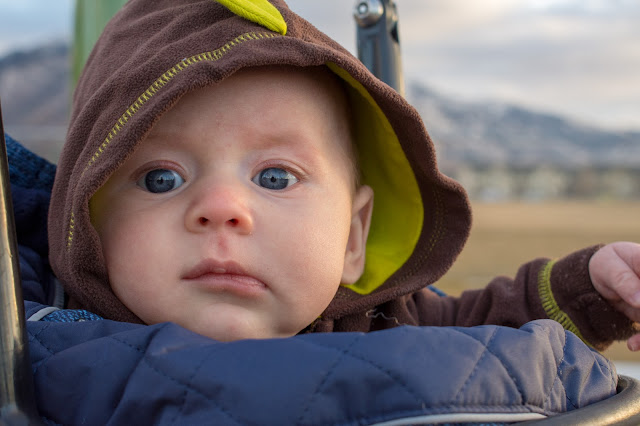 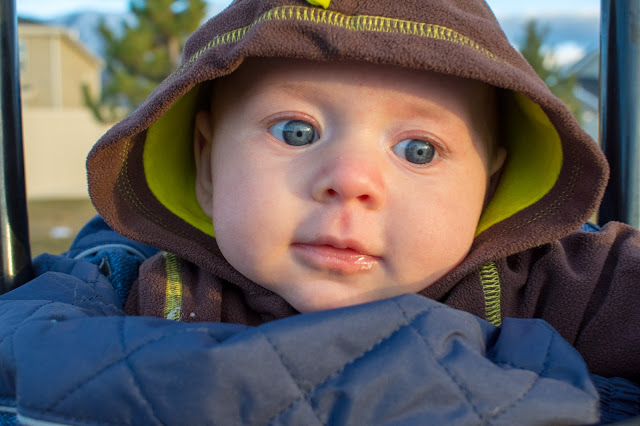 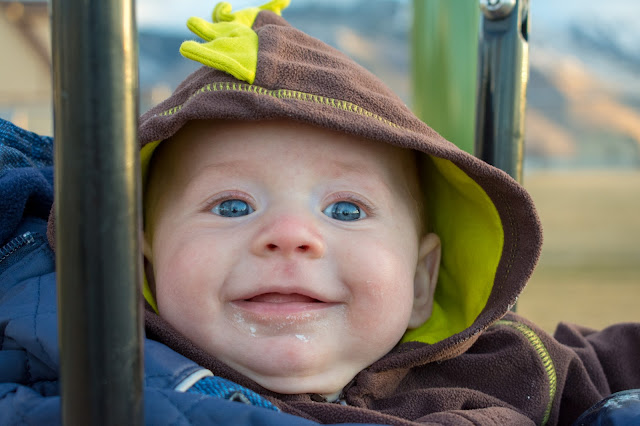 Pardon his spit up. He's usually got at least a little bit on him (as have I).

Zoë loves swinging. It's the first (and typically last) thing she wants to do at the playground. She gets quite demanding about how she swings: "Mommy, push me. Higher. Use two hands. Higher! More! Higher!" She never wants to slow down. When I tire of pushing her and tell her, "Five more pushes and then you can just swing until you stop," she lets me push her five more times and then demands that I stop the swing immediately and pull her out. She'd rather be out running around, climbing up things, and sliding down, than be stuck in a swing with waning momentum. 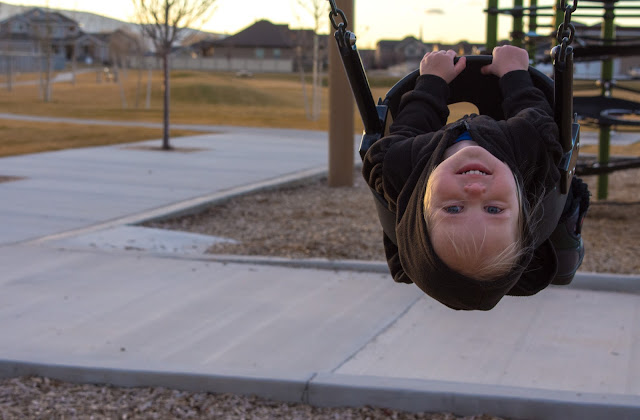 Benjamin isn't really one for the swings. I'm not sure why because he loved swinging as a baby. He did seem to finally have grasped the mechanics of pumping when we were at the park on Thursday afternoon when I made him hop on the swing to practice again. But he didn't get on the swings at all yesterday. He spent all his time chasing after his sisters (they like to make him be "it" when they play tag and he'll do it for a good long while before he starts getting upset about not being able to catch anyone). 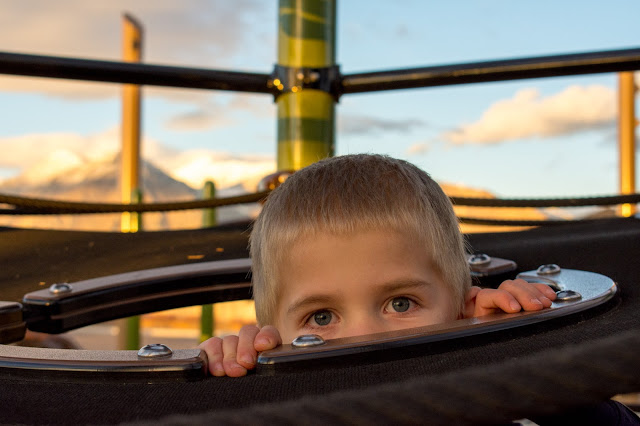 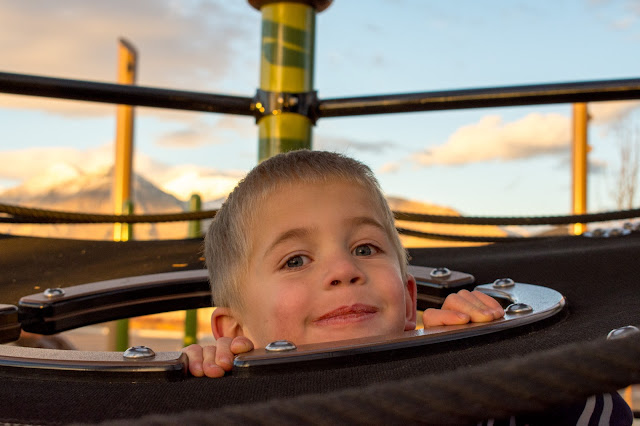 Here's Miriam enjoying some time on the swing: 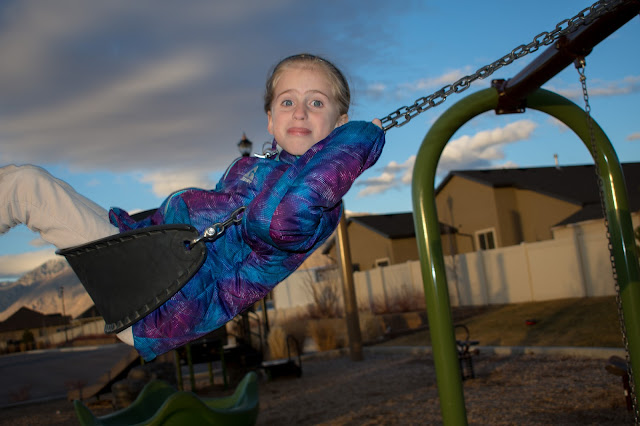 No picture of Rachel, unfortunately. She and Miriam were both so busy running around that I could hardly catch them. A girl from Rachel's class lives nearby the playground and when she saw us at the park she came and joined us, so there was a rousing game of tag going on.

Eventually Zoë climbed into the wagon and started howling about wanting to go home, so I rounded up the kids and we headed home. Somehow Miriam managed to pull all three of her siblings (not factoring in Alexander, who was in the baby wrap) most of the way home. I'm really not sure how she did it—even running part of the way!—because when I took over for her at the busy road before our house I had to make Rachel and Benjamin hop out to walk. I couldn't pull them all across the street at the speed we needed to cross!

Here she is looking rather worn out (but she posed for this picture): 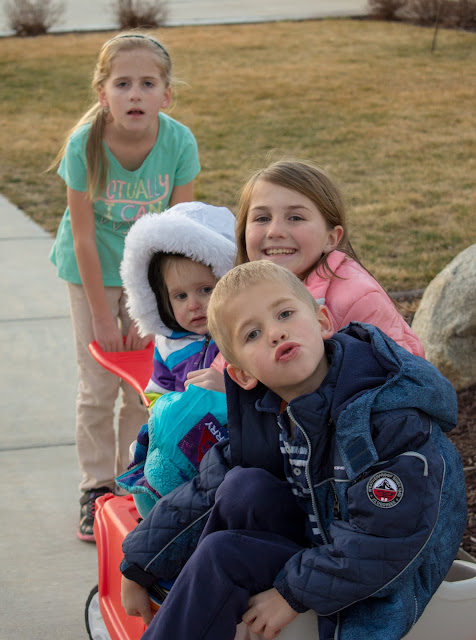 The rest of the time she seemed to be enjoying herself: 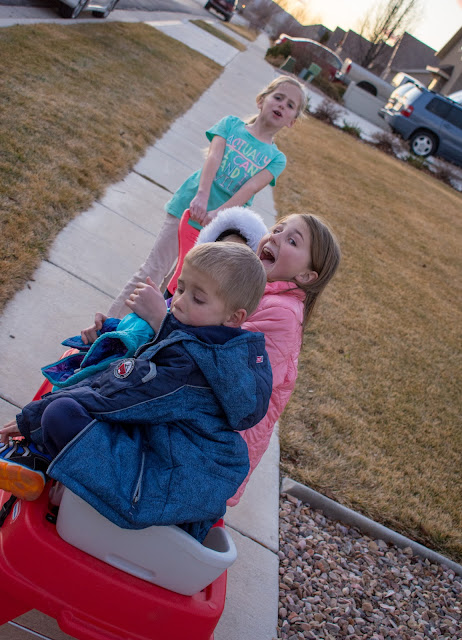 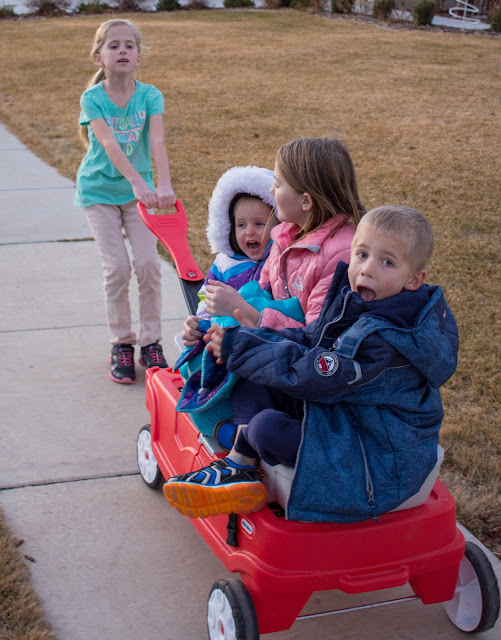