He had pushed every button, had slugged his way through every task he did do (while expertly avoiding the ones he didn't want to do), and had me at the very end of my rope.

All in the course of an hour.

I wrestled his feet into his shoes while he sobbed (when I felt like doing a little sobbing myself) and then I sent the kids on their way and sat down for a few deep breaths while I wondered how one little person can be full of so much personality.

"You have 2.5 hours to pull yourself back together," I reminded myself.

Ahh, half-day kindergarten, I can't tell if I love thee or loathe thee.

But Benjamin, for sure, I know that I always, always love him, but yesterday morning made me question just how much I liked him. By the mid-afternoon he'd managed to make me fall back in like with him again so I'm glad it went a little smoother.

I suppose part of the reason it went smoother was because Bob was over working on the basement and he let Benjamin "help" him carry bits of broken cement out to his big trash trailer. Benjamin really did help—he was hauling big pieces of concrete outside and filling buckets with smaller pieces—but I'm sure he also got in the way quite a bit.

He was so excited to be put to work. I can't get him to pick up his LEGO, but Bob says, "Fill this bucket with the little pieces," and Benjamin went right to it. He shadowed Bob up and down the stairs, carrying with him bits of our old basement floor (Bob is putting in a basement and had to move some pipes, so he had to cut out some of the floor). He talked the whole way about what hard work it was and how fun it was and how when he grows up he wants to be a builder.

"I don't really want to build anything," he explained. "I just want be the kind of build that carries the big pieces of cement. Not the little ones like I carry. The big ones!" 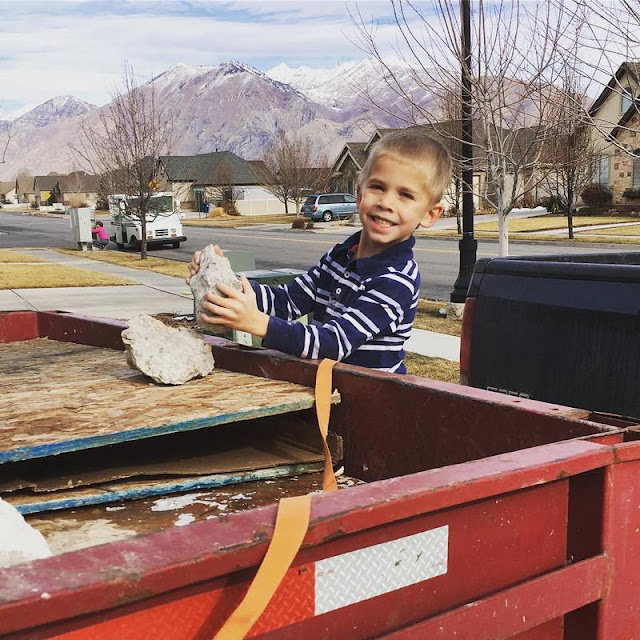 It almost has me wondering if he'd enjoy a rock-carrying camp. Putting him on a soccer team was an abysmal failure, but I think if I just got him a shovel and a plot of land he could dig and hunt for rocks in he'd be happy. Maybe we'll have to schedule some digging time for him.

When Bob and his crew were making the hole in the basement floor, Benjamin became obsessed with the idea of needing a shovel. He even interrupted me in the shower because it was an "emergency" and he "needed" a shovel so he could dig a big hole.

Later on when he asked us where he could buy an axe we began to worry about the big hole he wanted to dig in the backyard (not really—he wanted the axe so he could chop down a tree to build a treehouse in another tree, and he wanted the shovel so that he could plant an apple seed—they were just odd requests to occur in such rapid succession).

Yesterday during Miriam's FHE lesson (about prayer) she had us all list something we could say we were thankful for as well as a blessing we could ask Heavenly Father for. Benjamin quickly said he'd start praying for an axe that very night.

Good luck with that one, buddy.

Anyway, he got Zoë all excited about carrying cement as well and they both spent quite a bit of time helping clean up in the basement (and getting underfoot quite a bit, I'm certain). 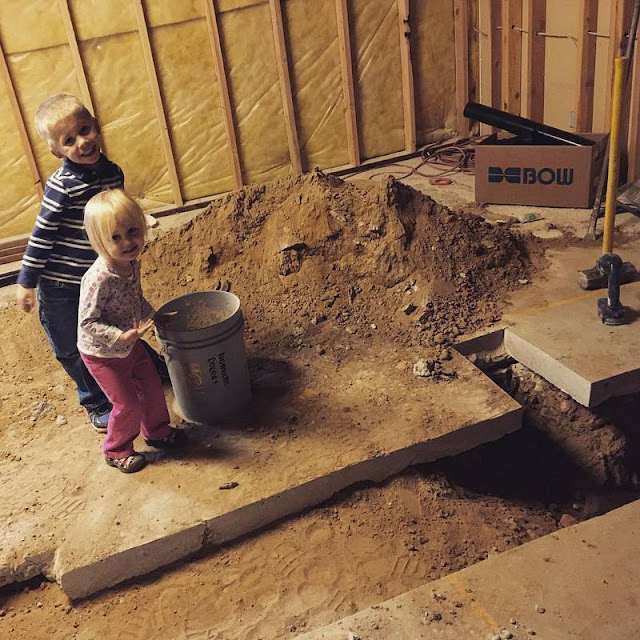 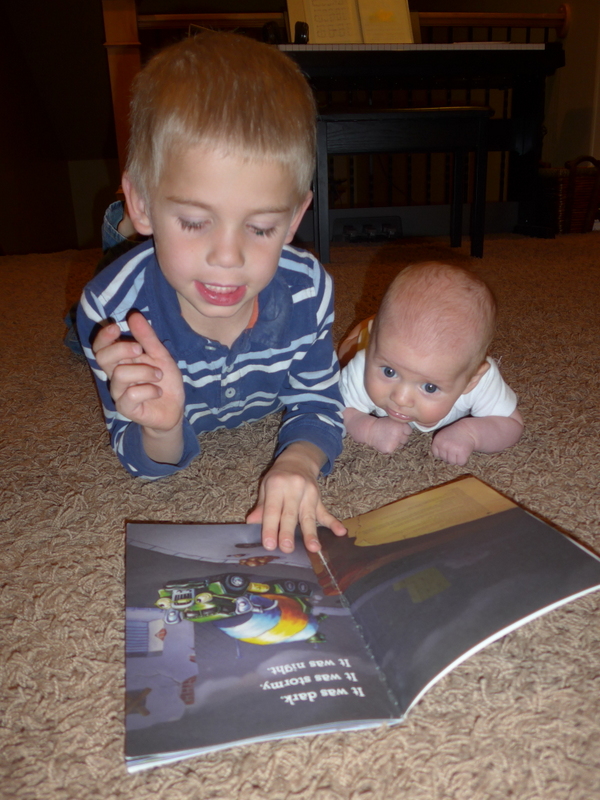 When he finished he asked if he could hold Alexander, which is one of his favourite things to do (in very short intervals): 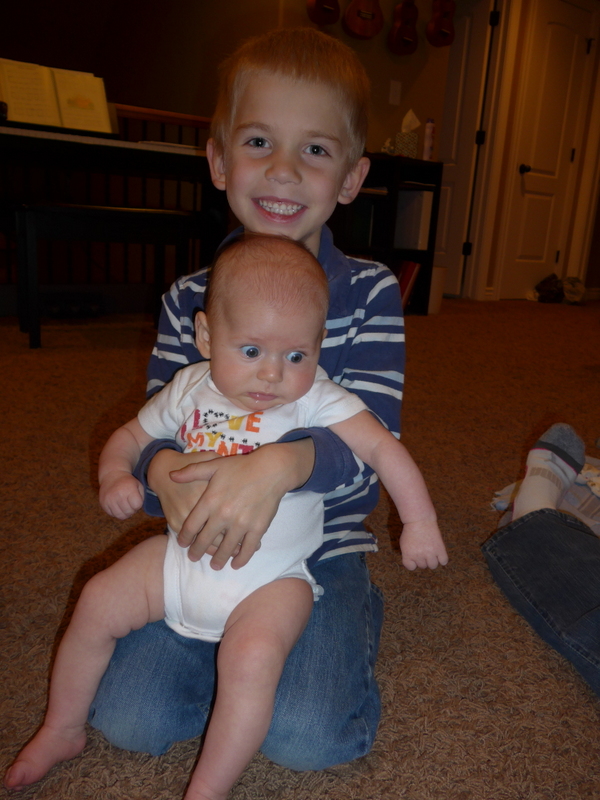 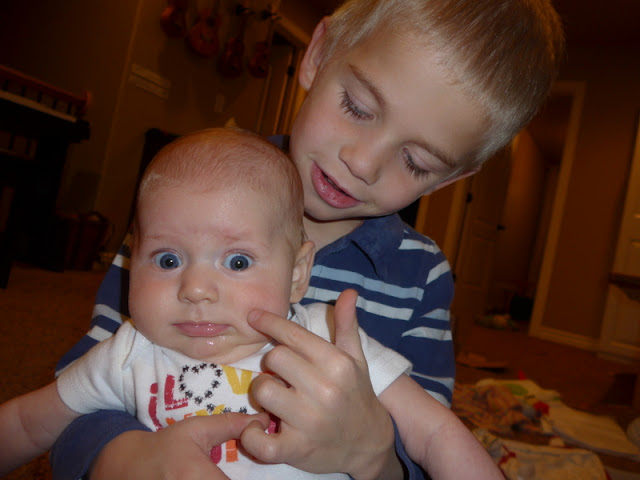 He really is a lovely boy. They're both lovely boys, my boys.

Here's Benjamin at about the same age as Alexander, wearing the very same shirt Alexander wore yesterday (only Benjamin wore it August 17, 2012):

I was trying to decide if they looked similar or not, then figured I should fast forward a few weeks so we could see what Benjamin looked like when he was three months old by his gestational age (since he's still looking a little premature in that picture). So here's Benjamin with Rachel, who apparently was just as panic-inducing with babies as Benjamin is today, on October 20, 2012:

Benjamin was certainly a much more expressive baby than Alexander is at this point (but Alexander is a much bigger fan of sleeping, so you can't argue with that). But also, he's also nearly five months in this picture while Alexander is only nearly three months old. I'm sure Alexander will get that smiley. Or at least smilier than he is.

I'm not really sure how their milestones line up at all because a baby doesn't develop the same outside of the womb as they do inside the womb, so much of Benjamin's babyhood was...ish. Like, is he so expressive because he's been outside of the womb for five months and got a head start with recognizing facial communication? Or would Benjamin have been a super smiley baby at three months old, anyway?

And how do these things work when you're only a few weeks early? When you're two months early it's obvious that you'd readjust for gestational age, but, like, is Alexander two weeks behind his peers who were born closer to their due dates? Because two weeks makes quite a lot of difference in a baby this small.

Only two weeks ago, I swear Alexander looked much littler than he's looking these days:

Can we talk about how much I miss Benjamin's fabulous baby hair now?

I don't know if it's the melancholy Avett Brothers tunes Andrew's got playing, or if it's flipping through old photos of my babies and realizing they're not babies anymore (with the exception of Alexander), or if it's these dang postpartum hormones (I can still blame stuff on that, right?), or if it's the uncertainty of our future (pull my hair out now, please), or if it's a combination of factors, but I'm a donkey on the edge.

Why'd we have to have all these kids?!