Miriam is now eight-and-a-quarter years old, so it was high time we threw a party for her! We would have done it sooner but...Alexander and then Thanksgiving and then Christmas (and then maybe I'm a little bit overwhelmed with life (I mean...five kids is super easy! Everyone should do it! Don't be frightened!)).

My kids know they get a birthday on their fifth, eighth, twelfth, and sixteenth birthdays (and today they tried to add eighteenth—as if they'd want their old mom throwing them parties when they're eighteen) and they're stubbornly sticking to that rule through hell new babies and high water the stress of living life in limbo, like I'm some kind of super hero. Kids: it's more of a guideline than a rule!

But, honestly, as much as planning a party can stress me out sometimes, I'm always happy to celebrate the wonderful people my children are growing up to be.

This year Miriam wanted a weather-themed (but not-too themed) party and she wanted to tie fleece blankets for refugees, so that's what we did. She didn't want to invite very many people, which was surprising for me but also alright with me because small parties are more my speed. She invited three girls and two were able to come. And it was just perfect.

Her friend Hannah is in her class at school (and just moved here this year from Kansas) and her friend Lily is a friend from North Carolina (who just moved to Utah last month). The three girls got along great together, I thought.

Their first project was making plarn—yarn made out of grocery bags—so her friends brought along used grocery bags for us to use. In theory we'll be able to crochet the plarn into a lovely sleeping mat (but we'll see how that goes). They were getting pretty efficient at plarn-making! 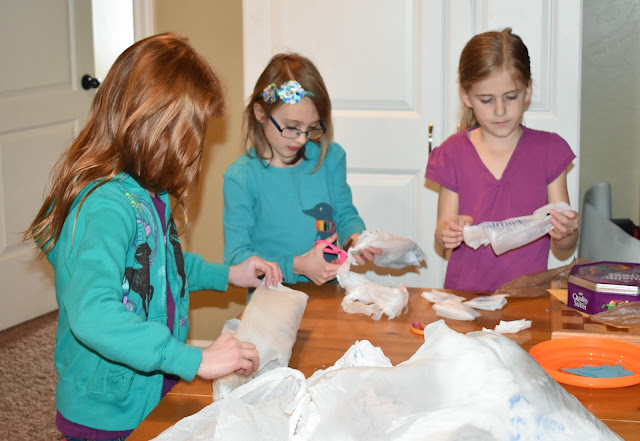 Meanwhile, I sneaked downstairs to set up our afternoon snack, which Benjamin and Zoë were rather impatiently waiting for. (In case you're wondering, Benjamin ran into a door at full tilt, so...that's what's up with his face; his attitude is probably because I forgot to feed them actual lunch). 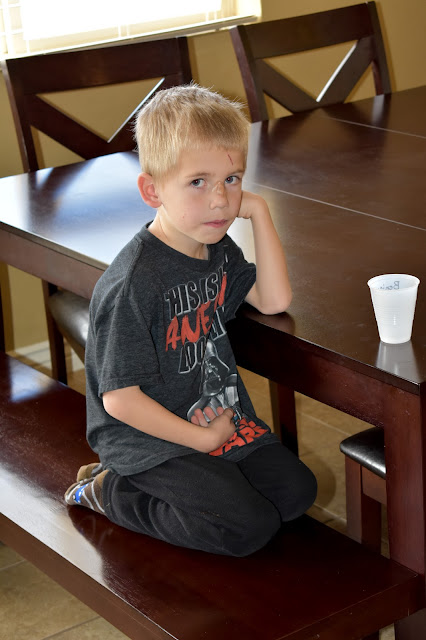 Zoë was eager to get a taste of the punch (as was Miriam; the poor girl requested this punch for Thanksgiving, for Christmas, and again for ringing in the New Year and we left her hanging each and every time, so when she put it on her list of possible party snacks (which comprised of nearly every snack in existence, which I took to mean that she'd simply be happy with whatever I came up with) I decided we should probably give in and make it for her). It's just frozen fruit puree (this time strawberry, mandarin oranges, and pineapple) sluiced with 7-UP. 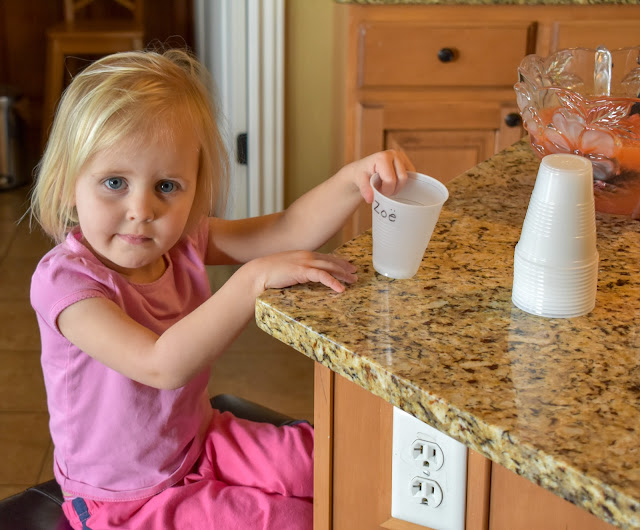 Instead of cake (because we already did cake for Miriam way back in October when it was actually her birthday) we did little cups filled with blackberries and blueberries (to be raindrops), topped with a "cloud" of whipped cream because weather theme.

Here are the kids watching me carry Miriam's fruit cup to her: 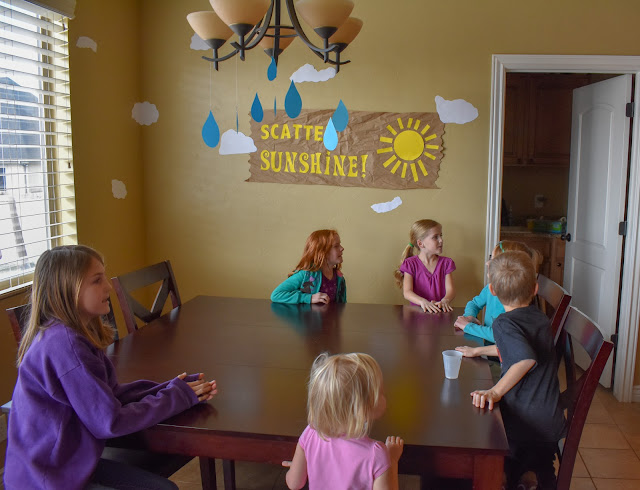 And here she is trying to ignore everyone singing the happy birthday song to her: 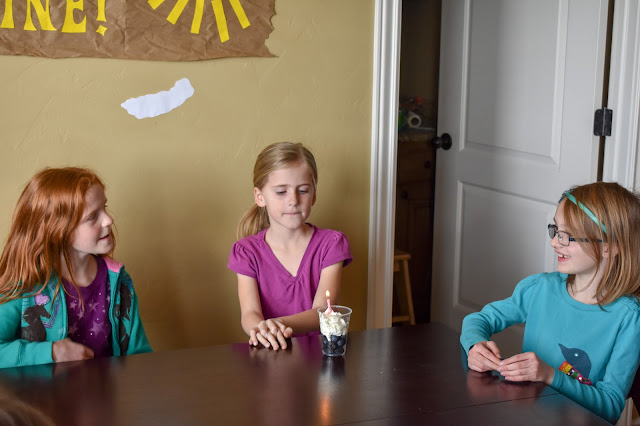 And here she is blowing out her candle: 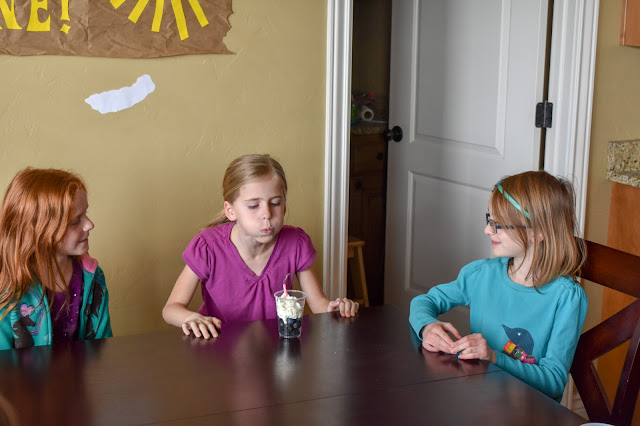 We also had cookies, apples with caramel, celery and carrots with dip, skittles, and ice cream (because when Andrew headed out to go grocery shopping this morning she called out, "You're getting ice cream, right?" He wasn't really planning on it but it was her birthday (party) so he said, "Yeeees. Yes, I am."). 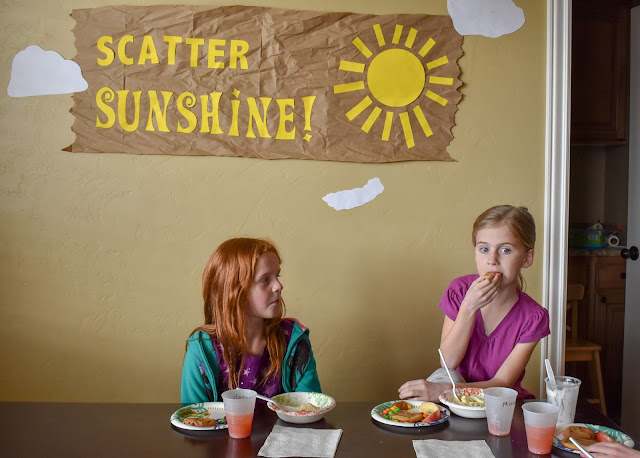 I thought my "scatter sunshine" banner tied together the weather aspect of her party with the service aspect of her party quite nicely. And I put eight clouds on the wall and hung eight raindrops from the chandelier. Not that anyone counted (except for me; I counted).

For whatever reason, the girls chose to tie the brown blanket first. I'm not sure why because we also had blue and green and pink and, well, I guess I figured that eight-year-old girls would be drawn to the bright cheerful colours. But they went ahead and tackled the brown blanket first. Nothing wrong with brown; it's just not the way I thought things would go down. 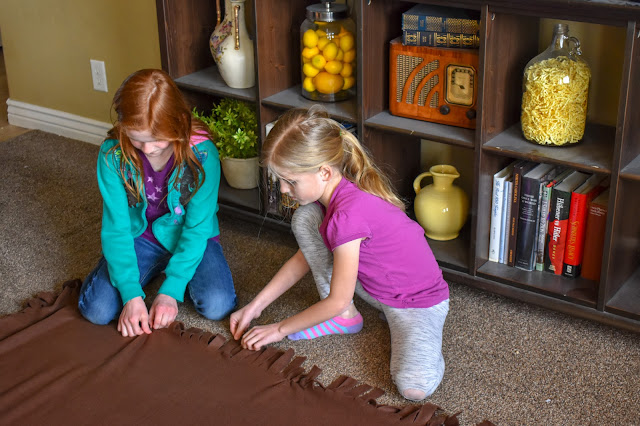 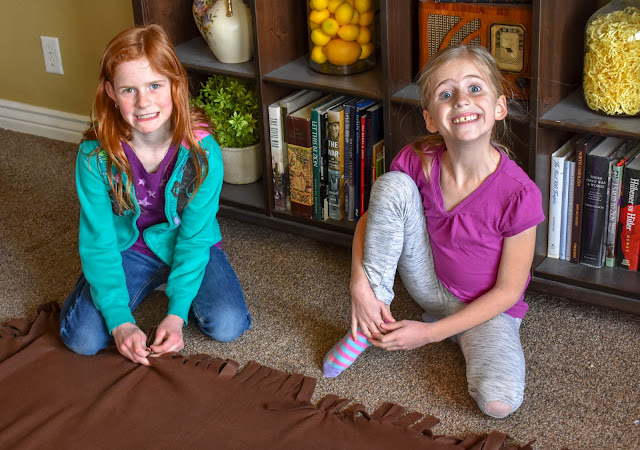 Zoë wanted to hold Alexander while I took a few pictures of the girls. 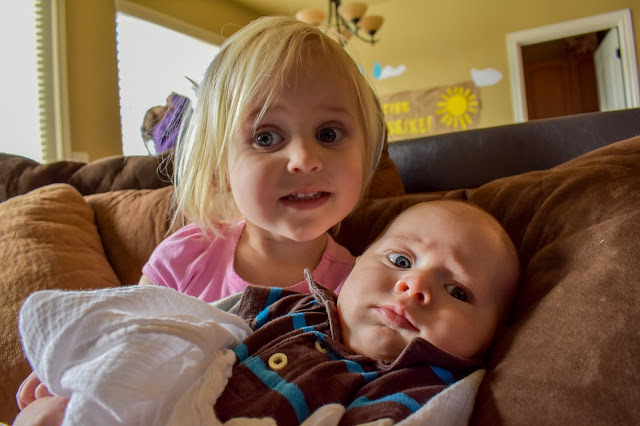 He was much less excited about this arrangement than she was (which is fairly normal). 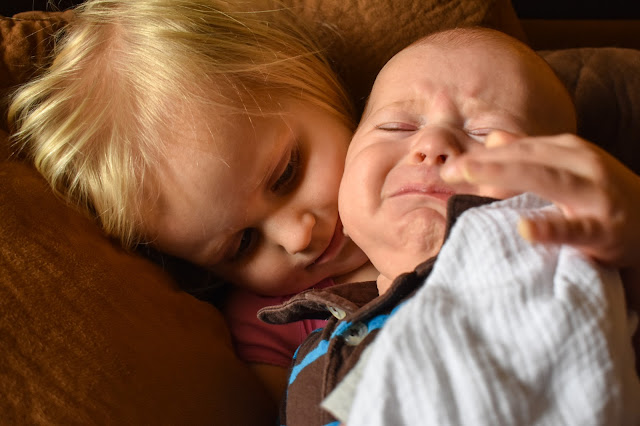 Here are the three official party-goers together: 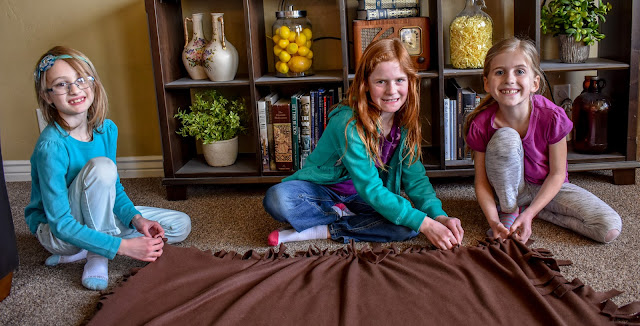 And here they are with tag-along Rachel: 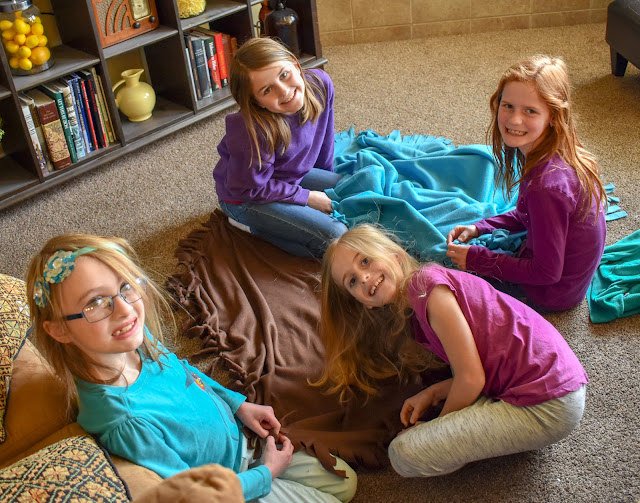 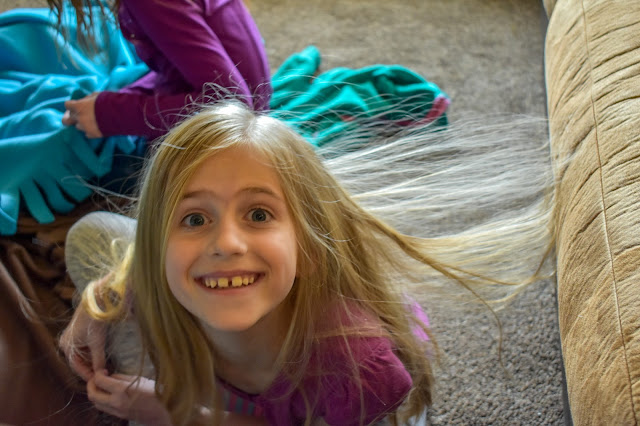 Hannah had to leave early to go to a birthday party at her grandparents' house, so we took a couple of pictures with two nearly-finished blankets (though we also finished a green blanket before Lily had to leave): 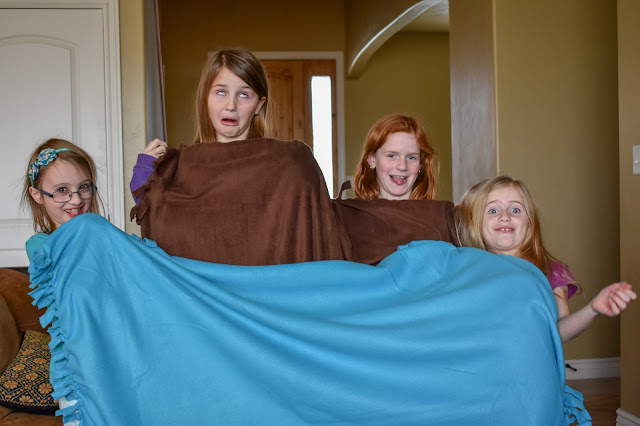 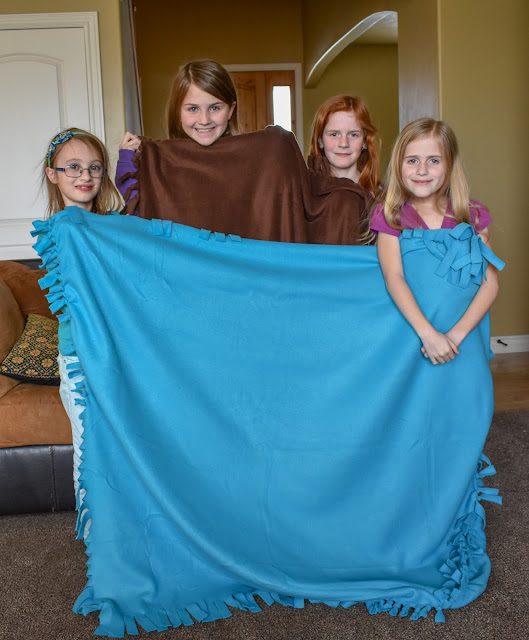 Here are a couple more pictures of the girls tying a blanket: 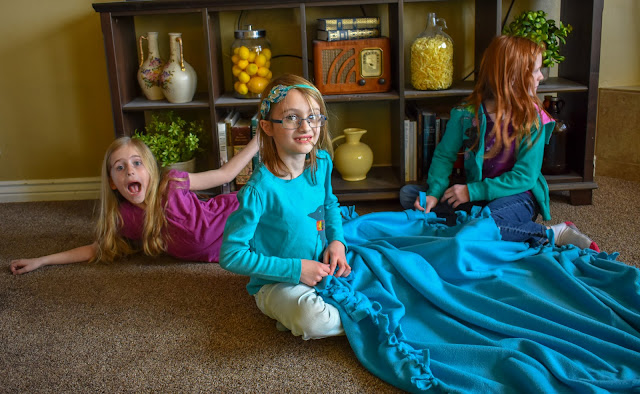 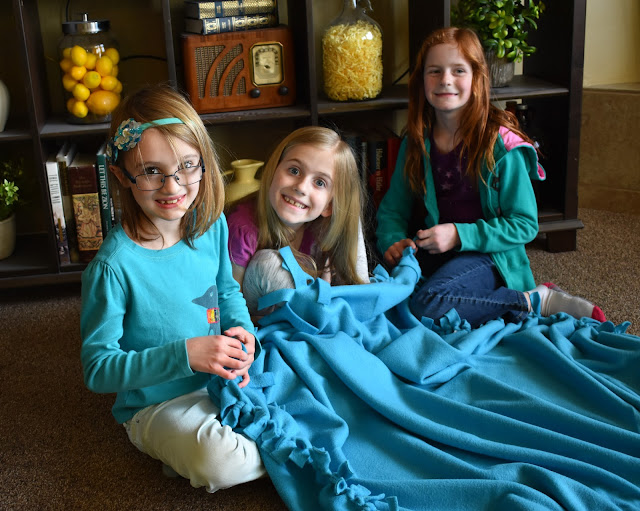 It was fun for Miriam to get together with her friends—both old and new—and it was fun to get to celebrate her for the day! She's a sweet little eight-year-old (may her sweetness never sour).

Oh, and my mom came to the party as well! She did a lot of holding (of Alexander and Zoë) and quite a bit of playing (with Zoë and Benjamin) as well as some setting up and cleaning up. It was nice to have an extra pair of hands on site (and, of course, to get to visit with my mom)! 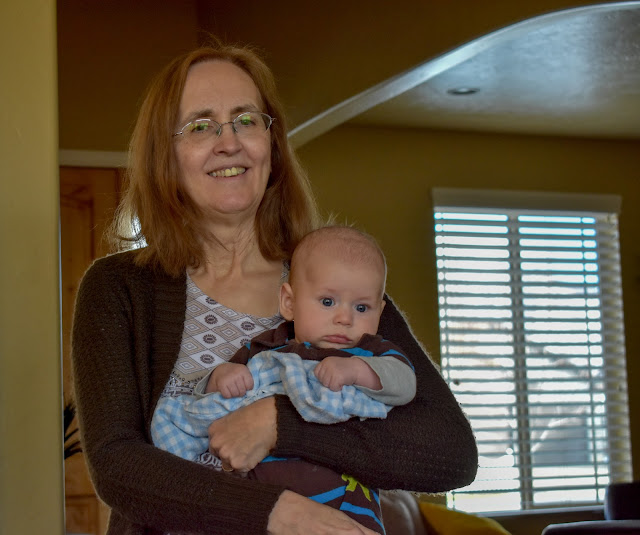