Easing back into academia, I attended my first (though unofficial) university class in over ten years this evening.

So, basically, I'm off to a great start.

Good thing it's a two-hour class!

When we found out that Andrew was officially going to be working at BYU this year I excitedly hinted to my mom that I would love to finally get to play with the Gamelan ensemble. Unfortunately, Alexander kind of threw things off for me last semester.

But now that Alexander is three months old and we have a handy pair of noise-cancelling headphones, we're ready to jump in with both feet: 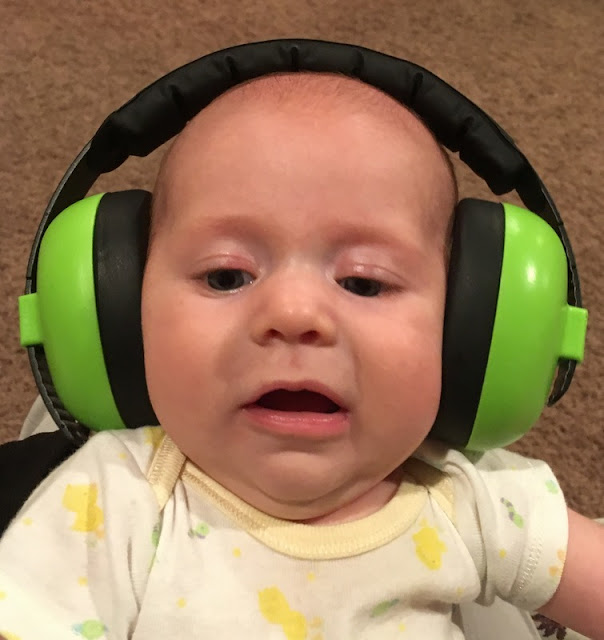 Alexander quite likes percussion and happily kicked around on the floor for the first half-hour or so, while my mom helped teach me a part on the suling (a type of flute). He didn't seem to mind the headphones, except that they prevented him from turning his head from side to side (which was a little frustrating). Later, when one of the metallophones opened up I got to learn the same part on that (and then a trickier part on a different metallophone (my mom will have to remind me of the names of the instruments because I didn't quite pick up on that)). My mom paced around with Alexander during that because he was getting upset (though, frankly, gamelan music is so loud that we couldn't really hear him fussing).

She has played with this gamelan group for years so she's familiar with their repertoire, so I didn't feel too badly about her missing some practice time to bounce the baby.

Alexander was rather popular during the break, with students flocking around him trying to coax out a smile or coo. He was rather flirtatious, seeming to understand that, while it's best to take cover while his siblings are fawning over him, these large humans posed no harm.