Andrew had planted the idea of hiking Y Mountain with the children this morning but we neglected to remember that football season is upon us. When we realized there was a football game on campus today we decided it would be best to steer clear of the area, so we looked up some other hikes we could do in the Spanish Fork area.

We settled on hiking The Grotto on the Nebo Loop (on Mt. Nebo, if that wasn't obvious). It's an easy 0.3 mile hike so we figured even I could tag along (I was not going to hike the Y with them because I'm not supposed to do anything "strenuous," though I am supposed to exercise). The kids were in awe the entire drive up to the trailhead.

"Look at how big the mountains are!" they exclaimed.

"These," we corrected them, "Are just the foothills."

"What??!?!" the kids said. "But they look as tall as Grandfather Mountain and that's a mountain!"

Grandfather Mountain is the tallest mountain they could think of, having climbed to the peak when Benjamin was Zoë's age. "At 5,946 feet (1,812 m), it is the highest peak on the eastern escarpment of the Blue Ridge Mountains," according to Wikipedia. So, yes, it's 5,946 feet above sea level, but its prominence is a mere 2,444 feet. Mount Nebo, on the other hand has an elevation of 11,929 feet and a prominence of 5,489 feet.

That's mind-blowingly large to our little Appalachian babies. It also meant the "easy" hike was a little more strenuous for us than, say, that time we hiked Mt. Occoneechee while I was expecting Zoë. But we all survived it and had a good time. 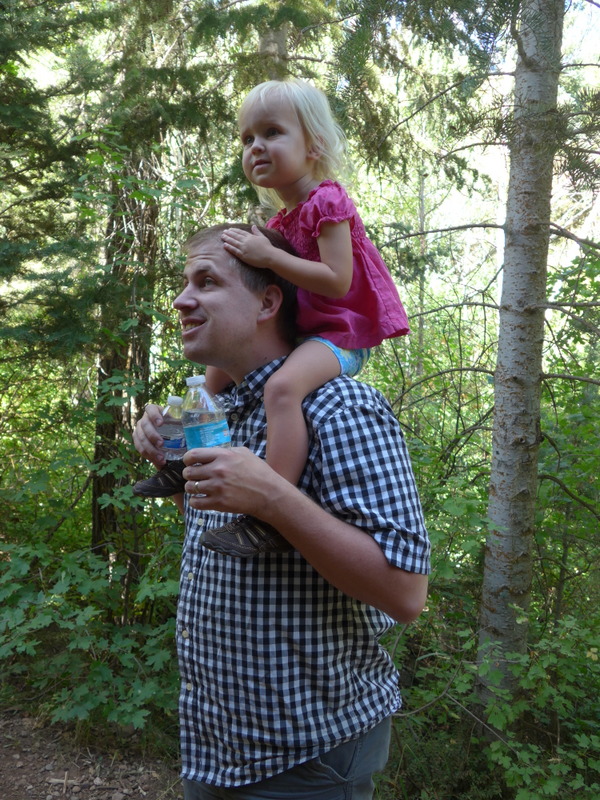 With Zoë on Andrew's shoulders and the kids bounding around like mountain goats, we were moving at quite the clip. I had to keep reminding everyone to wait for the pregnant lady, so—after we convinced the children that really, truly, honestly poison ivy isn't a big issue out here*—they'd stop to wait for me while attempting to run up the mountainside (and then would inevitably end up sliding down on their bottoms). 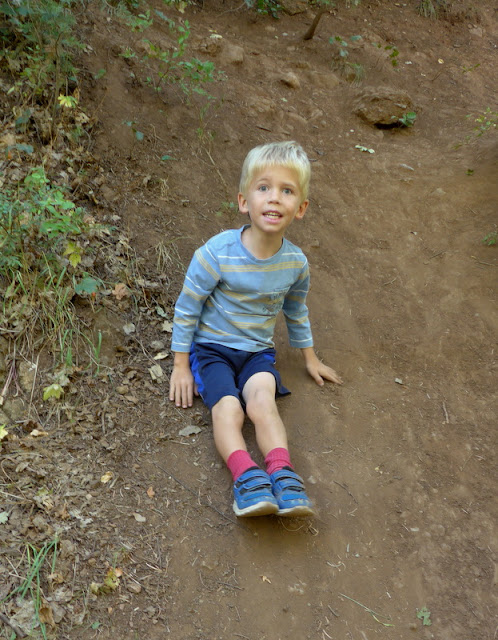 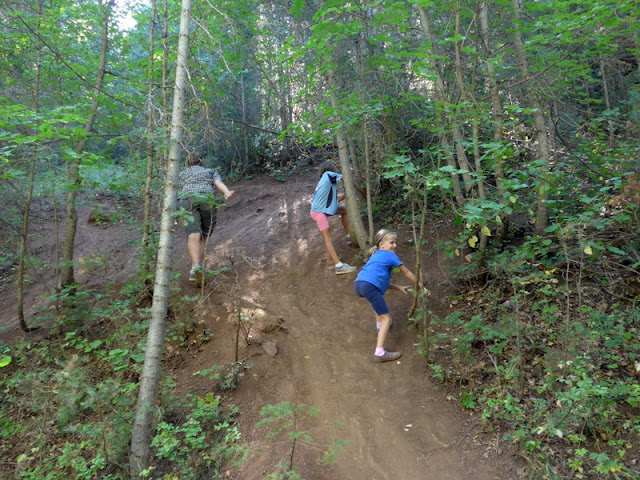 The three big kids all got filthy, but Benjamin especially so since he did the most sliding. 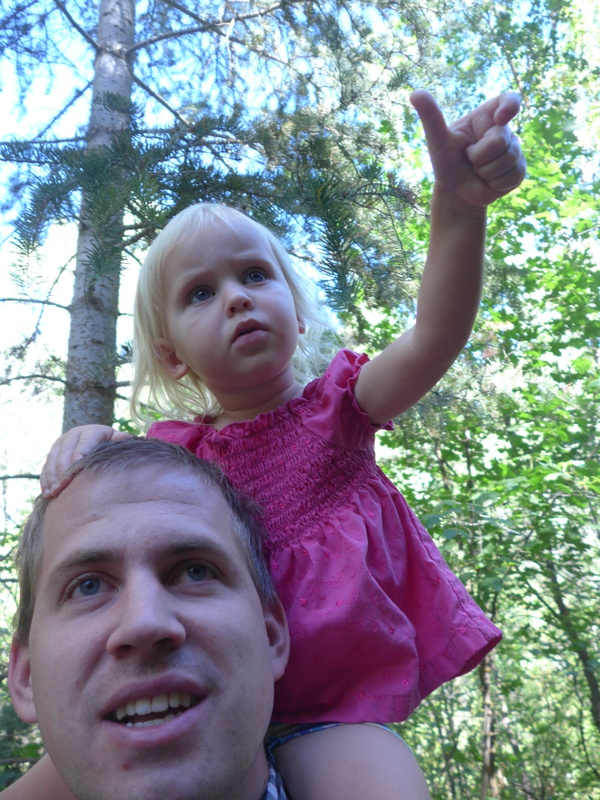 The trail follows a little stream, which Zoë found fascinating. She kept calling it a "lalo-fall" (a waterfall):

Here she is doing a little hiking on her own two feet: 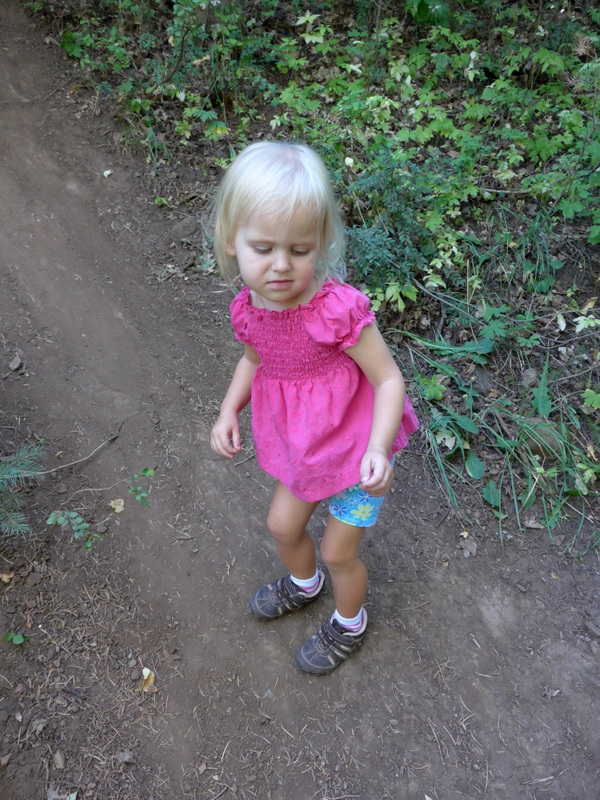 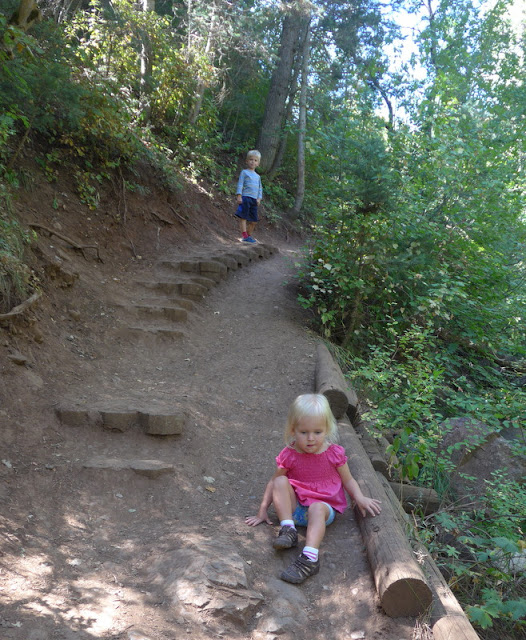 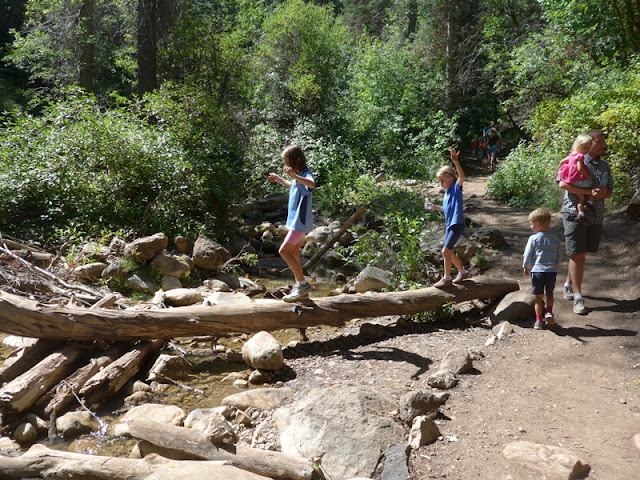 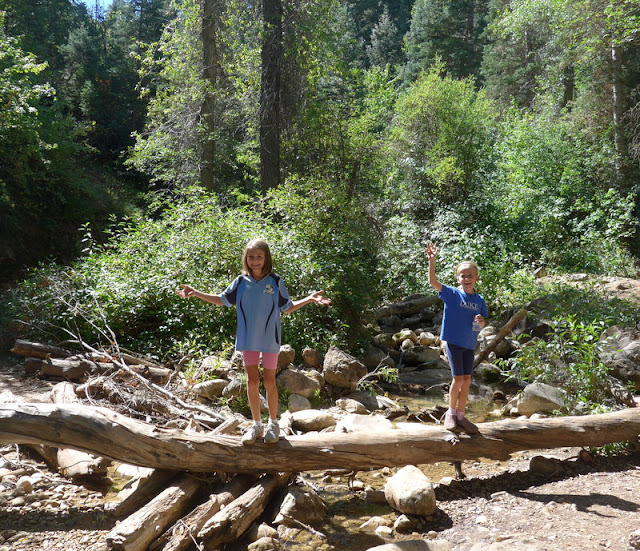 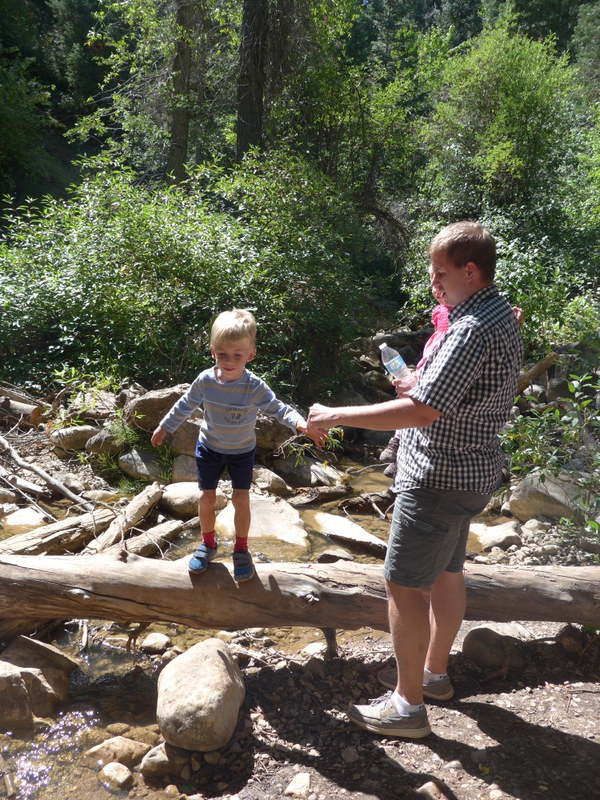 Before we knew it we'd reached the actual waterfall, which Zoë, of course was rather impressed with, despite its small size: 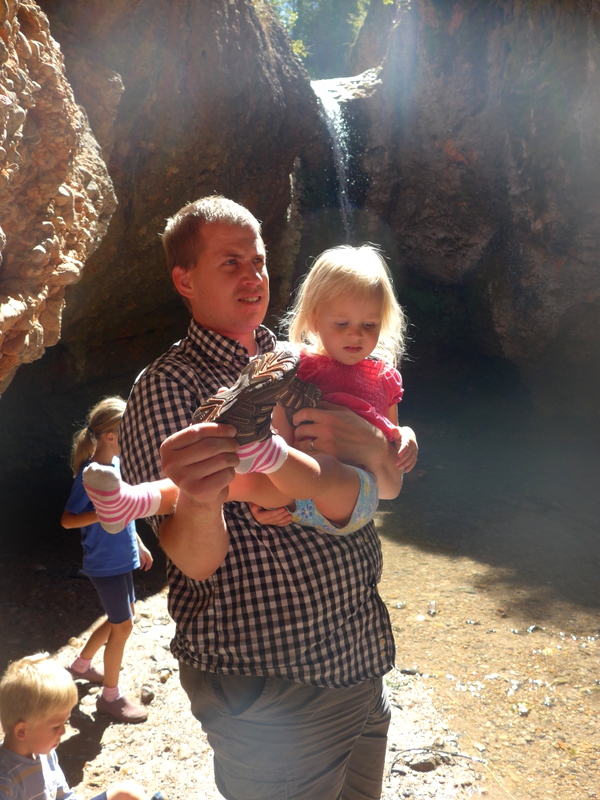 The kids wanted to take their shoes off and go wading. We were all shocked by the temperature of the water. We're not quite used to snow runoff. The Eno River, for example, is quite warm in the summer. This water was icy cold. 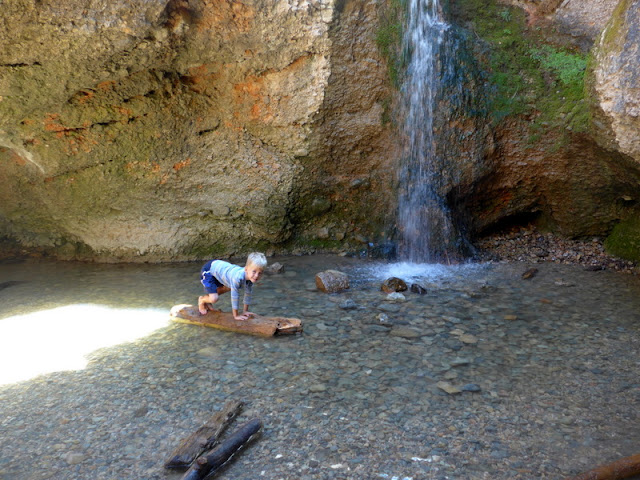 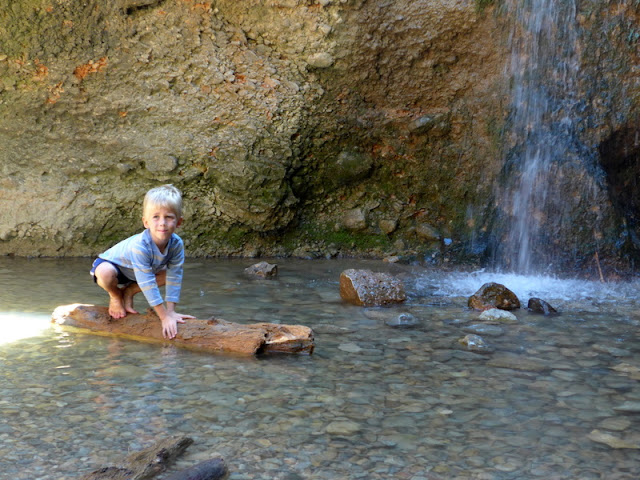 And here's Zoë taking a little dip (she cried the first time she went in but decided later that it was okay): 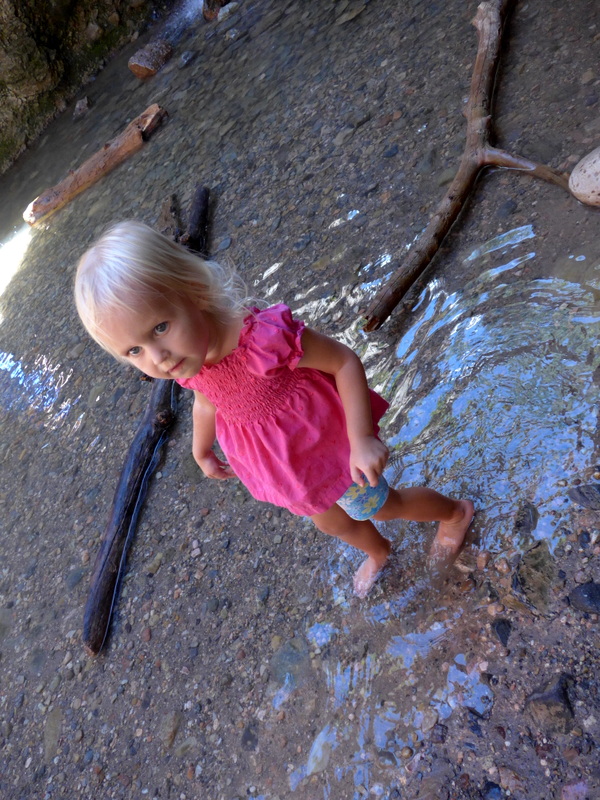 Andrew told Rachel he'd give her a dollar to stand under the waterfall: 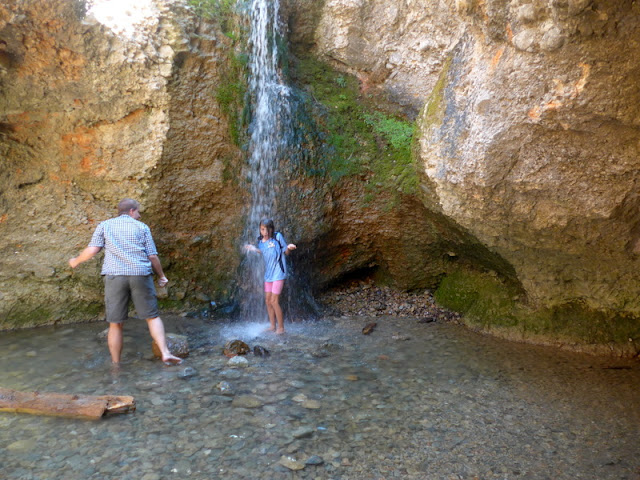 So she did, but managed to convince him to give her a dollar and get in the falls himself. 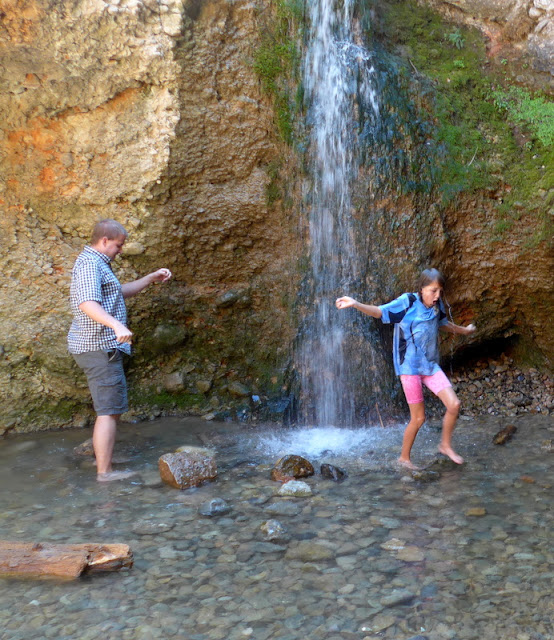 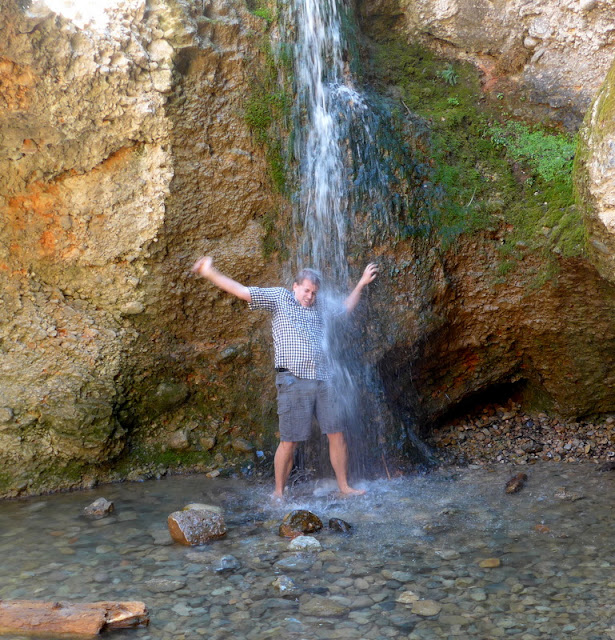 It was very cold, I'm told: 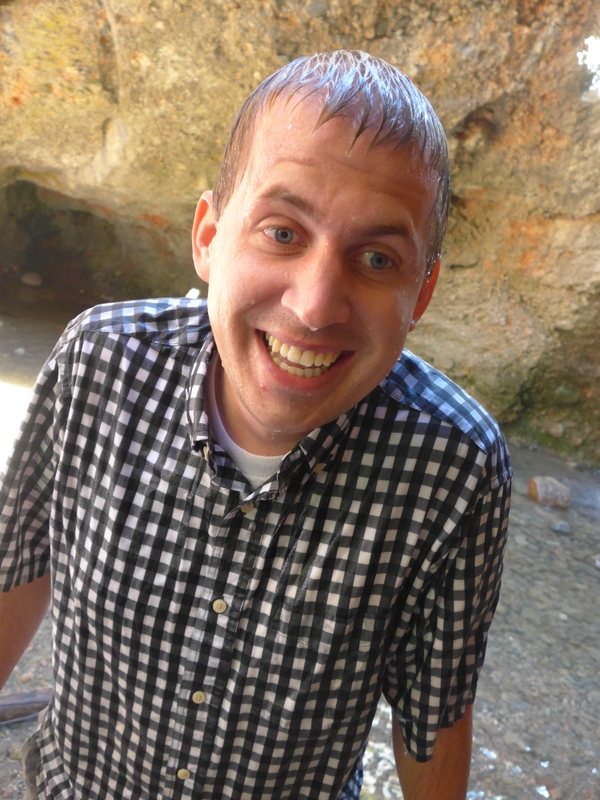 Rachel ended up earning about $4 because she kept going in for longer and longer. Here's her attempt at ten seconds under the waterfall (she didn't quite make it to ten; she was speed counting):

Here's Zoë, standing beside me on the bank, quite clearly thinking, "No way. Not me. You guys are crazy!" 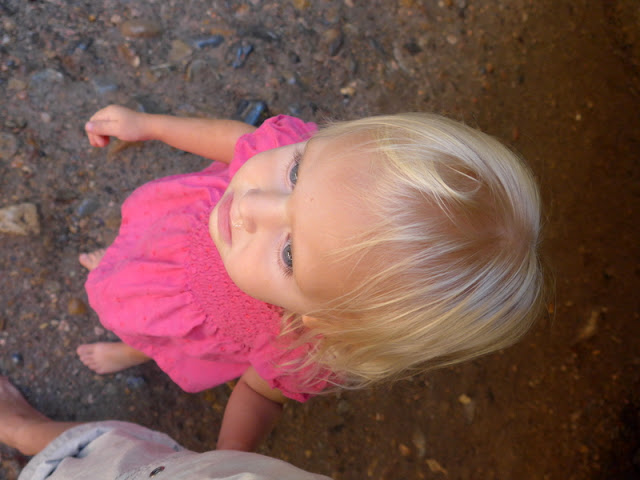 Here's Miriam getting on the crazy train: 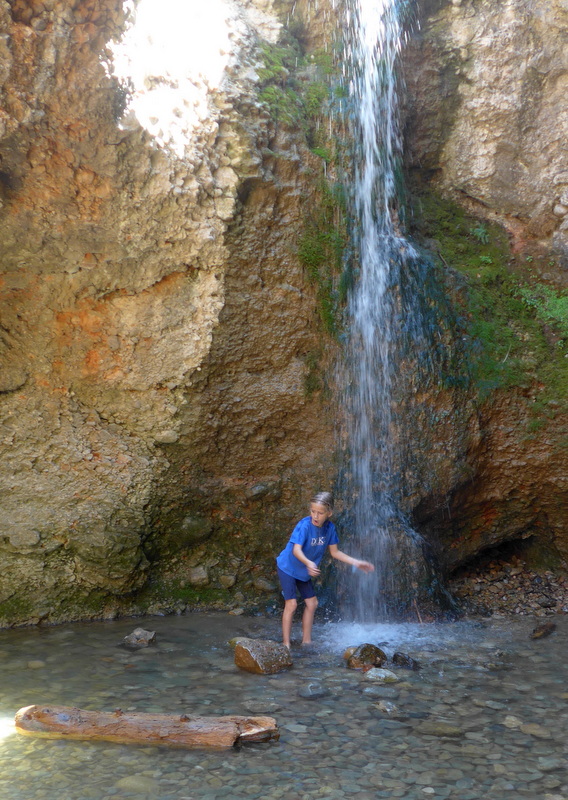 And, alas, here's poor Zoë being dunked into the falls herself (she didn't even cry, although I entirely expected her to): 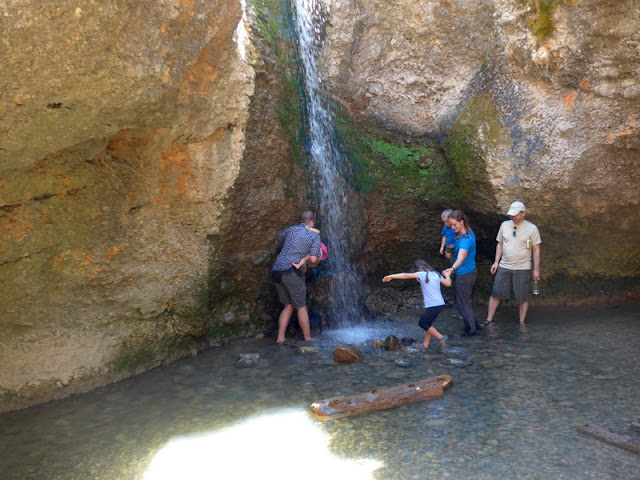 Everyone said it was fine because you warmed up as soon as you got out, but... 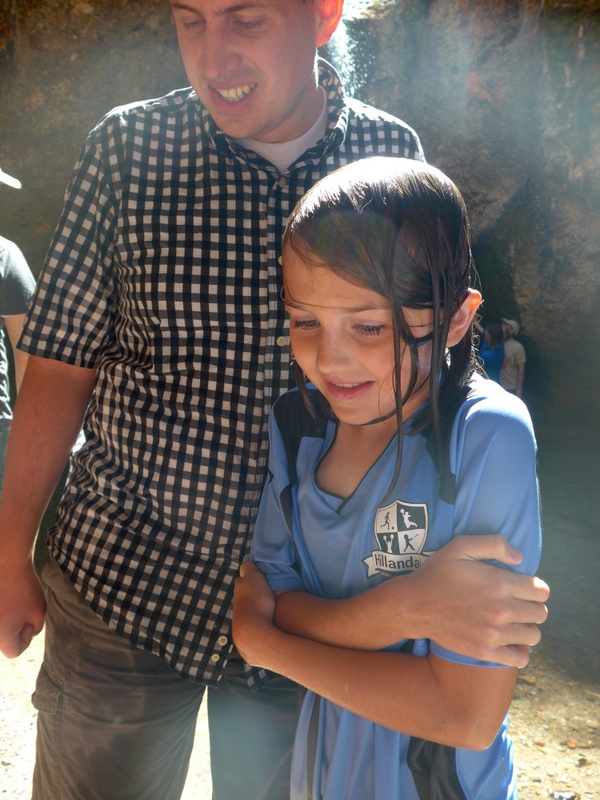 ...just getting in up to my ankles was enough for me. 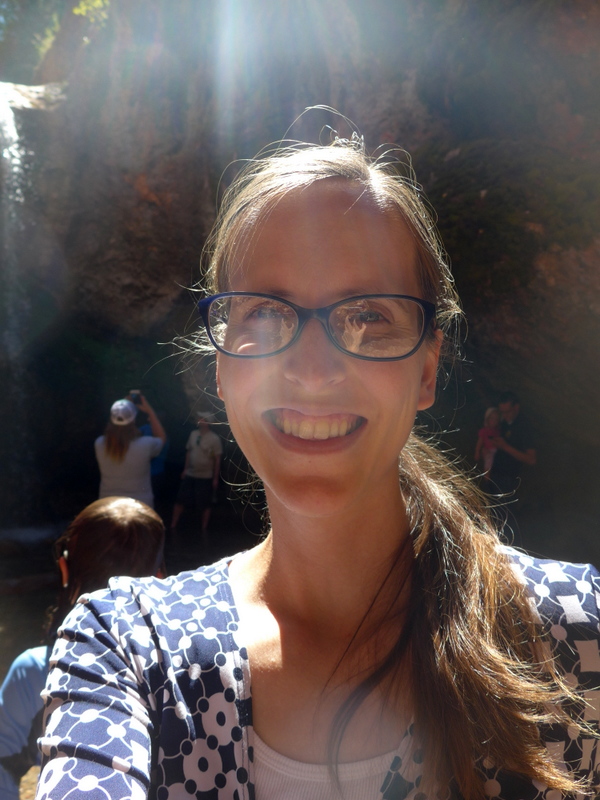 Benjamin also refused to get all the way wet in the falls (smart boy) and instead had fun playing in this little cave: 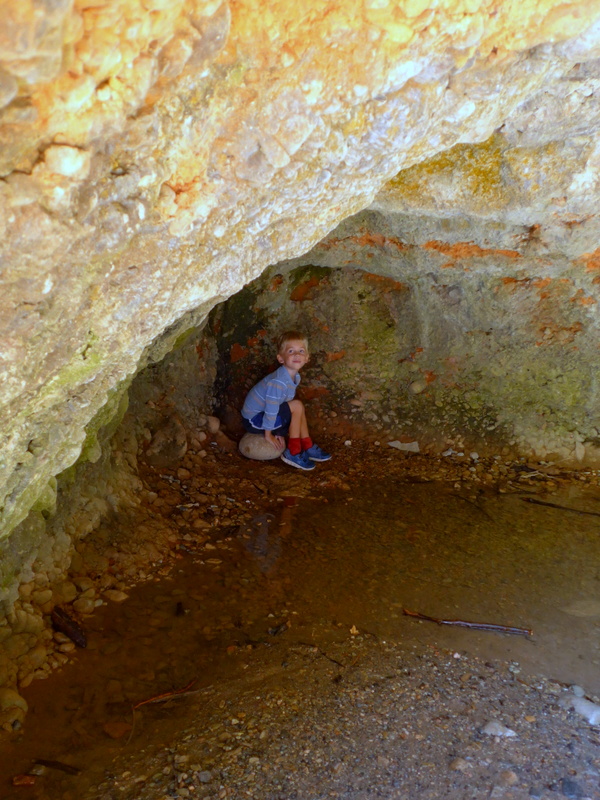 Here's everyone on a little bridge on our way back down: 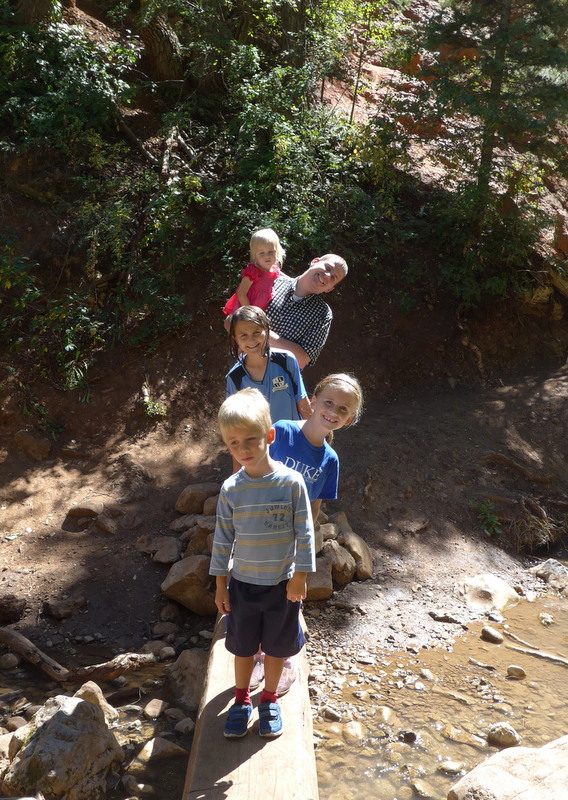 And here's everyone on another bridge: 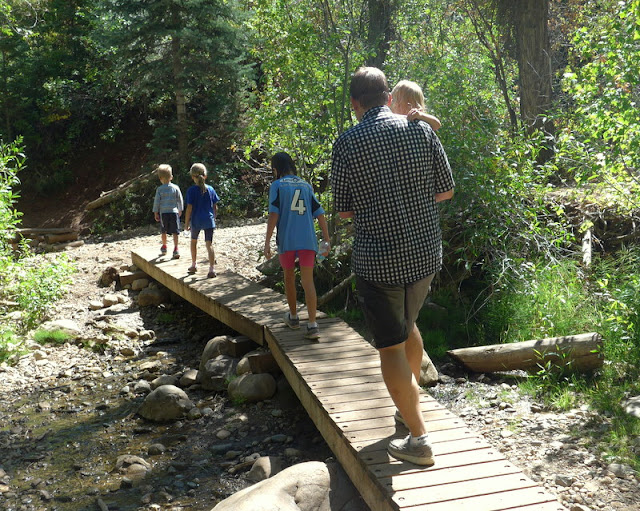 Going down went a lot faster than going up. We weren't stopping to run up the mountainside because everyone was wet and we didn't want them to get all muddy from sliding down and because hiking down was less physically taxing than hiking up was so the pregnant lady didn't have to stop to rest as often.

Here we are at the trailhead: 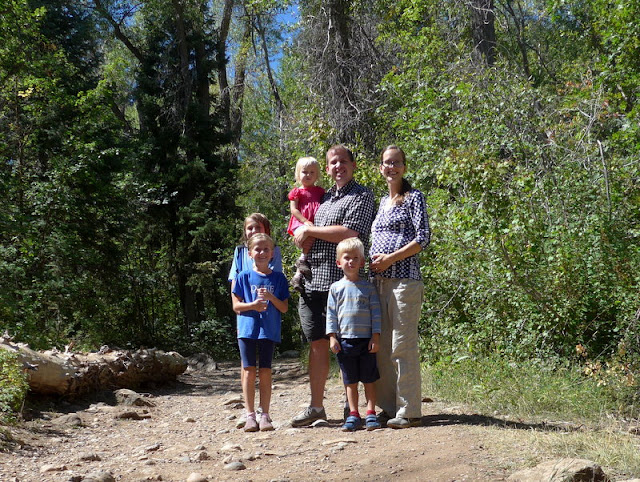 We were lucky to grab this one photo together. The kids were all thoroughly distracted/spooked by a little snake slithering nearby.

"Is it poisonous?" they wanted to know.

"Look at its head," Andrew said. "It's not triangular; it's the same width as its body."

"Then it's not venomous."

It's just that easy. And rattlesnakes will usually give you a fair warning if you're paying attention. Snakes are much easier to deal with here than in North Carolina!

We were going to stop by the city library but there was a big children's entrepreneurial event going on and the place was packed with booths of children selling homemade goods/junk and people milling around to buy it. Plus, I was so exhausted that Andrew was worried even visiting the library would be too much for me so he took us home and put me to bed and took the kids grocery shopping.

In my defense, in addition to being pregnant, I have a cold so reaching the point of utter exhaustion doesn't take much lately. I had a lovely two hour nap though and feel much better now.

* Apparently we have it in Utah but I have never ever seen any. In North Carolina I don't think you can be outside for more than two minutes without coming across poison ivy. It was in our backyard...and everywhere else in the state, from the mountains to the ocean.
Posted by Nancy at 6:29 PM