We did not make it to the Icelandic Festival this weekend, but we did make it to Dripping Rock! My mom came down to visit with us for a while (since yesterday was my birthday and we didn't have a big shindig) so we took her out hiking with us. 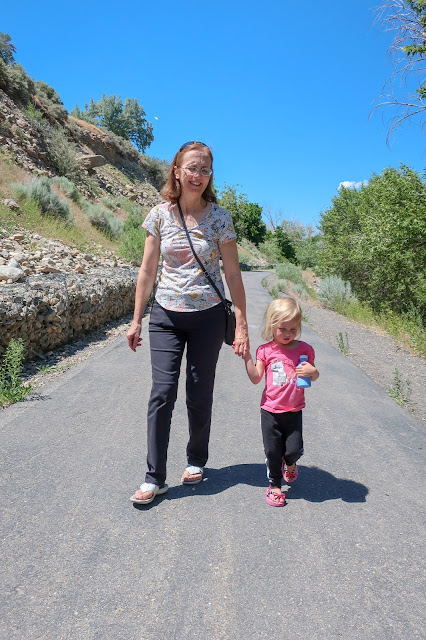 The trail is paved the whole way so it's perfect for strollers and toddlers and wheelchairs and everything. Be warned, however, that Google Maps won't take you to the trailhead for Dripping Rock. Instead it will take you on the road leading out to the windmills that runs parallel to the river. I made Andrew find the right parking lot (because I had mapped this out so many times when I'd tried to take the children there myself) and we eventually made it to the trailhead. The city had just repaved the official trail parking lots, but we used them anyway because we didn't see a sign saying that portion of the trail was closed until we were halfway through that portion. Oh, well.

The real adventure happens when you come to Dripping Rock, hike down the embankment, and explore the Spanish Fork River. It was initially chilly, but really quite pleasant. I'd say my bigger kids enjoyed it more than the splash pad (I know I did), but it was a little intense for the little ones. 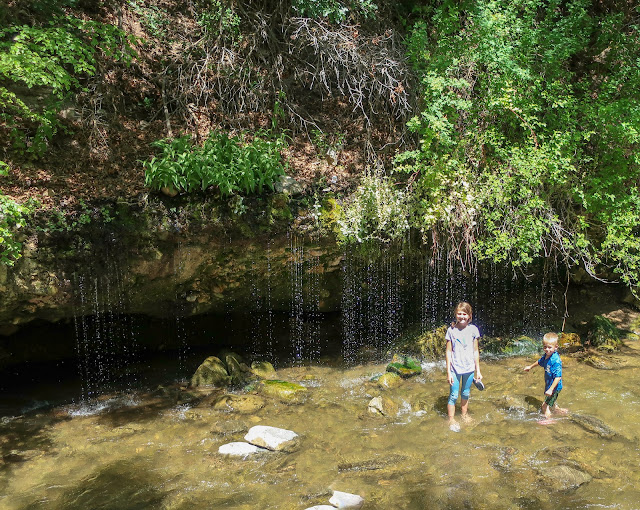 We are unsure where the water comes from. Any geologists out there know the answer? Is it groundwater or is it runoff from the canal? Anyone?

Here are the four oldest kids with me in front of the dripping water (it's really too much of a trickle to be called a waterfall): 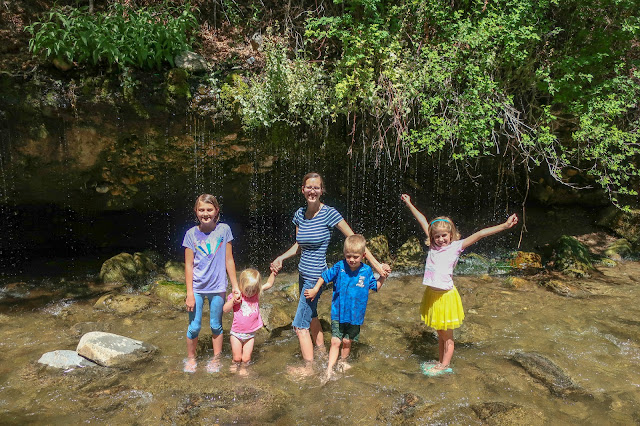 And here we are behind it: 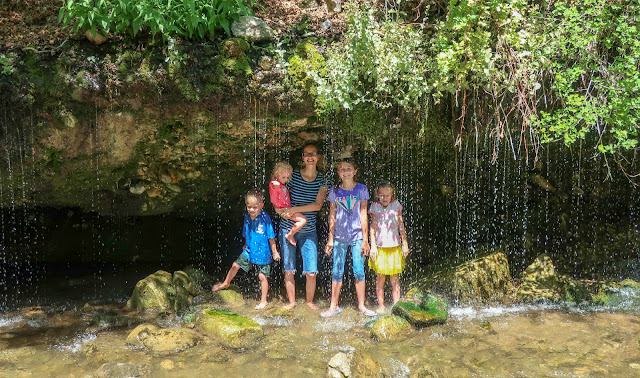 Poor Zoë got soaking wet (that happens when you're really short and you go wading) and begged to go home, so Andrew gave her a piggyback ride back to the van to wait for the rest of us. The older kids wanted to go exploring farther downstream so we waded all the way to another dripping rock getting plenty wet in the process. 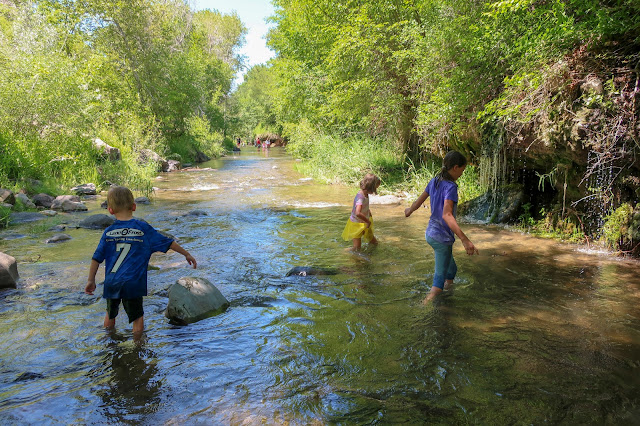 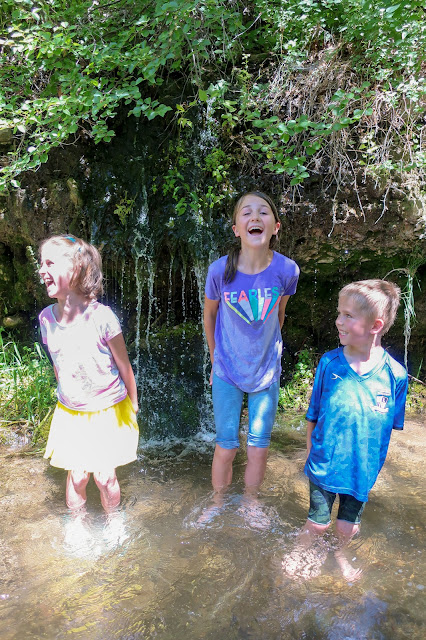 Benjamin has been wearing this soccer jersey for several days and nights now, so I was rather glad when it got filthy dirty and soaking wet because that meant I'd finally get it off of him. He's been nagging me about signing up for soccer (I think we can do that as early as next month) but his sisters told me that the real reason he won't take off this jersey is because it's the World Cup and he's super excited about it (perhaps that means we should actually have him watch some of it). 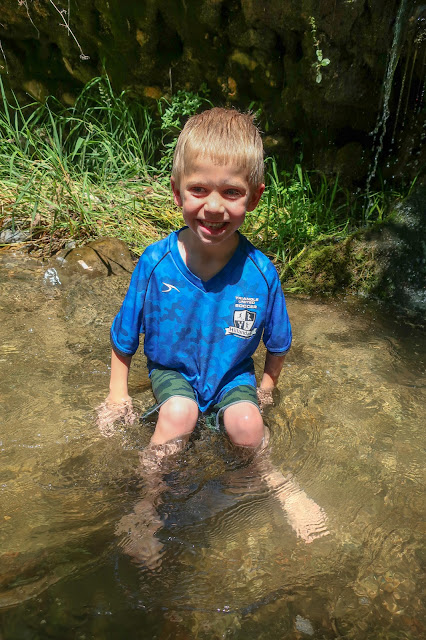 Anyway, here are the kids wading up stream: 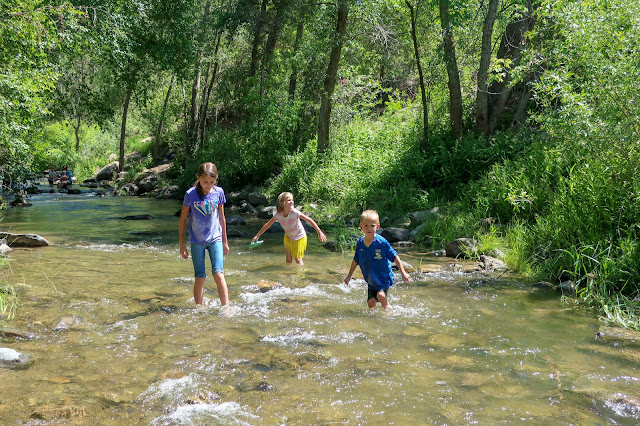 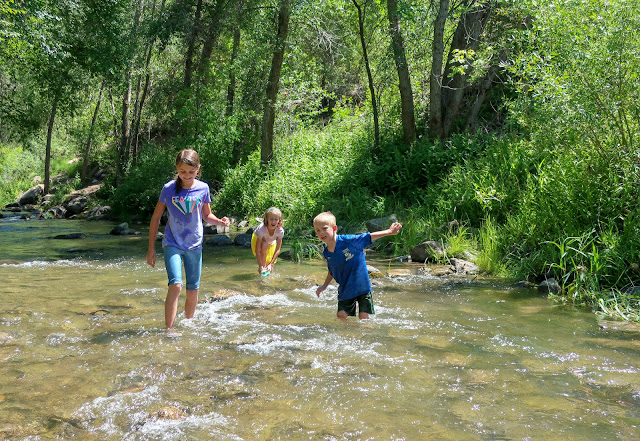 To get to the next dripping rock we had to cross over a waterfall, which was rather tricky for me because Benjamin wanted to hold my hand while he went over, so I had to try to keep my balance while he was using me to keep his balance. A kind woman on the bank came over and gave me her hand. "It's hard to keep your balance while helping someone else keep their balance," she said. "I just did this a few minutes ago!" That was rather nice of her! 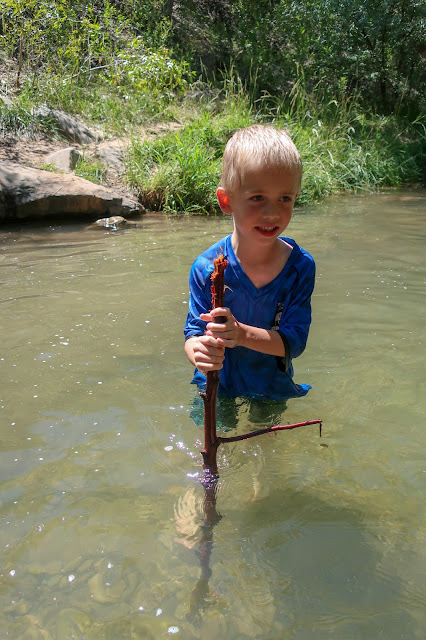 The rocks in this area jutted out creating a lovely little overhang and after much encouragement (I'm so glad she used that word because I was worried I was pressuring her a little too much—but if it was simply encouragement, that's fine, right?) Rachel finally swam behind the dripping water into the little cave behind. Her swim was very brief, but she did it! 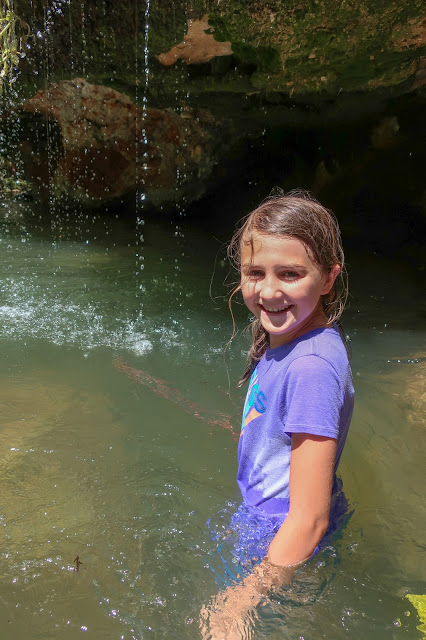 It looked pretty cool under there, really. If I didn't have Benjamin clinging to me for dear life (the water was pretty deep here (also I was worried about what to do with the camera because you can't really go swimming with a camera)) I probably would have gone inside with her. 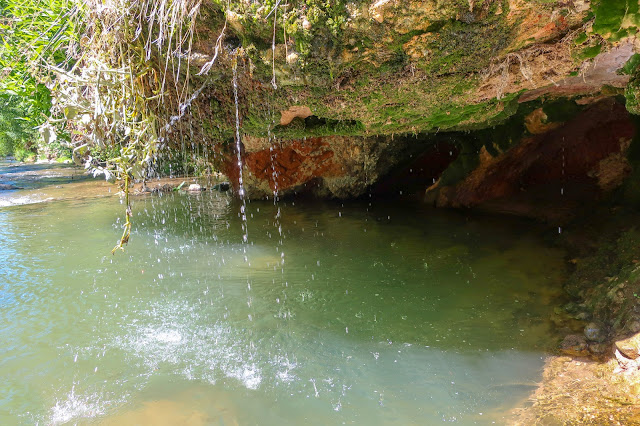 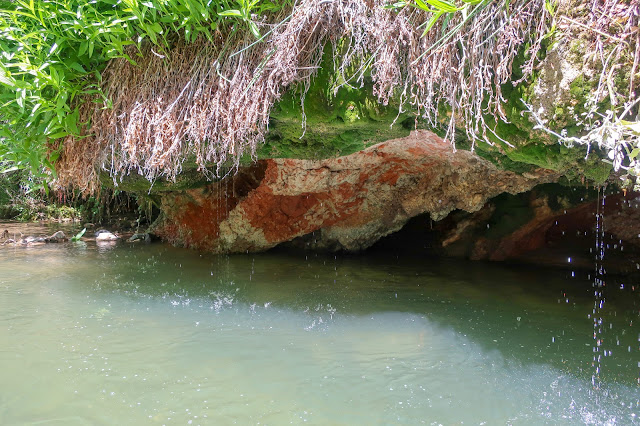 Her shirt says "fearless," which was ironically appropriate for today because Rachel is terrified of caves (and, more specifically, of mines). But she faced her fear, so kudos to her! The next time we go I'm sure she'll be even braver. 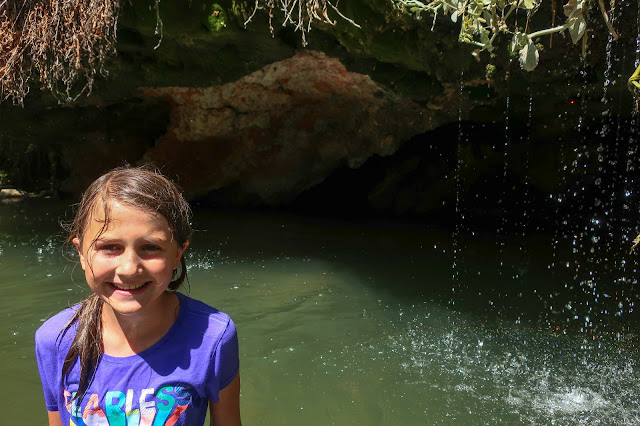 Speaking of the next time we go, we'll have to be sure to wear shoes that we can wear into the river and maybe even a few puddle jumpers to put on the littlest ones. The river isn't particularly deep but I think they would have been useful (at least for Benjamin's confidence) when it rose up to his chest. 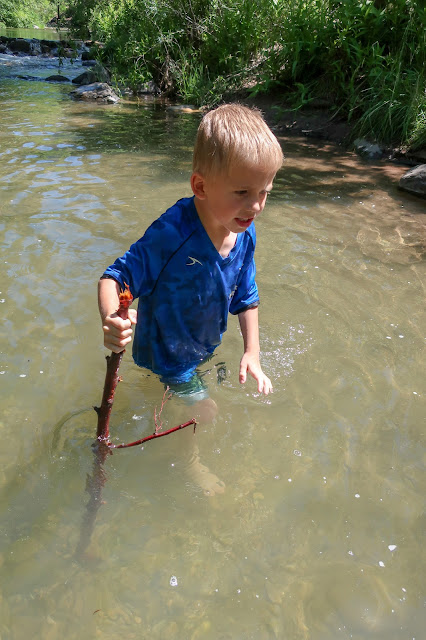 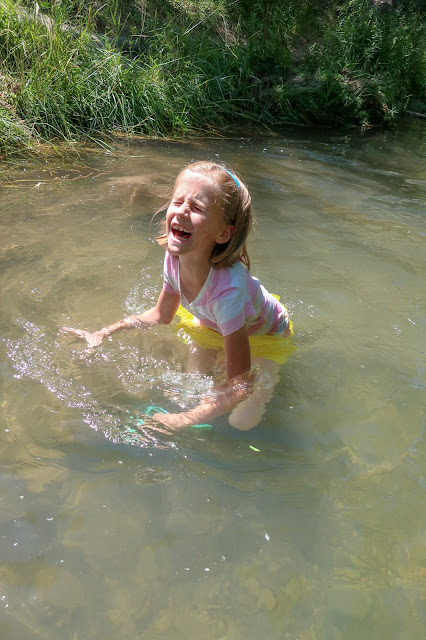 Poor Alexander had had it by this time and was up on the trail howling: 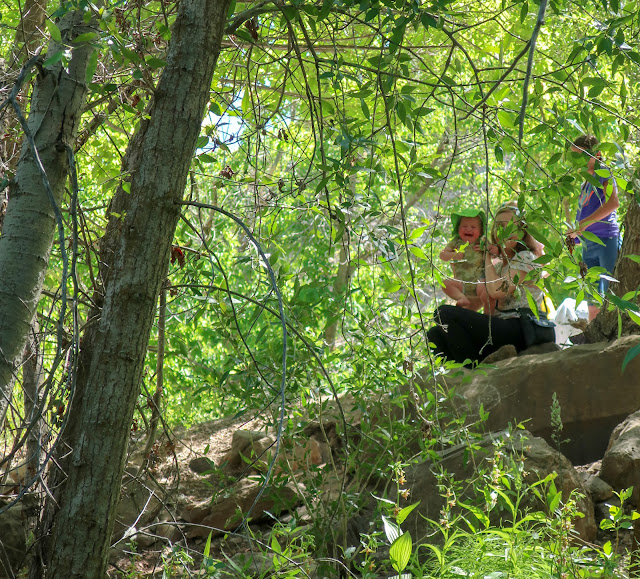 I sent the girls up to tell Naanii that Benjamin and I were going to hike back through the river to fetch his shoes (because I didn't want him to have to walk back on the hot pavement), so that's why they're up there with Naanii and Alexander (the rest of us had flip flops and just brought them with us). 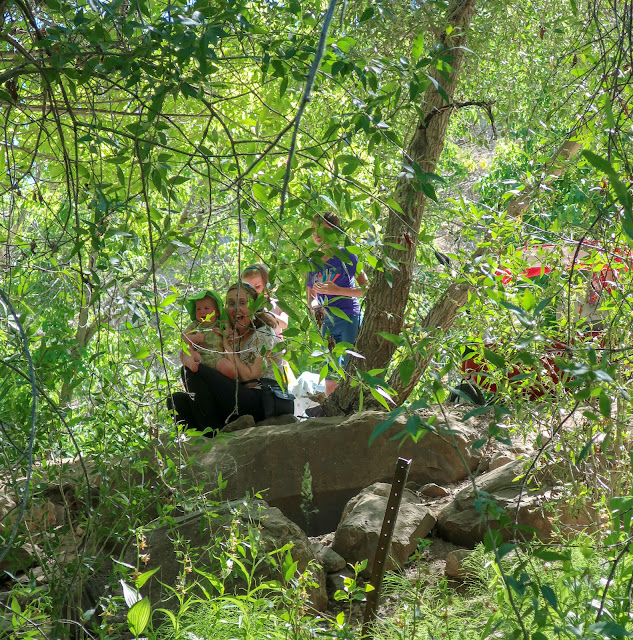 It was a pretty good birthday hike/walk. Hopefully we'll be back soon!