This evening I had my second session of my writing class, which has so far been surprisingly empowering. My sister sent me an article about parenting through grief several weeks ago when we were, you know, in the trenches of parenting through grief (not that the battle is over, but I don't feel like we're quite in the trenches like we were) and it said something about allowing yourself to neglect the kids and house a bit. When you hear that judgmental voice in your head saying, "Too much television is going to rot that child's brain," or "That laundry should have been folded days ago," to just thank that voice for its concern and send it on its way.

That was so helpful for me to read at the time.

No need to castigate myself for not having it all together because people don't have everything together in the best of times, so why should I have everything together in what could be categorized as one of the worst of times? (For the record, we're out of the trenches and my house still isn't tidy, but it wasn't before, and I don't think my children are really worse off for it).

I heard a similar thing tonight in my class. We made lists of our fears and our distractions and the judgmental voices inside our heads and then one of the teachers said to thank those fears, distractions, and voices for trying to protect us but we were going to forge ahead anyway.

And that was apparently so helpful and empowering for me to read that it spurred me into having a difficult but necessary conversation today.

But enough vagueness. I only meant to say that we did a writing exercise during class, which is one I feel rather familiar with because it's kind of the topic of this blog, but it went in a surprising direction, so I will share it here. The prompt was, "In this very moment..."


In this very moment, I’m sitting in my dead mother-in-law’s chair. More than my mother-in-law, she was my friend and confidant. I miss her and my heart is heavy, but I still feel an overwhelming sense of comfort and peace. In my visualization it was her…and yet somehow a future version of myself…who came to collect my fears.*

Outside of my window, though it is dark and the curtains are closed, there is an archway of snow that my son and I built together this afternoon when the snow was perfectly packable. While we worked, the baby crawled around tasting snow and the preschooler howled about everything because she’s always howling about something. But he and I just worked. And we created this beautiful, lopsided, wonderful arch. And we did it together, which is not insignificant because sometimes it is difficult for me to come up with things to do with him—this loud, energetic, firework of a child. 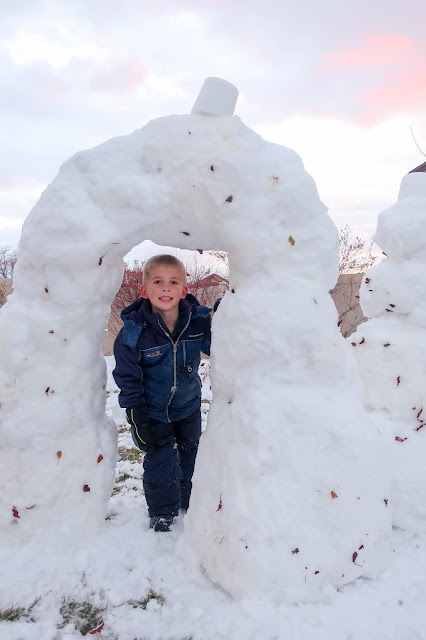 I do love building things with him, with all of the children: forts of blankets, teepees of apricot branches, arches of snow.

Is it an archway to another dimension? Is it the door to the castle of their imagination? Does it allow them to walk from the present to the past or the future? Does it open up in Europe or Asia or Jupiter or somewhere else entirely? Somewhere unknown. Are they an arctic explorer? Are they a little Inuit child helping to build an igloo? A dogsled racer? A knight in a castle? Perhaps they are daydreaming about being on a beach and playing in the sand rather than being stuck in the cold.

I don't imagine anything for myself. 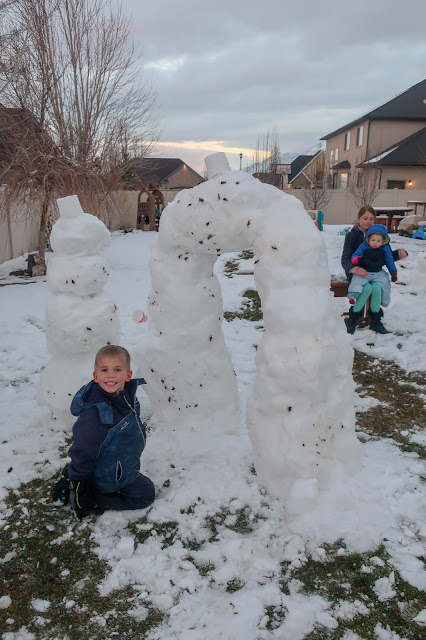 I hope my children's imaginations are more active than mine were as a child. I was always the serious one. The one who worried. And I worried about a lot because life was big and scary.

I’m envious of fiction writers—writers who can mold a world out of words. I've tried to create a world from scratch and I can't. I've never quite found a way to escape the world I'm living in.** Always, always, always, I was worrying about things that were happening. I never found a way to escape entirely. If I had had a better imagination, would that have helped shield me from the hard things in life? Can an imagination be cultivated or is it a gift? 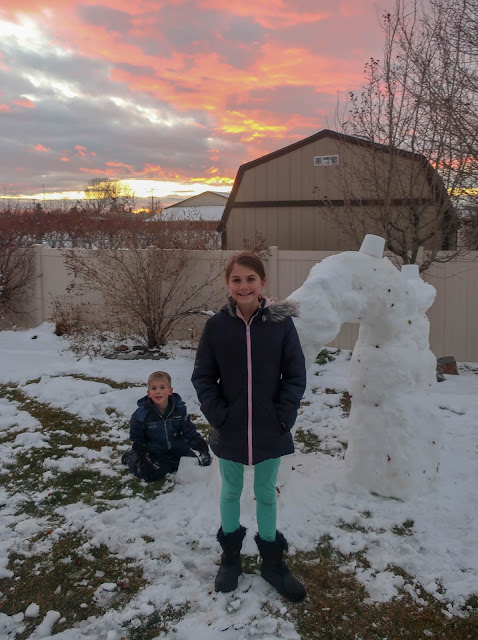 I believe most things can be cultivated, and so I try to do the things that I imagine will help my children appreciate imagining. And so I build—with snow in the winter and with branches in the spring and with blankets in between—these physical retreats hoping a mental retreat will accompany it.

Will building that archway be a memory for my little boy? Will he remember doing it with me? Will it help him create a portal to a secure and happy place that he can visit when times are hard?

In his mind, it was a grand castle, I think. He spoke of windows and turrets, a dungeon and a drawbridge. All I saw was snow—it looked, perhaps, like a tribute to the Delicate Arch—and then the baby fell down the stairs because I wasn't watching him properly. So I ran to him and held him while his brother continued fighting dragons. 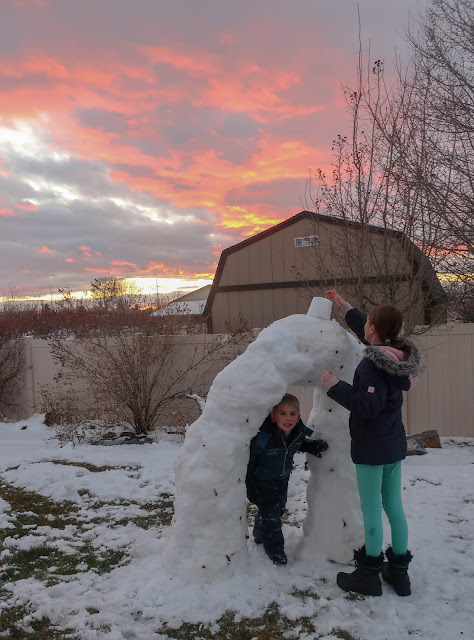 Why do I only imagine what my children might imagine? Why do I not simply imagine? 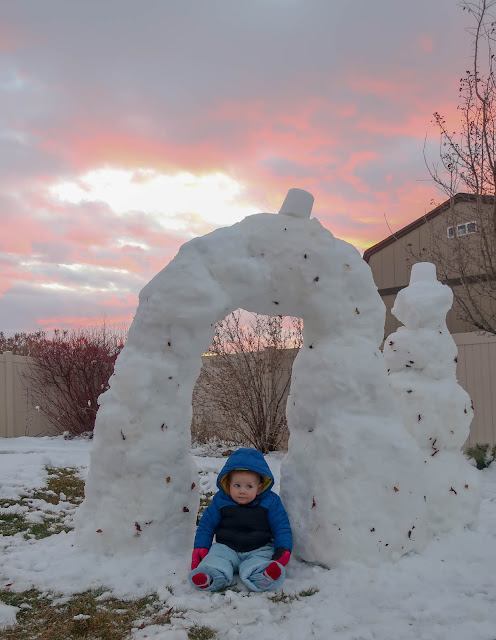 Further, I'd like to connect the idea of writing and building (though I didn't do it during the writing exercise) as two different strands of the same thread: creating.

One of our instructors (Kathy is her name; AshMae is the other) said last week that writing is wizardry of sorts. You feel within yourself that something that doesn't exist yet needs to be created and then you create it. Like magic!

Elder Uchtdorf said as much:


The desire to create is one of the deepest yearnings of the human soul. No matter our talents, education, backgrounds, or abilities, we each have an inherent wish to create something that did not exist before.

I was a crafty person in my childhood. I loved to make anything but now that I'm old and grumpy and unimaginative I look at craft projects and wonder (a) why would I want to make that thing and (b) where would I put it. So obviously I'm much less crafty than I was when I was ten!

But building temporary forts—of snow, of branches, of blankets—and writing like I'm running out of time? Those are creations I can—and often do—get behind.

* We did a visualization exercise where our doubts, fears, and criticisms were bouncing around the room and we had to collect them and put them into a backpack, which a "kind older woman" came to collect to us to take on a field trip so that we could write without those things in the room with us (and maybe they'd be back and maybe they wouldn't, but for now they were gone).

** Even my secret writing space in my mind (last week's visualization exercise that we built on this week) was based on reality. "Imagine you're in a yard and on one side of you is a house and on the other side are some woods." *POOF!* I'm standing in the backyard of our House on Hummingbird Lane. No imagination required...it's just 100% our old house. Now, my writing room was contrived, I suppose, because it was supposed to be a door we'd never seen, but it was just an extra door on our old house leading to my own personal space (which, for the record, is mostly just...empty).