We ended 2018 slipping and sliding down the hill at the "train park." It was rather cold today (it's currently colder here than in Prince George, BC, where David and Ruth live, but warmer than it is in High River, AB, where Abra lives) so we bundled up until we couldn't feel the cold anymore and played outside for about three hours!

I don't actually have snow pants so I wore two pairs of long johns under my jeans, the kids were nice and toasty in their snowsuits, and we got plenty of exercise going up and down the hill.

Alexander loved sledding so much that when he was waiting for his turn with a sled he would toboggan down the hill on his tummy. It was adorable (also note: Zoë doesn't pay any attention to me or anybody when she sleds, so watch out):

I brought our real camera with me but neglected to put a memory card inside, so instead I took pictures until my phone died (which means I probably took far too many pictures.

Here's Alexander getting pulled on a sled: 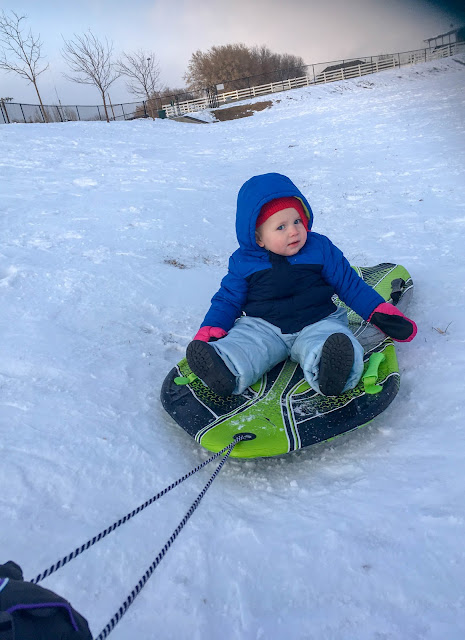 And here he is after he slipped off the end of it: 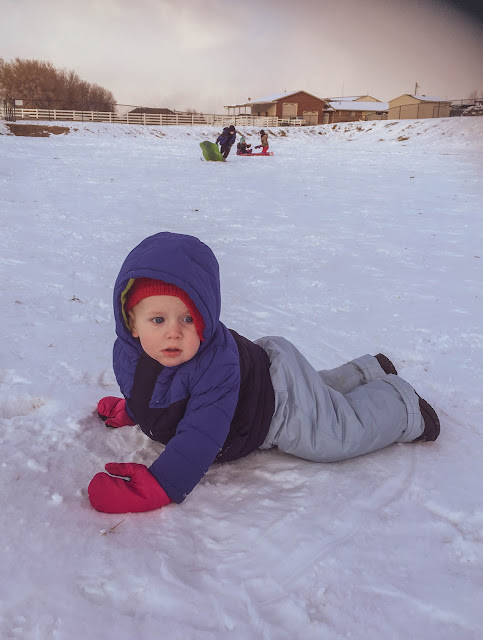 Zoë and Benjamin are wearing the snow clothes we got for them a size too big last year. Here's Zoë in the wagon, which travels over icy sidewalks much easier than the stroller. The wagon just plows right through/over chunks of snow, whereas the stroller gets caught on every little thing and threatens to fling its occupants out of the seat. So we've been using the wagon quite a bit lately. 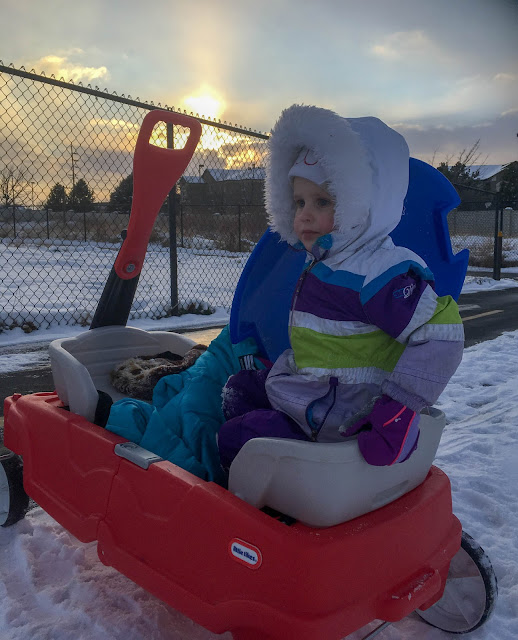 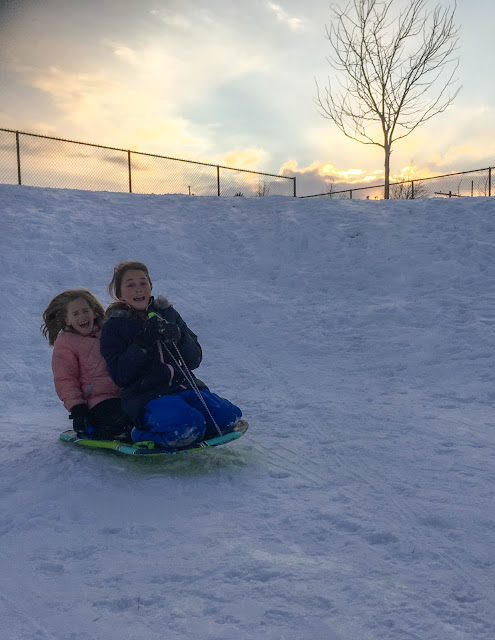 Here's Benjamin trying to snowboard down the hill: 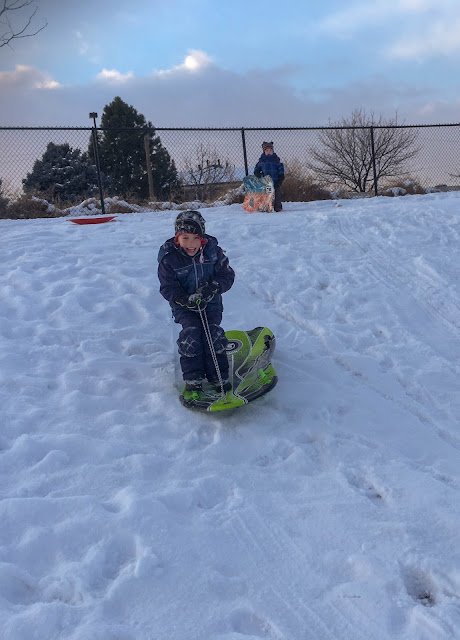 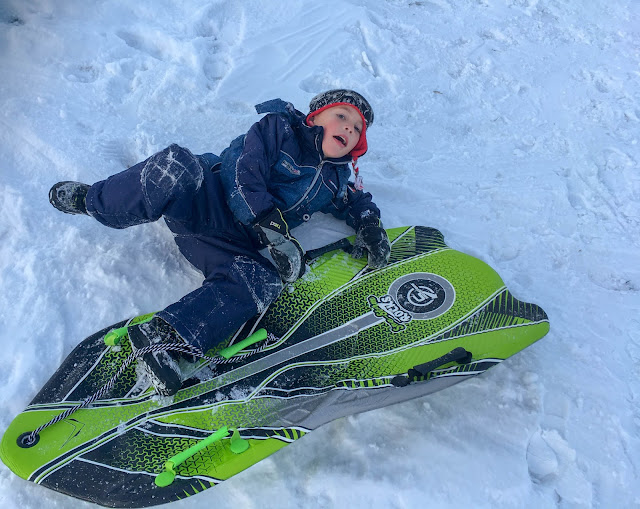 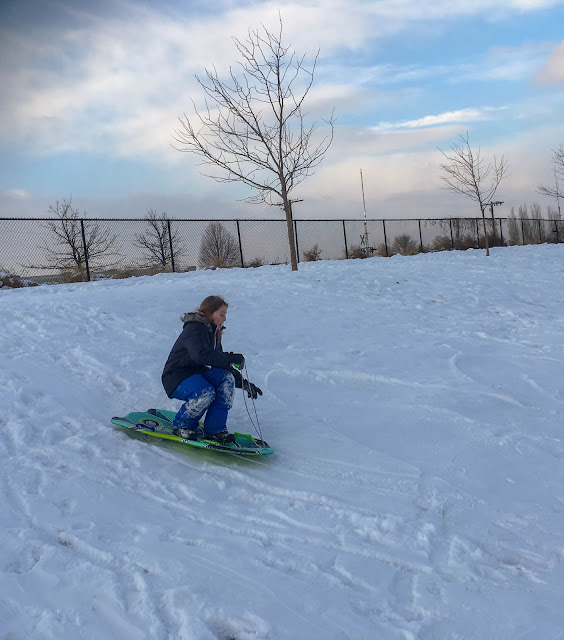 She was getting pretty good of it after a few practice runs: 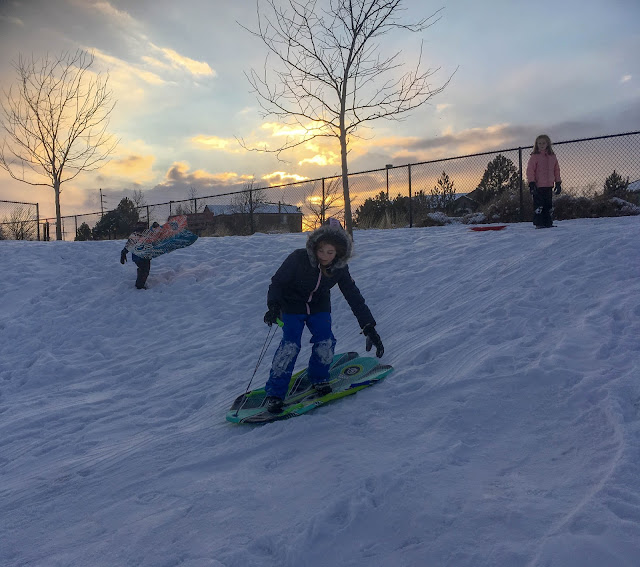 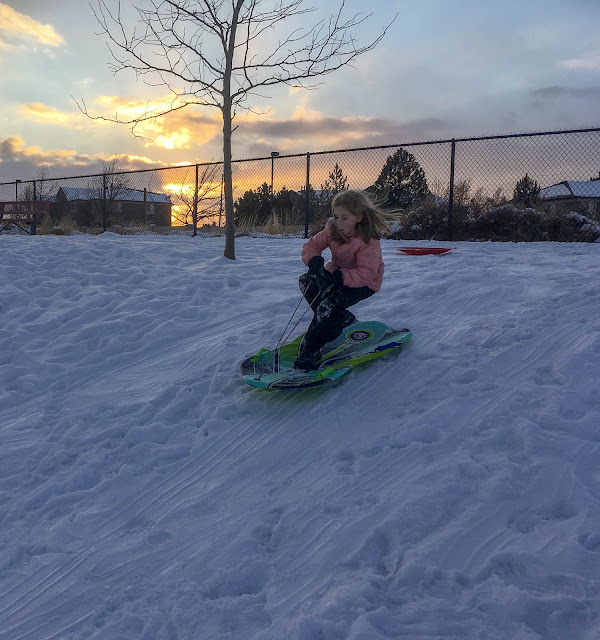 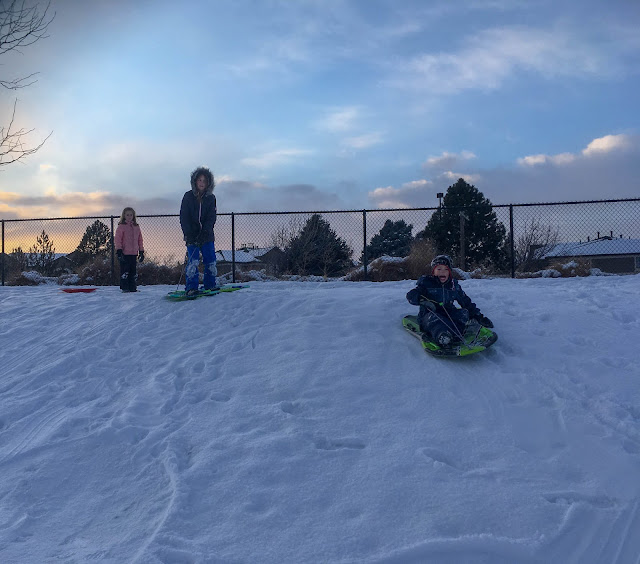 Here's Alexander crawling toward the hill: 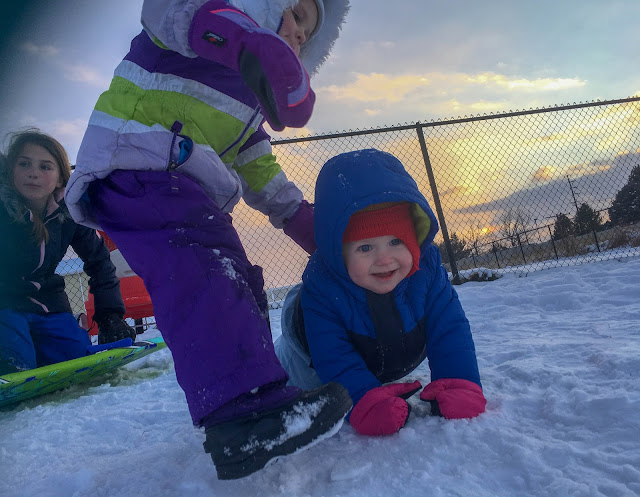 Rachel and Miriam preparing to go down: 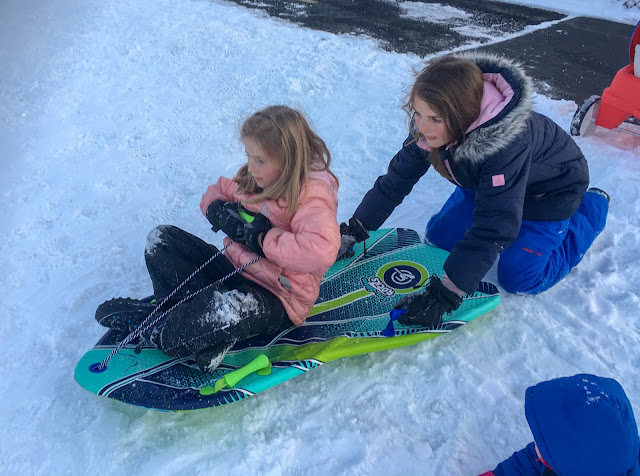 And here's me going down with Alexander and Zoë (while Benjamin and Miriam watch): 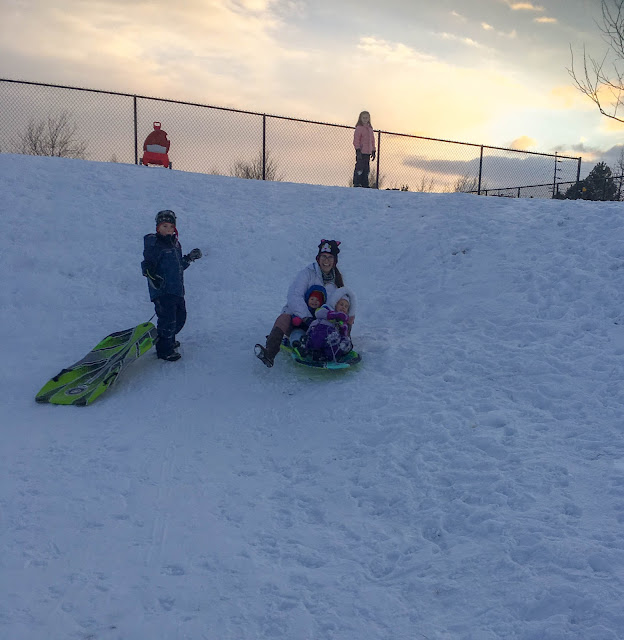 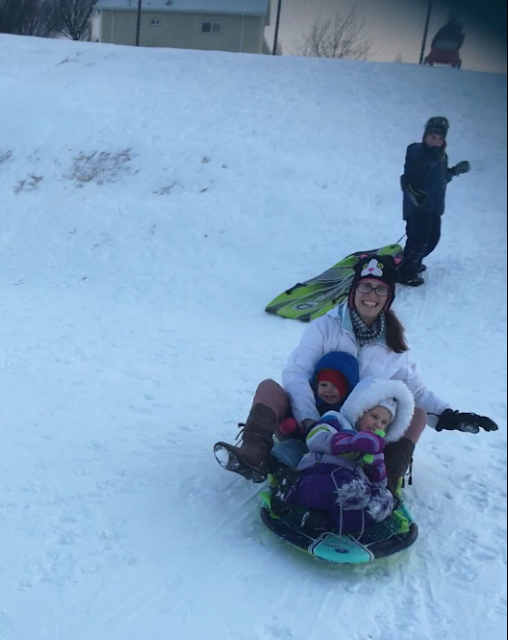 Zoë wanted to pull us back up the hill (but she didn't quite make it): 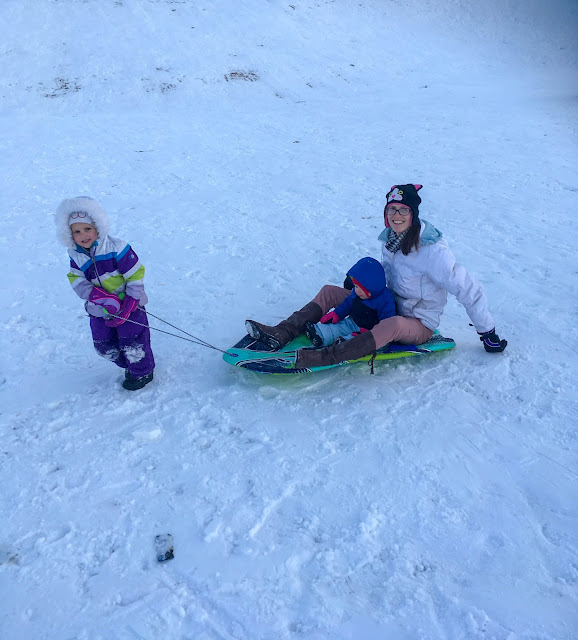 So I got off and let her pull Alexander for a while, which was much easier: 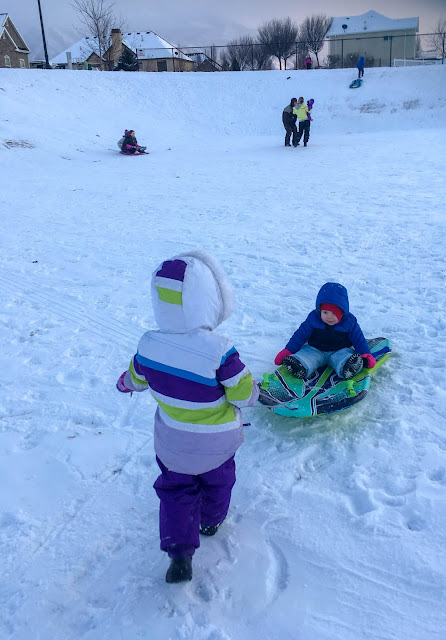 But still a little difficult: 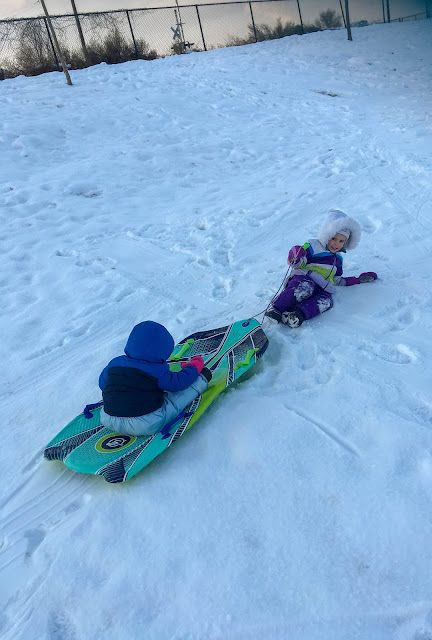 Here's Benjamin after a wipe out: 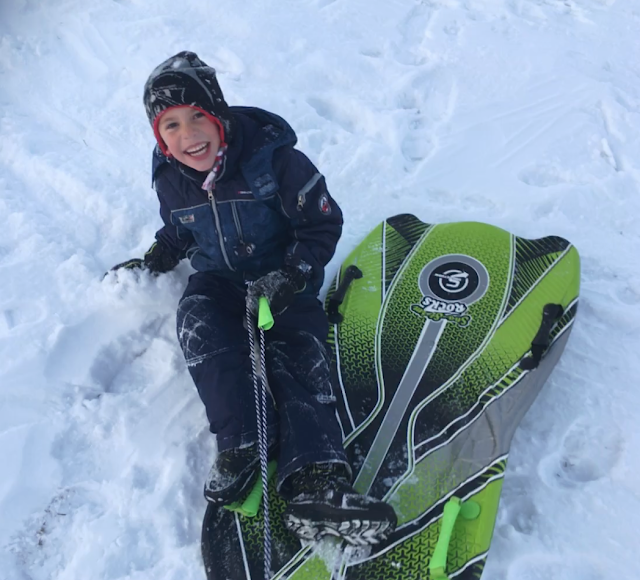 He really likes to roll dramatically off his sled so when I would go down with him (and Alexander) I would always make him promise not to tip the sled over. He also kept wanting me to go over the jump some kids had built, but I kept refusing. "Oh, come on, Mom!" he said. "It's not exactly like torture."

"That's supposed to convince me to go over the jump?" I asked.

I did not go over the jump.

Here are my three big kids coasting down the hill: 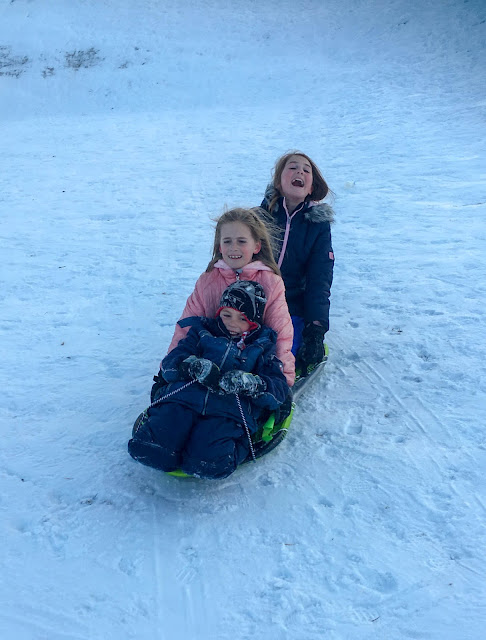 And here are my two little kids heading back up the hill: 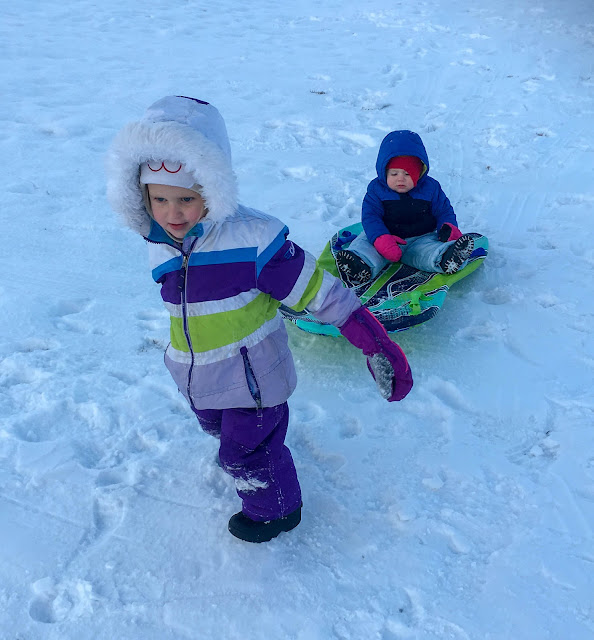 And here are my three big kids heading down the hill in a different order: 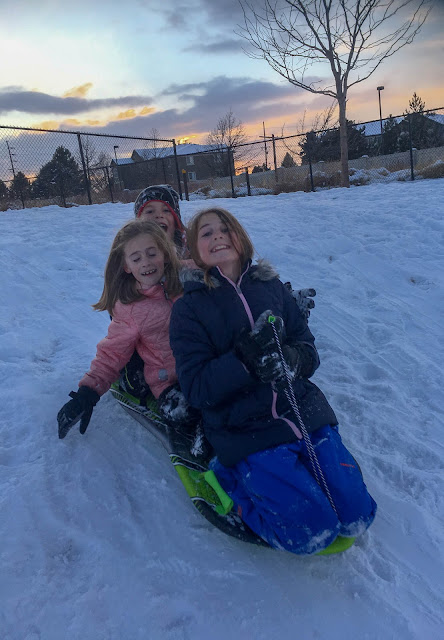 Here's Alexander doing his thing on the hill (I carried him up that hill so many times it isn't even funny; then I'd sit him down and he'd be back at the bottom as fast as he could): 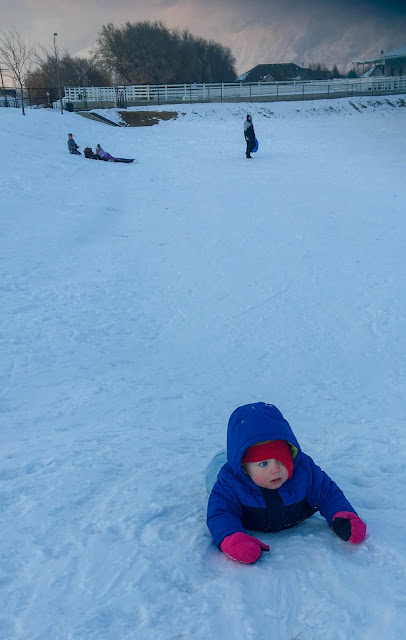 Some friends showed up at the park and soon the kids were going down the hill in a train of toboggans, with the child in front of the back sled holding onto the sled in front. I'm sure it was all totally safe (at any rate it wasn't exactly like torture): 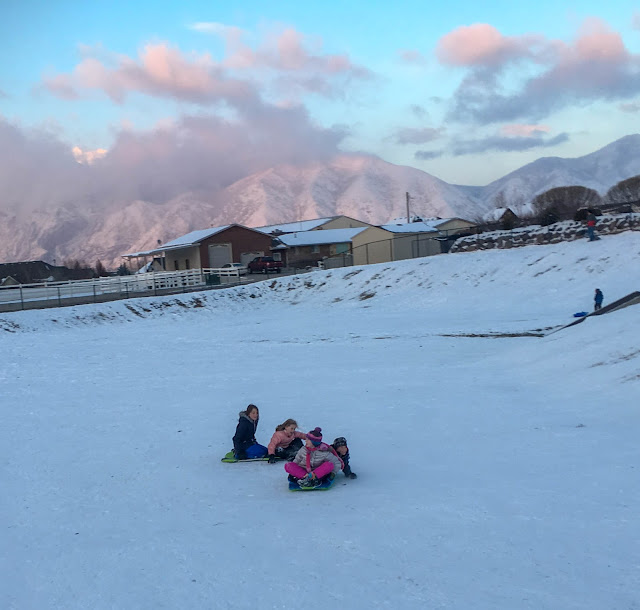 And here's Zoë taking her last slide down the hill before my phone died: 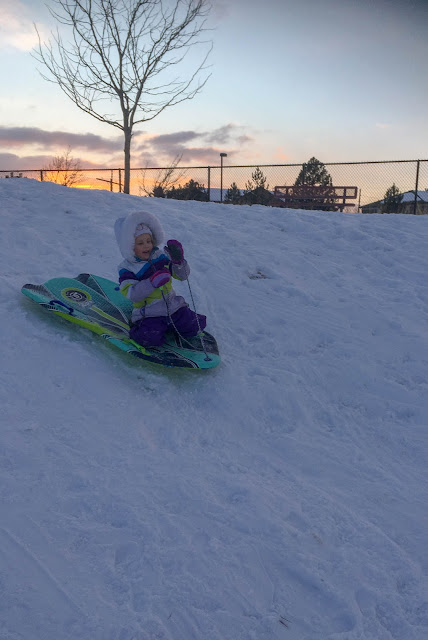 And then, if you can believe it (despite the lack of pictures and the cold), we stayed at the park even longer.

** I reserve the right to complain about hot/humid summer and about snow days that shut down the entire city/state.
Posted by Nancy at 3:32 AM