Rocking, Rocking it out, and Painting

The other day Benjamin and Zoë called me in to take a picture of them rocking their babies. I happily obliged because not every moment of every day is this cute. Benjamin was holding Alexander and Zoë was holding the newly christened Baby Carrie. 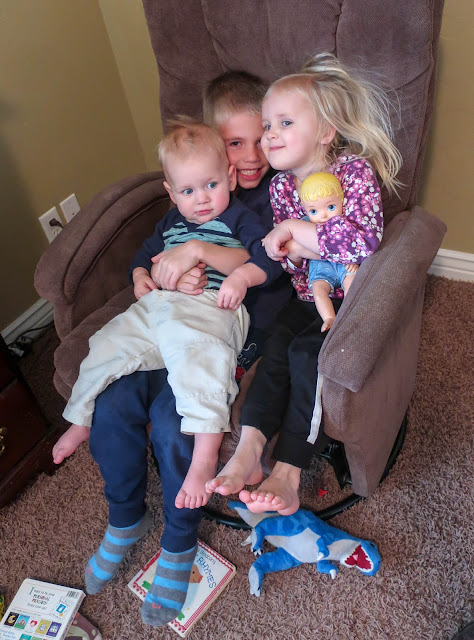 This poor doll has been through many name changes throughout her life. She was, at first, Cinderella. For a while she was Elizabeth. Zoë called her Lala for a while (which I believe was her baby talk for Cinderella). I truthfully can't remember what else she's been called.

Most recently (before Carrie) she's simply been Baby Doll and whenever anyone asked Zoë what her name was she looked at them like they were crazy and would say, "Baby. Doll."

But then we started reading Little House on the Prairie and the doll became Baby Carrie.

"And who are you?" Andrew asked her. "Are you Mary? Or are you Laura?" 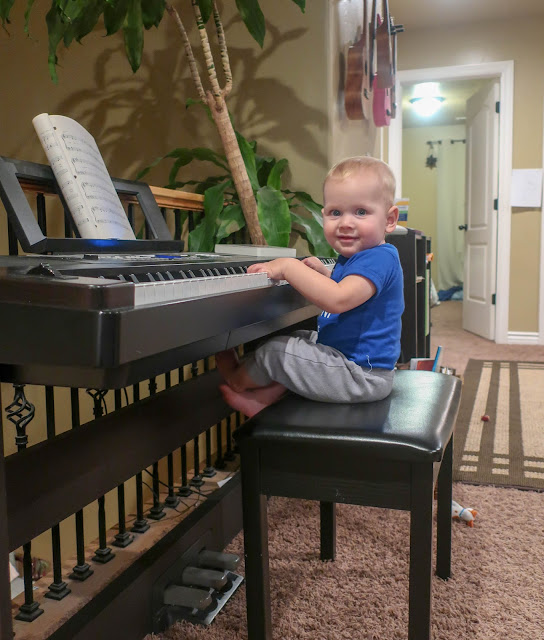 He took the job of tickling the ivories* rather seriously and wiggled his little fingers the whole time he was playing. *not real ivory 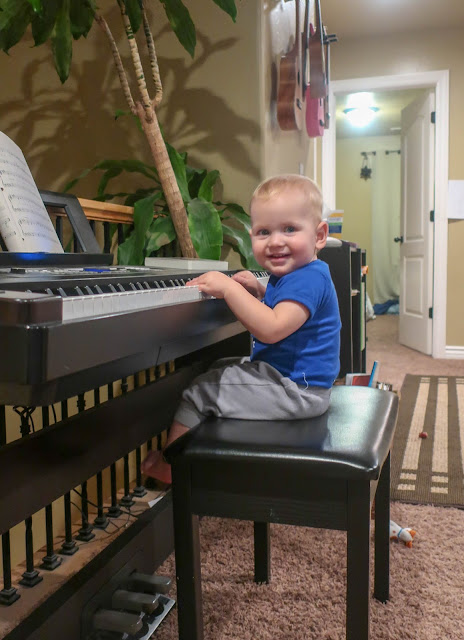 Here's a sample of some of the dancing that was going on at our house (Zoë's "monkey dance" was particularly entertaining):

Today Zoë had a grumpy day so there was very little dancing or singing. Instead she spent a lot of time painting. She loves painting and will do it for hours (or at least minutes) at a time. She's really pretty careful about it, though from the looks of our table you might not believe me (I have since washed it). 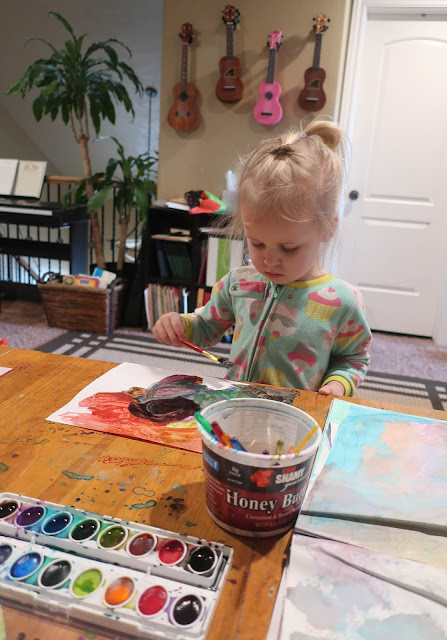 That mess was not entirely her fault.

Yesterday we got some new watercolours in the mail (because Zoë had used all our old watercolours up (and if I don't like going shopping)) and she opened her new paintbrushes and the sketchbook she got for Christmas just as the older kids were coming home from school. So she was joined by her siblings while she painted. They were the messy ones, not her.

Specifically Benjamin was the messy one.

I'm trying to imagine three-year-old-Ben's mom letting him paint while she put the baby down for a nap or threw a load of laundry in. It. Would. Not. Happen. Not in a million years.

Today's Benjamin painted with the fury of a tornado and knocked over the rinse container when it had reached its very apogee of turbidity. It was a huge mess. We paused to clean it up but then he just continued to make messes until I declared painting time over.

He, of course, also made some very beautiful paintings. But mostly he made a mess.

There is no way he could have handled such an activity at age three.

But Zoë? I can trust her to paint appropriately with minimal supervision.*

And that's fine. They were/are both fine three-year-olds...just different.

Zoë will sometimes paint flowers or other things but usually she seems to enjoy watching how the colours blend together on the page. She fills page after page after page with wall-to-wall colour.

She likes me to paint with her, so I usually do a painting or two, but then I have to go tend to Alexander who would like nothing more than to get his artist on. He can't be trusted with paints yet (everything is still going into his mouth*), so usually I make him stick to crayons (which still end up in his mouth, but this is better than paint somehow).

Even after Alexander and I leave her Zoë will continue to paint her little heart out until the entire table is covered with paintings. It's a glorious pastime.

*Speaking of which, writing that sentence made me think of this NPR piece about medieval female artists, which my friend Susanne shared recently on Facebook.
Posted by Nancy at 1:30 AM