C≠B, where C is the closet and B is the bathroom

Doing all this math elicits quite the dichotomy of feelings within me. I did so well on the "solving linear equations" section that I took a picture of my notebook to send to Andrew: 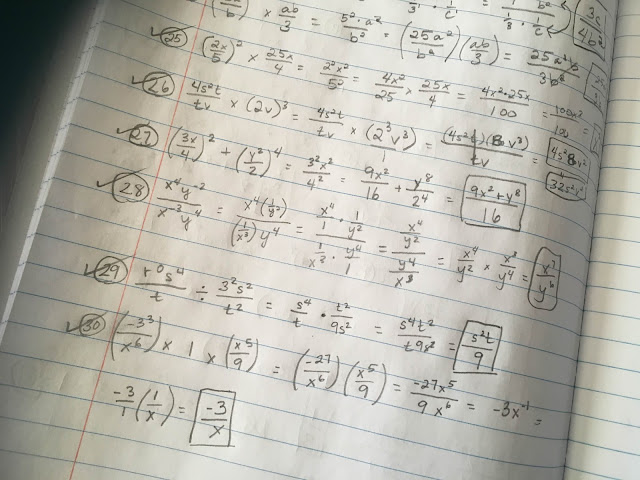 And then Alexander scribbled all over my beautiful work (because colouring is his favourite): 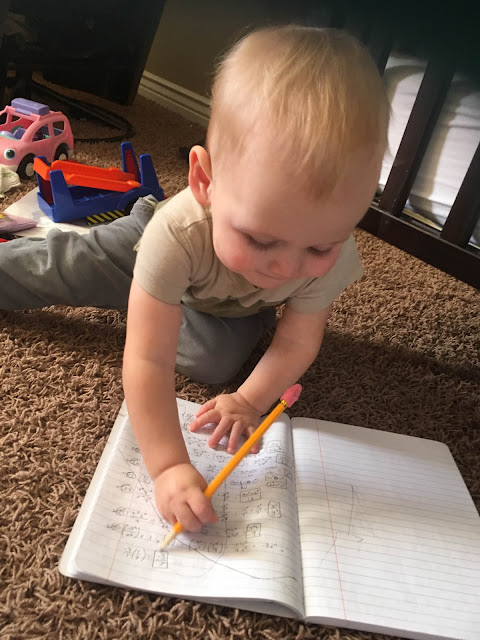 The section on "solving quadratic equations" took me three painstaking days and had me muttering wild incantations while I worked (including, "x is equal to negative b plus or minus the square root of b squared minus 4ac all over 2a" as well as gems such as, "Why isn't this working?!" and "Oh, they probably want me to _________ first."). Andrew was laughing over my mathematical narration, but pooh, pooh to him! I got through the unit understanding quadratics just a little bit more than I did before. To be fair, he is also 100% supportive of this endeavor and has given me spontaneous tutoring sessions multiple times (sometimes it pays to be married to a statistician).

Tonight I breezed through the unit on "solving inequalities."

I still have quite a lot of review to do before I can start actually studying for the test, but I'm glad to be ending today on a high note again. I have been finishing my evenings with math for the past few weeks and so I always go to bed either feeling like a mathematical genius or like this test is going to kill me.

This evening as I was finishing up, I heard someone stir in their bed. I listened for a few minutes and noted that it was Benjamin. He's a pretty responsible waker-upper so I let him be (had I determined Zoë was the culprit I would have coaxed her out of her room to remind her that when her body wakes her up in the middle of the night it's to go potty (I don't want to jinx us but I think she's finally trained through the night)). Benjamin is pretty self-sufficient in the night, however, so I let him be.

He didn't ever come out of the bedroom, but that wasn't unusual. Sometimes he gets up to adjust his music (he and Zoë have been listening to primary songs lately) or to get a drink or to pick up a dropped stuffed animal from the floor (he's on the top bunk).

Then I heard the closet door open, which was odd.

And then I heard a hissing sound and instantly I knew what was happening.

"Benjamin, no!" I shouted, jumping up and sprinting into his bedroom.

I flicked on the light and clapped my hands a few times.

He stopped and looked almost at me.

"This is your closet, buddy!"

He was so confused it took him three attempts to find the bathroom (Andrew and I were laughing so hard as we tried to guide Benjamin through his sleepwalking confusion). Poor Andrew had been so worried by my outburst that he had come running as well. He figured Benjamin was sleepwalking (not because Benjamin often sleepwalks, simply because I was yelling at Benjamin to wake up) but was afraid he had been standing up in his bed walking around or something dangerous like that.

"Nope, just peeing in his laundry basket," I sighed.

There was pee dripping down the wall of his closet as well. That was fun to clean up.

I think the poor boy is just overtired, so we're going to have to be strict about bedtime this coming week (which, in theory, should give me more time for math practice (yay)).
Posted by Nancy at 2:45 AM