I got together with some old friends tonight and it was so great to get to see them! We go back a long time. Let's see... 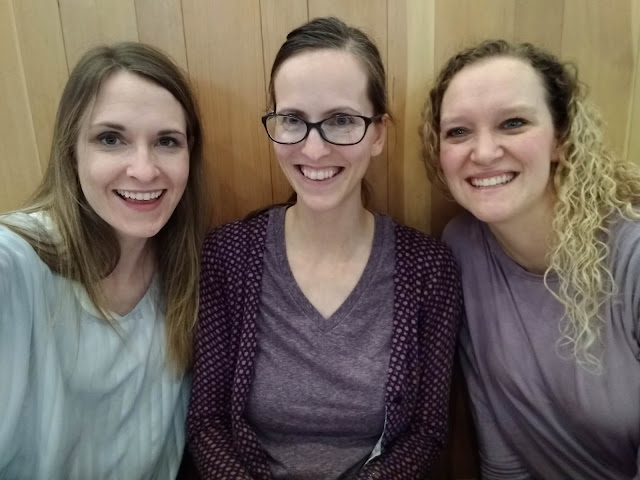 Courtney and I have been in three different wards together. She was in our Parkland ward when our family moved to Calgary (the end of 1994). My family moved to High River before the start of the next school year and Courtney's family moved very soon after we did, so naturally we were in the same ward again because there was only one ward in High River (and it encompassed several nearby towns as well: Nanton and Cayley and so forth (now there is a ward and a branch in High River)).

Amy's family moved to High River from Oregon that same year, but in the middle of the school year, I believe.


Somehow I hadn't realized that we all moved to High River the same school year, but I guess we did.

So, anyway, these were some of my dearest friends in the Young Women's program.

Rachel was excited for the change in the YW program this year because out of all the girls in her class she has the latest birthday, which means she would have been leaving primary last. I had almost the opposite problem. There were three girls (who came to church consistently) in my class. I turned twelve in June and the other two didn't turn twelve until the very end of the year (November 29 and December 6), so it felt like for months I was all alone, the only lone new Beehive.

Courtney and Amy are a year older than me, so I spent a lot of time with them in Beehives and Mia Maids and seminary and YW camps and high school.

Middle school is a different story because middle school was so miserable that I opted instead to do an online program.* Amy's program followed suit and her mom (who would later be my very first seminary teacher) let me join in some "electives" that parents were supposed to be in charge of teaching (her mom was a stay-at-home mom and my mom worked full time). So Amy and I got to be pretty good friends that way. We did PE together (her mom had keys to the church so we'd use the gym, or we'd skate on the lake, or do any number of things) and Home Ec (of sorts—we baked things and did a lot of baby-watching).

When I was in grade nine and Amy was in grade ten we competed in a musical festival together. Her mom made us these lovely blue dresses and feathered fans. We sang "Sisters" from White Christmas and our friends Mark and Dallin came in and took over singing. It was a rather hilarious routine.

Amy and I sang together quite a bit, actually. We sang with our friend Andrea for Andrew's sister Raeleen's wedding. And...other times...I'm sure.

Courtney's mom, Nancy, was our Beehive advisor, so we'd often have activities at her house (and later her house became a very popular hangout, rather...Dallin's house...which was in Nancy's basement because Nancy was married to Dallin's grandfather, making Courtney Dallin's aunt, even though he was just two years older than she was).

My family moved to Utah in the year 2000. Amy's family moved to Utah the following year. Eventually Courtney moved down to attend BYU and we were actually roommates over a summer (which is how we ended up being in three different wards together: Calgary, High River, and BYU).

All three of us married Utah boys, so here we all are in Utah still!

Courtney and Amy revealed this to be a dream come true for them. For me, it's not. In fact, "He's from Utah" was a rather heftily weighted item in my "con" column when I was considering marrying Andrew—because Utah draws people back in like a magnet and I don't reeeeeeally love it here (sorry, not sorry) so I wasn't sure I wanted to be that firmly rooted here. Obviously the "pro" list ended up being unquestionably lengthier than the "con" list and I'm every so happy (and somewhat surprised) to have found my very own Utah boy—but have you seen how we've ping-ponged in and out of Utah over the last 13 years?!

"To each their own," Courtney replied when I disagreed with her and Amy about being unequivocally happy to live in Utah (because I would move back to Canada (or anywhere—Georgia's nice) in a heart beat).

So clearly we don't agree on everything.

We never have. But friends don't have to agree on everything to be friends.

We did quite a bit of growing up together and have done a decent job keeping up with each other over the past couple of decades?! Seriously—decades. How?!

We have 15 kids between us (Amy has 6, I have 5, Courtney has 3.5) and though the topics of our conversation this evening were wildly different than the things we talked about at 14 (we mainly talked about those fifteen children and childbirth and the effects moving has on children and school systems and cold weather and missions and Russia and jobs and graduate school and army life and everything that three women need to talk about after not being together for years and years) it was so easy to talk to these girls!

I'm so glad we got together!

* Andrew suggested today in a conversation with some other friends (April and James) that he doesn't believe that online programs are as beneficial as on-campus programs (even though I'm planning on doing an online master's degree), but, honey... come on. I guess we mostly talked him around to accepting that online learning might be better for some situations (like GE courses). I can see how class time is absolutely important in many fields as well. But that doesn't mean online learning is less beneficial than learning in a classroom.
Posted by Nancy at 1:43 AM