I've put off going through the pictures from Karen's funeral for two solid months now. There's no reason for it, in particular, other than that life keeps marching on. I didn't do it right away and so it go swept under the rug (along with the billion other things I haven't documented in my life). It's not particularly painful to go back and look at the pictures because although it was a hard day it was a good day. I just haven't looked through them until now.

But I had to pull them up yesterday so that I could find this picture of my mom (and me (and Alexander and Kathi and Sister Starr)) with my mom's cousin Burt: 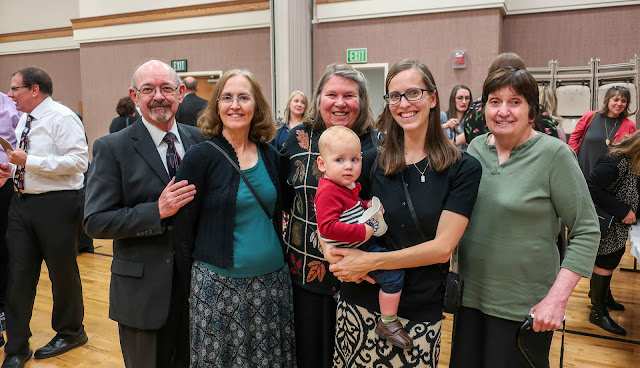 Burt passed away suddenly yesterday (the details of which you can find here), so this was, unbeknownst to any of us, our last visit with Burt. I suppose that's often the way of things—sudden and surprising. Even things that unfold slowly can feel sudden and surprising.

It was so nice of Burt and Kathi to drive all the way from Idaho to support our family in our sorrow. That's what struck me the most looking through these pictures—all the people, from all the places, from all the chapters of our lives, who showed up to mourn with us (and to lift our spirits).

So this weekend I'll be making a trip up to Idaho to do the same thing for Burt's family.

Interestingly, Burt and Kathi lived in Andrew's family ward while he was growing up, so Andrew knows Burt probably as well as I do! When we'd visit my aunt and uncle in Orem (before moving to Utah), we'd often also stop by to visit Burt and Kathi and after we moved to Orem I would sometimes babysit their grandchildren when their grown kids came to visit or would pop by to feed their cat while they were out of town.

They still lived on the house in the corner when Andrew and I moved in with his parents (not that that's a theme in our lives) after our Egypt adventure.

Burt was one of the kindest people I've had the pleasure of knowing, and really Kathi, too. They're both such wonderful people. Burt is the only man with a beard that Alexander has ever tolerated, so that alone speaks to what a welcoming personality Burt has (or perhaps it was because they were almost birthday buddies, with Alexander on the 14th of October and Burt on the 15th).

I'm so glad that we stopped by to see them on our way home from Canada in May!

Anyway, fishing out this picture motivated me to go through the rest of the pictures from November 17th, so here are a few for you to enjoy:

Karen wanted a Cookie Kegger social after her memorial service, and everyone seemed to enjoy it quite a lot. It was such a great opportunity to visit and reminisce and enjoy some dessert before dinner: 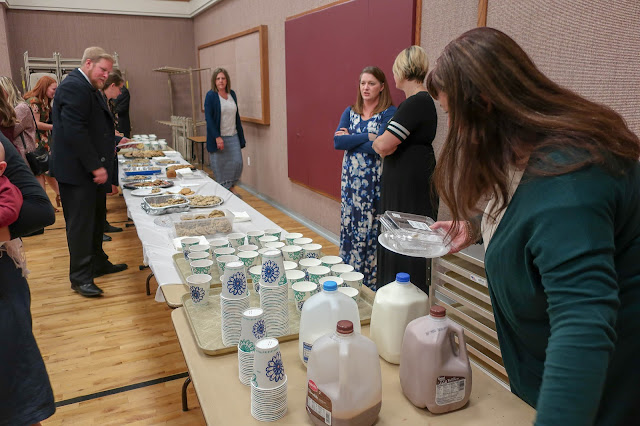 When Reid and Karen were called to serve in a BYU student ward (Reid as bishop and Karen...as...bishop's wife...I guess) they wanted a fun activity at the beginning of their tenure to allow the kids in their ward to socialize. Karen planned to make roughly a billion cookies and wanted a catchy name for it. She asked Andrew and me for input at some point and, I don't want to brag, but the name Cookie Kegger was kinda sorta my brainchild. I'm so glad Karen chose it!

It's hilarious because BYU is a notoriously dry campus.

Anyway, back to the present, or at least the more recent present than August 2010!

It was fun to get to mingle with old and new friends all at once (for me; it was probably less fun for them since they all didn't know each other but, honestly, there were so many people there that everyone had at least a small group of people to visit with).

Here's Miriam's friend's family, on the left, with Sister Foley beaming at me from the center. I love Sister Foley! She helped organize a cookie brigade from the Orem ward to contribute to Karen's Cookie Kegger: 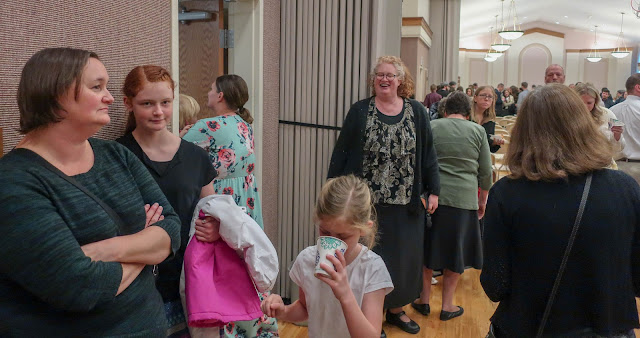 Here are some of my favourite Gillespies (Willie drove all the way from Idaho; also, sorry, Diana, I caught you with your eyes closed, but you're still sweet): 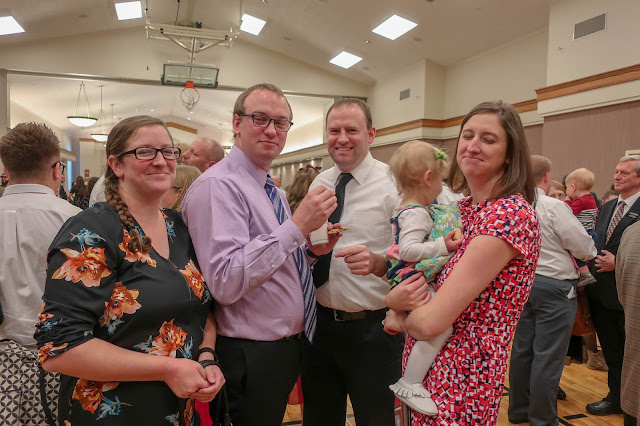 The Gillespies were immeasurably helpful in helping all the Heiss children process their emotions. They were empathetic, they were patient, they were full of good advice and humour. And they keep checking up on us. They've been wonderful. 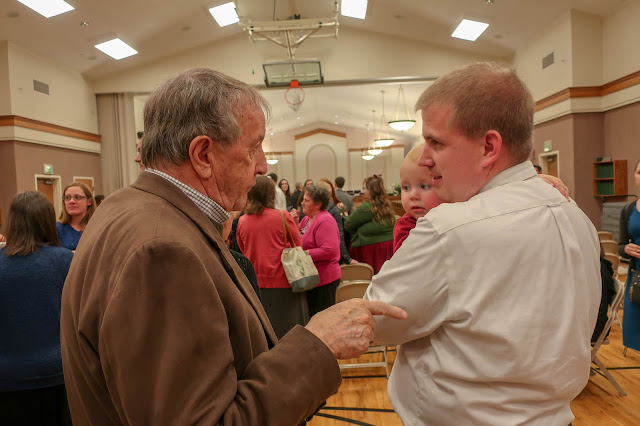 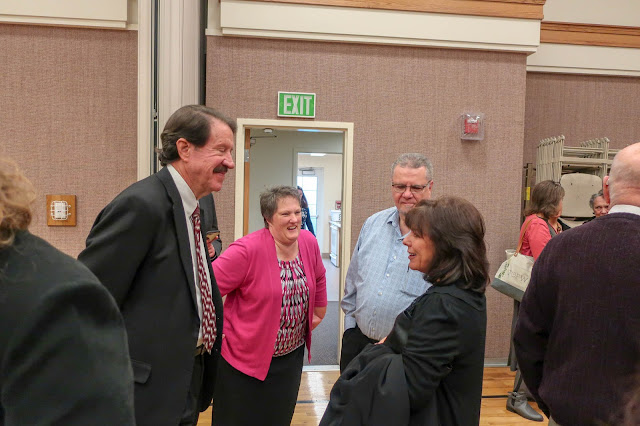 Here's Reid visiting with the Gardners (I think): 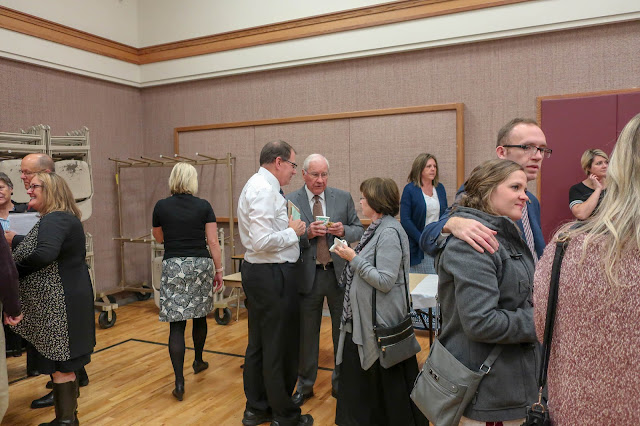 Here's Burt waving to someone (perhaps to Brother Christensen; Brother Gillespie is standing by the door in the back): 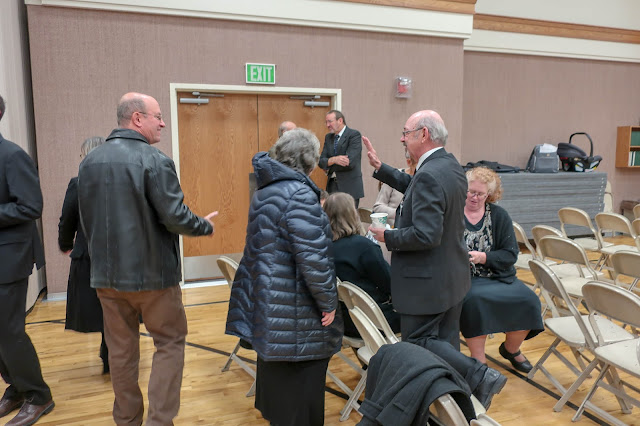 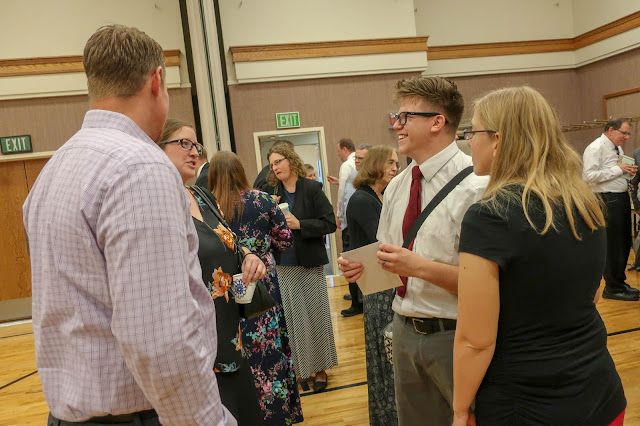 At some point I handed my camera to Josie because I was having a hard time visiting and keeping my children stocked with cookies and taking pictures. Plus I wasn't even sure who to take pictures of. It felt kind of weird to be snapping photographs, but I think it was a good thing to do. 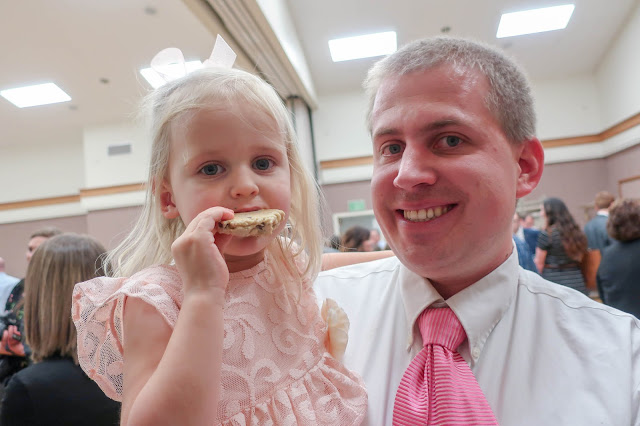 Here are a couple pictures of people milling and visiting: 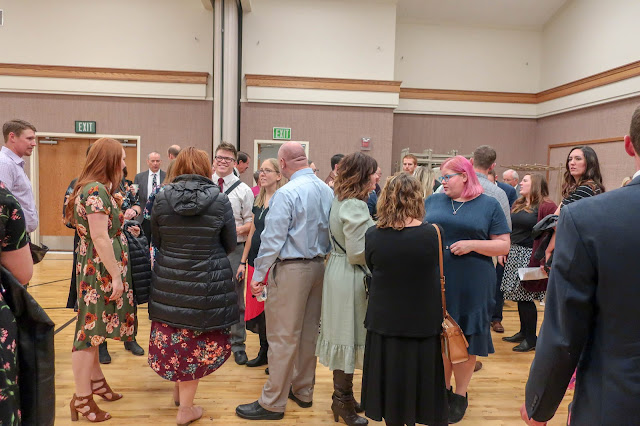 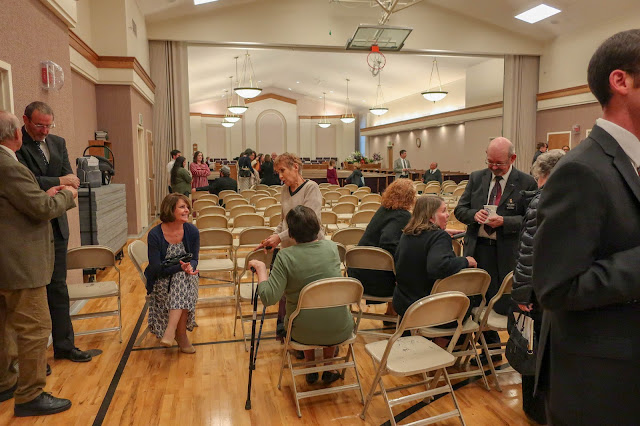 Here's Andrew, my mom, and Josie (with Richard in the background): 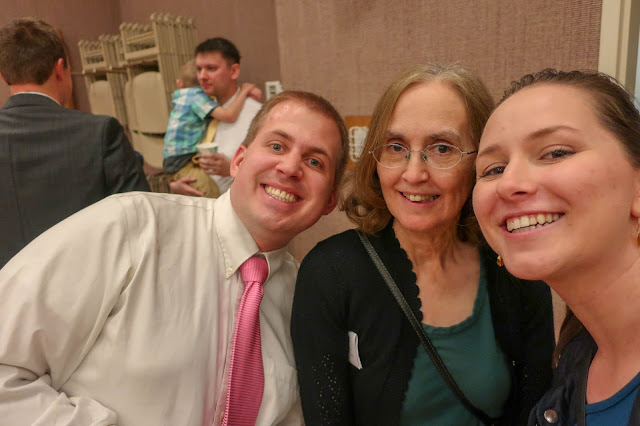 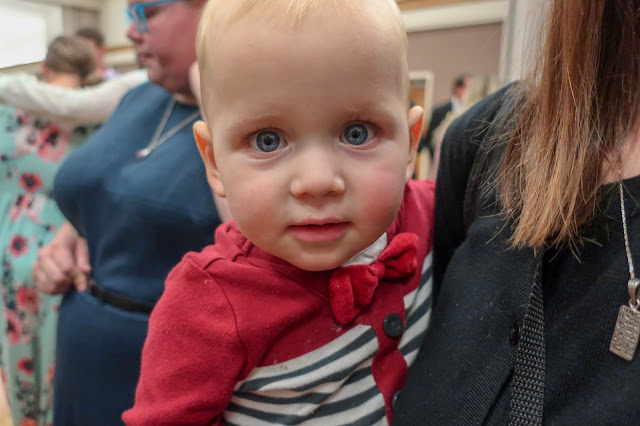 Here's Katharine and Kayl having a moment: 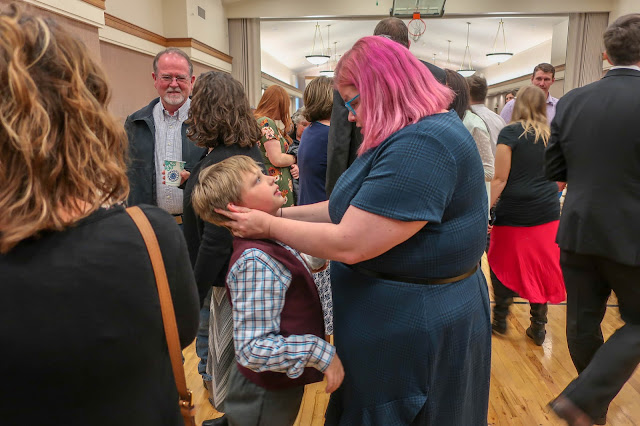 Here are some (but not all) of the BYU kids who came to the service (most, if not all, of them sang in a special number for her); Grandpa is in the white shirt in the somewhat middle): 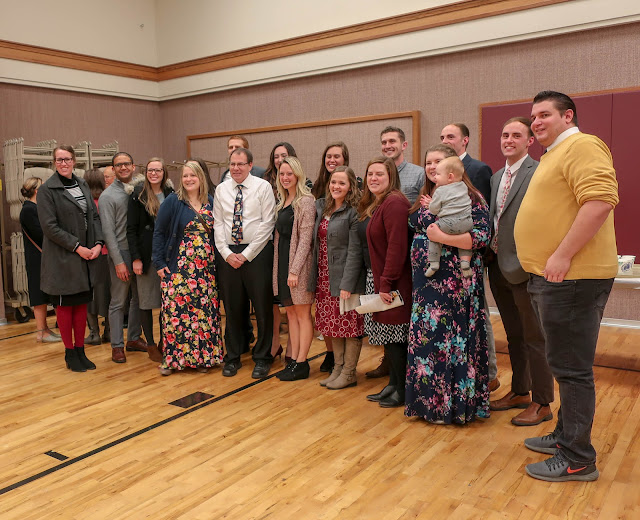 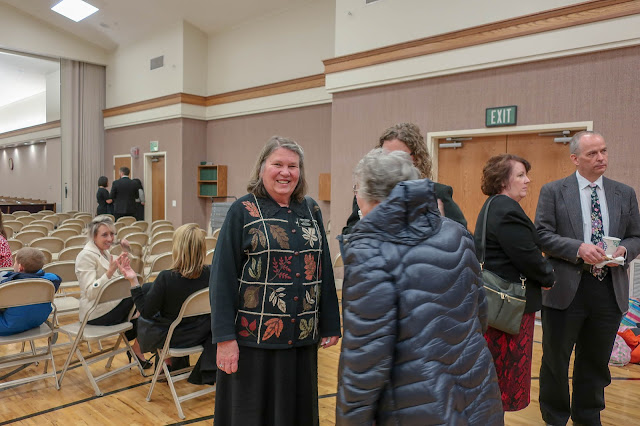 And here's James busting a move: 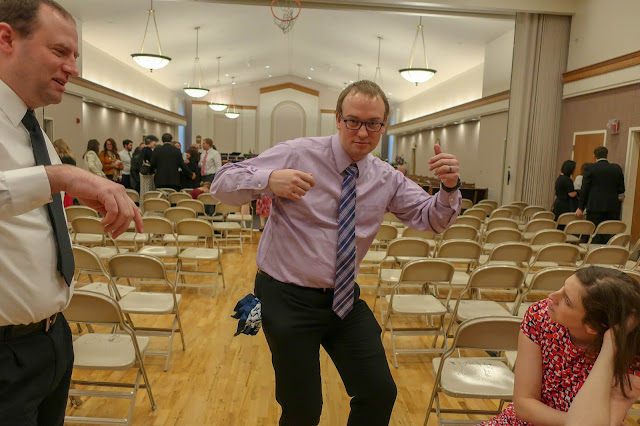 Here are some of the Heiss women:

The event wore sweet little Audrey out and she fell asleep with a cookie in her hand, which was adorable:


After the Cookie Kegger we ran back home to freshen up before heading to another church building for Karen's Mexican Fiesta (Karen was determined that this should be a happy day; there would be no tears, only fun). The Heiss clan took off before the fiesta, so although I didn't get a picture of Grandpa with his siblings and parents (which felt like it would have been an important thing to do) I'm glad that I took the time to snap this picture of Aunt Nicki with Opa's radio (and her girls, Emma and Leah):


After Opa passed away, Grandpa Frank let his kids go through the house to pick out things they'd like to have. After they'd had their fill, Karen discovered this radio in the garage, asked if she could have it, and her request was granted...and it sat in a place of honour in her home for the next 18 years.

When Aunt Nicki saw it, however, she immediately fell in love. Aunt Nicki has a penchant for collecting antiques. "Hey, now where did you get that?!" I can hear Aunt Nicki saying admiringly.

Aunt Nicki loved it so much that she joked that she was going to steal it someday; pretending to sneak it out of the house became a running gag of hers.

Reid handed it to her after the memorial service and said, "Karen would have wanted you to have this," and Nicki started crying. It was a sweet moment.

Now, here are a few pictures of the fiesta:

I offered to take group pictures of families (for example, the Anderson siblings who were present) but no one seemed particularly interested in gathering for a photo, which is something that continually blows my mind about Andrew's family. Both Karen's and Reid's sides of the family are rather adverse to having their picture taken. They moan and groan and are, on the whole, rather uncooperative about the whole thing.

There was no such thing as saying no to a picture!

But in Andrew's family there is such a thing, so I suppose I'll just have to live with the pictures I get.

It was a sad, fun, happy, exhausting day and while I wish that such a day had not been requisite, I'm glad that we at least got to share it with so many wonderful people, who all love Karen as much as we do!
Posted by Nancy at 1:43 AM