Zoë ushers in our "birthday season" since her birthday is the first birthday we celebrate in a calendar year. This has been a very difficult concept for her to wrap her head around. A lot of things are difficult concepts for her to wrap her head around, but that's alright because she's only five. For example ,she's happy to now be Daddy's age. He's 35, she's 5. Same age! And she's happy that soon Mommy will be joining her in being 5 (because I turn 35 next month).

At least she's figured out that much.

Anyway, today is Zoë's birthday and she's five now, which is an absurdly large number for her to be. We all can't get over how absolutely tiny she is, when we consider how grown up five felt when Rachel and Miriam were turning five. Now that they are great big girls, five doesn't feel so grown up. I'm happy to have her be small for a while longer.

We opened her presents this morning (right around the time she was born) so that she could spend her birthday enjoying them. She has been so terribly excited for her birthday (and so very aware of the calendar, which is odd considering we're in the middle of this weird stay-at-home phase of the quarantine where time has absolutely no meaning anymore, except that Zoë has been keeping a very accurate countdown to her birthday) that we decided to not celebrate Benjamin and Zoë's birthday together. It still sounds like far too much cake for such a short period of time, but I guess that's alright (also Rachel has taken a sudden interest in cake decorating and begged to take the lead on Zoë's cake).

Anyway, before we opened presents I explained our new tradition, which will be to write reason we love our birthday person on paper balloons and stick them to our "birthday tree." So I cut out balloons and everyone took a few minutes to think about why they love Zoë and then we read them out loud and stuck them to the tree. And then we opened presents, which Zoë has be not-so-patiently waiting for all morning.

Here she is beside her pile of presents: 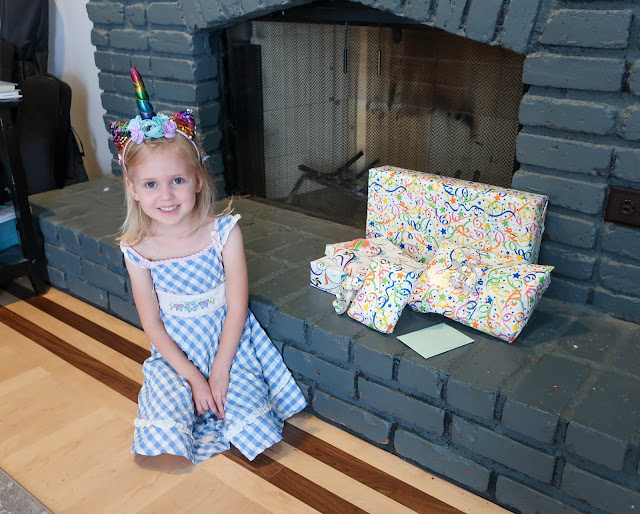 Here is her gift from her grandparents, who all (Naanii & Bumpa, as well as Grandpa) sent birthday money to her: 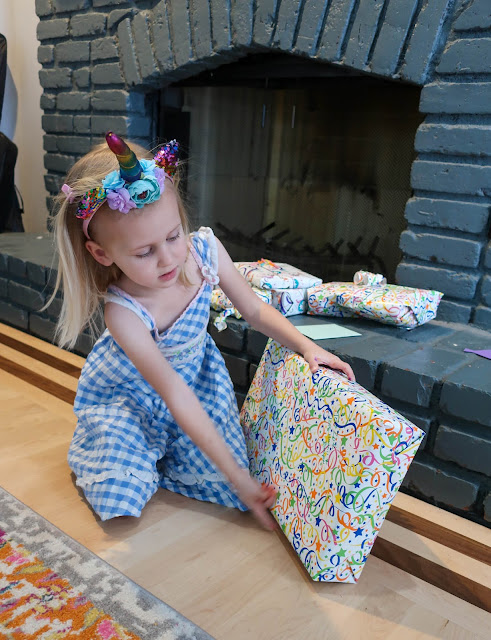 It's a bath toy, kind of like a marble run, but with suction cups so you can stick it to the wall and pour water down it and it's got spinny water wheels and all sorts of fun things. 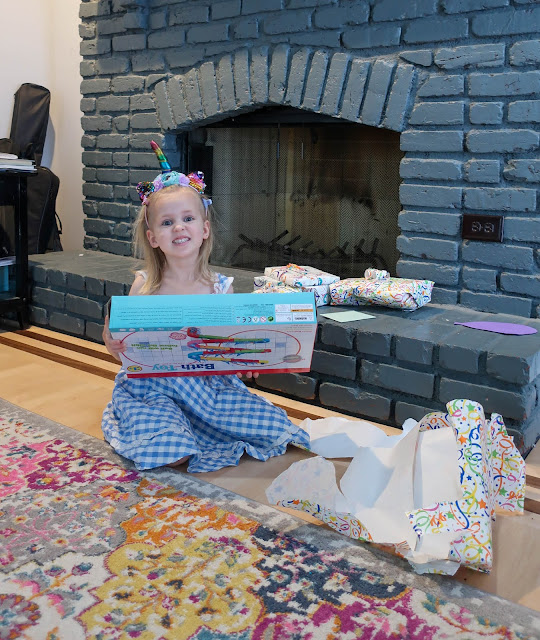 She got some new books from her family: 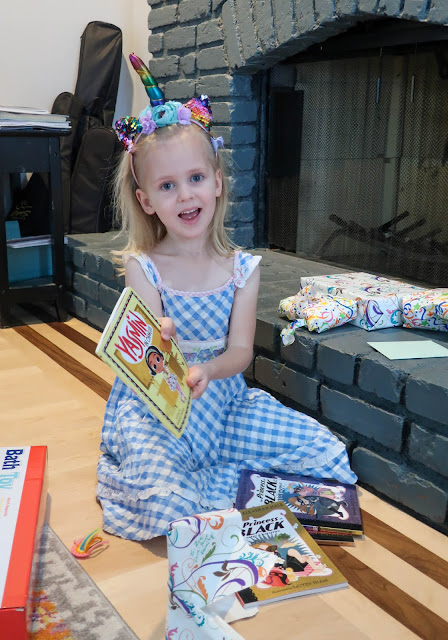 Here she is just posing for the camera (she was very into posing today): 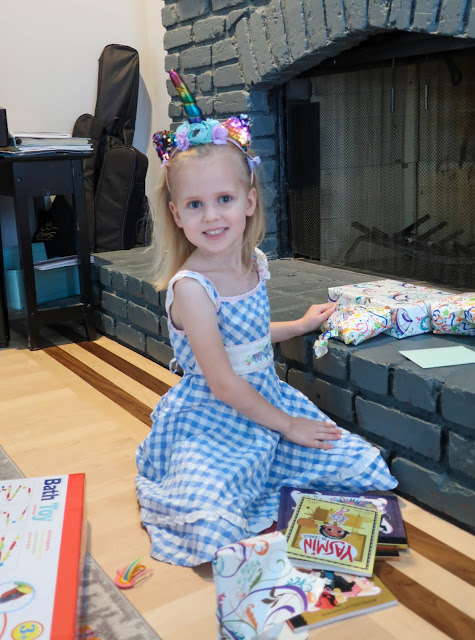 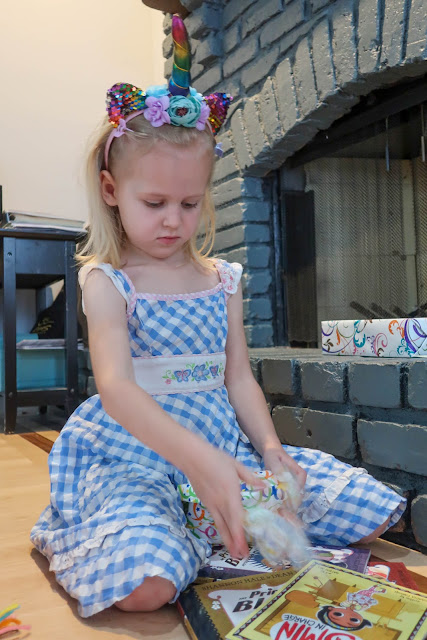 She also got a new unicorn dress, which she plans to wear tomorrow for "church day": 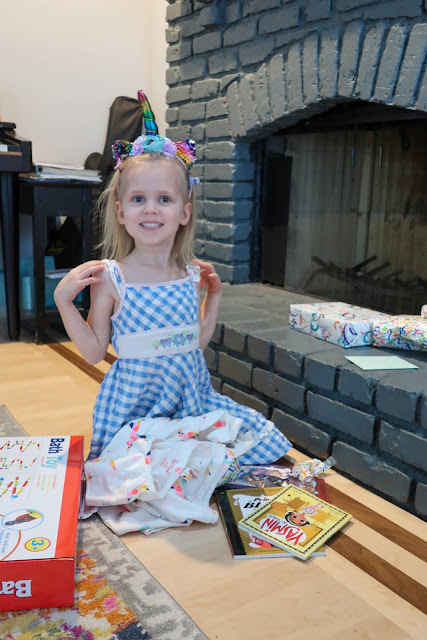 Here she is opening a present that Auntie Kelli sent for all the kids to enjoy (it's a pirate splash pad, which they're going to try out this afternoon when it's a bit hotter): 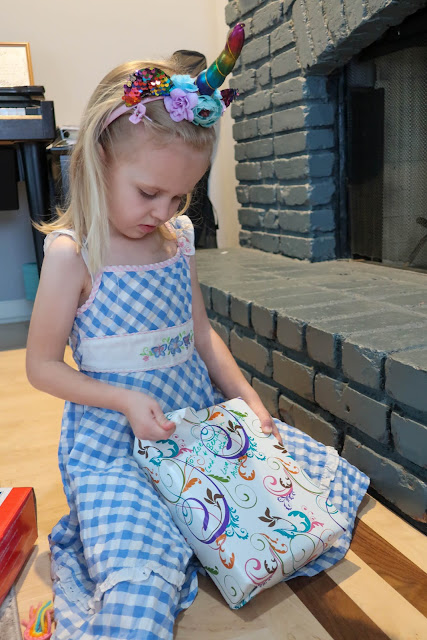 And here she is reading her birthday card from the primary: 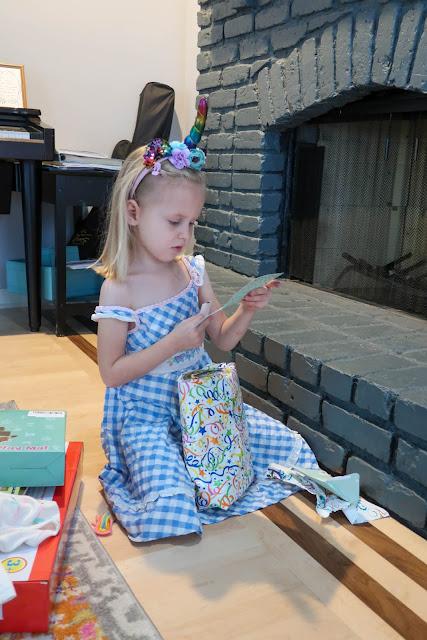 And here she is with the pink, light-up, unicorn-bedazzled rainboots Auntie Kelli sent for her (she loves them (also note that she's wearing the unicorn headband Kelli got her for her birthday last year)): 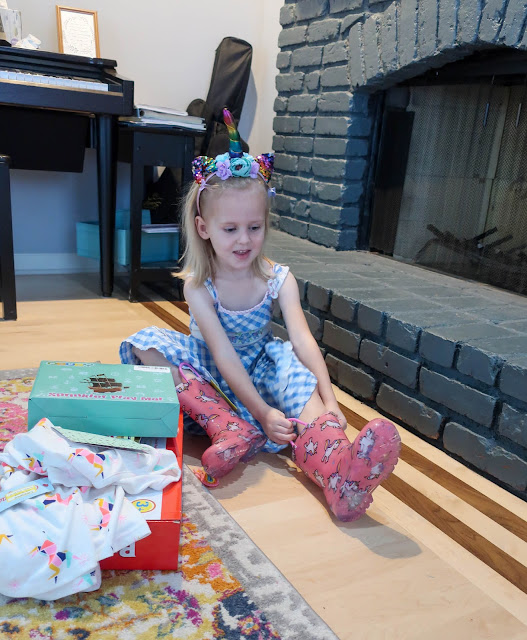 When Zoë was finished opening presents she looked around and said, "Why did you get me not-so-many presents?" I don't think she was trying to be ungrateful. I think she was just having such a fun time unwrapping things. We could have wrapped up anything and she would have been happy to open it.

"Oh, you got plenty of things!" we told her. "Let's take a closer look at all the fun, new things you have!"

So we started pulling out her gifts to give them a closer look and she quickly forgot about having not-so-many presents and go excited about what she got. 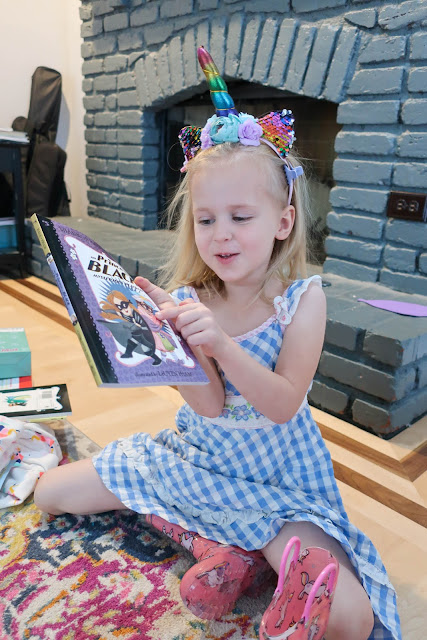 Here she is posing in front of the "birthday tree": 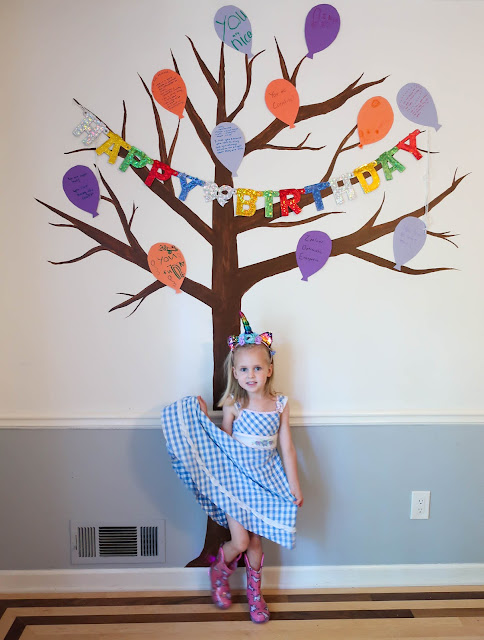 Alexander drew her some scribbles that said, "I love you!" She, herself, wrote, "Ben, I love you!" on a balloon. So I'm not quite sure those two really understood the assignment. 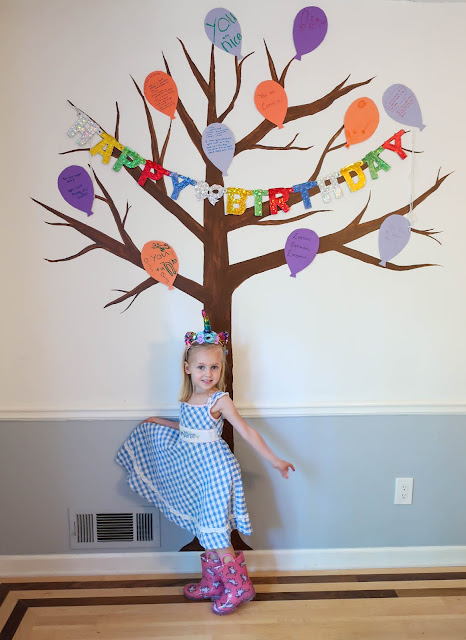 Benjamin wrote "You are funny" and "You are nice." Miriam wrote "I love Zoë because she is so good at making up songs and singing. She is also a good dancer and can read very well. Her handwriting is so good, too." And on another balloon she wrote, "You are super nice! You love being the leader." Rachel wrote that Zoë is "silly, opinionated, sweet, cute, smart, a quick learner, stubborn, five!" And she said, "I love you because you love to sing and you always check in on people when they are sad." 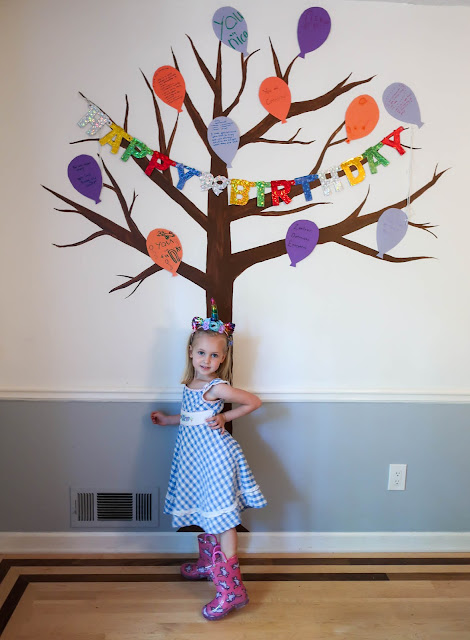 I wrote "I love Zoë because she is a good helper and unloads the dishwasher so nicely; she makes a wonderful buddy to everyone; she is brave, strong, and confident; she is fun to be around; and she is good at organizing things." We also wrote up a little acrostic poem for her as a family: Zealous, Optimistic, Energetic.

Andrew said he didn't realize we were all writing long things about Zoë. He only wrote short things and then felt a little silly when the rest of us were reading out longs lists of reasons why we love Zoë. But that's alright. There are many reasons Daddy loves Zoë that he didn't list. The reasons he listed were "You are creative!" and "You love to learn things!" 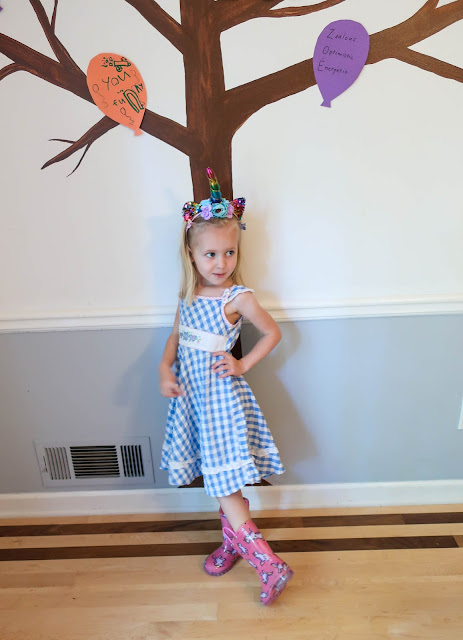 So that's a little glimpse at our sweet Zoë girl, though the reasons we love her are really limitless. She's growing up to be a pretty amazing person!

Here are a few pictures of Benjamin reading Zoë's new Princess in Black books to her. She's really capable of reading them to herself but she still loves being read to (and this way Benjamin could read them to her as an act of service and not admit that he actually really wanted to read them (he's trying to break away from "little kid" books, but still finds them attractive (because the are) so while it's neat that he's reading The Hunger Games on his own (and loving it), I also think it's great that he wants to read The Princess in Black (and also loves it)). It was sweet to watch them getting along so well: 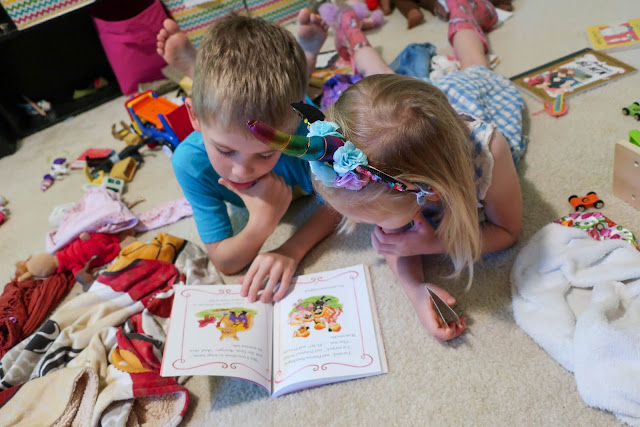 I also love that they're just lying on top of the mess they made playing this morning (because why pick anything up?): 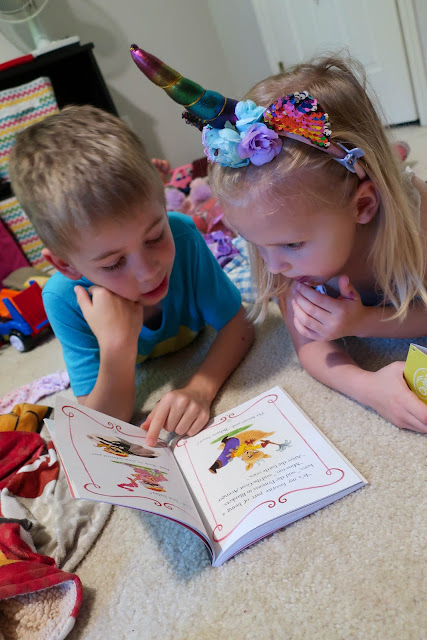