We've been working very hard at learning how to ride our bikes around here lately. Zoë's bike has training wheels—the first in the family to have them!—and she took off with gusto after very little instruction. She's so confident that she asked if she could take her training wheels off for her birthday. We'll see how that goes. 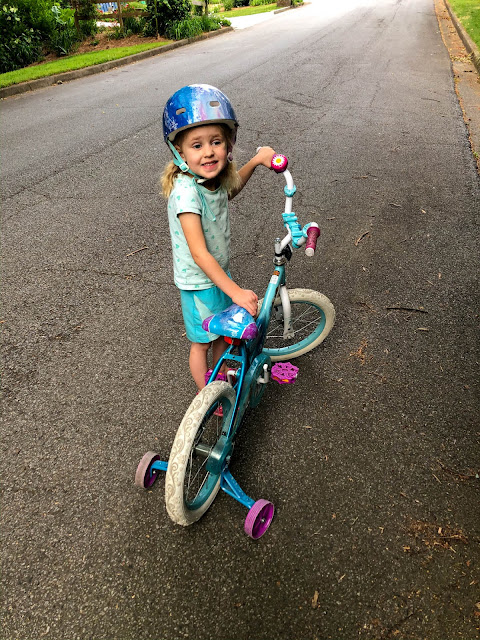 Yesterday I finally charged him with riding around the cul-de-sac five times in a row and he cried and fussed the whole way around but did it. 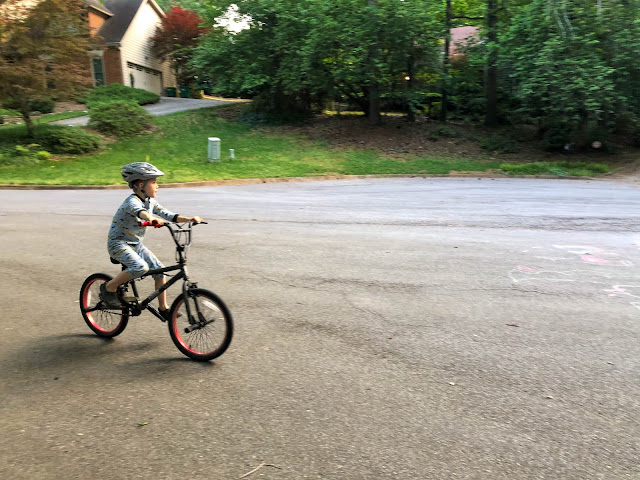 I thought he'd be rather upset with me for forcing him to keep trying but instead he said, "How could I be mad at you, Mom? You got me back on my bike, didn't you?!"

Only he said it with a ridiculous accent so it came out more like, "How could I be mad at you, Mom? Ya got meh back on muh bike, didn'tcha?!"

Zoë rode her bike around the block for our family walk but Benjamin opted to walk. Here she is pedaling alongside Daddy and Alexander: 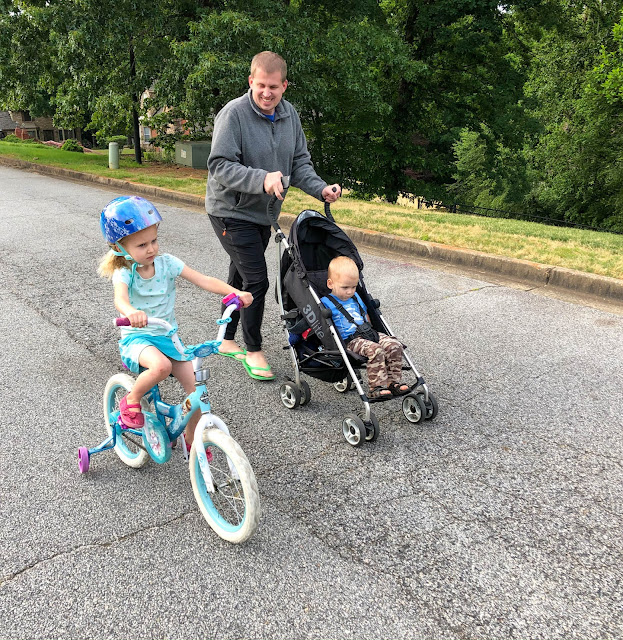 And here's a picture of Alexander crying because I wasn't coming fast enough to help him get out of the gutter (while I had my hands full helping a couple other children launch themselves off on their bicycles): 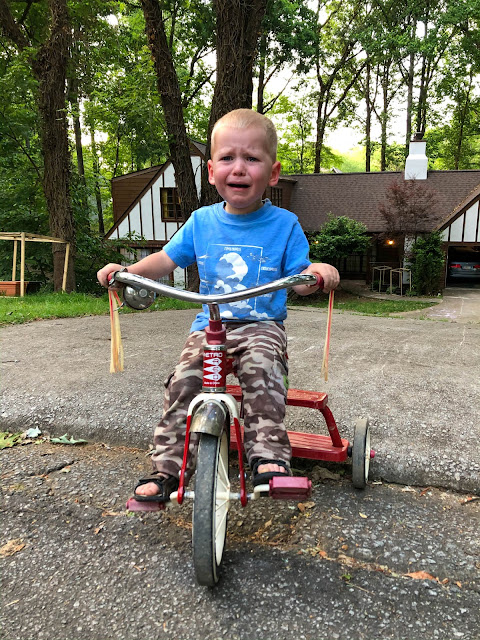 Today Benjamin requested that we pack up the bicycles and head to the park to ride along the trails. It was an exhausting outing for me, running between the kids on bikes to help them get started and to coach them on going down the hills and trying to help push Alexander in his stroller. Honestly, we hardly even saw Benjamin. He was always off and away, way far ahead of us...until he stopped for whatever reason and then he'd wait for me to get to him to help him start off again. He eventually managed to get himself started on his own, but only when he found just the right downgrade. 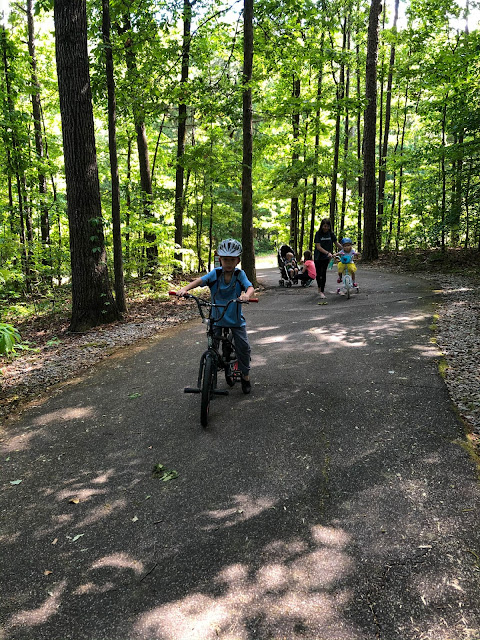 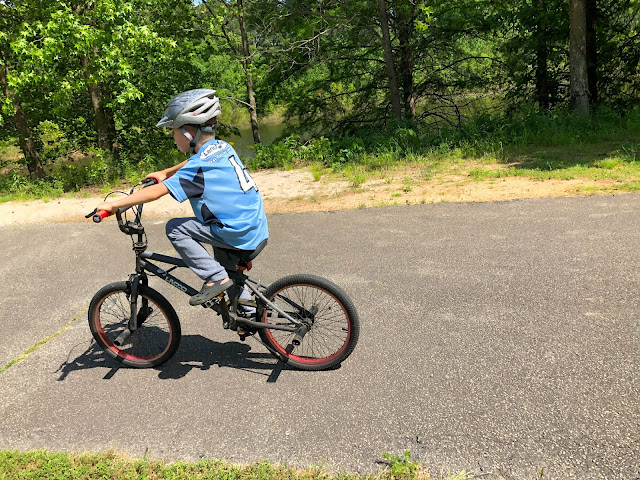 I got a few more pictures of Zoë who thought she was so cute in the new mask that Naanii sent (she sent a trio of masks to us that a friend made for her but which ended up being too small).

Here she is riding past the closed playground: 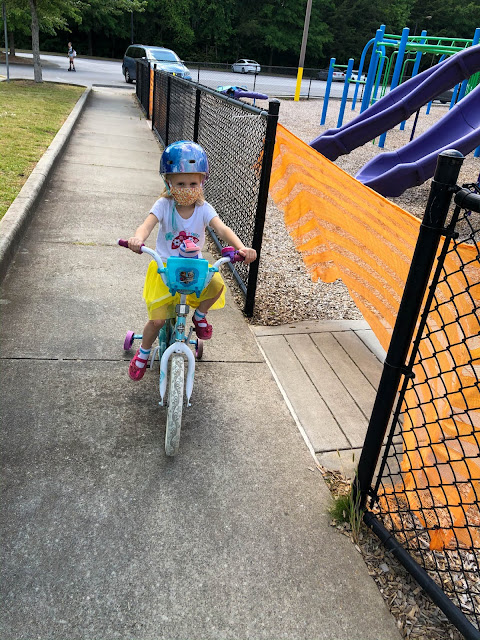 She was quite the little trouper, just pedaling along for mile after mile (I honestly have no idea how far we really went, but certainly at least more than a mile). 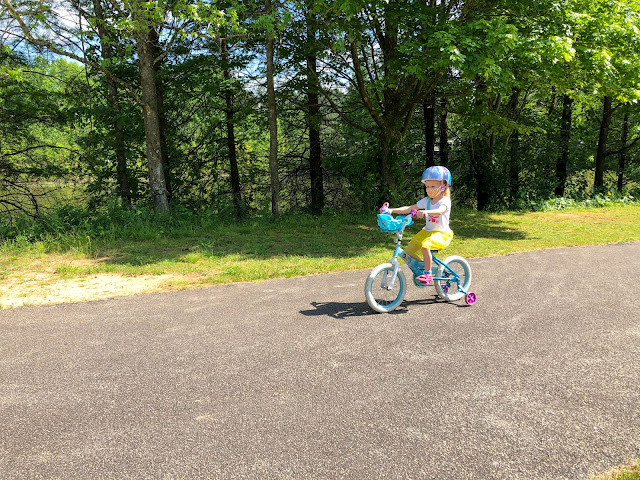 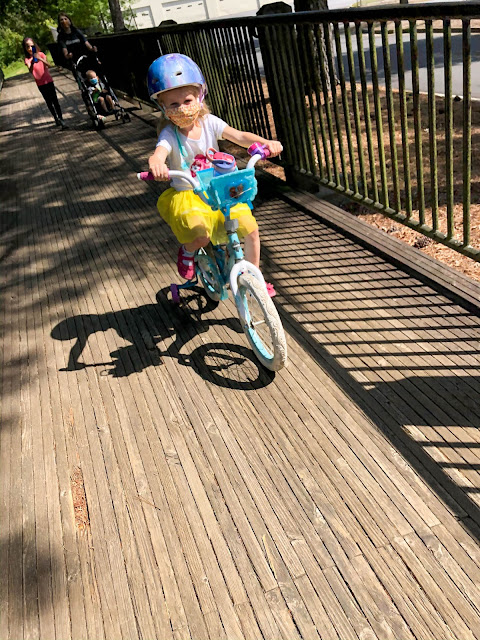 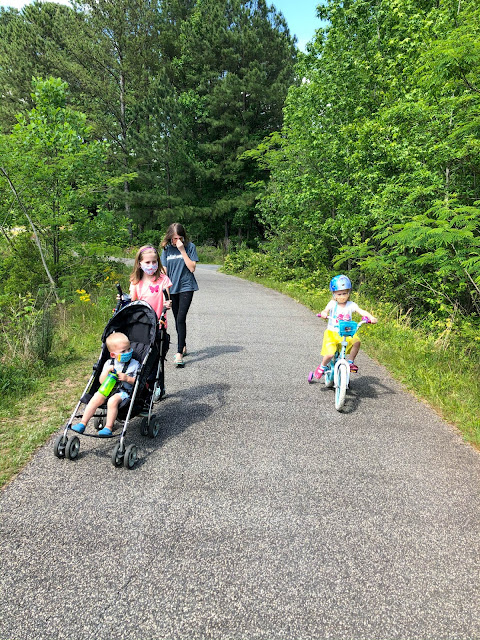 The kids were pretty good about keeping their masks on, except Benjamin would wouldn't wear one and Alexander who eventually got sick of his. 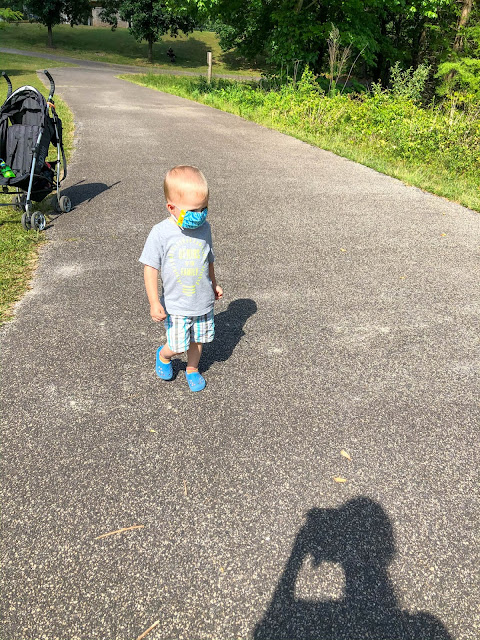 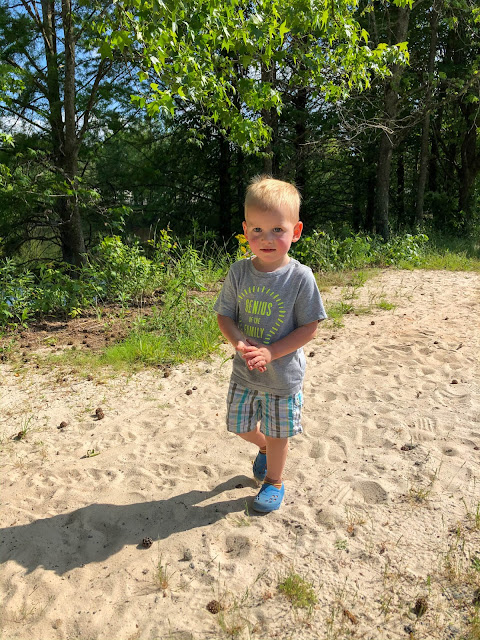 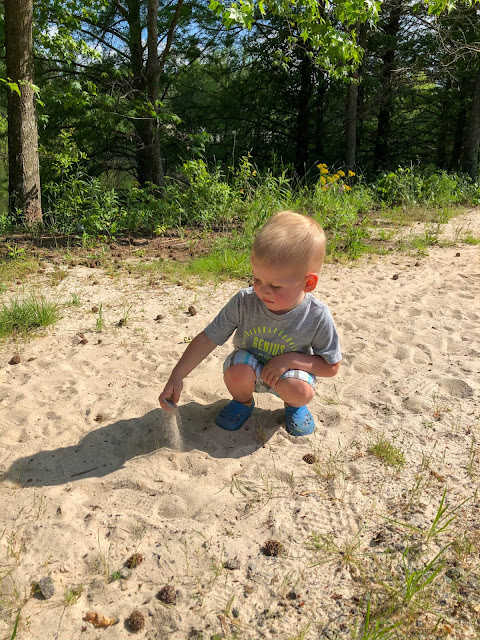 We saw a few interesting things along the trail, like this turtle (which we couldn't identify because we couldn't get a look at its face; it had been crawling across the grass and when it saw us it popped inside its shell): 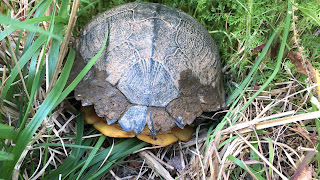 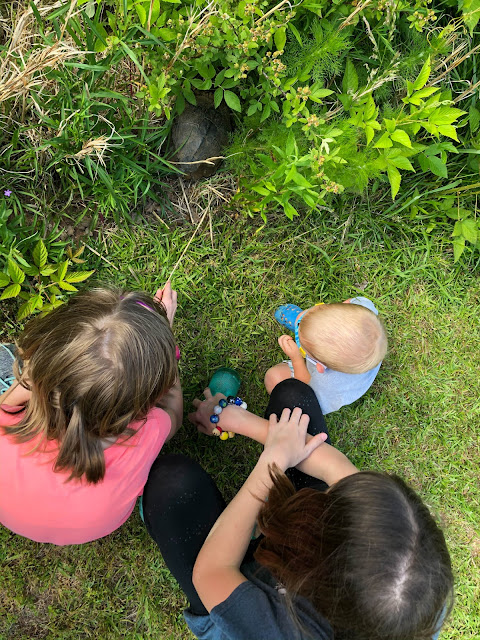 We also stumbled across a copperhead, which is basically my worst nightmare. Thankfully (?) it was dead. We stopped to examine it so we might know how to recognize such a snake in the future. 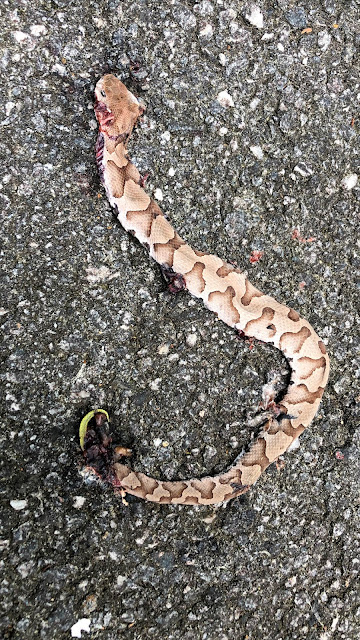 It was just a little baby snake which you could tell because of the green-tipped tail...and also because of its rather small size. 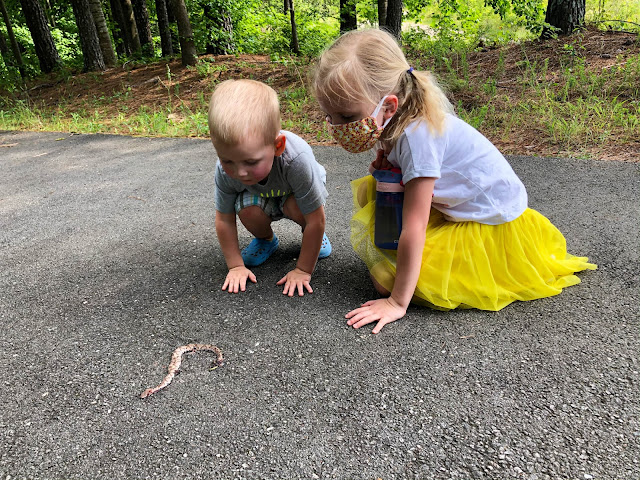 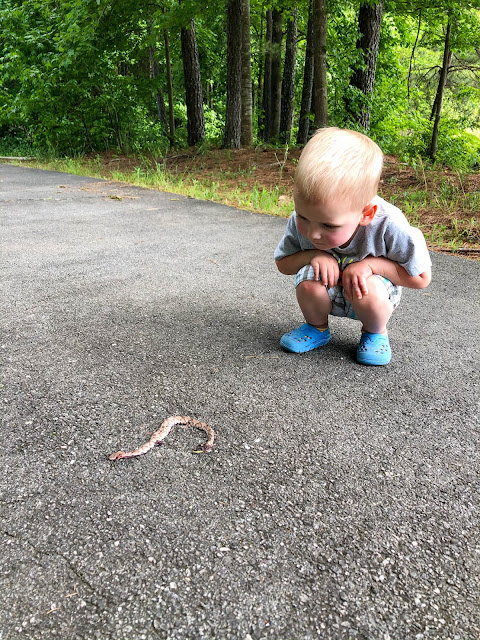 When we got home from the park Benjamin asked if he could ride his bike around the cul-de-sac on his own for a while, so I told him that he might, since he was feeling so confident about starting and stopping on his own. So I helped him get his bike to the top of the driveway (which, once again, is a doozy of a driveway) and he happily set off riding his bike in circles.

I went inside and through the house and had just opened the door to go onto the back porch (to work on some window glazing, which is apparently what I do in my free time now) when I heard Benjamin scream. So I quickly ran out to the front of the house again and found the poor boy hyperventilating. He had left his bike in the road and was clutching his throat, gasping for air but not getting much. His face was frozen with terror and his lips were a sick purple colour. He hadn't screamed since his initial blast.

"Can you tell me what happened? Can you show me where you're hurt?"

He was up and walking around and seemed just fine, aside from the fact that he couldn't catch his breath and was clutching his throat. He eventually calmed down and I got him to tell me what happened.

He'd lost his balance and fell over (which is something he's done several times; when he gets tired of riding or loses his confidence of any sort he just bails off his bike (and then it inevitably lands on him and he just can't quite understand why)) and landed somehow with his neck right on his bike handles. 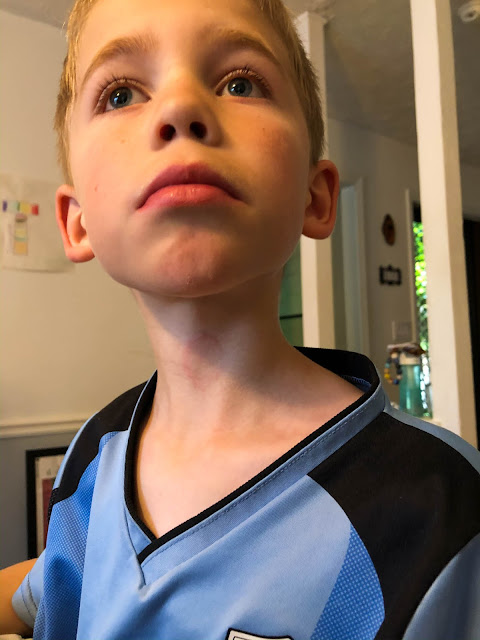 He'll make a full recovery, I'm sure. We're just happy he didn't end up impaling himself! He does find the most creative ways to crash...

To end on a happier note, enjoy some chalk creations the children have drawn lately. We've been being very responsible over here and have been letting the children stay out until dark playing in the street. They draw, they play four square, they ride their bikes and their scooters. So these are some of the pictures they've drawn by the light of the streetlamp: 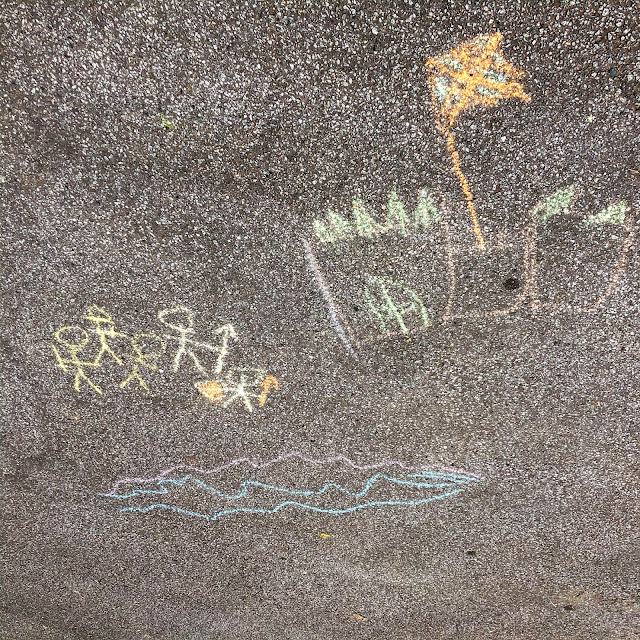 For the record, this mountain/sunset lady is ginormous (probably at least ten feet tall): 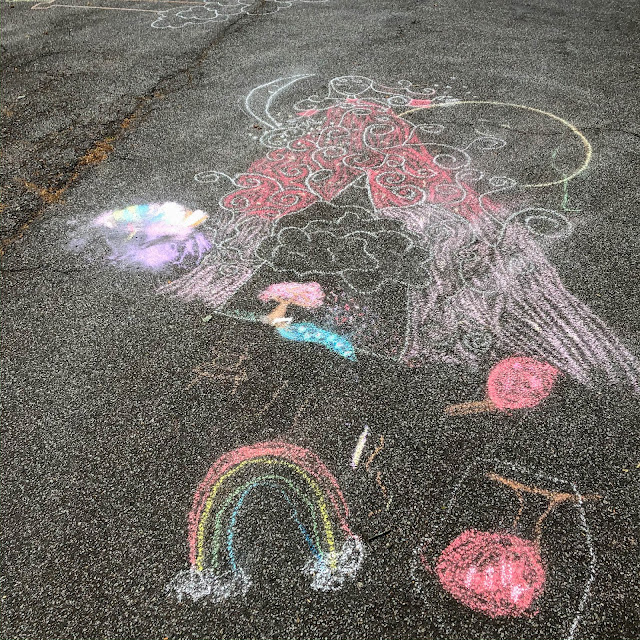 And this depiction of Jack and the beanstalk is, likewise, really, really big: