Memorial Day is always such a weird holiday for me. I don't know how to celebrate it and it always sneaks up on me. I actually have to use a mnemonic device to even remember that it/when it exists. Memorial Day is in May, see? As opposed to Labour Day, which is in September for some reason, or Veteran's Day, which is is somehow different than Memorial Day and takes the place of Remembrance Day, which is a far superior holiday (in my opinion).

America hasn't been very good at teaching me what these holidays are about. I think in theory Memorial Day is to honour soldiers who have passed away. In practice it seems to be a great big summer kick off (as a Canadian, it always felt a little early to be kicking off summer in May considering we go to school through June). There are barbecues and pool parties but not a lot of actual remembering going on (from what I can tell), so it doesn't really feel like that's what Memorial Day is for (coming from an outsider).


The New York Times posted a rather moving front page today, featuring the names of 1000 people who've died of COVID-19, which is about 1% of our total deaths (this rendering of the front page is...amazing). People are up in arms because there was a mistake in the proof they put up last night, but they fixed that before they published it (and, I imagine, did a pretty careful reading of the rest of the names), but as a writer and editor I know that mistakes happen (and then are missed and published) all the time. I was so happy to finally see some sort of effort toward a collective mourning. Our country should be devastated but somehow...we're not...and that's very strange for me to wrap my head around.

It will be interesting to see how things play out here, as we pretend nothing is happening. I understand that people are excited to see things opening up again and that everyone is suffering from some quarantine fatigue, but the reports coming out of Missouri this weekend is unsettling. We honestly have flattened the curve, which I suppose was the stated goal...but I don't feel like we've flattened the curve enough...which is, I guess, a matter of opinion. Honestly, we've flattened the curve into a lovely plateau, which means we're just steadily dying over here.

I'm not sure what Spain did differently, but they were kind of spiking with us back in March and now they're somehow very much under control while we have kind of somewhat managed to put a lid on things.

See how Spain has a lovely and steep downhill trend here? 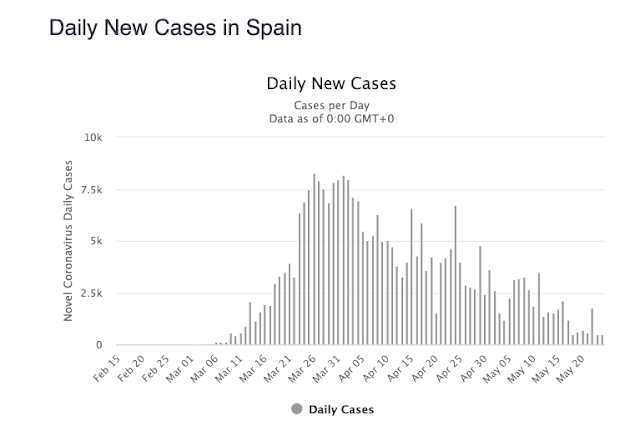 And see how the United States (this is the United States; I just didn't grab the title with my screen capture) has a very gradual downgrade going on? (Canada has similarly seemed to have plateaued (though not at 20,000 new cases per day, but at 1,000)). 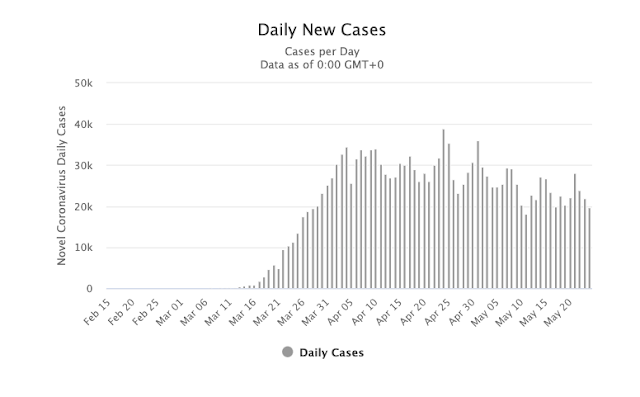 Anyway, just for my reference, today Missouri has 12,268 cases (and 690 deaths). It will be interesting to see how the numbers will look in a few weeks. Perhaps they'll stay low; perhaps they'll skyrocket. Time will tell.

I don't think there is an easy way through this situation and I can't claim to know the right way forward, but I worry that this isn't it. We've had 100,000 deaths in approximately two months—and that is with somewhat stringent measures in place! I'm not sure that calls for a loosening of restrictions, so I'm glad that we have the option (and the means) to stay home a while longer.
Posted by Nancy at 12:45 AM