The other day Alexander knocked over a tower that Benjamin had built (and had been saving to show to Andrew). I had already looked at it (and it was a pretty neat tower), but Andrew hadn't gotten there yet. So Alexander had to sit on the steps while we chatted about why we don't knock over other people's towers (answer: because it makes them feel so sad). 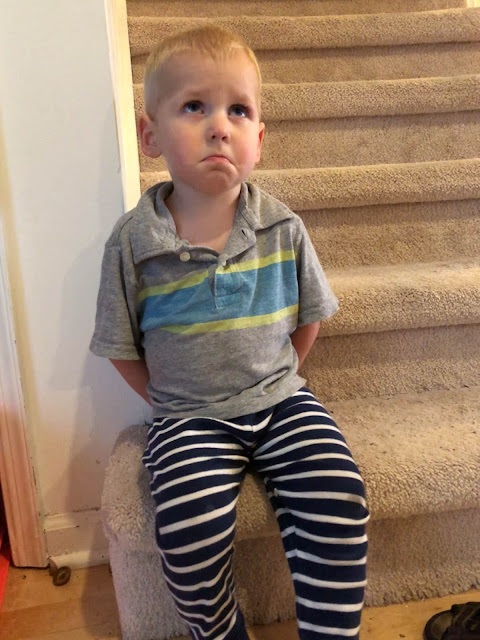 Alexander, who is a little chatterbox these days, explained that he had knocked Benjamin's tower over to rescue the people (chess pieces) that were trapped inside. Further, trapping people inside of towers is not nice so Benjamin had built a mean tower and that's a bad example.

He babbled on and on about it for quite some time and we still don't quite understand everything he says. But there were definitely people trapped inside that tower and Benjamin was definitely accused of being a bad example (due to trapping people in towers).

Unfortunately for Alexander, it's still not very nice to knock over other people's towers (even if there are non-animate hostages held within) so he had to apologize to Benjamin and give him a big hug.


Benjamin was in the middle of doing the dishes during the hugging and he's really a pretty flexible kid and completely got why Alexander would smash his tower. Benjamin really understands those kinds of urges (and he's typically a very sweet big brother). 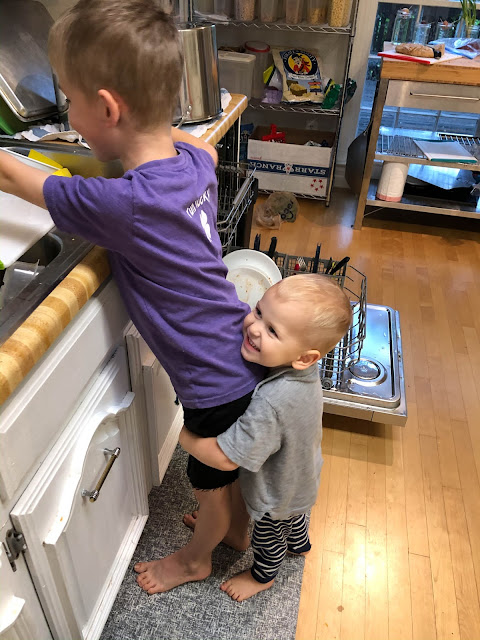 All of this is to say that I beat Andrew in chess the other day.

We've been having a lot of rain this week so we've been spending far more time inside than outside so we've done a bit of game playing. We played Quiddler as a family (and I won) and then I played Scrabble with Rachel (and I won) and I think we played another game as well (though I can't remember what I was, I know that I won that game, too). It isn't even as if I had been trying to win! I was even helping the kids think of some pretty spectacular words when they got stumped and was being a good sport. It just worked out that way, okay?

It's not like I was even gloating about winning, but then Andrew says, "I challenge you to a game of chess."

"Chess?" I moaned. "That game stresses me out! There are too many choices to make and I can't think so many moves ahead and...I'm just not very good at it."

"Exactly," he said. "You need to lose at something."

Please. I lose at lots of things. All the time. Chess is just seriously too many choices for me. With Scrabble I have only a few tiles that can be arranged in a very small number of sequences; "there are 318,979,564,000 possible ways to play the first four moves of chess." Even making that first move stresses me out.

Making decisions is not my forte.

Talk to me about deciding on my course schedule for the fall.

"I want to play chess, too!" Alexander chirped.

So we played chess. And—amazingly enough—I smashed Andrew. Like, I just beat him so bad!

When Alexander realized that he had sided with the losing team, he threw on those big, watery puppy dog eyes and whipped out his melodramatic frown, and just sat there whimpering for a few seconds before crawling over to Daddy and burying his little face in Daddy's lap.

It was so cutely pathetic.

While we have that picture of those two boys up there for reference, though, how about I tell you about the time not too long ago (May 4th, it was) when Benjamin came up to me wearing this outfit (our quarantine dress code is kind of, like, whatever): 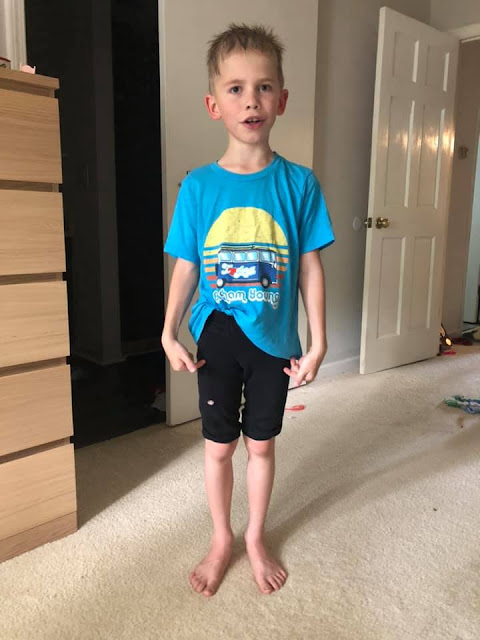 "What are you wearing?" I asked Benjamin.

"Yes! Look! They even have a hole in the knee...but it's in the middle of your thigh."

"That may very well be, but rest assured they are 100% Alexander's pants."

"Come to think of it," Benjamin said, finally coming round to my way of thinking (I win everything eventually), "They are a little tight around the knees."

"That's because those are tiny cuffs meant for baby ankles, not big-boy knees!" I said.

Benjamin is about six years older than Alexander and, at this point in their lives, that means he's significantly larger than Alexander (8 years old versus 2.5 years old), so it was hilarious to see him wearing Alexander's pants. Rachel has pulled the "but they were in my drawer!" card before as well, but she's only two years older than Miriam and they've always been in similar clothes (though not so much in recent history). Rachel once wore a pair of Miriam's pants to school and wondered the entire day why they were so tight on her (but she was 6 and Miriam was 4 and the pants had only recently been passed down from Rachel to Miriam so the confusion was justified).

I don't know how Alexander's pants wound up in Benjamin's drawer but it should have been pretty obvious as he was putting them on that the pants weren't his!

Then again, I only recently realized that Alexander is wearing size 2/3T underwear while the bulk of Benjamin's are 4T. They're really quite hard to tell them apart in the wash.

So guess who'll be getting new underwear for their birthday!
Posted by Nancy at 1:28 AM