With current social distancing measures—limiting the number of people in stores and so forth—shopping seems to take forever. Plus Andrew had to go to the hardware store because while the kids were playing Lego in the basement (I will get around to highlighting their Lego creations, Mom) they noticed a pinhole leak had sprung in one of our pipes. Luckily it was in an exposed area (which probably helped us discover and fix it a lot easier than it otherwise would have been).

Here are a few pictures of the children playing in the windows while I worked. Alexander is saying, "I can stick my hand right through the window!" 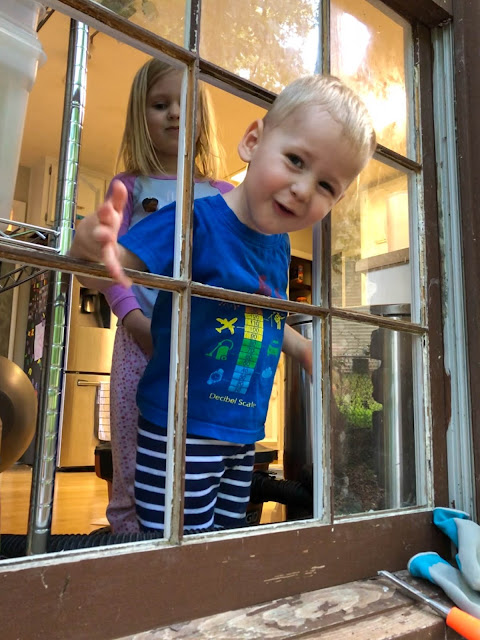 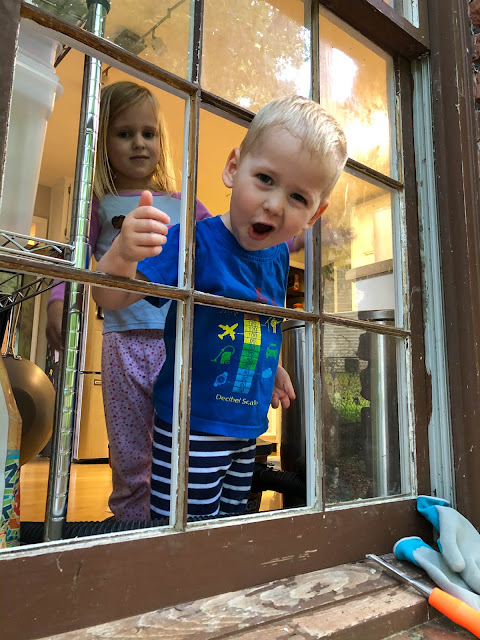 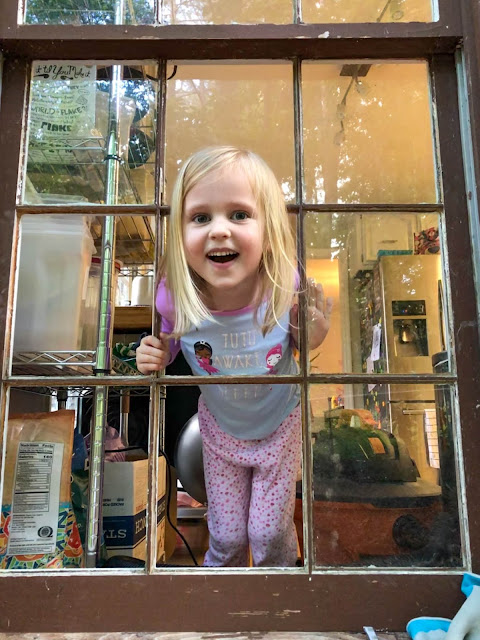 And here they are sticking their heads out of the window together: 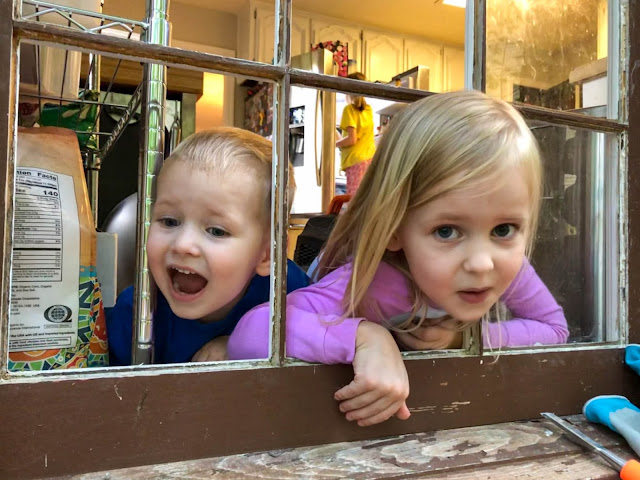 One day I need to remember to take a before picture of these windows. I forgot to with this one (again) but it was just in such bad shape. The centre pane, for example, had virtually no glazing left around it and was tacked in place with four rusty nails. It was just flapping around in its supports, letting all sorts of breezes and water and bugs into the house. I honestly don't know how we didn't notice it before we did. One of the panes in the bathroom upstairs had completely twisted in its mutins/mullions and was, like, perpendicular. I had to reach through the window and push it into place and very awkwardly caulk it into place one winter evening (before I'd really done much research on how windows work and how to fix them). This pane was about as bad as that, except that it had the nails in place to keep it from twisting out of the frame altogether.

The windows in the front of the house are really in pretty good shape. I think they had those redone before they tried selling the house, though, because all the glazing looks fairly fresh and the windows have obviously been painted recently. And they said they painted all the windows/frames in their little blurb but...I don't think they paid much attention to the windows on the back and sides of the house (probably knowing full-well that we'd overlook them).

But whatever. They're our windows now. Oh, boy.

I'm actually about halfway through the project. About.

I've finished glazing six windows. I have six more that desperately need to be done (and then four more that are under the covered section of our roof so although they're letting air leak in/out of the house they aren't letting water leak in/out of the house so are less of a priority). I might just finish this project this summer! We're so confident that the glazing is crusting up well enough that Andrew looked for paint today. He took in some glazing remnants to see if they could match the paint colour using that as a sample but as it turns out they need a much larger sample for that.

"So instead I just got every brown," Andrew said.

"Uhhhh..." I said, imagining him carting home 30 cans of brown paint all in different shades.

"Swatch!" he added. "Every brown swatch!"

That is obviously the most logical thing to do—bring home swatches rather than cans of paint.

Anyway, here's Andrew working on our pipes (yikes). I called the plumber and he quoted me about $200 to do this job, but after a little research I figured that (a) do it on our own for about $30 (and only because we had to buy some tools; the next fix should only cost us about $15) and (b) the plumber would probably recommend replacing quite a bit of the pipe since this is an older house and the flux they used 30–40 years ago wasn't water soluble, which is part of the reason copper pipes are prone to pinhole leaks (the flux is acidic so if any gets left in or on the pipe it will eventually corrode it). Nowadays we have water-soluble flux so once the pipes have been sweated (which, I learned, is just soldering) any residual flux gets washed away. Anyway, the plumber would probably recommend replacing quite a bit of pipe—and he probably wouldn't be wrong about that—but we aren't ready to commit to a huge plumbing party right now. So we did it ourselves.

We went with a SharkBite slip coupling, which I really hope holds up. 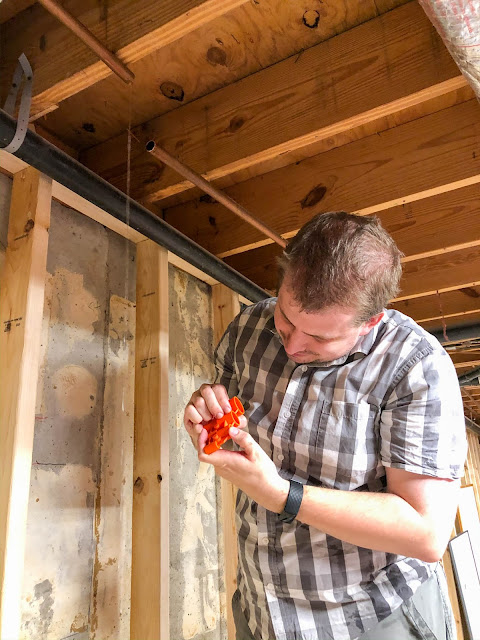 If not, our kids are in the basement playing Lego pretty much all the time so they'll notice if things start dripping.

When I told the plumber that we were thinking of doing it on our own he said to call him if we ran into trouble because they offer free advice over the phone. That was really reassuring (we've used this plumbing company several times already this year (Mom, it's the same company that was here working on the pipes while you visited us 5 years ago...I mean...in March) so I trust them). But then Andrew was like, "Let's fix it after all the kids are in bed so that we don't have to worry about anyone using the water," and then I started worrying because it's one thing to call the plumber at 3:00 in the afternoon to say, "Yeah, so about that leak I said we were going to try to fix on our own..." and it's a completely different thing to call them at 11:00 at night with the same problem.

But, all things considered, everything went smoothly. We turned the water back on. Nothing's leaking. So, here's hoping...
Posted by Nancy at 1:04 AM