Part of what made me fall in love with this house was all the windows. The windows, however, were also what made me nervous about buying this house. We'd love to replace them all but when I say "all these windows" I mean something like forty windows. We basically live in a greenhouse! Though I have yet to acquire any houseplants, the humans inside are thriving...and our avocado finally put out a taproot so, I mean, that almost counts as a houseplant!

The windows are also original to the house, "construction-grade" windows. Single-paned. Painted shut. In need of repair.

And we've managed to put it off for quite a while but we recently learned that the windows along the back deck aren't quite watertight these days, so something needed to be done. So I've been "recently learning" a lot of things, like what, exactly, window glazing is. And, it turns out, it's not what I thought it was (because I thought it was, like, coating the glass with something, but it's not—it's how the glass is fitted inside the frame). I've also learned about window rabbets and stools and sashes and mutins and so forth. Who knew the anatomy of a window is so complex?!

For now we've decided to simply reglaze the windows in most desperate need of repair. First we had to remove the old glazing compound around each piece of glass, which was rather easy considering how badly it's chipping away. We then learned that our glass had only been glued inside our windows (which explains why the panes rattle whenever the air comes on (not that it's been on for the past several weeks)—they're all loose because the glue is so old it's lost its stick-it-together-ness). So we put some glazing compound in the frame, pushed the glass back in, and fastened it into place with glazing points, which makes for a much snugger fit. Then we replaced the glazing and once that forms a "crust" we'll paint it (I suppose we primed the windows somewhere in there today as well).

It's quite the process. I managed to get three little panes done today (with minimal help from Andrew, who was working on other things (and running to the hardware store for me)). I have no pictures of the process, but here is the nearly-finished product: 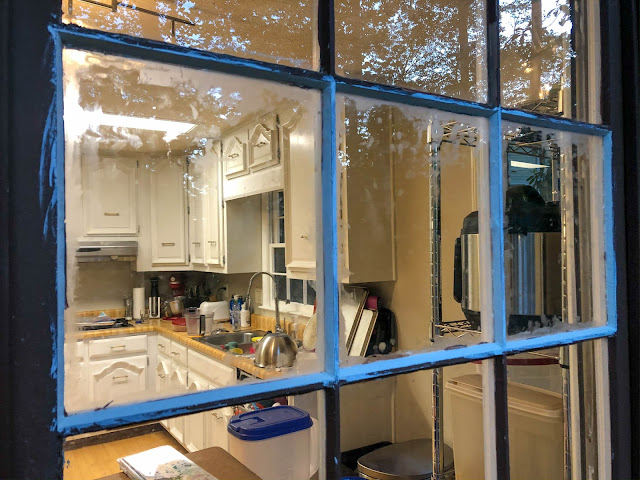 I figure that if the whole grad school thing doesn't work out, I'll be a skilled window glazier by the time I get all our windows fixed...so there's always that route.


All of the above can be considered a long preamble to excuse my outfit in the following photographs (flamboyant leggings and a decade-old racing shirt); they're my painting clothes.

I honestly can't remember why Andrew was walking across the deck (probably he was checking out some of our other windows) but he suddenly let our a yelp. "That's a frog!" he said. "I almost stepped on it!" 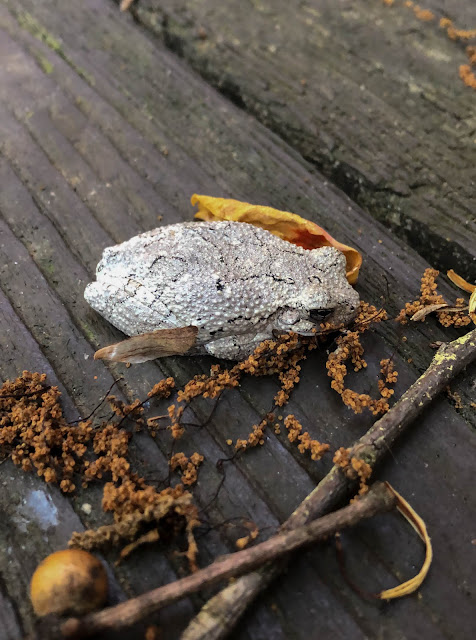 So I quickly went and got the kids (it's a little silly that we sent them inside to play when today was such a beautiful day, but the littlest ones would not stay out of my hair (and this isn't really a project I felt like I wanted to involve a billion little hands in (they do a lot of helping elsewhere))) so that they could meet our little visitor, a Cope's grey tree frog.

I remember having one of these get inside our house in Durham once (yes—see here (and be reminded of a sweet little two-year-old boy who wouldn't sleep without his Mommy (not that I need to be reminded of such a thing because that's totally the story of my life (also, Zoë was still up just a half hour ago and I just...argh))))!

Some of the kids were brave enough to touch it: 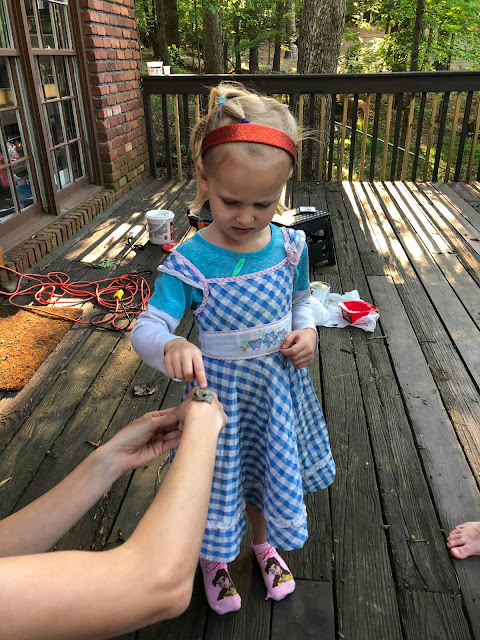 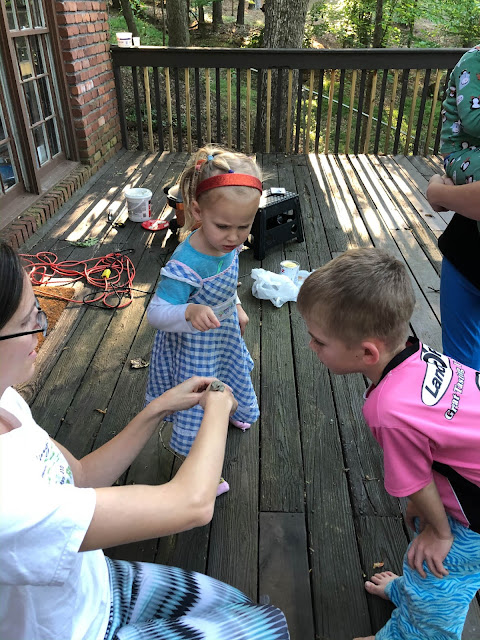 Some of the kids were brave enough to hold it: 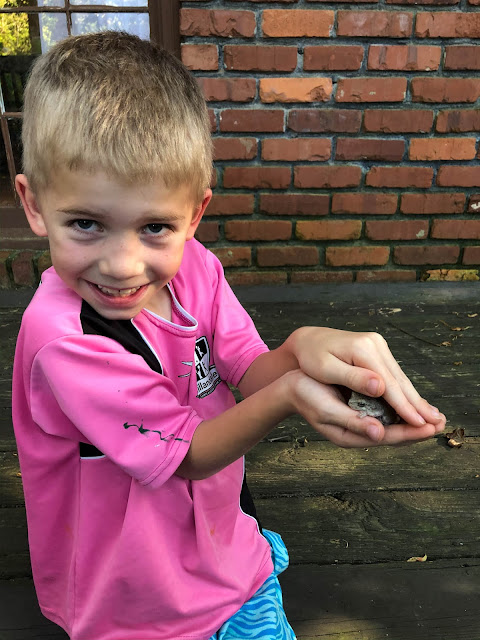 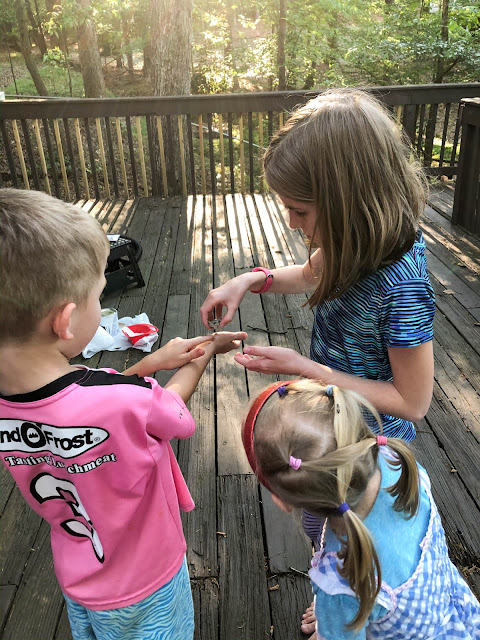 Alexander didn't like it very much. He tried touching it but got scared because, he said, "It's got poop on it!" 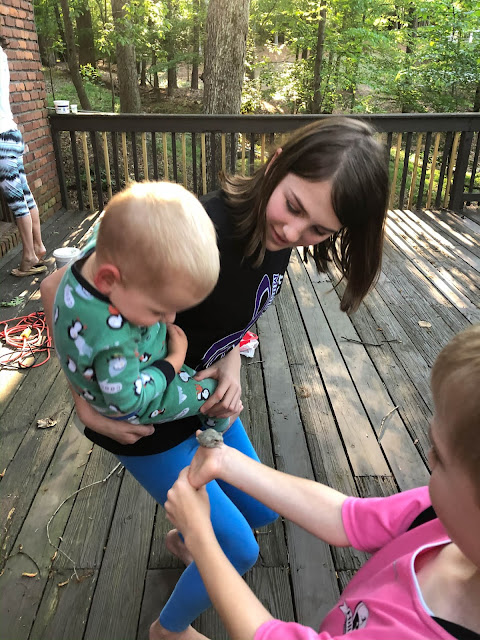 Alexander's probably feeling a little sensitive about poop on skin because he had a little accident this afternoon. At this point in history all the kids were playing outside and I was inside fetching something (a tool of some sort) when I heard Alexander start screaming and crying. I rushed back outside and found him running around the back deck, having a glorious temper tantrum, absolutely naked and tracking poop everywhere. He'd needed to go potty but he couldn't open the door to get inside and the rest of the kids didn't understand what he was saying so they just kept jumping on the trampoline. So he took off his clothes and got poop on his legs and it fell on the deck and then he stepped on it and...he wound up covered in poop in a very short amount of time. It was very traumatic.

I took him inside to wash him off and sat him on the potty for a minute to see if he had anything else to do and he apparently had his heart set on bathing because he wailed, "Mom! I don't need to go potty! I need to take a bath!"

So Rachel gave him a bath while I kept working on the windows. In fact, that might be when we made the switch from having the kids be outside to having them be inside. Anyway, Alexander wasn't about to be interested in anything even slightly resembling poop. 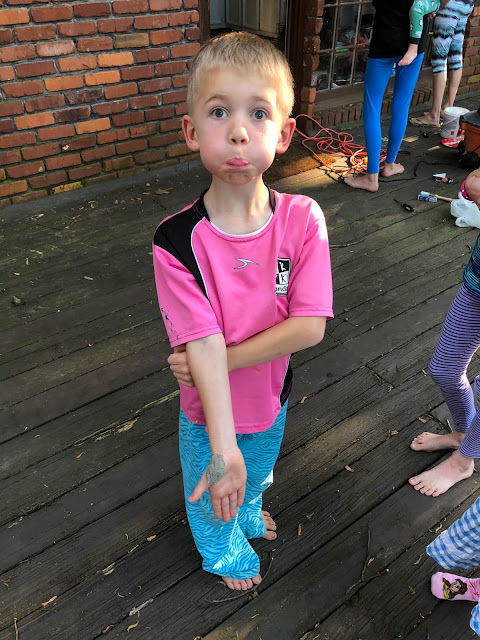 Benjamin handled the frog quite a bit, though, and it's a good thing Daddy is so afraid of frogs because every time someone new reached out to touch the frog Andrew would say, "Wash your hands! Thirty seconds! With soap!" He was like a broken record.

As it turns out, the "skin secretions from this species may be irritating or toxic to mouth, eyes, other mucus membranes." Always good to have your better half reminding your children to wash their hands when you're calling them around to stroke a toxic creature/substance.

Here I am after this frog leaped from my wrist into my armpit! That was quite the surprise! 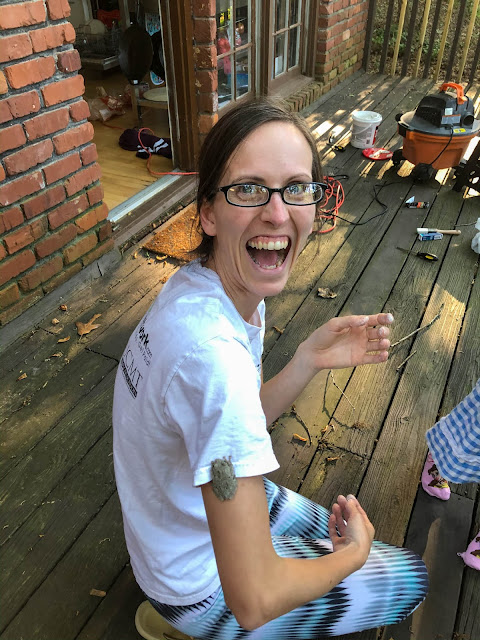 He quickly climbed out and made his way up my arm and to my back, showing off his beautiful orange hind legs (I have no idea if this frog is male or female, for the record, but in my mind it's apparently a he): 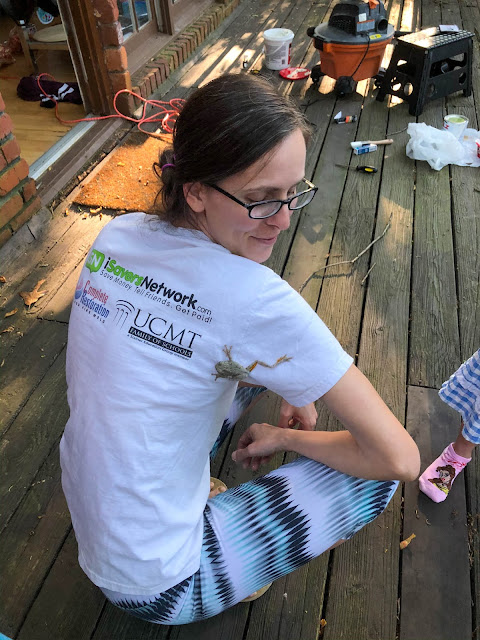 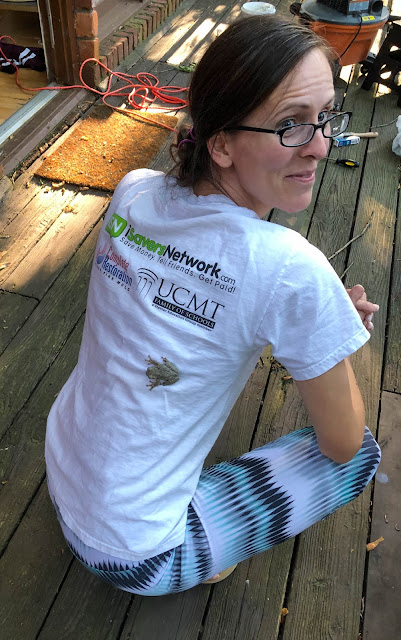 I listened to the call of Cope's grey tree frog and from the sounds of it (it being every evening) we have several of these little guys hiding out behind our house. We can hear them from inside the house but from the tent last week they were almost deafening.
Posted by Nancy at 12:01 AM