It's our last day of fall break. So for a special treat I decided to take the children to a new park. We have hardly gone anywhere the past seven months, so a new park would be a real treat! It's a park I've seen people posting pictures of but somehow we've never managed to find (in our defense it only opened last year, so I guess it's fairly new to . Finally I pulled it up on the map and figured things out.

It's really the "city green," a little social area behind some shops. There were signs directing us to park in the "parking deck," but I just couldn't find a spot I thought I could pull into, but after a little bit of a panic attack I managed to find this spot that was close enough to being in the parking deck that I thought it counted as such: 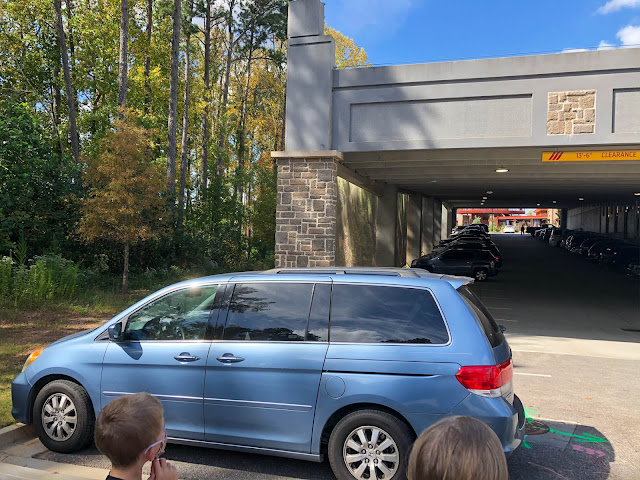 Yes, I know there are several spots visible inside the parking deck but...I left them for someone who feels like they can park in a parking garage.

As we were approaching the park area we heard the distinct murmuring of many voices and I was afraid it would be too crowded for us to stay. But the voices were coming from the cafes (which were packed) and not the playground area, which was lovely.

We mostly had the place to ourselves. The clouds were rather stunning today, I thought: 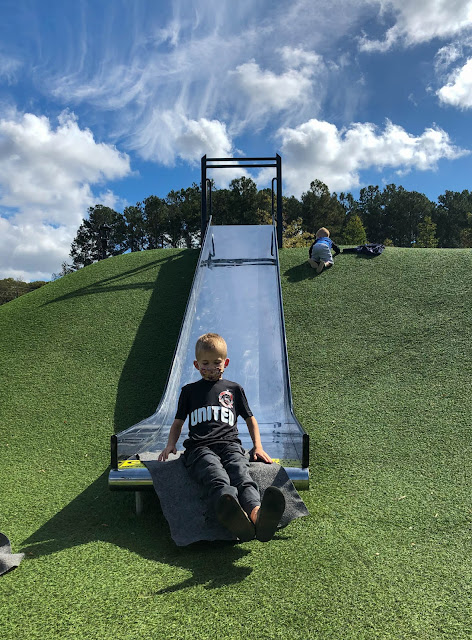 Benjamin really liked this tall slide on a hill (covered in fake turf) that reminded me of something out of Teletubbies. Alexander and Zoë were a little intimidated by the slide and instead slid down the hill on their stomachs or bottoms. At least I didn't have to worry about grass stains! 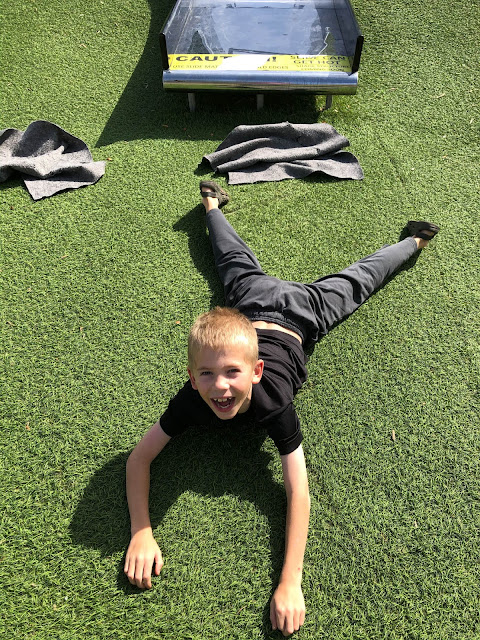 I don't think Miriam had feelings one way or the other, but she did go down a few times (and tried to convince Zoë and Alexander to go with her (they would not be persuaded)). 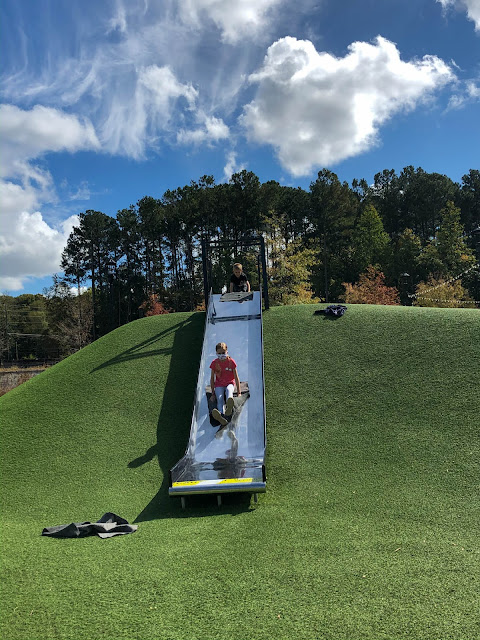 This climbing structure was pretty popular with the kids: 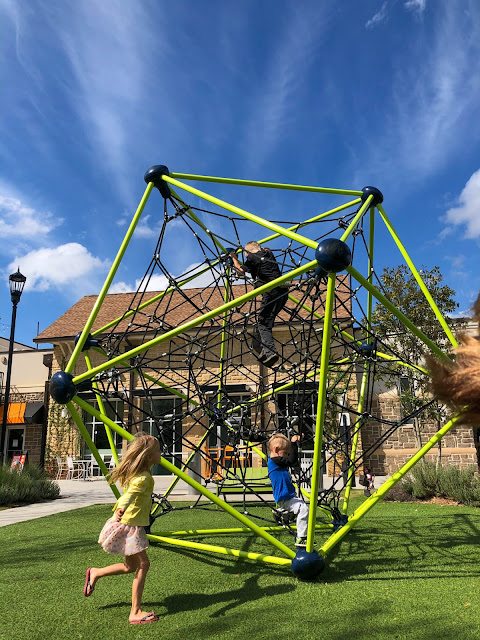 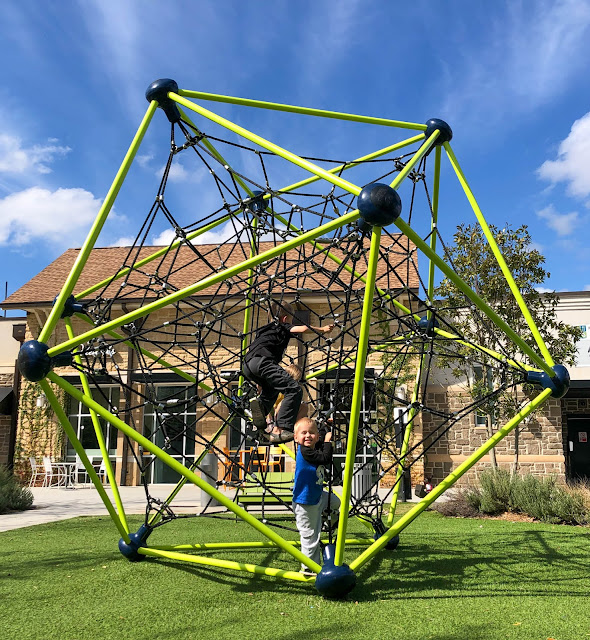 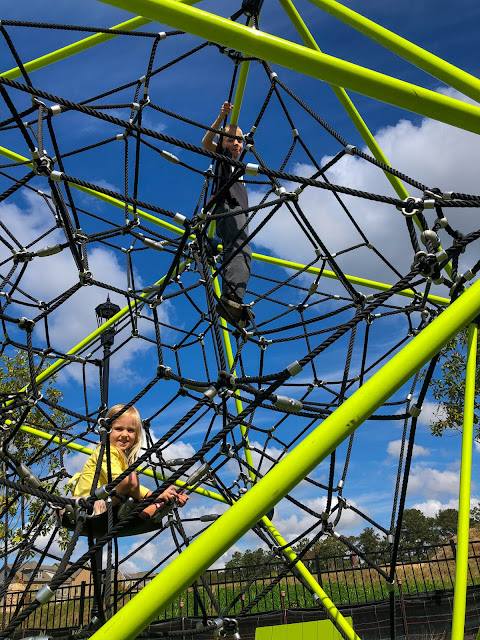 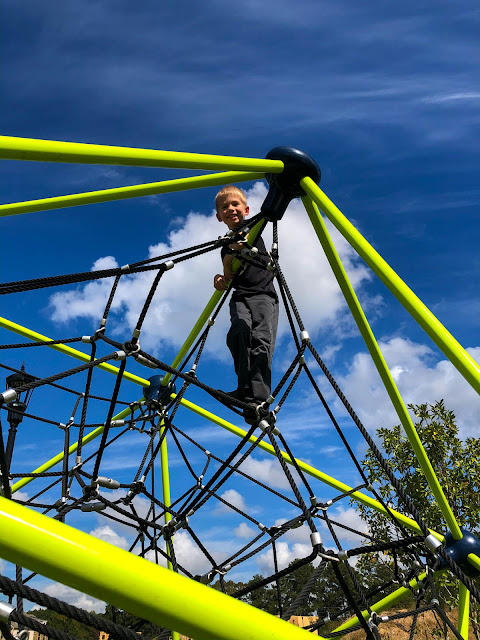 While the green climbing structure is, perhaps, more aesthetically pleasing, the kids did more climbing on this orange one: 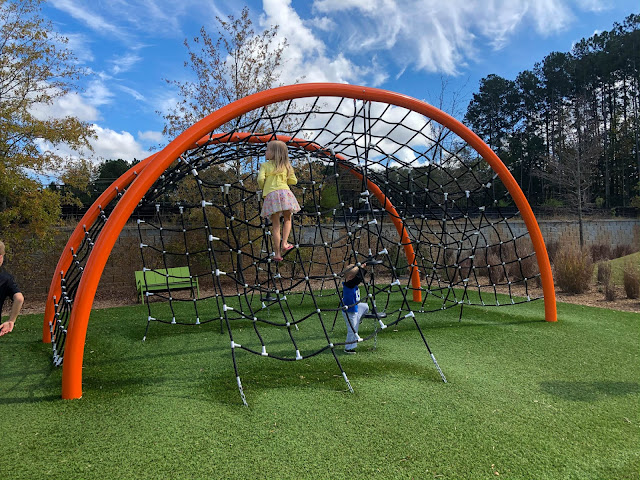 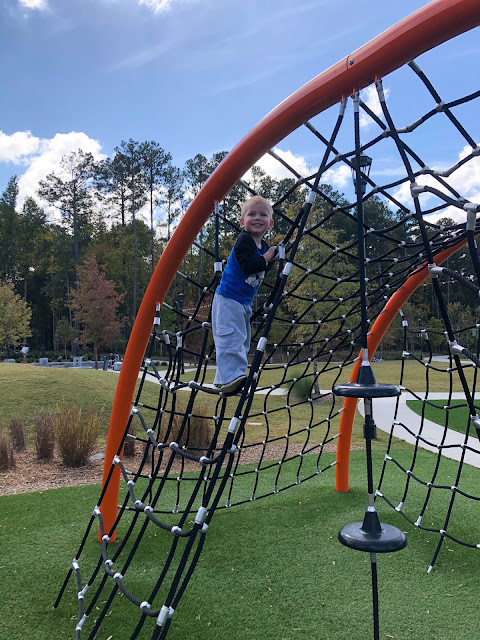 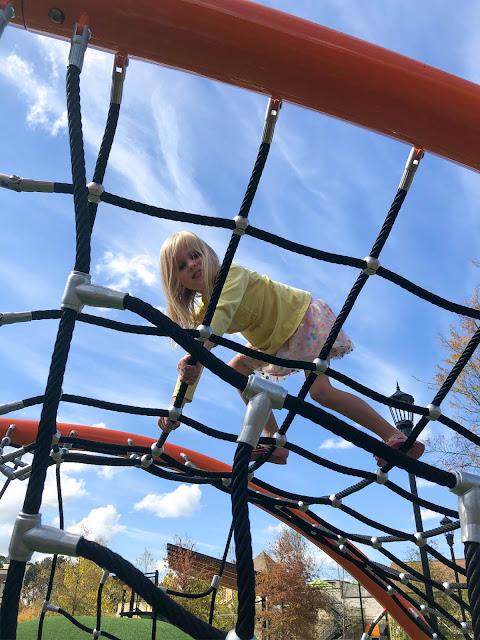 Alexander especially enjoyed this bit of the park: 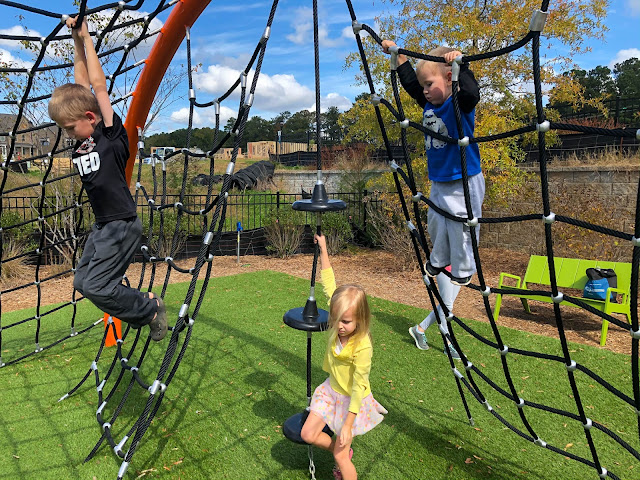 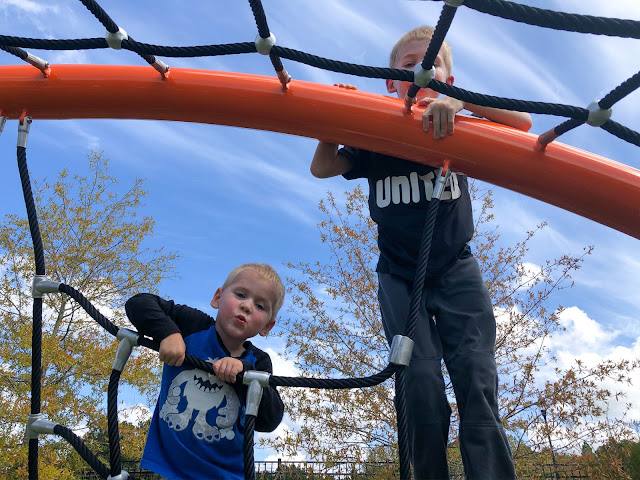 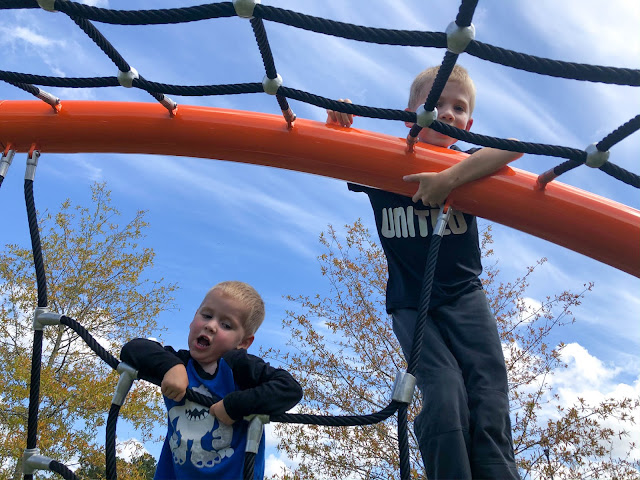 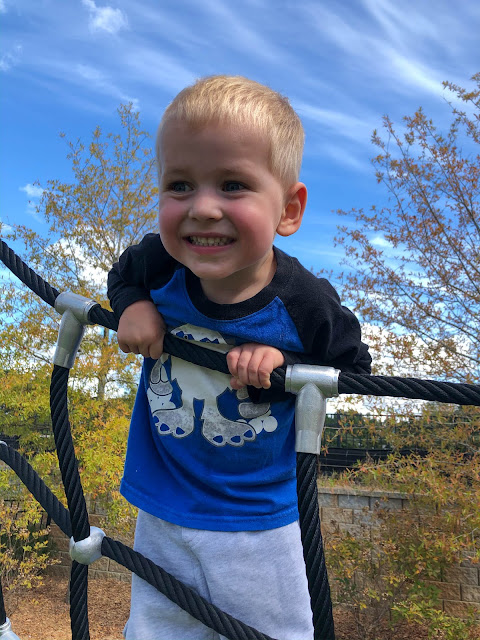 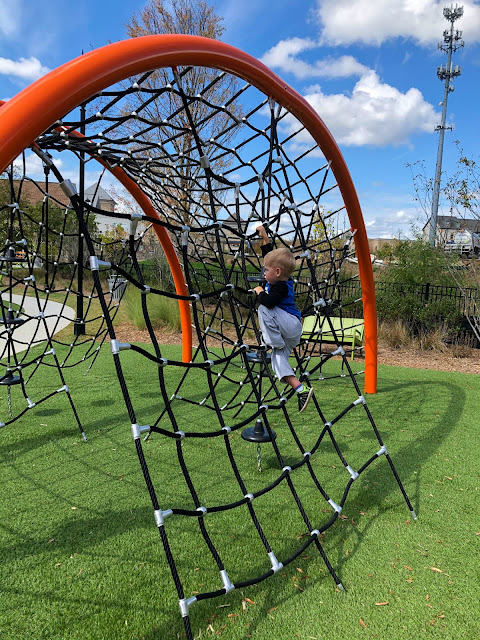 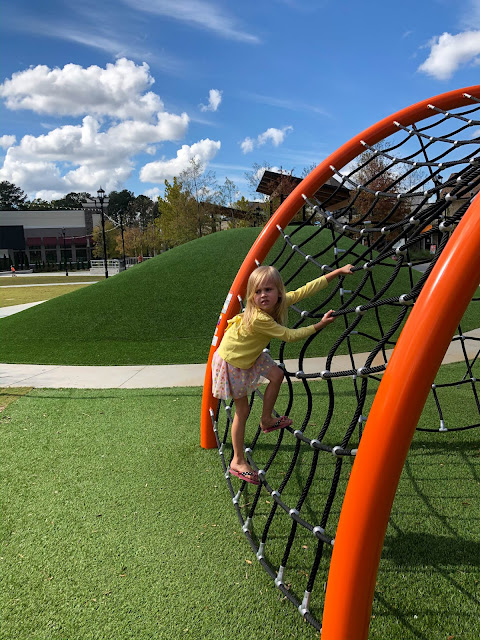 From here we saw some interesting structures out in the woods, which we decided to explore. It's a sort of a ninja course called "The Path to Fitness," and has all sorts of obstacles for you to try. The kids, by far, enjoyed this climbing wall at the very back of the course (or front of the course if you access it from the other side, I suppose): 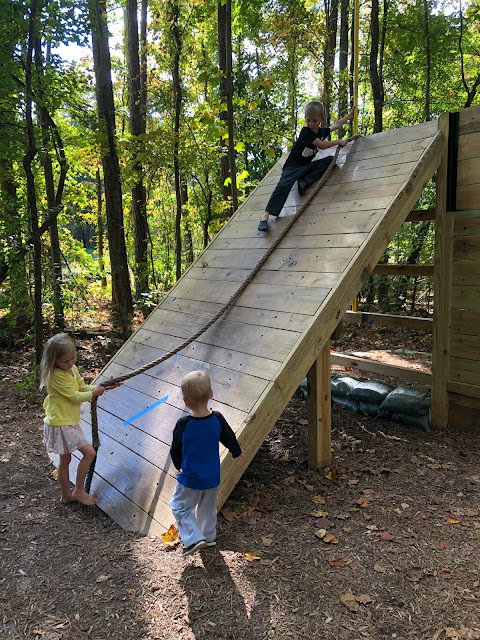 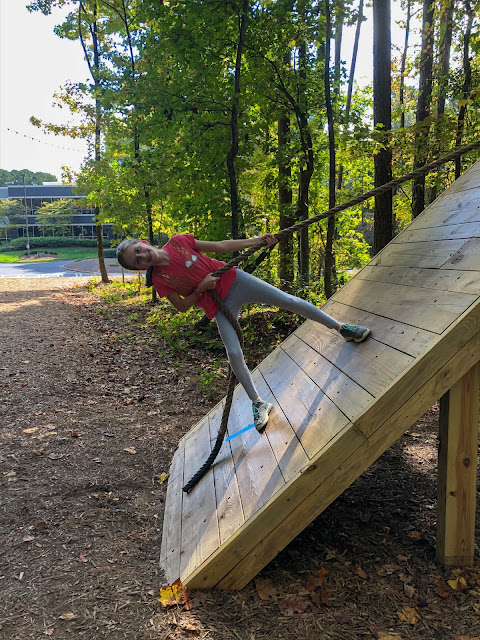 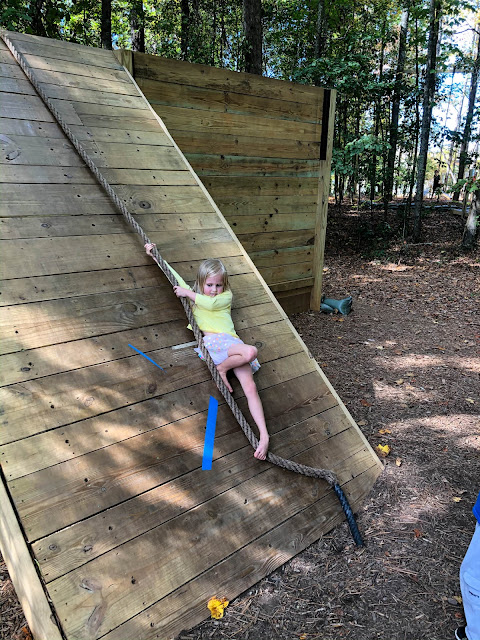 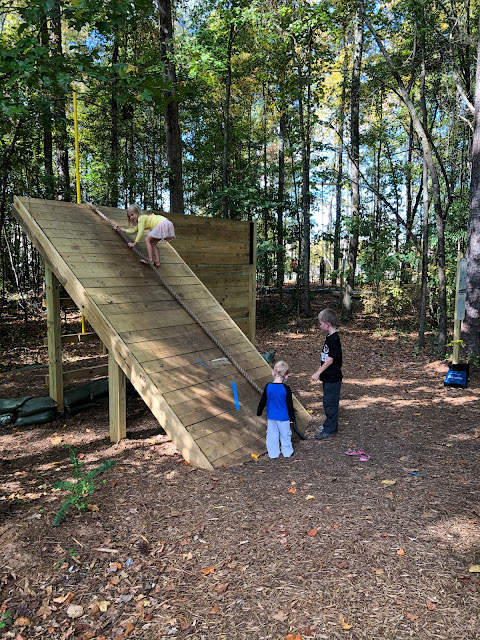 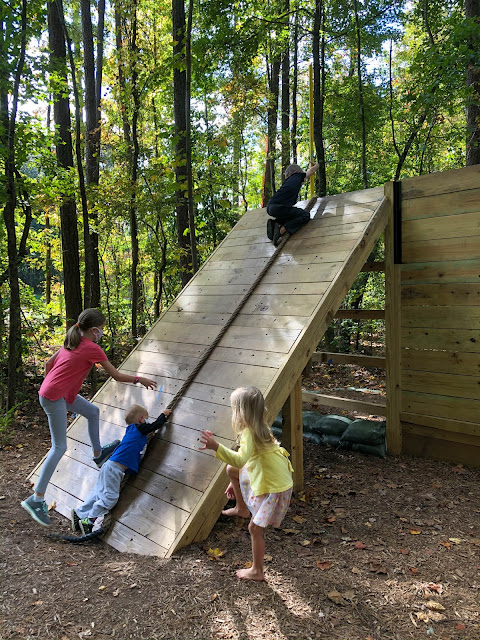 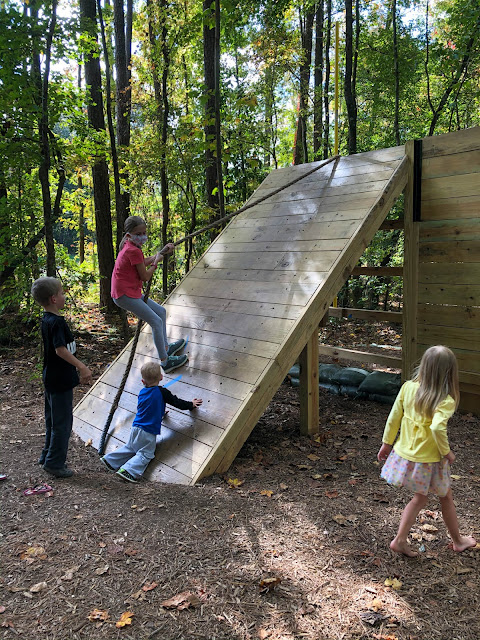 There were other things, too—some parallel bars, an adult-sized set of monkey bars, platforms to box jumps, inclines for sit ups, and some ropes to climb, which happened to by my favourite part of the course. I don't know why, but rope climbing has always been a cinch for me. 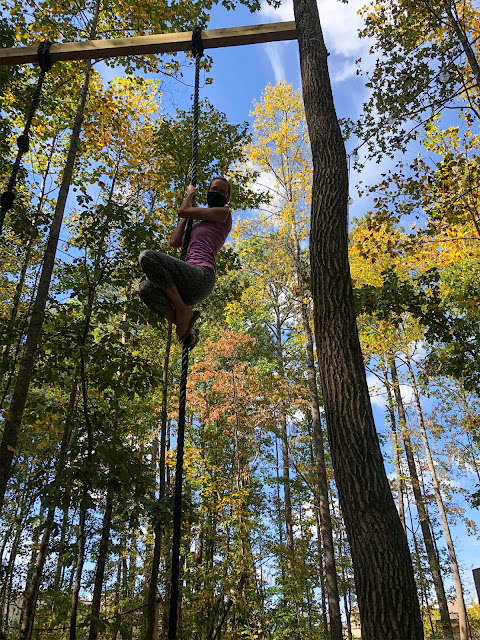 When my older brother was in cub scouts his pack met in a school gym for a while and the gym had one of those pull-out climbing walls that seem ubiquitous to my childhood. I don't know that I've ever seen one of these in American schools, but most of my Canadian schools seemed to have one—a system of bars and ropes that could fold out from the wall. I don't know what they're called, but "Canadian climber" comes up with a few results. And I wasn't even sure that they were still in schools today (or if they'd been removed for safety reasons in this era of safety (but, for real, once a girl in one of our gymnastics classes fell from the top of one of these and broke her arm very badly)), but I found a picture of one from 2017, so they're still around.

You could pull the climbing apparatus 90° out from the wall and anchor it into the floor (there are big metal shafts attached to the legs that drop down into corresponding holes in the floor and lock into place). Ropes and rings and things then hang down from the bar across the top, while the rungs on the side could be used for climbing or to attach horizontal bars to. When we were involved with the Alberta Schools Gymnastics Association, we would set the whole gym up on Fridays—pull the climbing apparatus from the wall, get out the tumbling mat, the balance beams, the springboards and vaults, the uneven bars and so forth—it was quite a lot of work! And then we'd disassemble the entire gym when we were finished in the evenings (my brother and I helped coach the younger classes earlier in the day and then would have our class in the last block of the evening; it was a great program to bring gymnastics around to small towns (our coach travelled all around the Calgary area doing this program)).
When schools do their gymnastics units, however, they'd leave the equipment up the whole time, which was always a nice break for us!
Anyway, my brother's cub scout pack met in an elementary school gym and sometimes they would use the "Canadian climber." I don't know whether they pulled it out themselves or if they only used it if it happened to be out anyway but sometimes there it would be, in all its glory. On days like this the boys would all try to climb the ropes and they would struggle a bit because I guess climbing ropes is hard sometimes. That's...honestly...not something I can easily understand...but I hear it's a thing.
After the boys had all but given up, I walked up to Baloo (which is what they called the cub scout leader...do that do that in the States?) and asked if I could have a turn. I was painfully shy as a child but I also really liked climbing and evidently that love of climbing trumped my oppressive shyness.
"You can try..." Baloo chuckled.
So I grabbed that rope and lickety-split made my way up to the top.
And all those little cub scout boys were floored. Like, literally, they were just on the floor. And I was up in the air. And no one could really understand how little ol' me (I think I must have been six or so) had managed to get to the top of the rope when none of the bigger boys could.
I was secretly thrilled to have the same experience yesterday at the park. While we were mostly alone, there were some kids around (probably around 12 or so) trying out some of the equipment as well. I climbed the rope because...I still like climbing? It's the weirdest, most pointless thing...just climbing up a rope to no where...but...it's still fun somehow. Anyway, I climbed the rope, and these boys were like, "Oooh! Let's try that!"
But they couldn't do it and were simply baffled that I could ("How'd she do it?!").
Honestly, I don't know, myself. I don't think I have impressive arm strength or anything. It's just...a thing I've always been able to do. I used to climb everything when I was little—the chains on the swings at the park, the poles of the swing set, the support poles in the basement (another thing I don't recall seeing in many American basements but which feel rather common in Canadian ones), anything really.
My own children aren't great climbers and I honestly don't understand why or how that can be. But, here they are swinging at the bottom of the ropes: 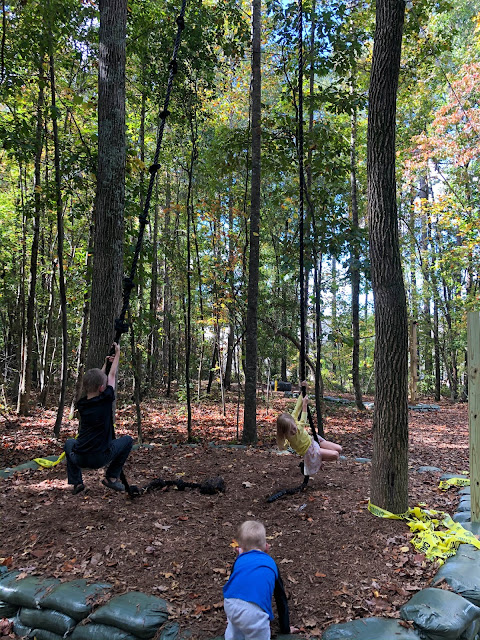 Like, just go up, guys. It's not hard.
Anyway, we eventually made our way back to the climbing wall that the kids were there and while they were running up and over the wall over and over again, we heard an enthusiastic yelp from behind.
"Awwww, yeaaaaah!"
We turned around and found Benjamin's good friend Carter. He's in our ward, is homeschooled, and we used to get together to play at least once a week. Back in the good ol' days, you know. But we haven't played together since February. So it's been a while.
Those two immediately created a game about storming a castle and I wasn't quite sure how to delicately separate them. So instead I insisted that Benjamin put his mask on (which he wasn't happy about). We found the rest of Carter's family eventually, and let all the kids say hello to each other face to face. Here's Miriam (on the right) and Andie talking to each other from their social distance circles (they're spray painted all over the park): 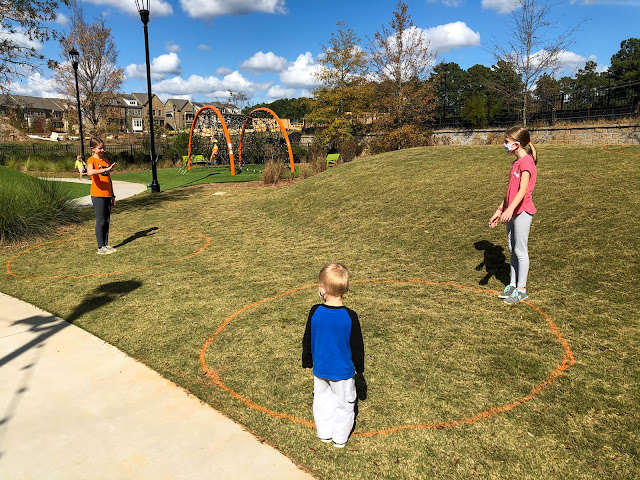 It was nice to see friends, I guess, but it was also upsetting. We don't usually run into friends at the park (this is our first time running into anyone we've known at any park in seven months) and it just...was hard to deal with. The kids wanted to play with each other, like normal, but also knew they couldn't and/or shouldn't. Miriam and Andie took a few laps of the path together, Benjamin was off playing with Carter, Zoë was happy to run around with Kate for a few minutes.

Masks were a complication as well because although my children know they are free to take of their masks when no one is around, they also know they need to put on their masks if they're around others. But our friends didn't have masks (hardly anyone had masks), which made it harder to enforce that rule (Benjamin probably asked me a million times if he could take off his mask).

So really I was just stressed out during our whole interaction that I wanted to break down and cry.

And I don't think I'm overreacting. Yesterday we had over 80,000 cases in the United States, and while it's true that the mortality rate is decreasing (really—not as many people are dying, which is great news), people are still dying (and still at a rather high rate).

And now it's going to be harder to tell our friends, "Sorry, but we are social distancing..." when they know they ran into us at the park. But the thing is that we are typically very careful not to interact with anyone at the park. So I'm just kind of sad and confused by the whole interaction and...am still not signing up for the Relief Society "super Saturday" crafting activity, which is scheduled to take place indoors. Sorry, but I'm just not. I feel like I can't commit to any plans because I don't know what the infection rate is going to look like in just a couple of weeks...and so I also don't think we should be planning for and advertising for activities that could potentially be super spreader events.

This pandemic is, in a word, hard.

Here are a few more pictures of the kids using the big slide: 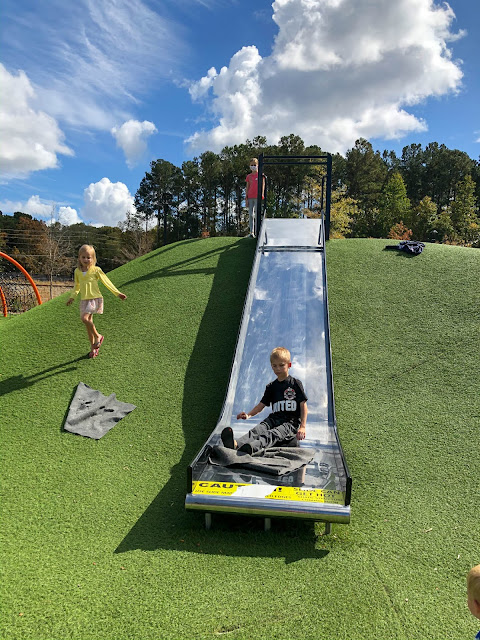 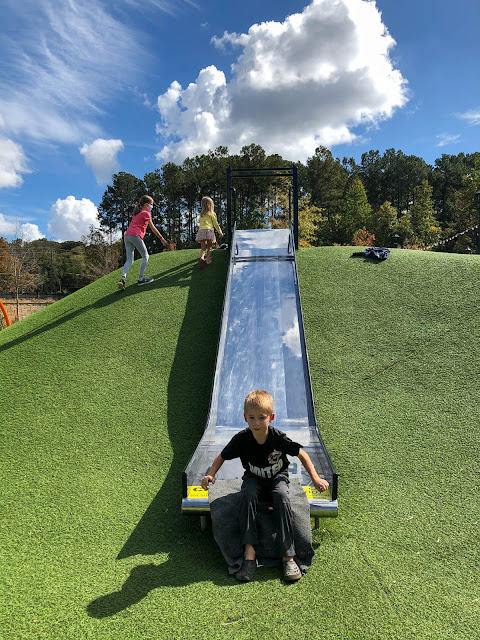 Or, in Alexander's case, the big hill: 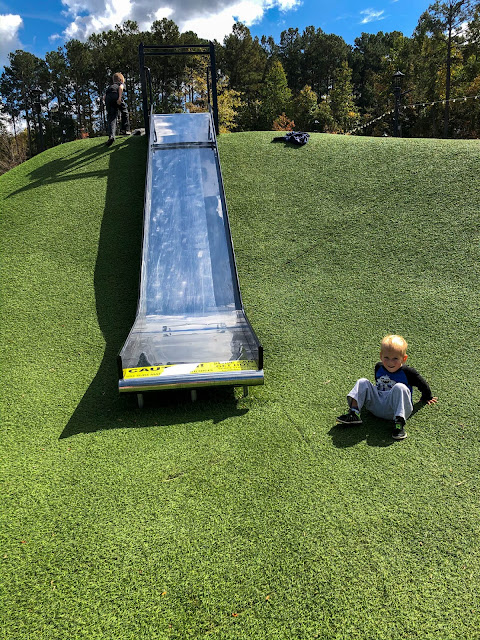 This will probably be our last outing for a while, so I hope the kids enjoyed it.
Posted by Nancy at 1:05 PM