Our neighbour was lucky enough to score a couple loads of fill dirt and when I went to ask her where she got it (because we desperately needs some fill dirt over here) she said someone was digging a pool and wanted to get rid of it so she told them to come dump it in her yard) since she has some low areas she wants to fill). She also said that she probably has more dirt than she could possibly use so we're welcome to some (since her husband is feeling keen to get their driveway back).

So today we prepped our front yard for some DIY landscape work. The house had some scraggly bushes out front that we just didn't love. Plus we need to raise that entire area of the house so that it slopes away from the house rather than towards it, for basement flooding reasons.

Here's a look at our house in July (after our new windows were installed): 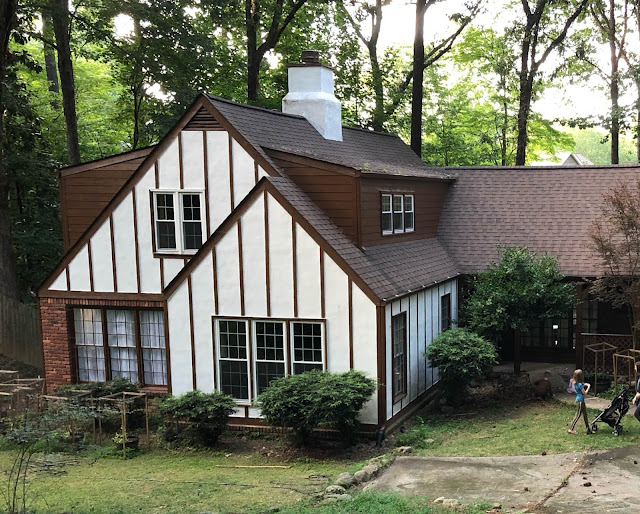 And here's the "after" picture I took today, though we still have a long ways to go before we can really consider it "after": 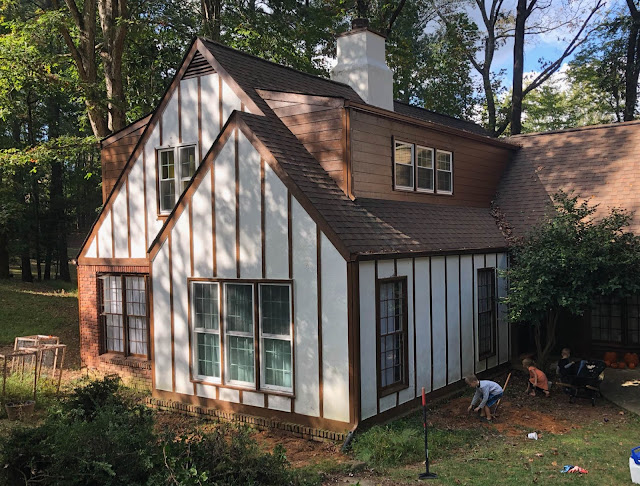 We pulled up all the bushes in a single day!

Andrew was afraid it was going to take us forever (since pulling the holly bushes out at our Hummingbird Lane house really did take forever). Benjamin and I managed to get three bushes out while Andrew was in a meeting, then Andrew came and helped us dig out three and a half more before leaving to take Miriam to her organ lesson. And while they were gone, Benjamin and I took out another bush and the last half of a bush. It was a long, tiring day, but we all survived and we only broke one shovel!

Here are a few pictures of the "during": 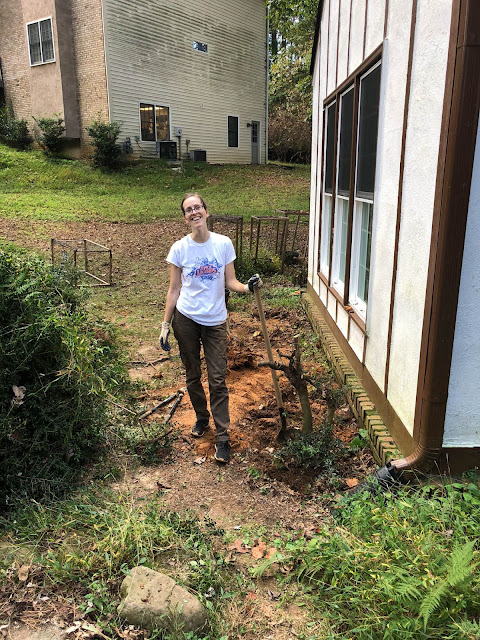 Benjamin was my stalwart helper. He stayed out with me the entire day! Here he is, smacking some roots in the background to get extra dirt off: 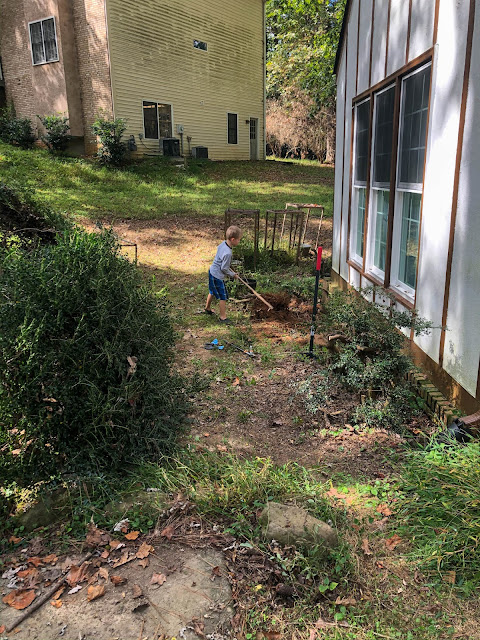 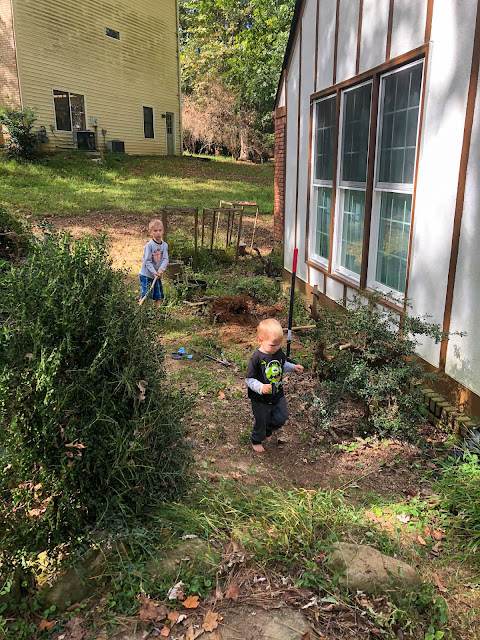 Alexander was my stalwart get-in-the-way-er. But he was fun to have around. We brought him outside with shoes on but he shed them at some point. When we were working on one of the bushes, though, we found a bunch of broken glass on the ground—likely from a broken window at some point in history (whether it broke when they were replacing our windows this summer or whether it broke a long time ago and previous owners simply replaced the pane, I don't know)—so I made him put his shoes back on.

When we picked up his shoe we found a little inchworm doing his best to blend in with his surroundings: 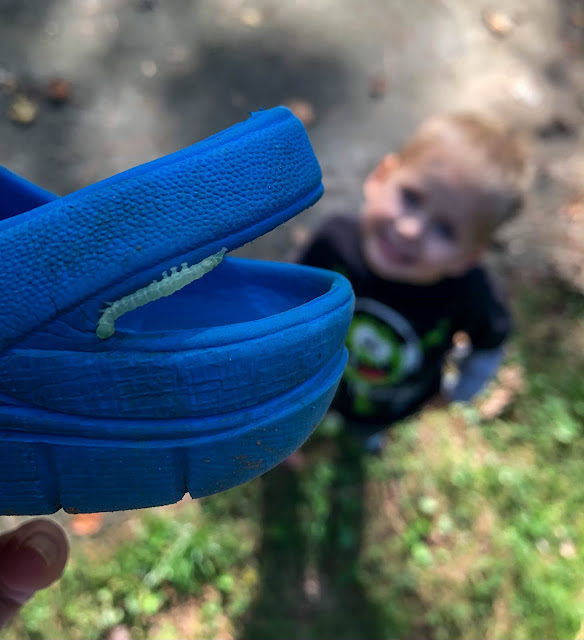 Alexander had fun playing with his new little friend for a few minutes, before I asked him to toss the poor little wormy into the yard before he squished it to death. 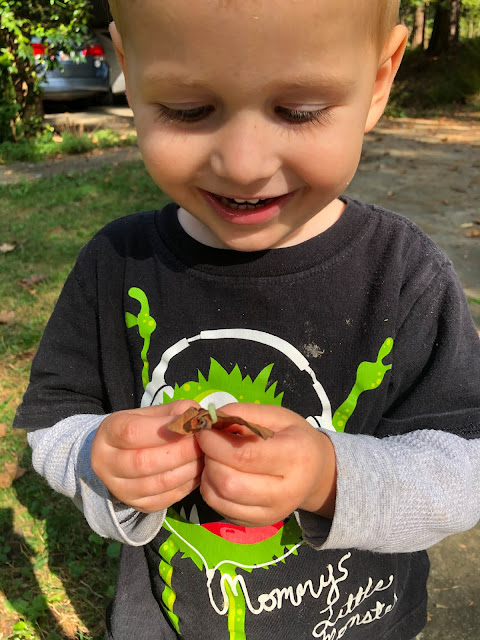 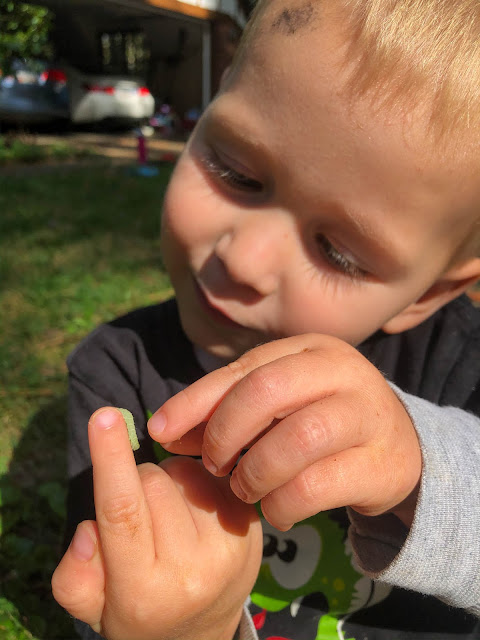 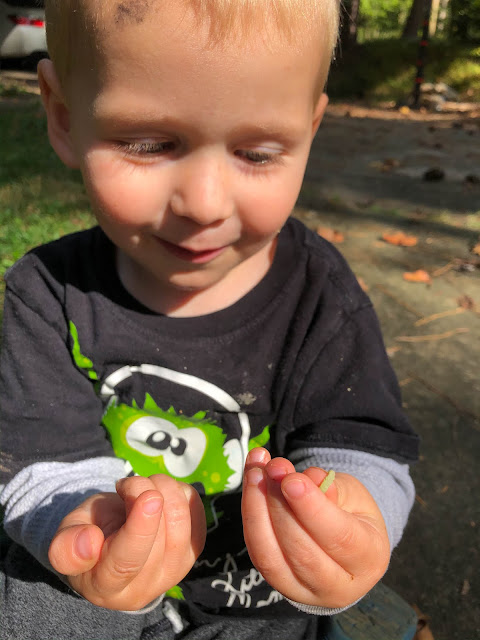 Zoë came out to join us eventually. She wasn't interested in helping very much, though she did do a little rock-picking for me. Mostly she played with Alexander (which is helpful, to be honest) and drew with chalk. She still ended up as messy as anybody.
Here she is up in the tree: 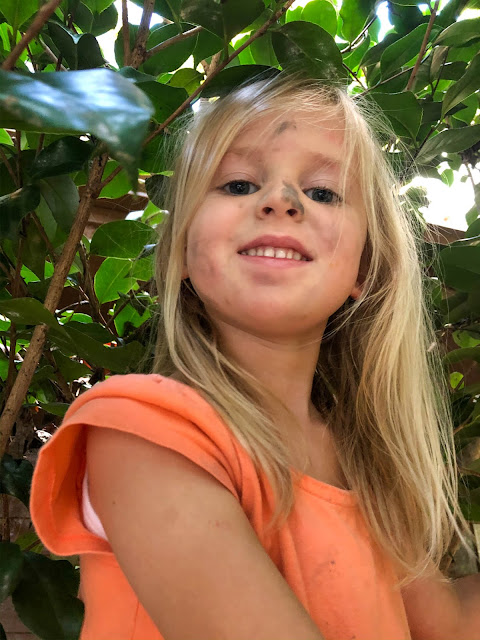 She and Alexander helped move some of our rocks away. We figure we'll probably want to put some gravel on top anyway so why not reuse some of the gravel we already have. It's tedious to pick up...but we have lots of kids...and like like making piles of rocks.
Alexander soon got tired of moving one rock at a time, so Benjamin suggested he fill up a little container with rocks and carry the whole container to the pile to dump it.
"Wow, that is a good idea, Benny!" Alexander said. "Mom, Benny just made me a good idea! Manks for making me a good idea, Benny!"
He and Zoë soon got distracted turning rocks into "Easter eggs" (if you're Zoë), or "Eastern eggs" (if you're Alexander). They fought over this distinction a lot, but they had fun turning rocks all sorts of colours. 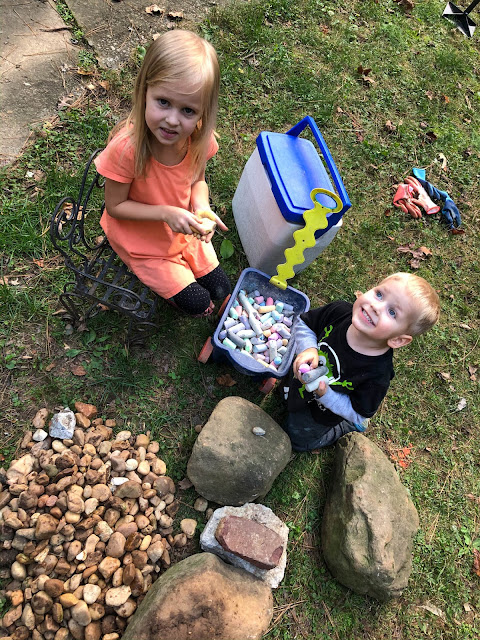 Benjamin also took a few minutes to have fun. Here he is up in the tree: 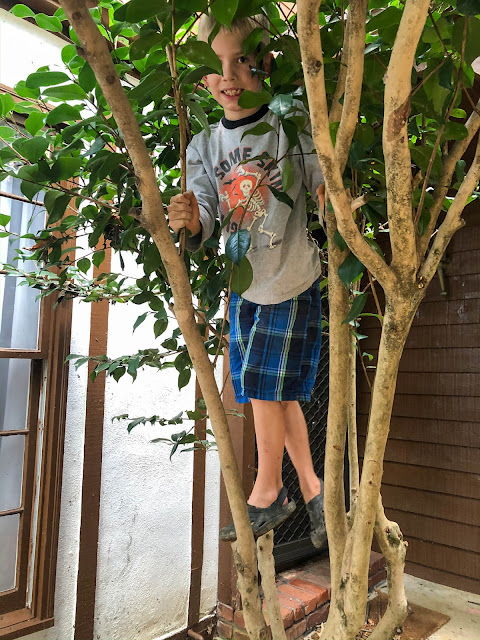 And here he is helping load up the wheelbarrow with rocks (we decided to break out the wheelbarrow after Andrew moved the car to take Miriam to organ because that's about when we remembered that we have a wheelbarrow): 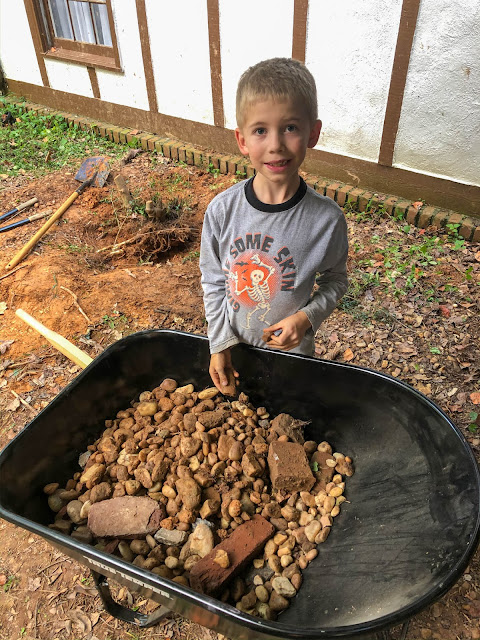 Here are a few of the treasures Benjamin found while excavating in the yard: 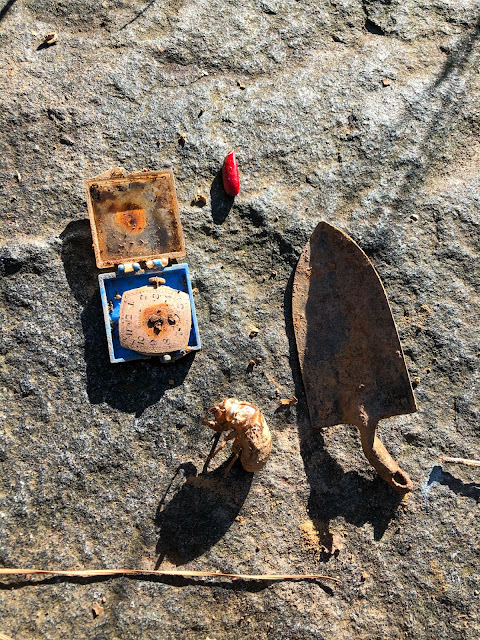 A watch face in a little plastic case, a magnolia seed (which he couldn't have possibly found in the dirt because they get all brown and shriveled soon after they ripen...and we don't have this kind of magnolia tree in our yard), a cicada shell, and an old shovel head.
While we were working a friend of ours pulled up next door. "Isn't that Sister Gray?" the kids asked. Sister Gray was Zoë's Sunbeams teacher and she brought Waffelles to us; the kids love her and was very excited to see her. They were less excited to see that she was stopping by our neighbour's house to pick up cardboard boxes.
"You seem to be moving!" Zoë hollered at her. "Will you be staying in Georgia?"
This was very important for Zoë's little heart to know. Sister Gray will be staying in Georgia...but she will also be moving out of the ward. But she invited us to come over to her new house to help her with her garden once this whole pandemic thing clears up (she's been living in an apartment complex so hasn't had a garden in years). Zoë excitedly showed her the "willow tree" she'd made from bits of yard debris she'd found.
Truth be told, it was a rather hideous creation, this Frankenstein-bush she'd cobbled together.
"That's a beautiful willow tree," Sister Gray gushed. "I just love it so much! I'll have to borrow that idea for my new yard!"
"Oh, you don't have to borrow it," Zoë said magnanimously. "You can keep it."
"Yes, well, I will certainly be keeping that idea in mind, then," Sister Gray said. "How lucky I am! I thought I was just coming here to pick up boxes but I'm picking up all kinds of landscaping tips, too!"
Sister Gray is, if you can't tell, basically an angel. After some "air hugs" were exchanged, she hopped in her car to head home and we finished up a few things in the yard.
Not bad for a hard day's work.
I should also mention that the kids spent the morning creating some Halloween decorations. I ordered a big pack of googly eyes, specifically for a primary activity...but also just to have...and the kids found them and went crazy with them—specifically Alexander. 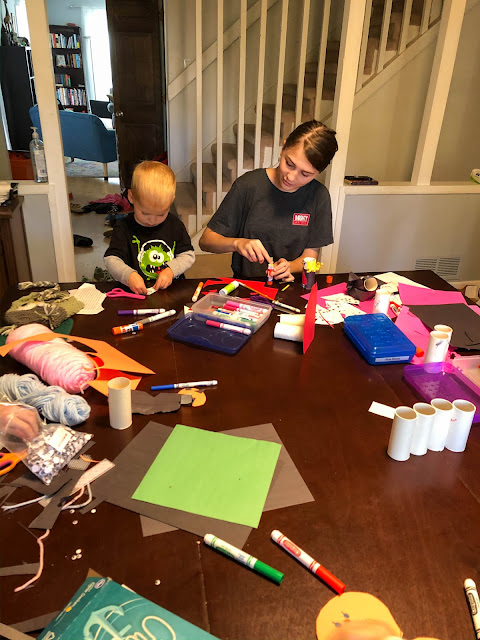 Here you can see his pile of googly-eyed monsters next to the little vampiress Rachel is putting together: 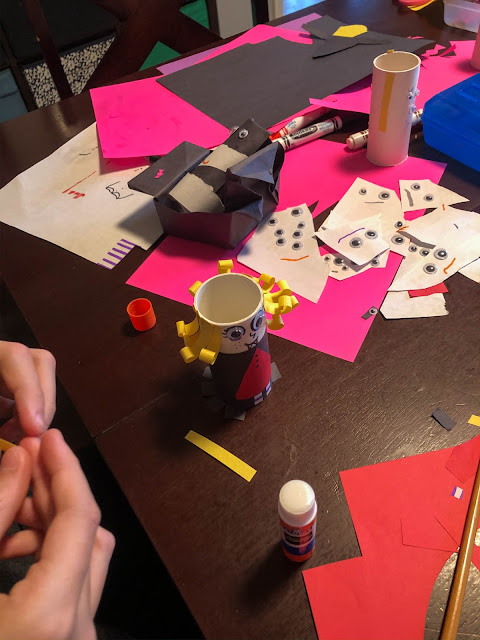 I'll have to take some better pictures of the children's creations tomorrow. They came up with some pretty cute things!
Posted by Nancy at 12:32 AM