Zoë, at your serviette

We've been doing far too much reading lately, which might not be a thing you'd think would be possible but in our case...it just might be. Because we're planning on taking our fall break next week, the older kids have been pushing to finish reading The Scarlet Pimpernel so that we can have a movie night. This has made for some long mornings of reading, which can be difficult for Zoë and Alexander, who aren't following the story quite as well as the big kids (though still Zoë is able to recall a surprising amount of information; even when I'm struggling to recall character names—the other French girl...whatever-her-name-is De Tournay—Zoë can come up with the names in a snap—it's Suzanne).

This has led to some perceived naughtiness on their part (perceived because they aren't trying to be naughty, necessarily, but are being so rowdy that they're driving everyone else bonkers). They won't leave to go play elsewhere, though, because they want to listen to the story, too. So it's been a little tense the past couple of days, just trying to balance everyone's needs and personalities.

And we've just been juggling so long, you know.

Thus the need for a break.

Anyway, we finished reading this morning and I gave the kids their writing prompt and set them loose and Zoë and Alexander went into the living room to...read some more!

Zoë is a very fluent reader and will read anything she can get her hands on. She's also a very expressive reader, an indefatigable reader.

Tonight she tried to read the entire 48 verses of 3 Nephi 12...even though we told her that she wasn't allowed to read the whole chapter by herself because other people wanted turns. She aggressively read the first 12 verses (yes, aggressive reading is definitely a thing) and then aggressively followed along and anytime anyone paused to take a breath or swallow she would cut them off and aggressively begin plowing through more verses.

She's got fluency, expression, and endurance.

The only thing she can't quite manage is to read in her head.

This works out well for us, though, because she can usually find a willing listener.

Here she is reading to Alexander, who moments before was so exhausted from listening that he couldn't manage to sit still or keep quiet (in his defense, there were no pictures): 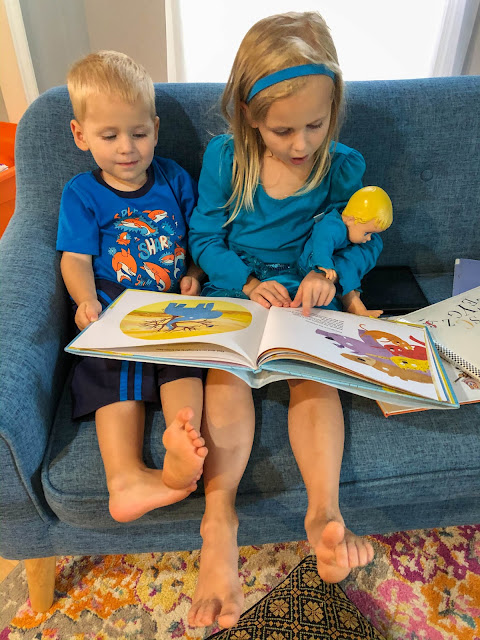 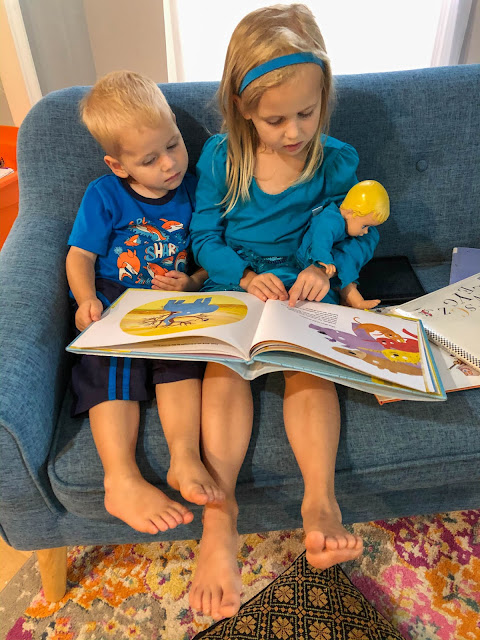 Today one of our chapters was called "The Jew."
Benjamin, who has been studying French asked, "J-E-W? Or J-E-U?"
"What?" I asked him. "Why would it be J-E-U? Oh. Because that's how you spell 'game' in French. I see. That might make a good name for a chapter in this book, actually."
We then discussed that jeu is pronounced /zhoo/ not /joo/.
For our social studies portion this week we read The Bill of Rights (and parts of the constitution) and compared it to The Declaration of the Rights of Man and of the Citizen. Both were written in 1789, The Declaration of the Rights of Man and of the Citizen by Abbé Sieyès and the Marquis de Lafayette (in consultation with Thomas Jefferson) and The Bill of Rights largely by James Madison.
My favourite article of both sets of rights is Article IV from The Declaration of the Rights of Man and the Citizen, which says that "liberty consists of doing anything which does not harm others: thus, the exercise of the natural rights of each man has only those borders which assure other members of the society the fruition of these same rights."
Sometimes I feel like the words "freedom" and "liberty" are bandied about without anyone really knowing what they mean...because they're not very well-defined terms in American society. I hear so often that people care about "freedom" but I...just...am never sure what they mean by "freedom," you know? We're obsessed with the idea but it's also something we can't put our finger on.
I once was traveling in Canada with an American who said, hoping I'd agree with them, "Don't you miss America? Don't you just feel a little less free on this side of the border?"
And I was like, "What do you mean less free?"
"Like, I just feel so free in America and I just don't feel free here."
"What's free?" I asked again.
We weren't in chains. We weren't behind bars. No one had a gun to our heads (and, in fact, statistically speaking we were at a much lower risk of having a gun held to our heads at all in aforementioned location). We were gathered around the table at The Farm (meaning, of course, my aunt's farm), looking out the large kitchen window at the ripe rolling prairies, the endless blue skies...
It felt free enough to me.
The idea of America having a corner on the freedom market is so bizarre to me because when I've asked what people mean by "freedom" or "liberty" they just...can't...quite...verbalize it. What's the point of being the most of anything you can't define?
I loved having it spelled out. And I loved having it spelled out in such a caring way—that you can do what you wish, so long as it doesn't harm anyone else.
Rachel pointed out that such a clause would make issuing a mask mandate much easier. We also laughed a bit over how beautifully crafted this document was, at how wonderfully it details the rights of the people...and how it was so quickly disbanded so they could start decapitating people willy-nilly. It's referred to in the "preamble" of France's current constitution, so the efforts that went into writing it weren't wasted...but still.
And, of course, there's the messy business (for both The Bill of Rights and The Declaration of the Rights of Man and of the Citizen) of the fact that neither document considered the rights of women, children, slaves, or foreigners to be of any importance (a rather unfortunate oversight, one that is still in the process of being rectified today).
I really want to raise my children to be socially minded, but sometimes I'm not the best at it. Tonight at dinner, for example, Zoë suddenly—and very loudly—became obsessed with whether or not everyone had access to a napkin.
"Miriam doesn't have a napkin!" she yelled. "Miriam, where's your napkin? Do you have a napkin? Mom—I don't see your napkin! Do you have a napkin, Mom? Someone get Mom a napkin! Who set the table? Alexander! It was you! You forgot to get Mom a napkin and you forgot to get Miriam a napkin! Everyone else has a napkin! Why didn't you get a napkin for Mom or for Miriam!"
"Zoë," I said, pulling my napkin from my lap. "Stop yelling. My napkin is right here."
"I've got one, too," Miriam said, waiving hers in the air.
"Quit worrying about everyone else and start worrying about what you need to be doing. You need to eat your dinner. If someone doesn't have a napkin they can just get up and get one. We all know where they're kept. Sit down, quit yelling, eat your dinner."
But then later I was thinking about how I do want her to notice if someone doesn't have a napkin! I really do! I simply would prefer if she would notice and then calmly ask if they need a napkin and then calmly get one for them (assuming they don't have one) or calmly move on with life (assuming they do). Because I really think that it's good that she was noticing an inequality at the dinner table; I just don't think she needed to be jumping up and down screaming about it.
So I'll have to see if I can explain that to her tomorrow because I don't want her to ever stop looking for inequalities. I want her to fix the easy ones right away and I want her to jump and yell and scream about the hard-to-fix ones.
I don't want to quash her spirit...but I also want her to sit down and eat her dinner.
But how to teach her both things at the same time? It's a real conundrum.
Posted by Nancy at 12:10 AM