Tickled pink (or blue or brown)

Alexander loves to name his toys. His owls all have names—Bluey, Hedwig, Spot, Brownie, and...I can't think of the other one—his doll is named Tom. The other day he was having me draw pictures and he asked if I would draw a picture of his puppy, so I did. And then he asked if I would draw a dog house for his puppy to live in, so I did and decided to put a sign on the dog house, so I asked Alexander what his dog's name was.

"His name is...he doesn't have a name yet!" Alexander panicked.

Alexander scanned the room, finally settling on some bottles of glue the kids had left on the counter.

I thought his naming process was so cute, so I was telling my family about it on a group video call. When I announced that his name was Gluey, Rachel snickered, "That would be a good name for a horse."

My family rather appreciated her dark humour.

Today Benjamin agreed to do a difficult job for me (squeezing between the wall of the downstairs bathroom and the foundation to get some trash left back there (by the previous owners)), which he was rather reluctant to do but which when it came right down to it he found he rather enjoyed it.

"You're a good man, Charlie Brown," I told him.

We had a lovely Thanksgiving dinner this evening, cooked up by Rachel and Andrew, and while we were talking, the topic of Alexander's birthday came up. Alexander is very excited about his birthday and has all sorts of plans for his special day.

"That's right," Andrew teased for some reason (because...he's a tease), "You're going to be four!"

Alexander was evidently not in the mood for teasing because he burst into tears.

He needed a lot of comforting and Daddy had to apologize profusely before he gulped down his tears and started picking at his dinner. But for some reason, long after he'd calmed down, Zoë walked up beside him and he threw his arms around her neck and sobbed, "Bobo! Daddy said I'm going to be four!"

She sweetly stroked his back and reassured him that he was just going to be three.

For family night we started on our Thankful Tree, complicated by the fact that it's Alexander's birthday on Wednesday. So we did both "love balloons" and "thankful leaves." Somehow we've developed a tradition of writing acrostics for everyone on their birthday and the kids were coming up with some interesting poems for Alexander, whose name is a little tricky because of the X.

She decided against "almighty" so that her poem simply reads, "a loving, exceptionally cute XY chromosome."

Benjamin was really struggling with X so I told him to grab the dictionary, which was a mistake. He flipped to the X page and exclaimed, "Hey, Mom! I found you in the dictionary!"

And he pointed to...Xanthippe—an ill-tempered woman!? 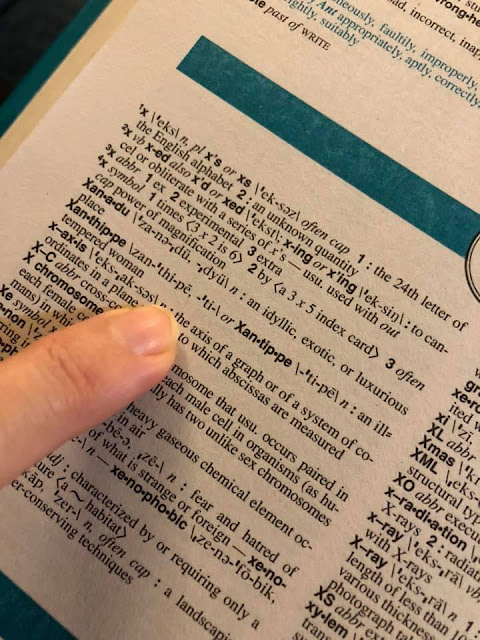 We all had a good laugh about that! Apparently that's the kind of humour our family enjoys.