Miriam turned 11 today, which is breaking my heart a little bit. I have enjoyed being her primary activity leader so much and I'm going to miss her when she graduates into the Young Women's program in January (it still blows my mind that all the girls move up together because when I was that age you had to wait until you turned 12 to graduate from primary, a policy that came with its own set of challenges). But it's not like she'll be entirely gone from my life.
I mean, we're homeschooling and are in the middle of a global pandemic so tend to just stay home a lot, so I'm going to see her frequently, and I'm sure she'll enjoy getting to spread her wings a little bit, assuming we ever get to a wing-spreading stage...which...I mean...I dunno.
This afternoon I did get an email notifying the young women and their parents that all in-person activities have been cancelled through November and will be replaced by virtual activities (three cheers for that because...hello), due, of course, to the pandemic and the rising numbers we're seeing now. While I'm happy about this change, I do find it confusing because our numbers are still lower than they were when they originally started pushing for (and holding) in-person activities while Rachel and I were raising a big fuss about...you know...the pandemic. And now that the numbers have been, from my perspective, holding steady, they are suddenly deciding to not have in-person activities.
Nationally, our numbers don't look great so I imagine Georgia will spring up there soon. But I think this call has less to do with Georgia's numbers (or even our county numbers) and more to do with the fact that there are "a few" cases within the ward, though I don't know that we'll ever know who.
But none of that has much of anything to do with Miriam's birthday and more to do with just my overall feeling of being crushed alive. It's fine. I haven't been finding the time I'd like to write (here or elsewhere) and so I'm going to squish my "October Birthday Buddies" into one post, which really isn't fair because although they are born within the same month, their birthdays are farther apart (11 days) than Zoë and Benjamin's (10 days), though not by much. This is just one more way for them to learn that life isn't fair (and that it can't be fair)—sorry and you're welcome.
First we'll catalogue our birthday balloons. Here's Alexander with his birthday balloons this morning before we finally took them down. We meant to get around to making more for him but his birthday ended up being a little busier than we expected—with re-stretching our carpet and putting our basement back together. 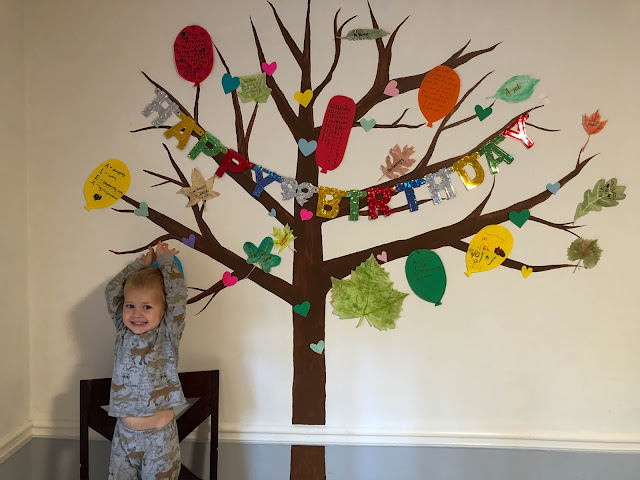 Andrew wrote a big 4 on Alexander's balloon, crossed that out, and wrote a 3. Alexander is very proud of being three and does not like to be teased about being any other age. So naturally Andrew decided to tease him about it a little bit more. He also wrote a little acrostic poem for Alexander:
Awesome
cuddLy
lovEs fun
eXcellent
I said, "You are so tender and compassionate, always good for a cuddle. I have a feeling you will be a passionate 3-year-old! I love you!"
Rachel wrote a poem:
A
Loving
Exceptionally cute
XY chromosome
Miriam wrote this acrostic (long-ostic) monstrosity (it hurts my brain just to look at it): 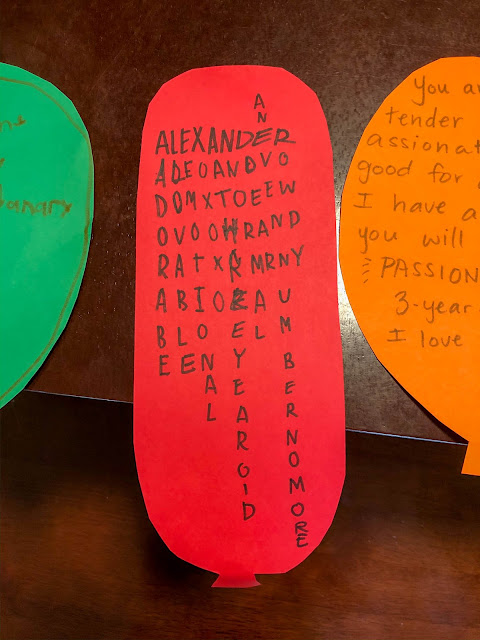 Instead of spelling his name down the page, she spelled his name across the top and each of the words she associated with him are running up and down.
Adorable
Lovable
Emotional
XOXOXO
A three-year-old
Normal
Dear
(an) Even number no more
Rowdy
Benjamin also wrote an acrostic:
Awesome
Lovely
Extraordinary
XOXOX
Zoë made him this lovely balloon: 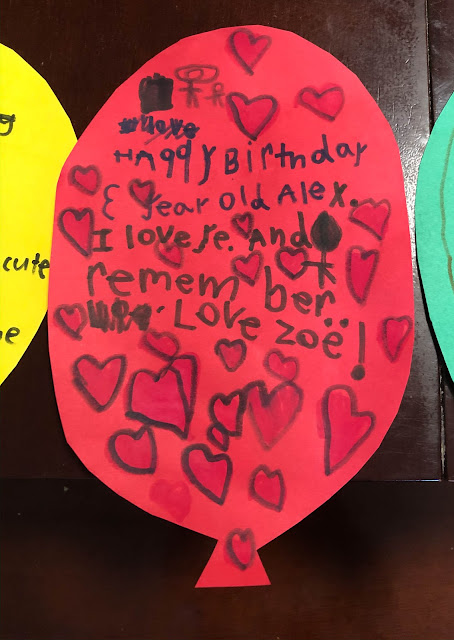 It says, "Happy Birthday 3-year-old Alex. I love ye. And remember. Love, Zoë!"
Because sometimes you can say "ye" instead of "you," Zoë told us, and I suppose she's not wrong.
We filled out Miriam's birthday balloons in the break between sacrament meeting and primary. We had about forty-five minutes to kill (while we wait for those who attended—like all six of them (Really! They added a view of the congregation for those of us "dialing in" and there were about six people in the pews)—to run home before our second hour of meetings), which was plenty of time for everyone to write on a balloon or two for Miriam. 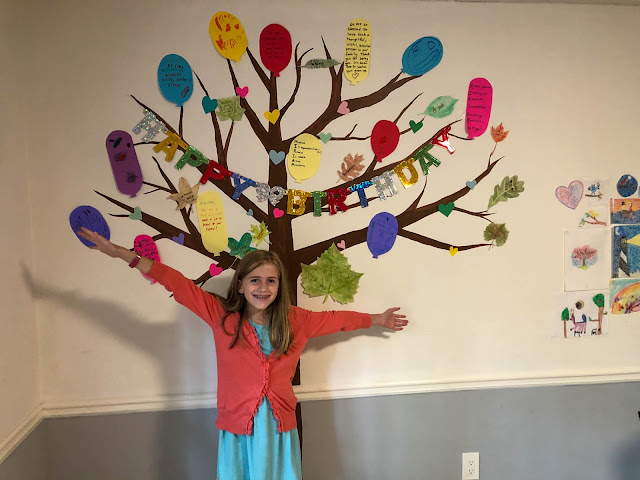 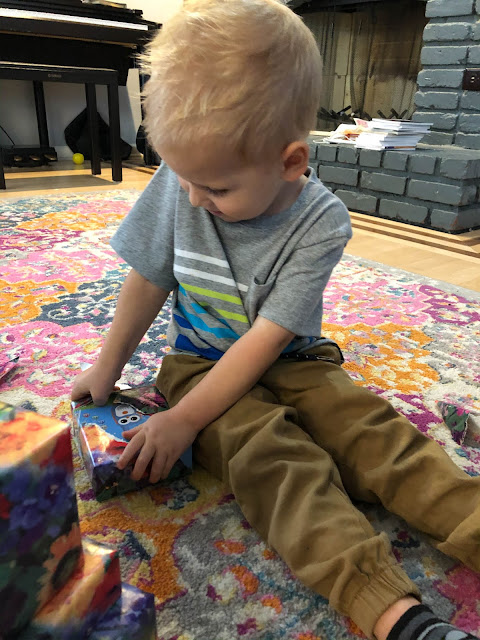 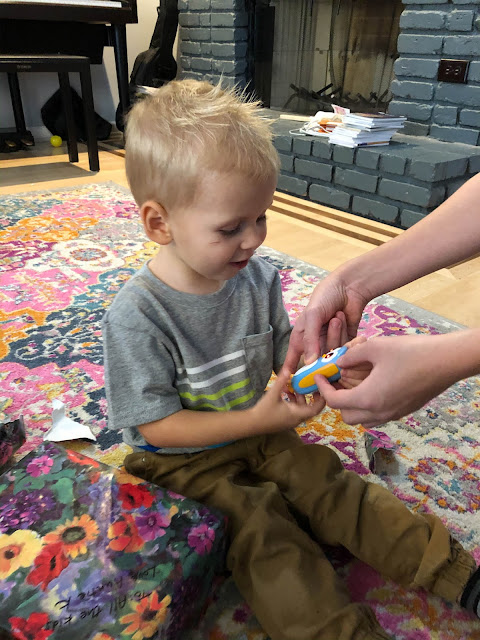 The kids have all enjoyed playing with them a lot! They've come on walks around the block and out to the river and have been involved in games of hide-and-seek... 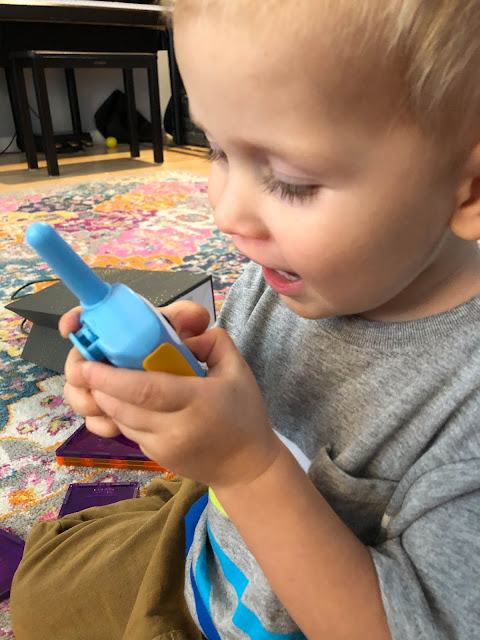 Here he is opening up the game "Hoot Owl Hoot": 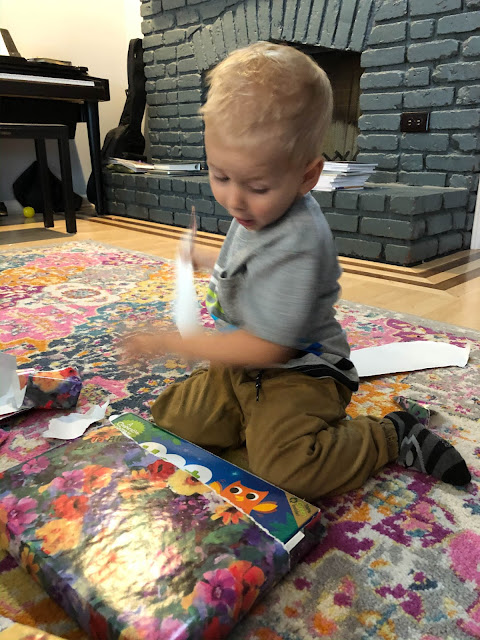 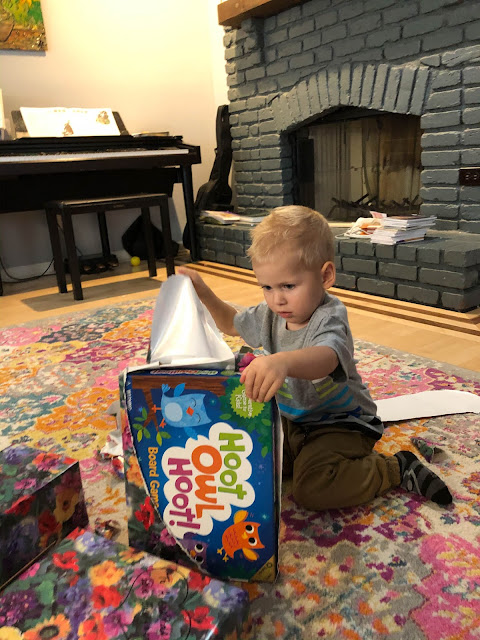 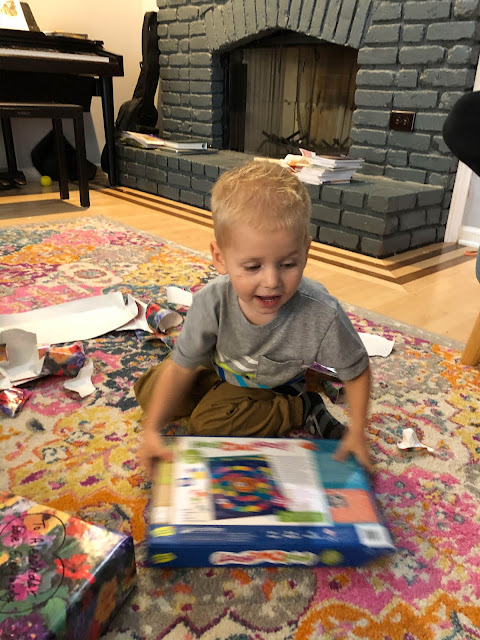 Here he is opening his "Picasso Tiles": 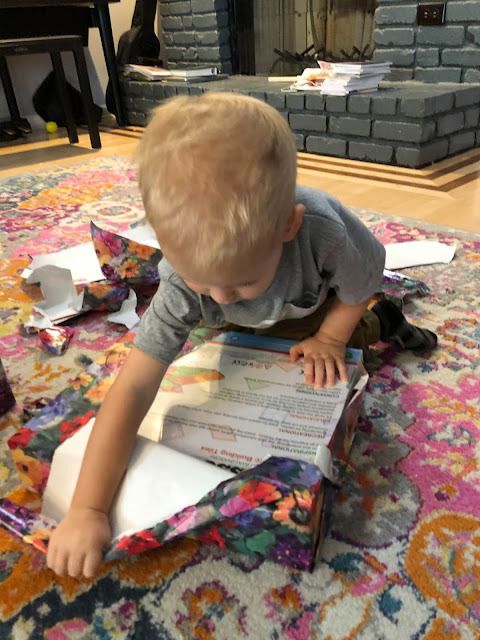 And here he is opening a set of bear counters from my mom: 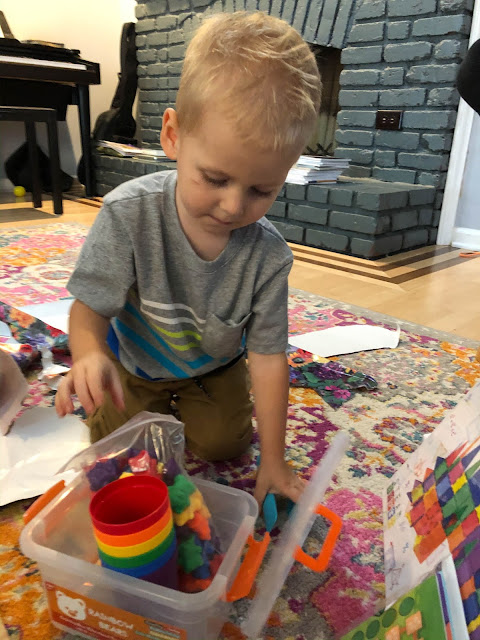 Patrick had a set of these counters when he was little and I remember enjoying playing with them so figured the kids would like them. Miriam and Rachel remember using them at Easley (I know for sure that Mr. Alban had a set in his classroom, but it's likely other teachers did as well).
Miriam made Alexander a cute card with owls and bubbles, at his request: 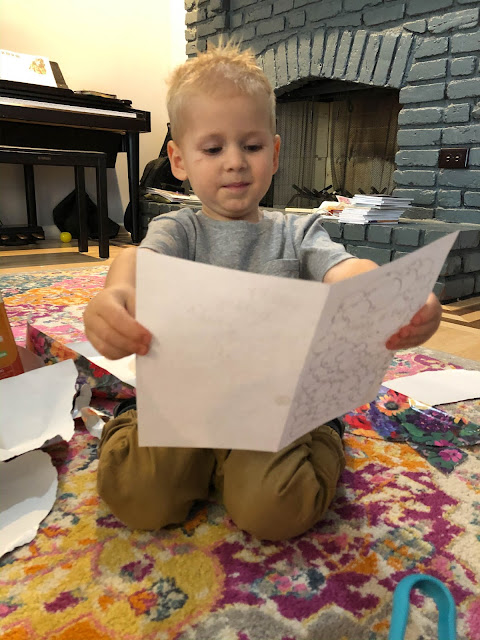 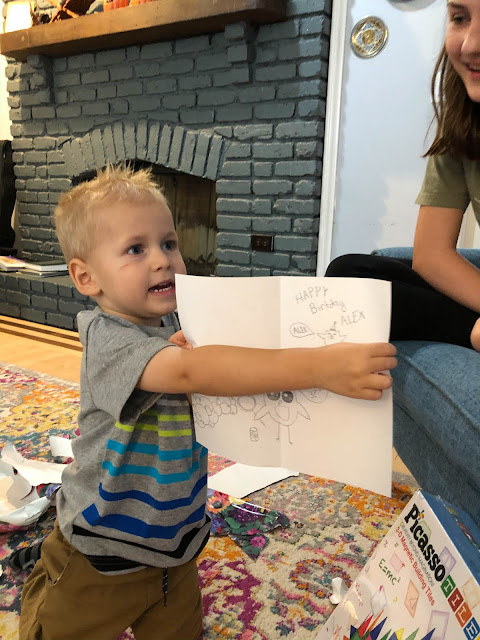 She also wrapped up a couple of her old stuffed animals to give to him, which he was thrilled to pieces about. 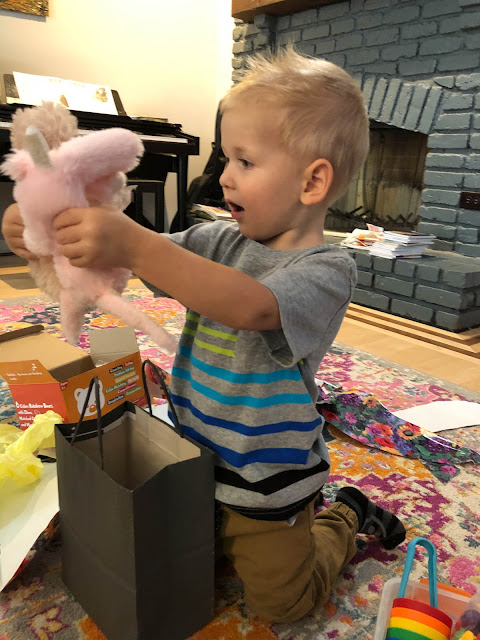 He hugged them and murmured, "Just what I always wanted!" 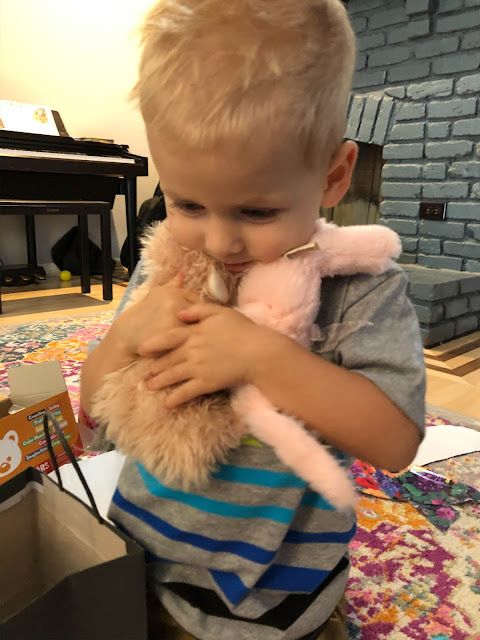 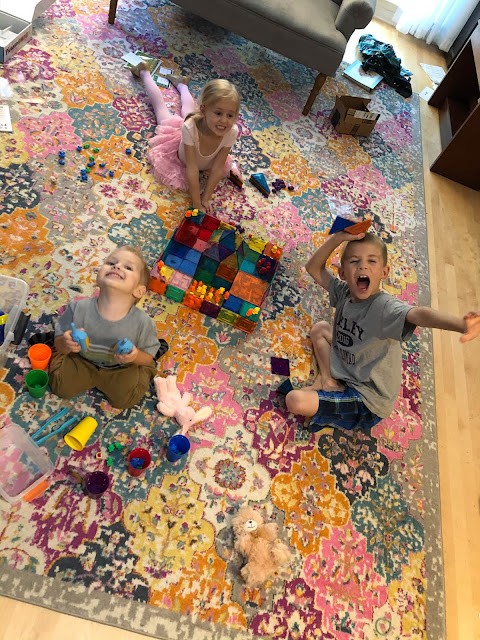 I'm hoping these new things will keep him somewhat occupied while we're doing our lessons (we're starting back up tomorrow).
And here is Miriam opening up her presents this morning... 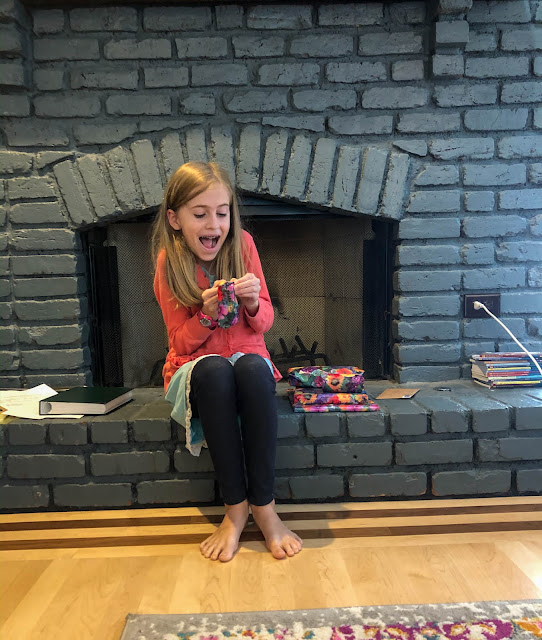 Unlike Alexander who was ripping into things, Miriam very meticulously unwrapped her presents without even a micro-tear.
Zoë made her some little people from cardboard that was on our new smoke detectors (because like everything else in our house, one of our smoke detectors stopped working (and started beeping incessantly about it) and changing the battery didn't fix anything so we had to get a new one, but they came in a pair so we got two new ones (as well as some extra ones to go in each bedroom since that's "code" now): 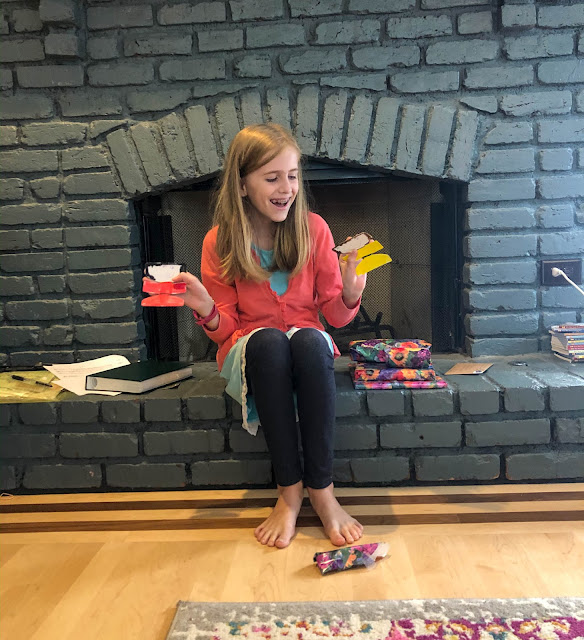 We got her some velcro dots for a needlepoint project she's been working on. She was very excited about the velcro dots and...I guess that's the secret to giving a good gift. Delay in giving someone something while they spend months begging and begging for it. That way they'll be so happy when it finally arrives! 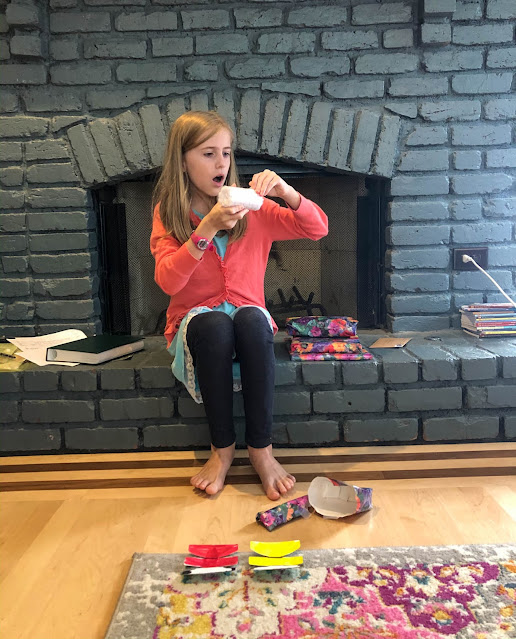 Here she is opening up her music socks: 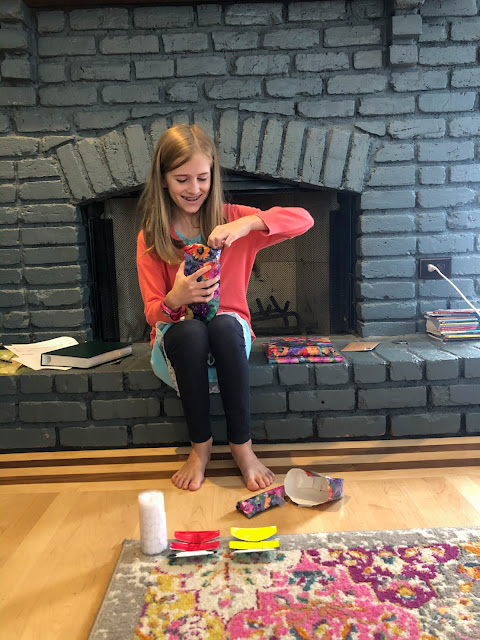 You can see her presents neatly laid out in front of her, with her discarded wrappings sitting neatly at her feet. This was the quickest and easiest post-unwrapping-presents clean up ever! 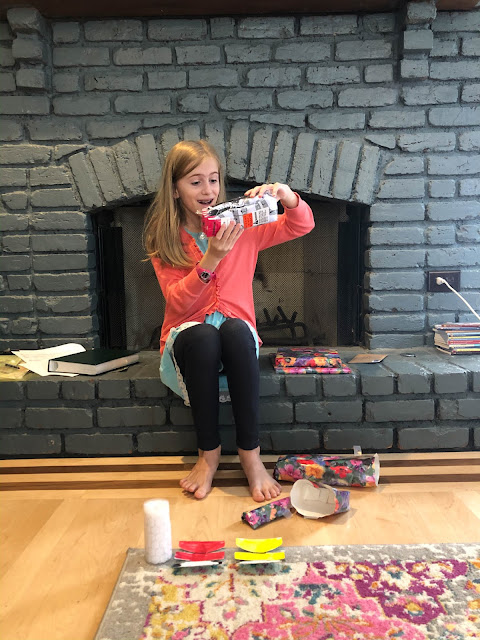 She was thrilled about the socks. I was just sad that the other half of this gift was delayed in arriving to us (it was supposed to arrive yesterday, but now we'll be lucky to get it by next week, according to the package tracking). Rachel was also thrilled about the socks. She's hopeful that now Miriam will stop borrowing her socks.
Again, just delay getting anyone anything and then when you do get them something they'll be overjoyed. Keeping expectations low is key to being a good gift-giver.
#AmIDoingThisRight?
Here's Benjamin looking over the Star Wars Origami book my sister Kelli sent for the kids to share. She's been extra sweet this year (besides the fact that she's actually a good gift-giver) and has been sending both a present for the birthday child and an activity for all the kids to do together for each of their birthdays. It's been a lifesaver during this pandemic, keeping things just a little bit more interesting for us. Maybe someday I can be like her. 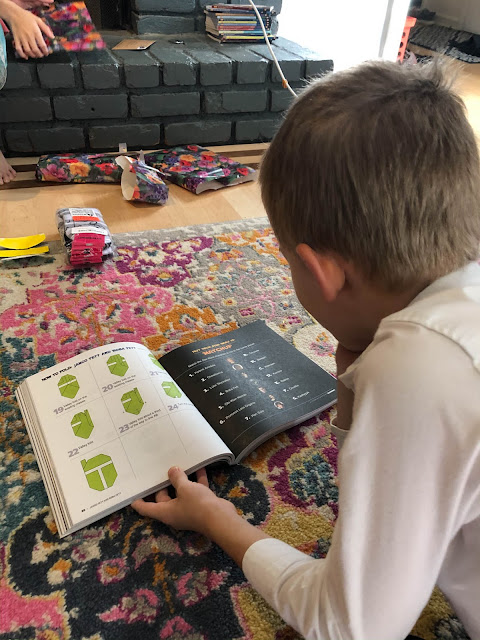 Here she is opening up the book of organ music Auntie Kelli sent for her: 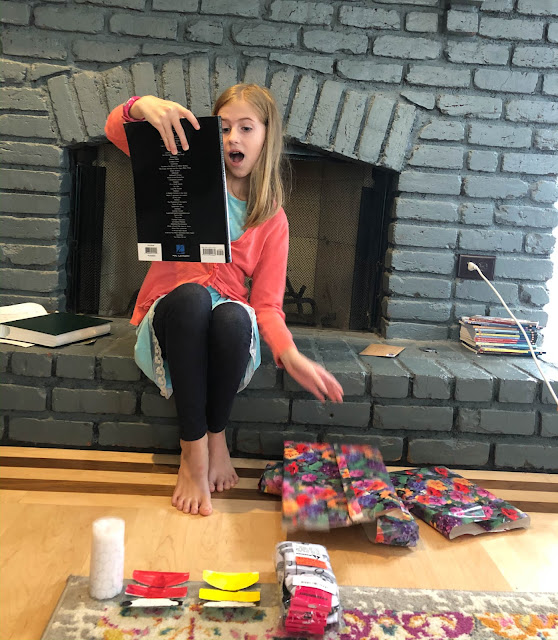 Miriam wasn't expecting much for her birthday this year, since we told her that the organ was her birthday (and Christmas (and probably her next birthday and Christmas as well)), so she was pleasantly surprised to be getting anything, but she was especially excited to have so many new organ arrangements to play with on her new-to-her organ: 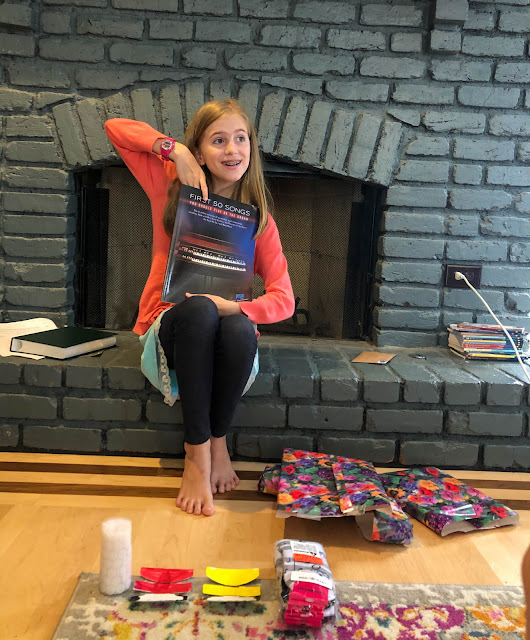 She's also excited to spend her birthday money from her grandparents. She's old enough that I don't dare spend it for her like I do for the little kids. She's much better at knowing what she wants than I am (she also has the option of just saving the money if she wants).
And that's a wrap—our "October Birthday Buddies" have had their balloons and presents documented and I've been reminded to cherish every day I have with these kiddos under my roof (because I have a feeling the next thirteen years of parenting is going to go as fast—if not faster—than the first thirteen years).
Posted by Nancy at 1:18 AM