We had a great first day back at (home)school! By the time I dragged myself out of bed in the morning the kids had all had breakfast and had cleaned up the table. Rachel and Miriam had mostly finished with their daily math section and Zoë was sitting at the table with her math workbook (Benjamin was playing Lego in the basement and Alexander, though he had had breakfast with the kids, was now with me). Further, Rachel had started a load of laundry, had put away the clean dishes and loaded all the dirty ones into the dishwasher. It was pretty remarkable!

We started reading The Little Prince by Antoine de Saint-Exupéry, which all of the children seem to being enjoying so far. They did their writing responses with little complaint and then we all finished up math (most especially Benjamin, who had to go from start to finish). Then we headed out for PE.

Rachel wanted to explore the new playground we found (since she was too cool to go out with us last week). It turns out that Monday in the early afternoon is a much less busy time for the park than Friday mid-afternoon. I even managed to park in the parking garage. 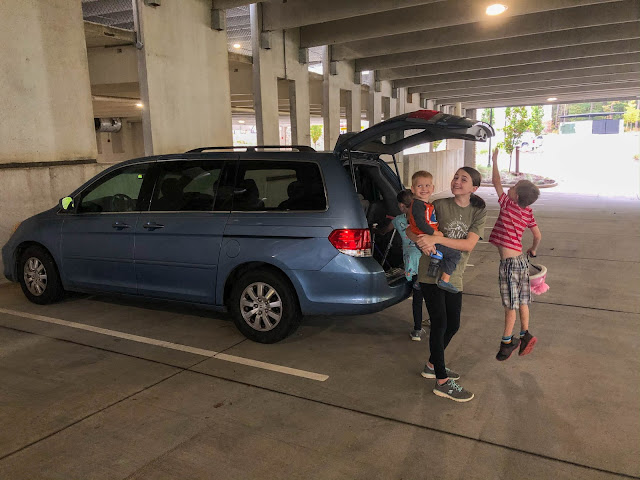 The kid-playground area was occupied, so headed over to the "Path to Fitness," where the kids had a lot of fun (and wore themselves out). 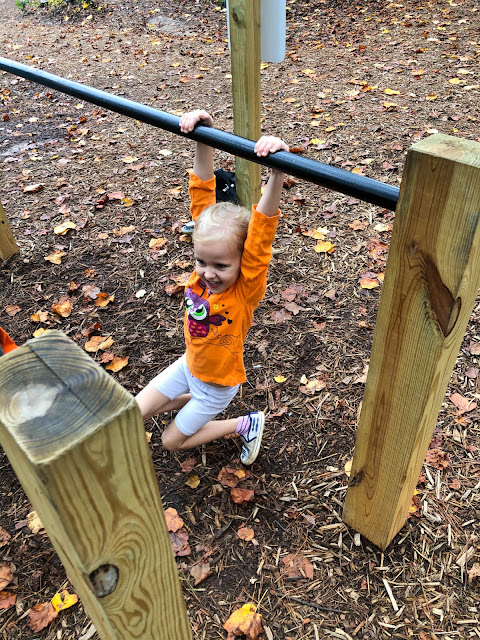 Miriam is determined to learn how to climb and worked for quite a while on the knotted rope: 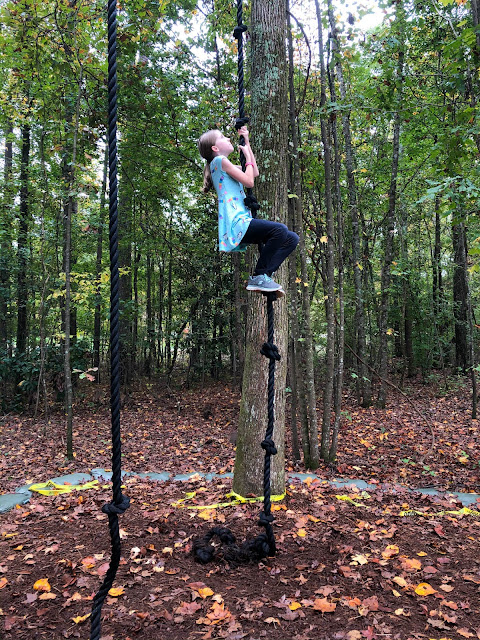 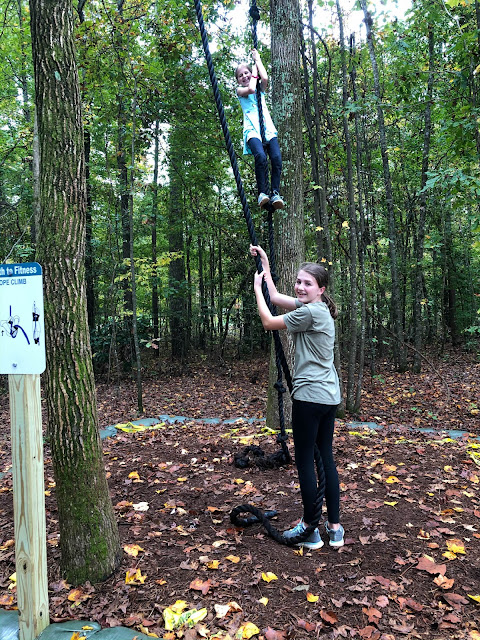 She wants to be able to climb the unknotted rope by the end of the school year—and I really think she'll get there. 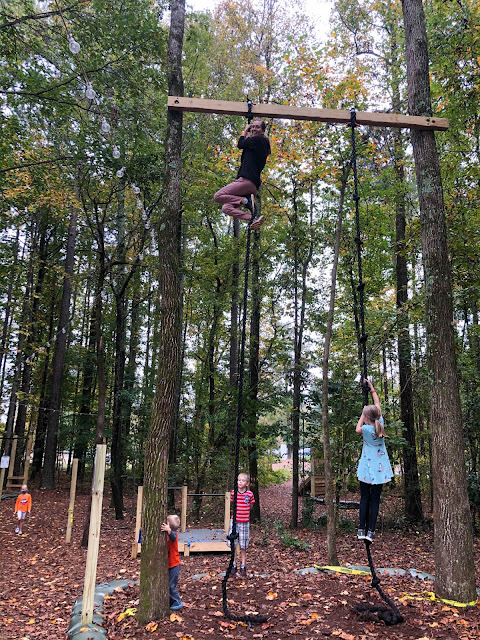 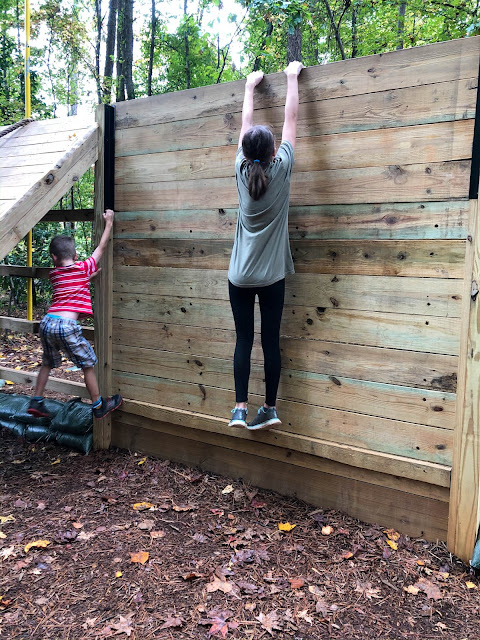 So I'm basically ready for basic training.
We did find another little family in the woods, who just happened to have a five-year-old named Parker, which our five-year-old named Zoë was very excited to learn. They immediately decided they should play together, so I called Zoë (and Alexander) over to put on their masks and I was so happy to find that by the time I looked up, the other mom had put a mask on herself and her son! So our five-year-olds (named Parker and Zoë) played on the equipment a little together, taking turns sliding down the sit-up inclines and jumping off the ladders for the monkey bars. They both seemed very respectful of each other's personal radius and were both wearing masks...but really I wish we could/would just not...interact...with...people.
So we headed over to the children's area, which seemed to have emptied out. 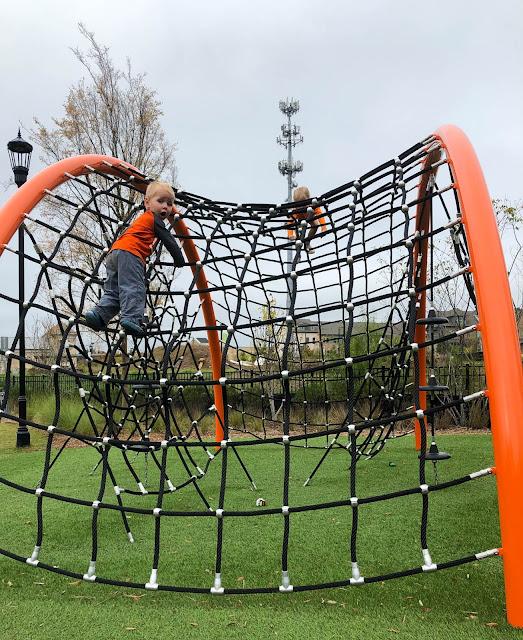 Here are the kids enjoying this crazy hexadecagon (I think it has 16 sides): 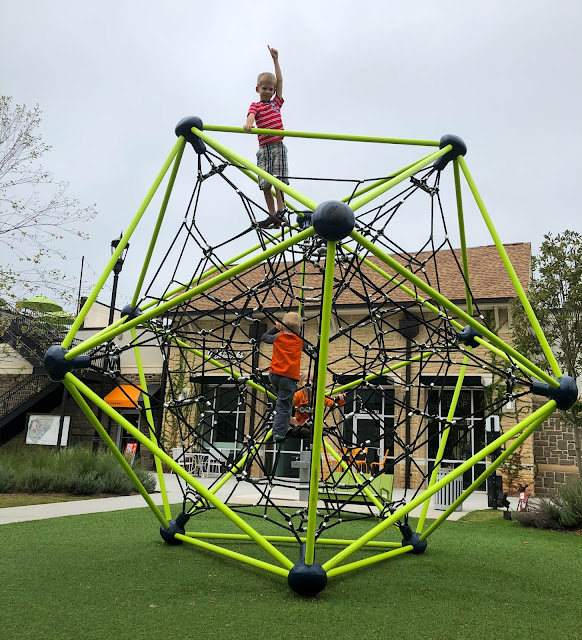 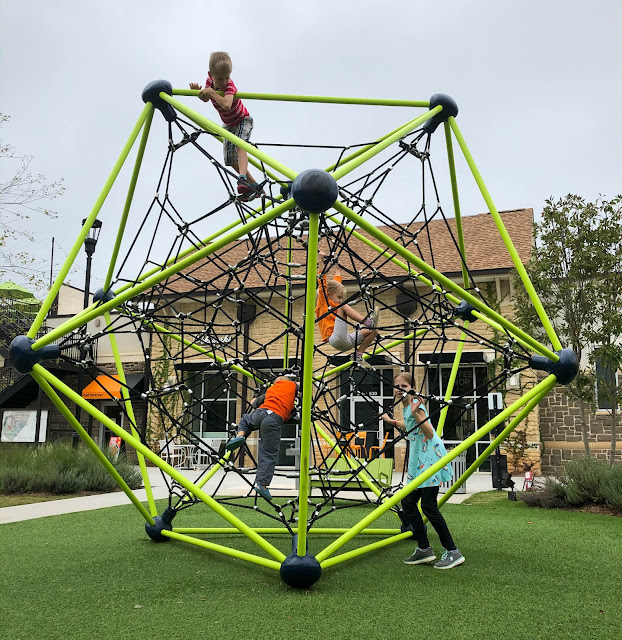 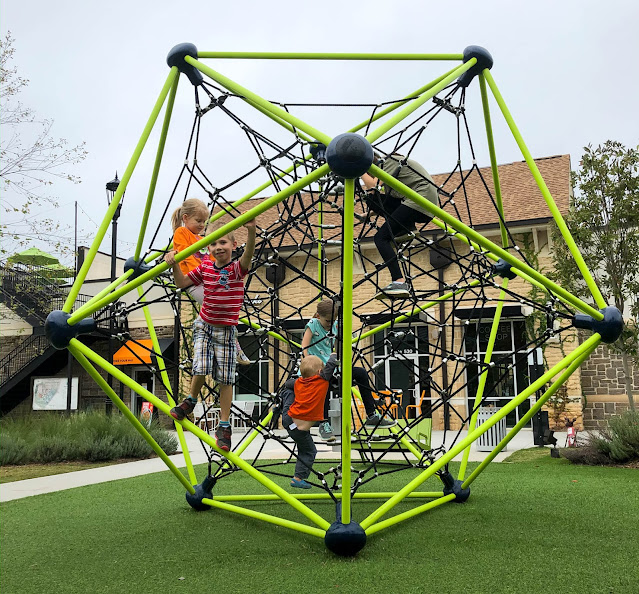 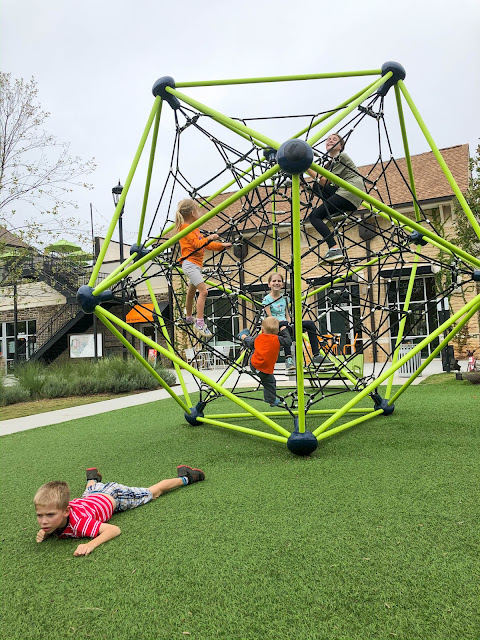 Alexander has been mimicking Benjamin more and more, which is both endearing and terrifying... 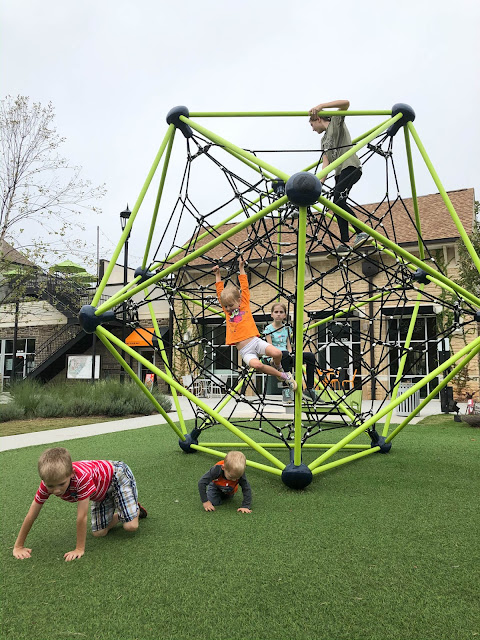 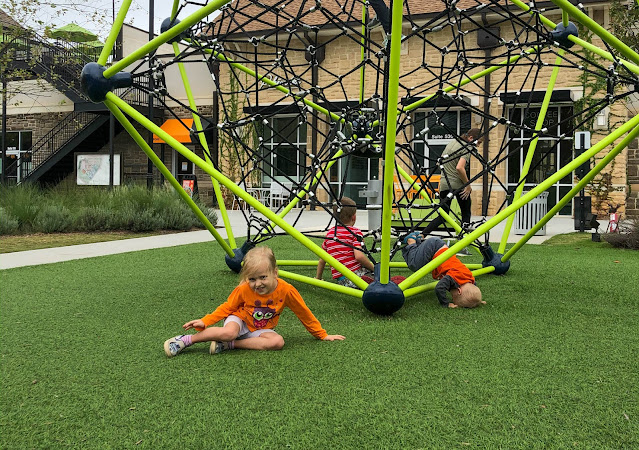 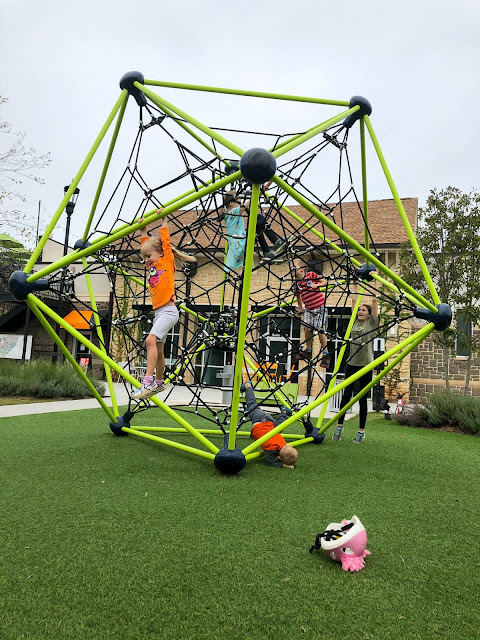 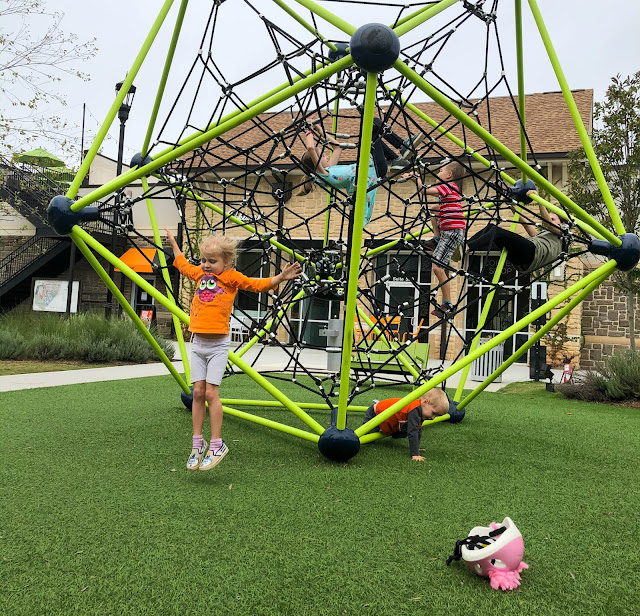 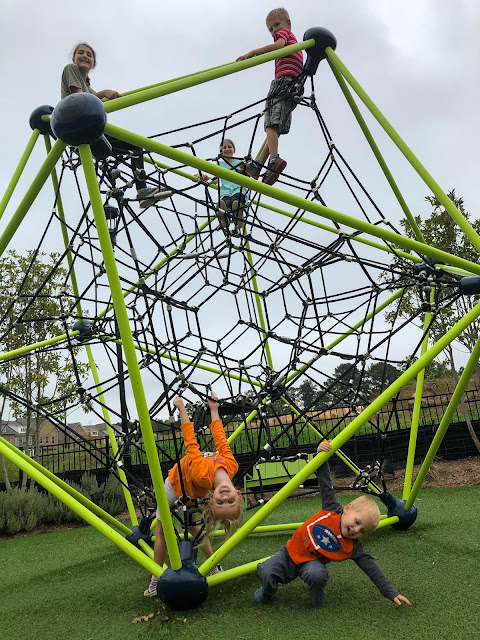 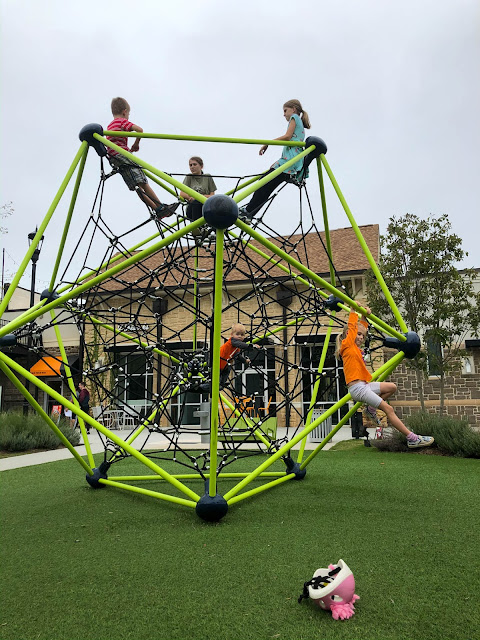 Meanwhile I was enjoying one of the lovely benches they have sprinkled around the play area. We're actually in the market for a garden bench and these particular benches are so comfortable so we did a little reconnaissance and found the logo under the seat of the benches, looked them up and...let's just say that the brand name started with an...LOL...and when we saw the price ($1500) were like, "LOL, no way!" We are in the market for a much less expensive garden bench! We'll just have to go to the park to enjoy these luxurious benches. 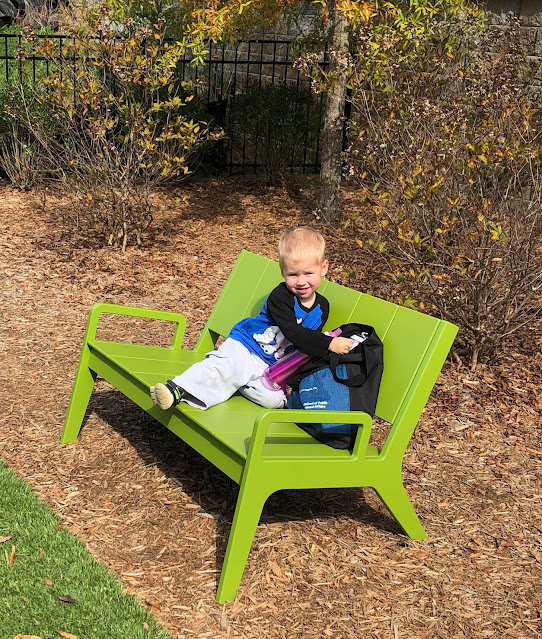 Rachel actually thinks we should measure the angles so we can DIY it. We'll see about that.
Very last, here is a picture of Alexander and Benjamin during scripture study this evening. Alexander was wearing Benjamin's hand-me-down dinosaur jammies (that we just pulled out) and he was so excited about them but also frustrated because there was a hole in the knee of one of the pant legs. He was so distracted by it (he hates having holes in his clothes) that I whispered to him to just go upstairs and find some new pyjama bottoms to wear. He came back down wearing the same pyjama pants Benjamin had on and then mimicked Benjamin's position on the floor. 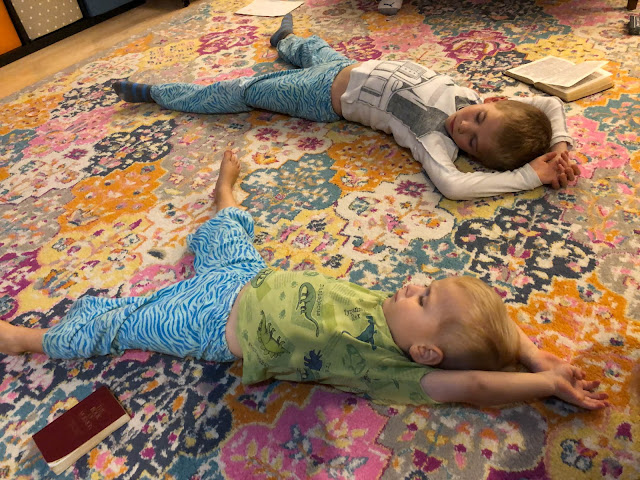