Sometimes we get a little behind schedule. For example, today is the day I finally got around to making Alexander's birthday poster. It's taken us a while to get these posters up before...but never 3.5 years! At least we'll be able to fill his frames (that have been diligently hanging (empty) on our walls for nearly two years) before his fourth birthday! 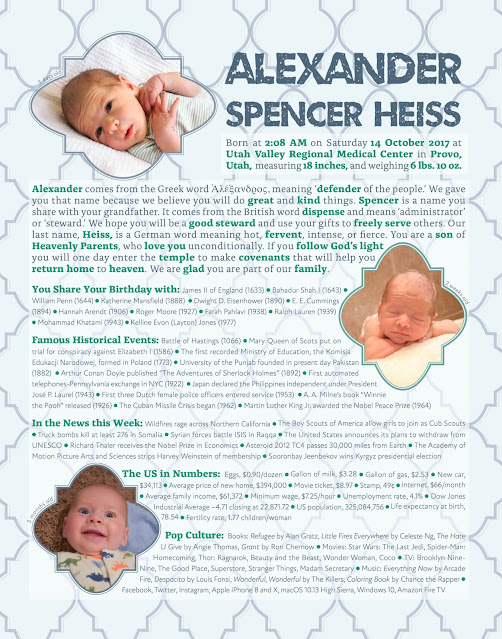 I'm not sure it's perfect, but it's done, and I've been working hard to learn that done is often better than perfect because perfect often means nothing and usually something is better than nothing. Alexander is very excited about the prospect of having something of himself on the wall next to his siblings.

There are other times, however, when we're well ahead of schedule!

Take this weekend, for example, when Grandpa suggested that we celebrate Zoë's birthday a week early. How's that for timely?!

Our family birthday celebrations don't tend to be terribly involved, but the kids were sure thrilled about having company over for a birthday. That hasn't happened in quite a long while!

Zoë, you should know, did her very best to wear all her most beautiful outfits while Grandpa was here. On her un-birthday (Saturday), I believe she went through four changes. I noticed earlier in the week that she was changing her clothes a lot (specifically that she was wearing a lot of fancy dresses for short periods of time).

"Are you trying to wear every outfit you have while Grandpa is here or something?!" I asked her (after noticing her change her clothes yet again).

"Not every outfit," she responded impishly. "Just all my best outfits!"

So, here she is opening present (emphasis on the singular because her other presents weren't ready yet) wearing a very pink ensemble, complete with a flouncy tutu: 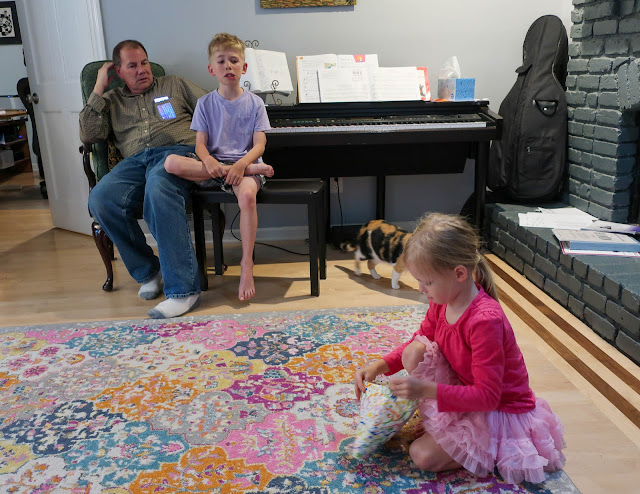 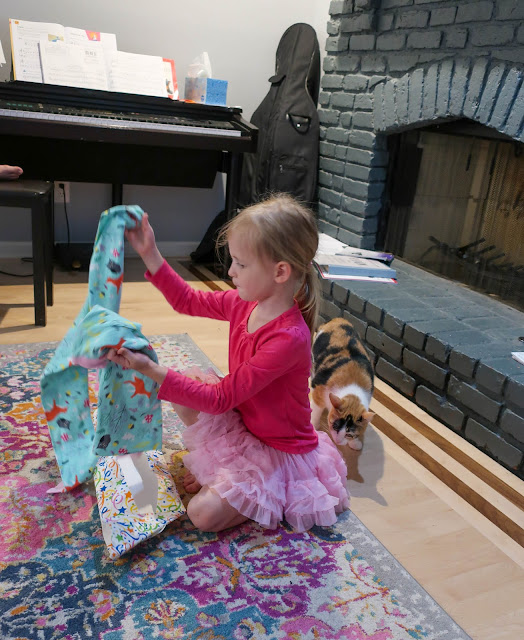 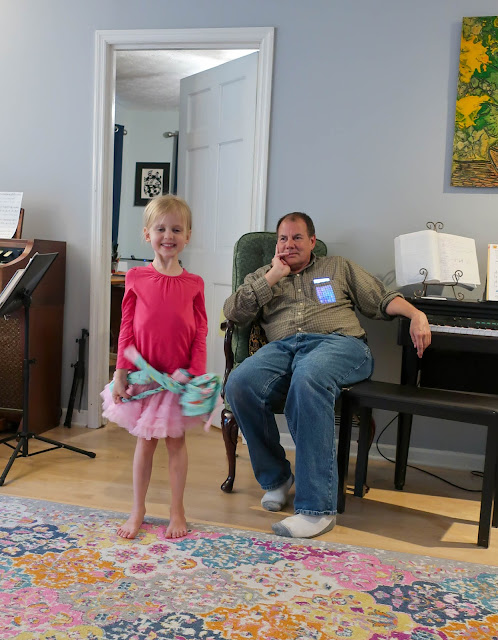 Rachel made a little fruit pizza for the occasion but had trouble getting the dough to spread through the entire pan, so left one end all jagged and then cut that end off and ate it after she baked it so she was left with a nice, straight edge. We told Zoë that she'll get a whole cake for her actual birthday. 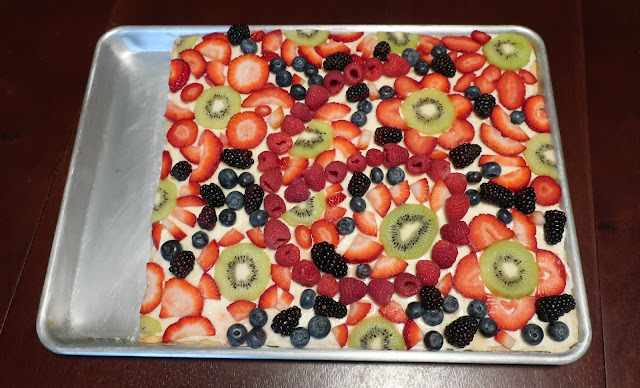 We did put six candles on her cake, sang "Happy un-Birthday to You!" and let her blow the candles out, which was good practice for her (considering she didn't manage to extinguish a single flame the first time she tried to blow them out). 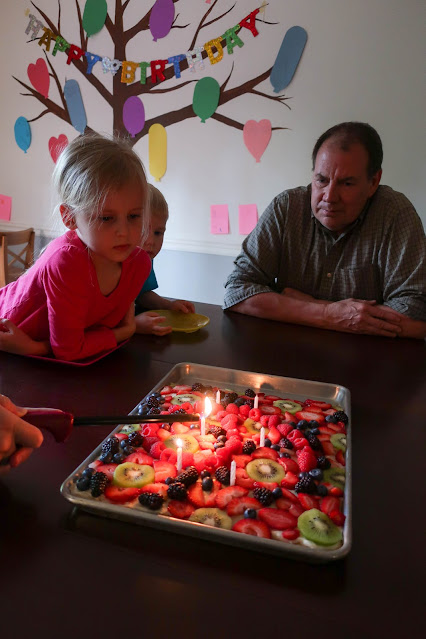 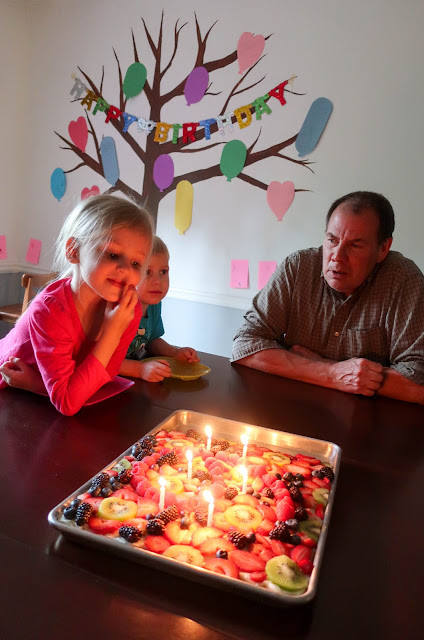 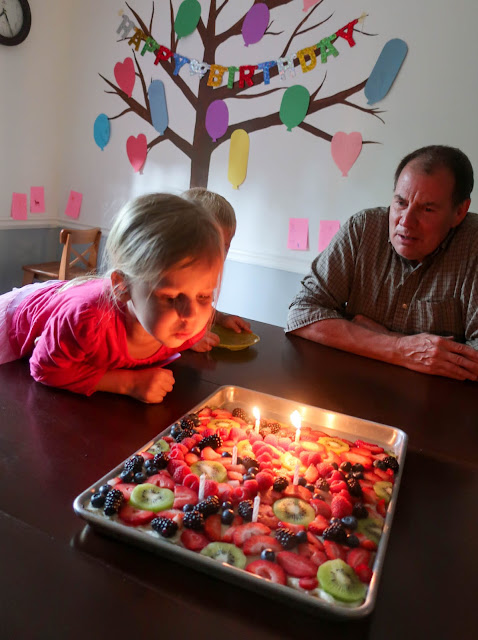 We also took some time in the morning to write on some birthday balloons for her (which I'll record on her actual birthday (which she's been counting down to since her un-birthday and is increasingly excited about)). 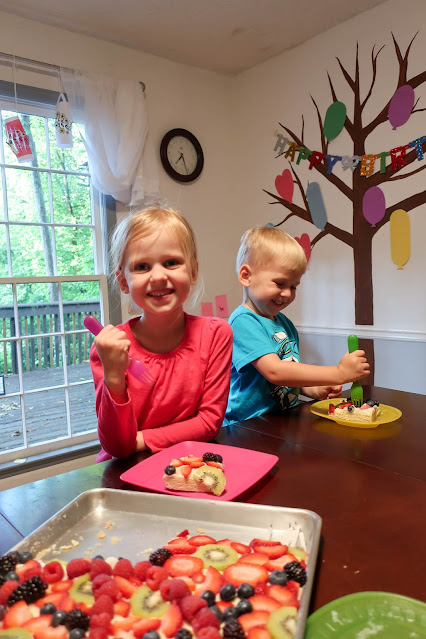 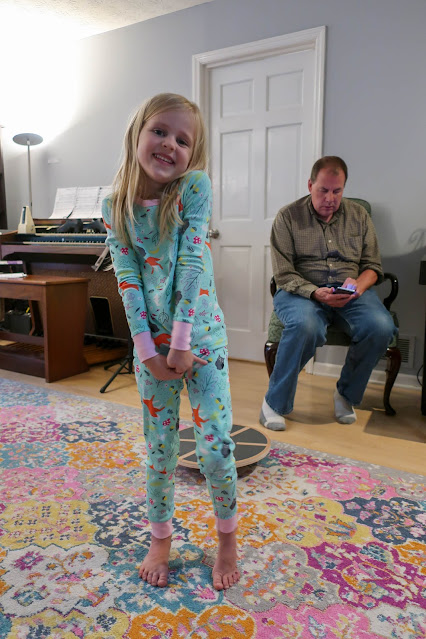