The kids have been having a Harry Potter marathon of sorts, with four of them reading the series at once. They started on April 20 and there were tears when Benjamin walked in on all three of his sisters with the first book open in their laps. I had been going to ask him to practice the piano just then, but he ran past me (sobbing), burst into his room, and slammed the door.

I followed him upstairs and knocked quietly on his door, entering only when I heard his muffled, "Come in."

He was furiously reading a copy of Harry Potter in his bed.

"I CAN'T BELIEVE THEY DIDN'T TELL ME WE WERE STARTING!!" he cried. "I have to catch up! I have to win! They're all a bunch of cheaters!"

I let him have some calming-down reading time and then his sisters clarified that this marathon was more of a journey than a race. Rachel and Miriam had decided they wanted to read it along with Zoë, who is reading it through for the first time by herself, and Benjamin decided he wanted to tag along on this journey as well (mistaking it for a competition). He's definitely winning because Zoë is reading at her own pace and Rachel and Miriam are managing quite a few other side projects, while Benjamin is plowing through at break neck speed.

He wants to beat his last record for reading through the series (which is something like eight months, he told me) and considering he's already on book five or six, I think he'll definitely achieve a new personal record in this department.

Here are Benjamin, Rachel, and Zoë reading in the music room (without being mad at each other): 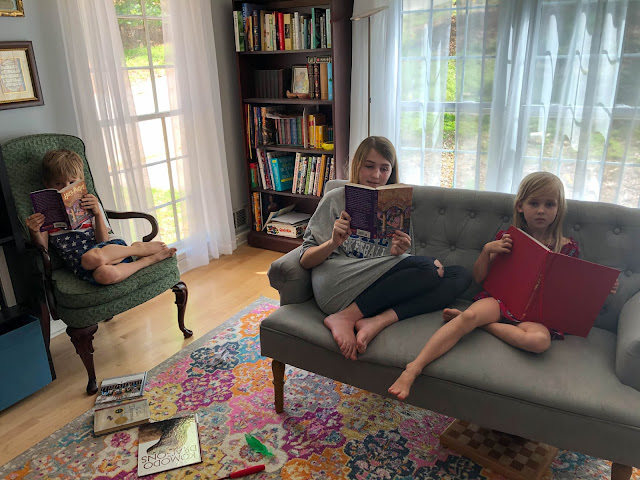 Zoë's reading the big illustrated version of the book, while the other kids are reading paperbacks. We have a few sets (some of which are more...fall-apart-y...than others). Anyway, Zoë finished reading the first book today so we celebrated by watching the first movie together as a family this evening and it was very entertaining. This was Zoë's first time watching a movie after reading a book and she was eagerly spilling spoilers and making comparisons the whole time. She's seen the movie in the past, and I've read her the book in the past, but this was like a whole new immersive experience for her.

I wouldn't say it's been a whole new immersive experience for Benjamin, but it's certainly been an emotional experience for him to read through the series so quickly.

On Friday morning he tromped into my room so I did what any homeschooling mother would do and I said, "What's up? Are you ready for another test section?"

Instead of answering he collapsed facedown on my bed.

"No!" he moaned into the mattress.

And I get that. I mean, we did read Bridge to Terabithia this year and I 100% knew Leslie was going to die but—man!—if I wasn't just bawling my eyes out through that entire part of the book! Anyway, we got him cheered up and then he took his last two test sections and ended up scoring remarkably well (so way to go, Benjamin)!

"And you just keep on loving her," I said.

She'll find out eventually. I've only read the first three books out loud to her (that's about my limit for how much Harry Potter I can read out loud before I tell the kids they'll just have to read the rest of the series by themselves) and I'm not sure how far she'll get in the series this read-around, but she's in for some surprises, that's for sure!