I took Benjamin to the library today—his first time being in any public building (other than the dentist's and doctor's offices) since last March. And maybe I shouldn't have taken him, but it was a pretty low-contact trip. He needed to do some browsing so he could choose something to read because I just haven't been choosing books that suit his "vibe" lately. Plus, it's been raining non-stop for two days and (a) that child needed to get out of the house and (b) everyone else needed that child to get out of the house. So, to the library it was!

I warned him that we wouldn't be able to just waltz on in, that we'd have to stop for a temperature check first, but it seems like they abandoned that practice sometime between my last visit and this one. Here's Benjamin in the stacks looking for books that Alexander might like: 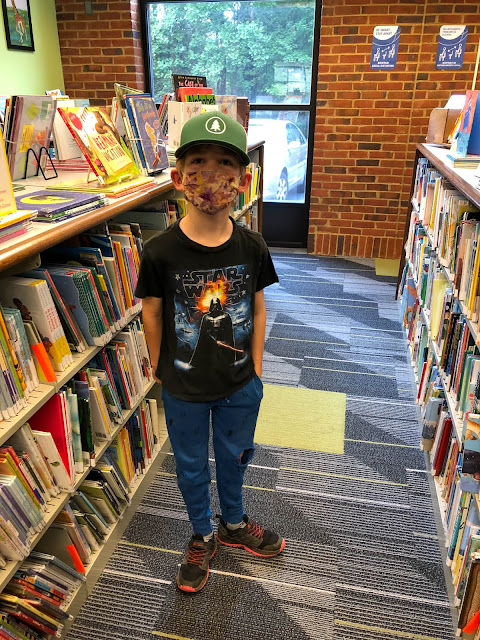 For himself he ended up picking out some Minecraft books as well as some dragon series. Hopefully that will keep him busy for a while. Our trip really went off without a hitch until I...hit the limit on my card.
I should be happy. Last summer (I think it was?) they sent out a survey asking how they could improve their service and I submitted an essay about the limit on the number of items a person was allowed to check out on their card (40!) and how that was unreasonable for homeschooling mom of five whose children devour books like candy. Now, the logical solution is to simply have everyone use their own cards, right? Because 40 x 7 = 280 and that is a lot of books! But that's a headache for the household manager, isn't it? Having to log in to seven different accounts just to make sure we've got all the books on our list. And, I reasoned, if my family was allowed to take home 280 books each trip anyway, what harm would it do to simply allow us to check out more books on a single card? Because we're rather unlikely to haul 280 books out of the library... I can usually only handle 50 or so!
Plus they are super slow at checking books back in so when I come back to the library with fifty books in tow and then try to check out fifty books...I still find myself running into trouble with card limits. Not as often as I used to (because our library use has decreased during the pandemic) but it still happens.
It happened today.
I was checking out books and mentally trying to figure out when we'd hit our limit and we just...kept not hitting it so just as I said, "Cool! They must have returned our books already..." our account maxed out.
I pondered what to do.
Do I pull out a different card and put the books on there? But then...see the hassle about checking various accounts (it's a real hassle; like, my phone can only link to one account (annoying)). I decided I'd bravely, kindly implore the librarian to override the limit.
I know they can do this because they did it for me when they were doing curb-side pick-up only.
"Oh, you seem to have hit your limit. Did you return any books today?"
"I certainly did!"
"How many?"
"See these bags that I'm filling up with books? They were full when I arrived. So I returned three bags full of books."
"Oh, then I'll just override this. No problem."
But not today! Today it was...
"Excuse me, hi! I'm just trying to check out the last of these books for my kids but my card has maxed out. I returned two bags full of books when I arrived, so I know that I will be under the limit once those are checked in, but..."
"How many books do you have left to check out?"
"Well, nine."
"Nine?! I don't think so. We might do one or two, but not nine."
"Okay, but, see these ten books that are due tomorrow? I definitely returned those ten titles today. Plus many others! I have no overdue fees and I promise..."
"It's against policy but I'll check in the back."
Five minutes later...
"Yeah, someone's checking in books now. So you can wait for them to check in your items if you want."
And so we sat. On the ground (because the furniture is all taped off for "safety"). And waited. For forty-five minutes. Until they managed to check in eight of our items (I made Benjamin put one of his books back because it was a Christmas book and because I didn't want to wait until they managed to check in another item for us).
Somehow us loitering in the lobby (on the floor) was better than simply overriding a no-risk account (as I said, I had no unpaid fines (and haven't ever had a fine to pay (to date (I'm super controlling over library books))).
They would not finish checking in all of our items until 2:00 that afternoon (we got to the library at 11:00 in the morning).
So, they're slow at returning books. I know this. And they keep telling me to just bring my books in and ask that the person at the front desk stand check them in when we arrive (rather than using the book drop) but that seems super forward and demanding and I've never seen anyone do it and it totally doesn't seem like a thing that would be well-received. But I'll try it next time we go and see how it goes down. Maybe it will work out better than I think. Maybe.
Anyway, Benjamin and I brought home our bounty, which all the kids were happy to dive into (except for Miriam who disappeared downstairs for some reason).
Here's Benjamin with some of his Minecraft books: 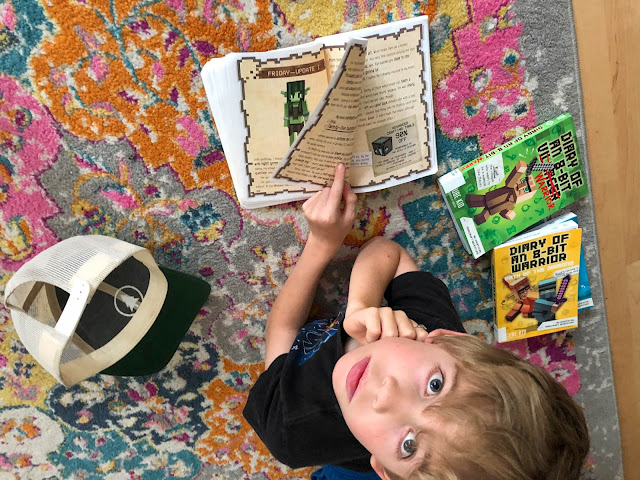 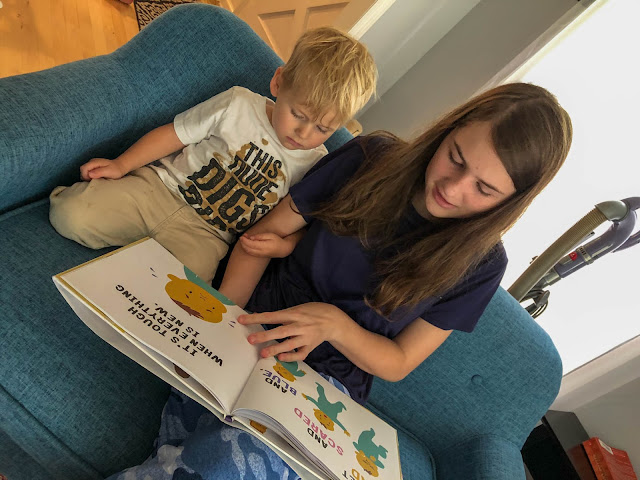 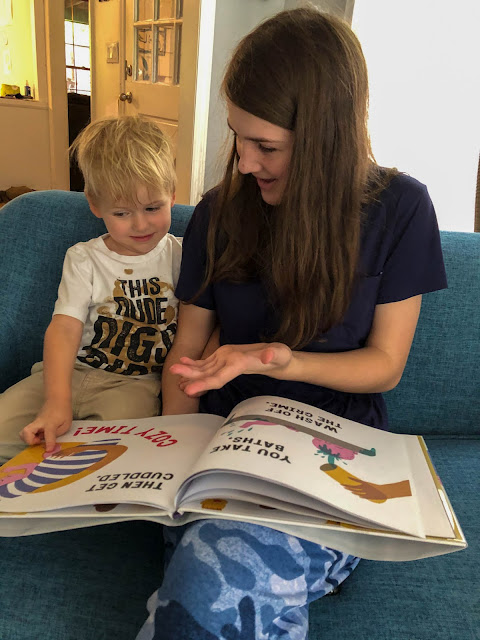 And here's Zoë reading some "Phoebe and Her Unicorn" books: 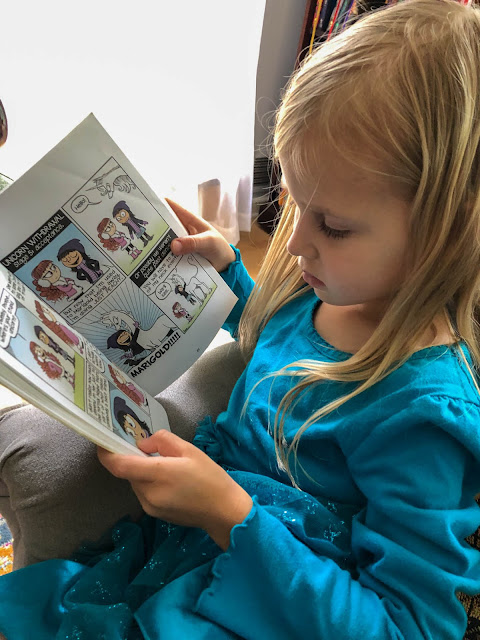 She could read these over and over. This particular volume she liked because there was this one scene where the unicorn compliments Phoebe's name saying something like, "That's a beautiful name!" to which Phoebe responds, "Thanks. I think so too but people mispronounce it a lot!"
Zoë cracked up laughing and came to read that part to me. It was so funny, you see, because when Zoë was first getting into this series she kept saying, "Pho-ebb," and even though all the older readers in the house assured her it was, well, Phoebe (fee-bee), she stubbornly insisted her pronunciation (foe-ebb) was correct. I think we had to Google the pronunciation to convince her that we weren't just pulling her leg, sweet thing!
Those Greek names are hard!
Persephone (obviously pronounced "purse-phone"), Hermes (which our kids used to pronounce "herms"), Aphrodite ("afro-dight")...we've had a lot of fun mispronunciations of Greek names at our house!
I also got a new series for Zoë to try called Zoey and Sassafras, which looks fun.
New reading material is always a good way to break up a rainy week!
Posted by Nancy at 12:55 AM