It's always fun when Grandpa comes!

Grandpa promised the kids that once he was fully vaccinated he'd come out to visit them; they've been looking forward to "May" for weeks upon weeks for this very reason! Well, Grandpa's fully vaccinated now (as is Daddy, and I just had my second shot this morning so I'm two weeks away from being considered fully vaccinated myself) and his plane touched down on Saturday the 8th.

Alexander and Zoë were so excited that they set out "Grandpa outfits" on their floor the night before so that they could be sure to look extra wonderful when Grandpa arrived. Then they—along with Benjamin—slept on their bedroom floor because they were too excited for beds. 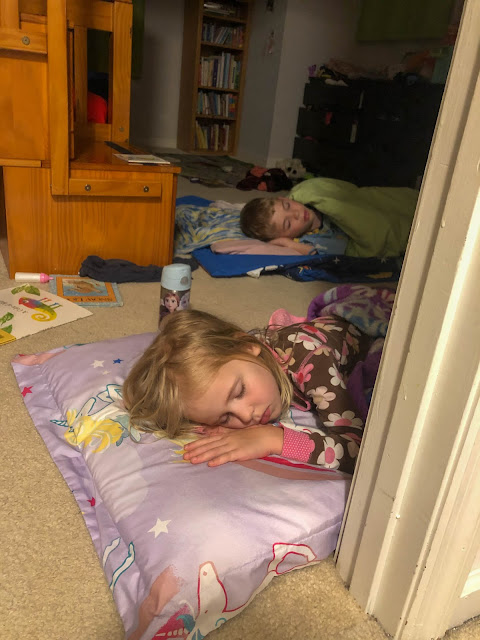 Alexander wasn't shy at all and hardly left Grandpa's arms at all on Saturday. He just sat with Grandpa and stroked his face and squished his cheeks and was just so happy to have his grandpa back. He even ceremoniously kissed Grandpa's nose (which I guess is something that he told Zoë he was going to do when he saw Grandpa (as I said, they've been planning this for weeks)). 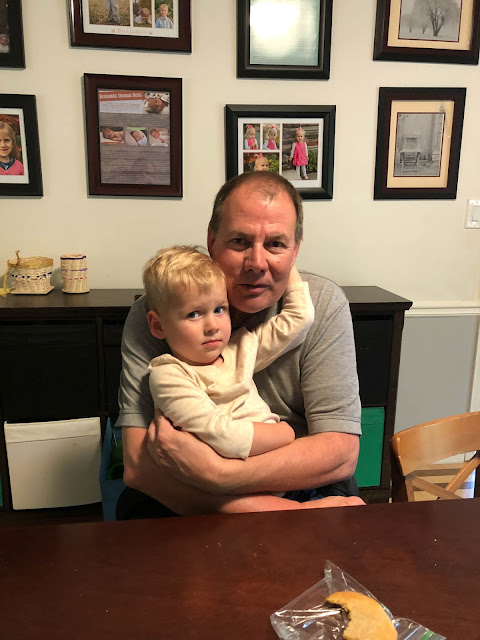 Here's Alexander getting some more snuggles in a different room: 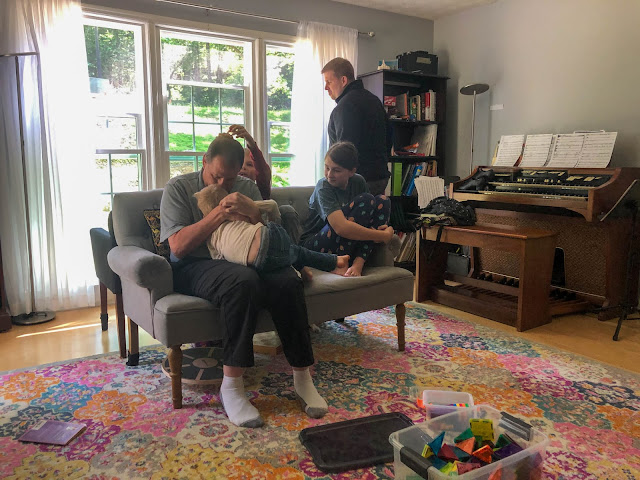 Grandpa told us to pick out a "big ticket" item for the kids, coordinated with his arrival, so here's our new climbing dome, courtesy of Grandpa: 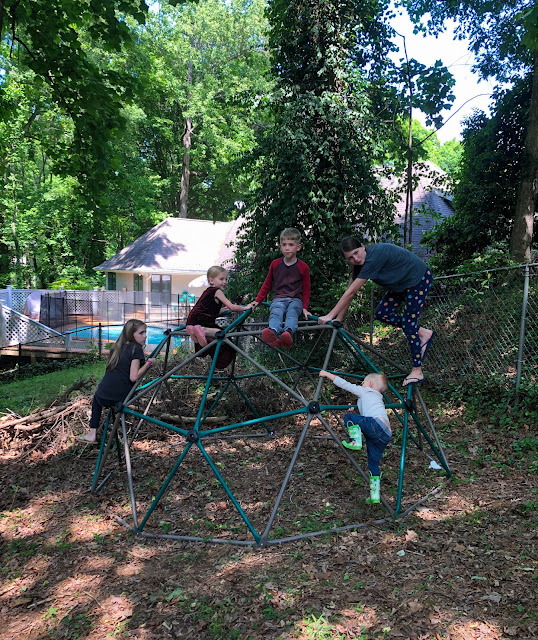 We set finished setting it up on Saturday morning just before going to pick Grandpa up and the kids have been loving it so far (though Alexander finds it frustrating because he hasn't quite figured out how to climb it yet). I think it will be nice to have going forward (sometimes it's hard to get enough PE time in (in my opinion) so having fun things to do around the yard helps; Benjamin still wants us to get a slack-line ninja course, so we'll have to see about that (sometimes it's hard to find enough ways for that child to get out his energy (in my opinion)). 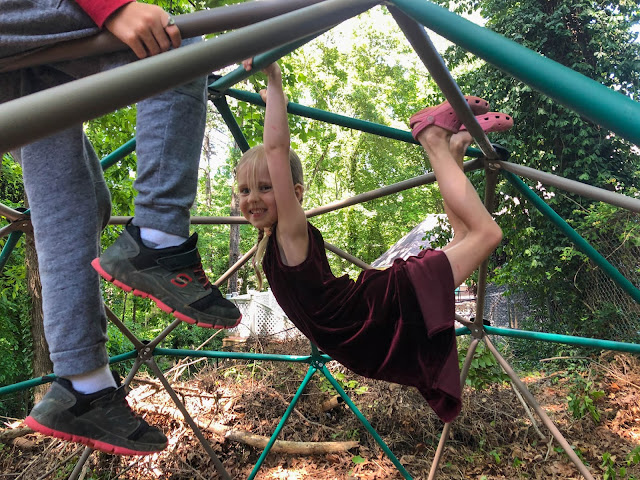 We didn't do much on Saturday or Sunday, aside from a few walks and busy church meetings (Benjamin gave a talk in primary, Zoë gave the opening prayer in primary, Miriam helped teach the lesson in the YW class, and the primary kids sang for Mother's Day). We showed Grandpa around Pinckeneyville on Sunday evening.
Here he is ushering a snake off the bike path (not a venomous one): 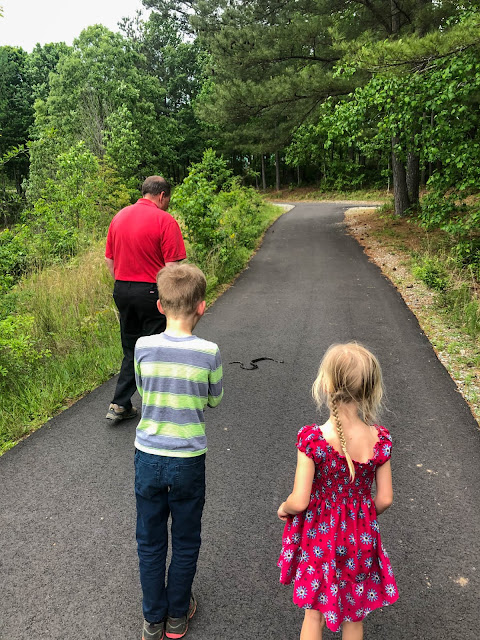 I believe it's just an Eastern Kingsnake: 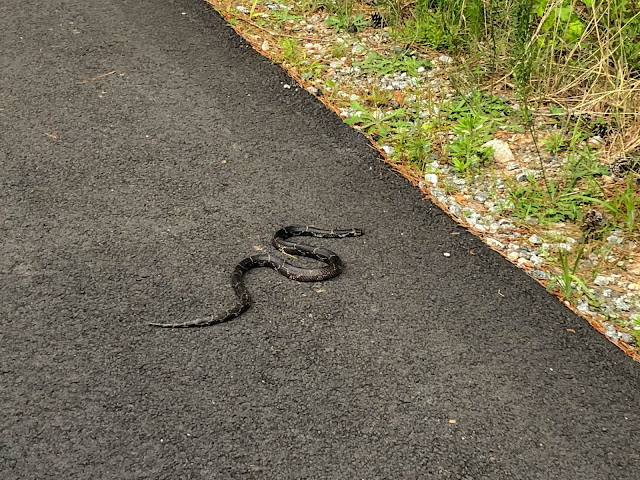 We stopped to play at various playgrounds, after giving up our original location to some newcomers. Alexander is very much a "pandemic baby." When a couple of little kids arrived at the park he ran over to me and asked if we could leave because other people were here now. I said that it wasn't too crowded and that they'd probably be fine if they kept their distance (the "strange" children were playing on the teeter-totter while our kids were playing on the big playground structure).
Alexander collapsed in front of me in the grass and whined, "Did you at least bring masks?"
So I gave him a mask to wear and then he made each of his siblings come get a mask for me (I can't be the only mom who keeps a stash of masks in her purse, right?)
It was rather cute. He takes coronavirus very seriously, though I think the minute we tell him "it's over" he'll re-socialize very quickly.
Anyway, eventually for real too many people arrived at the playground for our comfort so we hit the trails (which is where we found the snake). Here are some snake-free pictures of Grandpa walking with the kids: 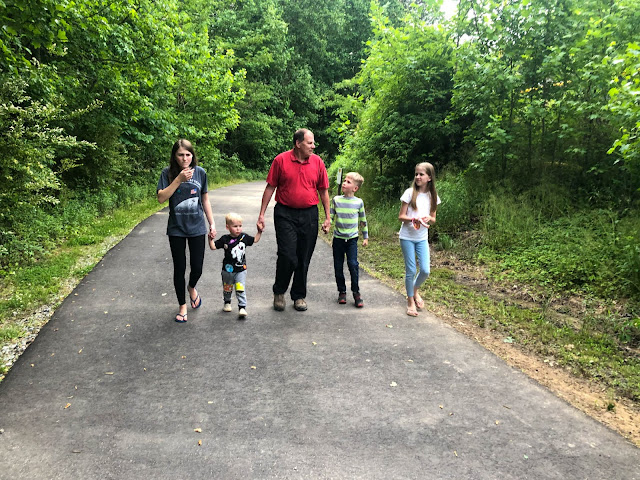 Every time I looked back at them they were in a different formation (I think the three little ones kept vying for Grandpa's hands so there was a lot of place switching). 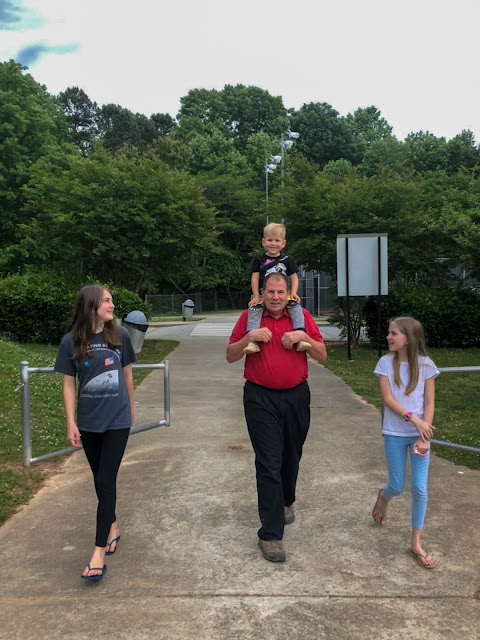 While the kids played at an empty playground, the grown ups got to have a good chat, interrupted only by calls from Alexander (who is a little too little to join in all the reindeer games) to take his picture (and, later, to take him potty). 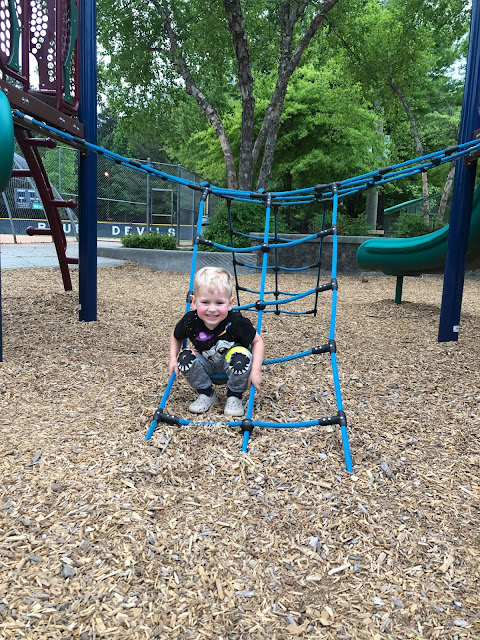 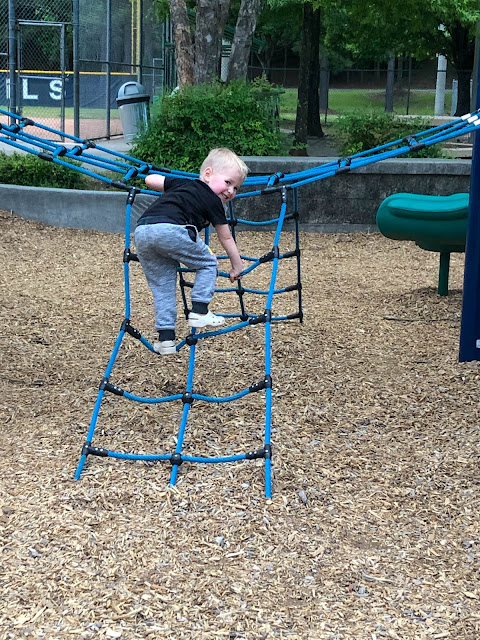 We had hoped to spend a lot of time bike riding and swimming, but the forecast for this week is a little cold and rainy so we'll have to see what we manage to squeeze in between storms.
Posted by Nancy at 5:16 PM