It's our last week of the school year! Initially I told the kids that we would just hang out at the pool all day (since we've completely run out of curriculum and the kids aren't ready to dive into next year quite yet), but we had a huge storm system move through today and it was...dark and stormy...all day. It was pouring rain for hours upon hours. Thunder, lightning, the whole nine yards. We couldn't even safely go outside to splash in the puddles.

So instead we tried our hands at basket weaving.

We ordered this kit a while ago (around Easter) but it's just been sitting around waiting for Mommy to feel patient enough to get into it. I turned in my final paper last night and woke up this morning feeling quite a bit more patient than I have in several weeks (correlation or causation?) and since we needed to eat up our day with something I thought it would be a good day for basket weaving.

I should mention that I ordered a kit that came with four bases, which is clearly one too few bases for the number of children in our family. I can't remember how I rationalized this at the time of purchase. Did I think to myself obviously not all the children are capable of weaving a basket so they'll be happy to share with each other! That sounds a little naive... Or did I think that the kit came with five bases? Or did I figure we'd be industrious enough to make another base by ourselves? I don't know what I was thinking, but when the kids pointed out there were only four bases...but five children...I said, "Well, that's because basket weaving is only part of today's educational journey. The first part is a battle to the death. Survivors get to make a basket. Losers..."

So we had to explain that we weren't actually going to have a battle to the death over basket weaving supplies. We were going to share with and help each other. Because evidently that needed to be explained (because the three-year-old weirdly doesn't pick up on sarcasm yet).

One day...when that knife is not so closely guarded...it will disappear.

The other day we were getting ready to go for a family walk and Alexander did not want to ride in the stroller, so he brought that fake knife outside and when I pushed the (empty) stroller up the driveway he charged at me with the knife, yelling, "I'M WALKING TODAY OR I'M GOING TO POKE YOU WITH MY VERY SHARP KNIFE!"

So we made him walk the entire mile loop and he was a very sad, very tired boy by the time he was climbing the last hill (we live in a very hilly area) and he (hopefully) learned that there are reasons Mom and Dad take the stroller with us on the walk (even if we don't make him sit in it the whole time). We've also had several discussions about not threatening people with knives (even fake ones).

It's the strangest obsession of his because he's otherwise the sweetest little guy. But that knife is going to disappear sometime very soon, I swear.

We had four basket bases. Benjamin got first pick since I really ordered the kit for him since he's been begging for a basket to put on his bike. Then Rachel picked one to help Zoë do (the smallest one, which Zoë cried and cried about until she realized that basket weaving wasn't as easy as she thought and then she was glad she got the smallest base), Miriam made a basket under Alexander's direction, and then later in the day Rachel started working on the very last basket for herself (she's not quite finished yet).

It was a long day's work and our finished projects ended up a little...whimsical...but that's okay for our first try! I'm sure we'll be repeating this project (because silly me didn't get enough supplies the first time).

Here's Miriam working with Alexander (you can see his beloved knife in the bottom lefthand corner): 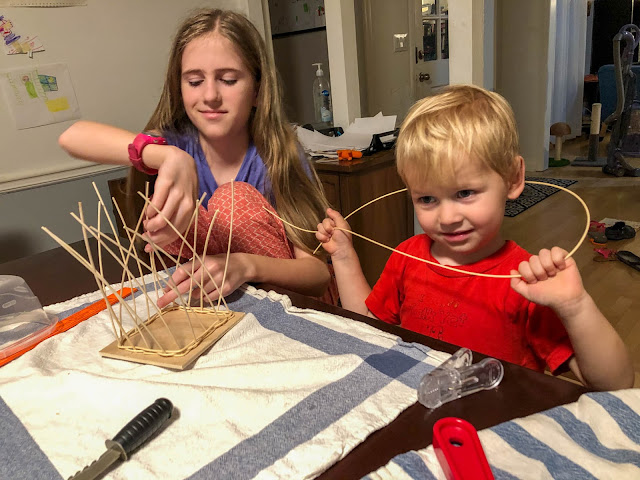 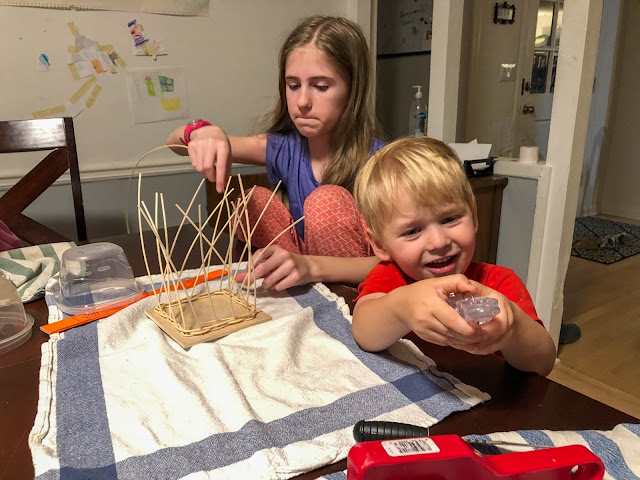 And here's Benjamin (you can see how terribly stormy it was outside; that's how light it was...at 11:15 AM): 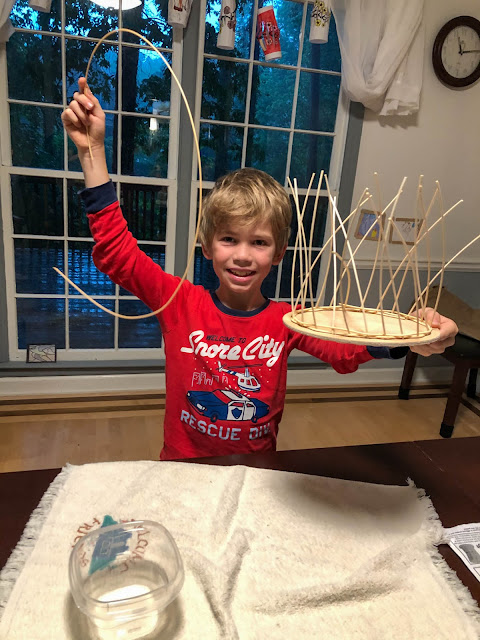 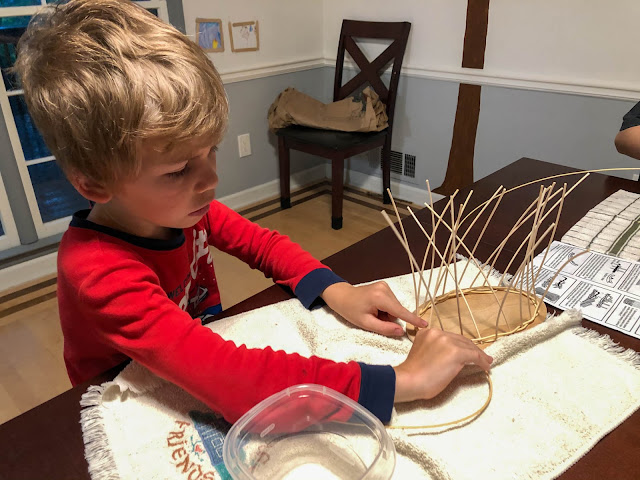 And here's Rachel and Zoë working together: 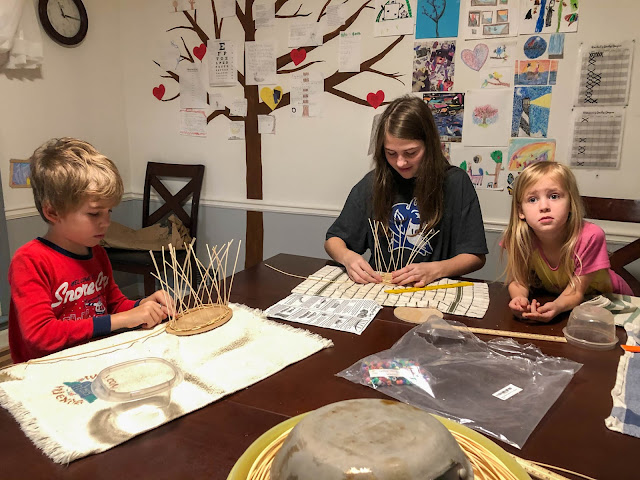 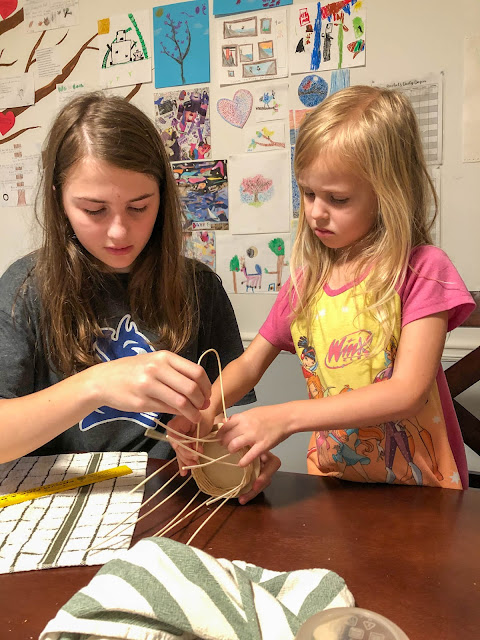 I'll have to get some pictures of our finished projects tomorrow (it's supposed to storm most of the day again). I thought I would take beautiful, cheery pictures of everyone working happily and making great progress on their baskets, but instead I only took a few pictures at the very beginning and then spent all my time cutting lengths of "weaver" for the kids and helping them trouble shoot. It was a little more involved than I thought it would be (so I'm glad I waited until I had no deadlines hanging over my head).

One of the reasons Rachel was bummed about having to move away from North Carolina is that in grade five, Ms. Moo (the art teacher at the kids' school) would do a basket weaving project with each class. They worked on basic weaving skills in grade four (with yarn and things) but making a basket was something the kids at Easley all look forward to from kindergarten. So Rachel was rather upset to miss out on experiencing that.

And apparently the art teacher at Sierra Bonita was super grumpy and never did anything fun with the kids.

So Rachel was super excited about today's project (and I think all the other kids were, too, after they got over the initial disappointment of not having a gladiator battle in our living room)!