There's a lizard in the hallway!

The other day I opened the front door to retrieve a package from the front step and a lizard must have taken that opportunity to dart inside the house because soon after I closed the door I heard Alexander hollering, "There's a lizard in the hallway!"

"What?" Zoë yelled and then her shrieks joined Alexander's hollers. "There's a lizard in the hallway!"

And then Benjamin began bellowing along with them: "There's a lizard in the hallway!"

So apparently there was a lizard in the hallway.

It cornered itself in the pantry and I trapped it under an old Cool Whip container and then we worked a thin piece of cardboard under it, just like we'd do for a bug (though for bugs we often just use paper). I carried it outside and put it in a bucket for the kids to observe for a little while before we set it loose. 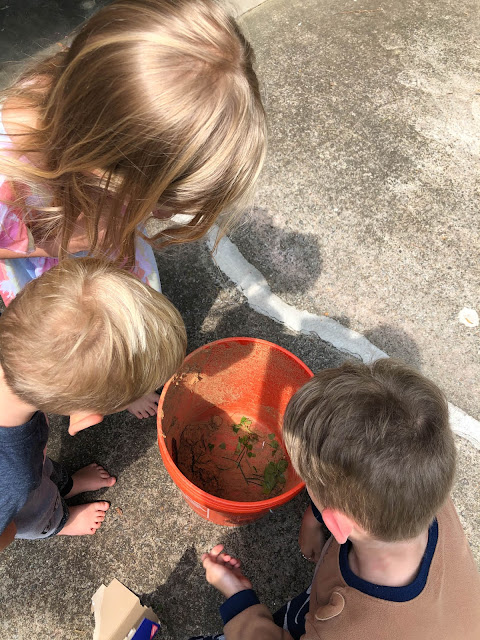 I'm not quite sure what kind of lizard it was, but it was some sort of a skink (either a five-lined skink or a broadhead skink), so I told the kids, "It's some sort of skink."
"He does not 'tink!" Alexander told me, rather offended. "I named him 'Guishy and he 'mells good! Don't you 'Guishy?"
I don't think we ever succeeded in convincing Alexander that there's an entire family of lizards known as skinks because he thought we were saying "stink" the whole time.
Benjamin did his best to try to pick up the skink, but it was so skittish that he gave up and let it go (which, honestly, is probably for the best). 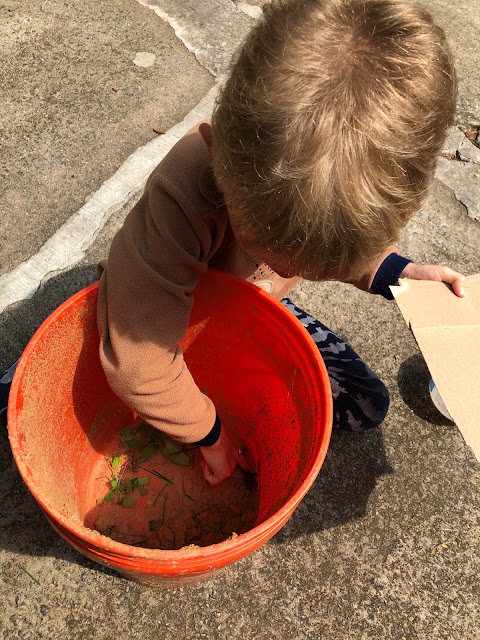