The Garbage Can Incident

Late Thursday night, Andrew put out the garbage can. We had two garbage days while we were there. Spoiled, I know.

The roads on the coastline are rather small. Mission Boulevard is really decently wide, but not when there are cars lining both sides of the street and an island in the middle. The side streets though, are just teeny tiny! Some of the "streets" leading to the boardwalk were nothing more than a walkway, yet people seemed to get their cars down them somehow.

I was never really sure what was considered a street or a walkway. The walkways were labeled with the same signs that the streets were. I suppose the rule of thumb would be that if you can fit a car on it, it's a street.

Anyway, on Monday Jacob put out the garbage can on Mission Boulevard. It got emptied, so we figured that was the right place for it.

On Thursday, Andrew went out and put the garbage can on Mission Boulevard, but there was a car parked really close to the corner of the sidewalk and the street at the front of the house. 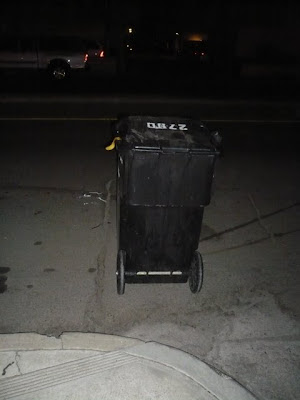 "Someone's going to hit that," Andrew thought to himself, but he left the can there anyway and came back inside the house to play games with everyone.

An hour or so later, we were all laughing and having a good time playing Phase 10 when we heard a loud crash. At first we weren't too alarmed. Keep in mind that we were surrounded on three sides by streets--and with very little yard there wasn't much space to separate the condo from the street. We were very used to hearing car doors slam, skateboards clunk over the sidewalk lines, people walking by in very loud voices, and so forth.

What alarmed us was Andrew. The minute he heard the crash he turned bright red and lowered his head.

"What was that?" we heard a voice scream from outside.

Someone muffled a response.

We all turned to look at Andrew. He had fanned out his cards and was trying to hide his face behind them.

"I think they hit the garbage can," Andrew said, suggesting the obvious.

The people who hit our can sounded very upset. We could hear them turning it upright and shoveling garbage back inside.

We tried to be sympathetic, but mostly we were laughing uncontrollably.

"Shhhh!" we kept hissing at each other.

We had Jacob close and lock the door--not that it would have dissuaded them much if they had wanted a confrontation since the number of our condo, 2780, was emblazoned on the garbage can--then we hunkered down, and tried to continue on with our game, until we heard them leave.

The minute we heard their car roar away, we all started laughing again and sent Andrew outside to assess the situation.

They had picked the garbage can, alright, but they had left it sitting in the middle of the road. Andrew moved it back to the curb and it was emptied the next morning by a very kind garbage man who dragged it onto the street in front of the house. I suppose it wasn't supposed to be on Mission Boulevard in the first place...
Posted by Nancy at 11:09 PM