Because, really, who needs pants?

When you’ve got a big, floppy hat and golden slippers nobody’s going to be checking for pants. 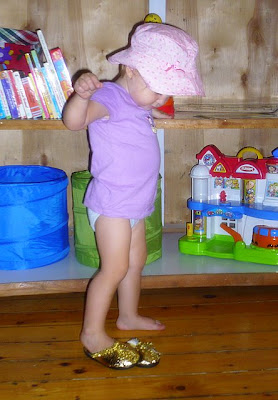 Plus it’s a lot easier to make it to the potty on time if there’s only one layer to take off. We recently traded in our prefolds for underwear and Rachel’s been doing a great job of making it to the potty! She was so excited when we brought them home from the Bio Shop (Road 231 in Degla). We had to put a pair on right away. But then she didn’t want to take them off to do her business and ended up having an accident in the hallway.

I ran her to the bathroom and made her take off her underwear. It was soaking wet, so I put them in the diaper pail to be washed. She growled, stood up from her potty, marched to the diaper pail and retrieved her underwear. I told her that the underwear had to stay there because she peed in it, but we could put another pair on and if she didn’t pee in that pair she could wear it for as long as she wanted or until bedtime, whichever came first.

Two days and two accidents later brought us to yesterday, which was an amazing day, potty-wise. Rachel woke up shortly before 9:30 AM, wet already. She did her morning BM and was in underwear until 1:15 without an accident. I changed her back into a diaper so that she could have a nap, and she woke up, wet again. We put her underwear back on and she went through the rest of the afternoon accident free. She went potty right before I put her in a diaper to take her over Lora’s and asked her to just hold “it” until I picked her up, which she did. I put her on the potty when we got home she did her business and went straight to bed.

It was awesome. I hope this is a new trend.

Update: This appears to be a new trend. Perhaps I’m crazy, but I took Rachel out and about wearing underwear (covered up this time with rubber pants and brown gauchos). She stayed dry all during playgroup (although I think she might have peed in the pool (but honestly, what kid hasn’t done that?)) and she spent the afternoon and evening running around wild with all the Lewis children. I think it’s safe to say we're well on our way to being potty trained! 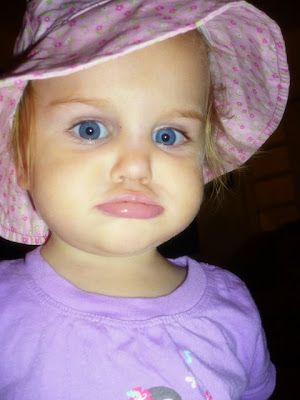