I love playgroup. I especially like it now that Rachel is brave enough to venture off on her own a little. She's always been pretty brave (read: aggressive) at playgroup but she was just too small and wobbly to get a lot of playing done on her own. Besides, I had to watch her like a hawk to make sure she didn't gauge any eyes out.

She's softened up in her old age though, and rarely goes for the eyes. Instead she goes for hugs, which is nicer but still not usually very welcome on the receiving end of things.

But she can go up and down the playground equipment with some efficiency and, once Sam showed up, she left my shadow and started following him around like some kind of movie star. I don't think he minded, though, because he seems to like her, for the most part. He calls her "Ray-church," which I think is cute--alas, he had the opportunity to say it so many times today that now he almost says it correctly. *sniff*

We've been trying to get Rachel to say Sam's name because she can say both "s" and "m," but she just doesn't get it. He is definitely one of her favorite people, though. We were out walking the other day and I said,

"We're going to go play with Finn and Abby. Do you like Finn?"

It was keeping her entertained so I kept going.

"Dada!" she said while nodding her head.

A big grin spread over Rachel's face and she started kicking her legs, clapping her hands, and bouncing up and down. I had her in the front carrier so it made things kind of awkward. I had to calm her down before I could really walk again.

"Oh, sorry. Sam's not going to be there. Just Finn and Abby."

That burst her bubble. She was still happy, just not ecstatic. She likes little babies but has this certain fascination with Sam. He can do things that she can't do. And that, in turn, encourages her to do things that she maybe shouldn't be trying at her age.

Anyway, back to today. Sam came onto the scene yelling, "Raychurch! Raychurch!" and nothing got done until Rachel had given him a hug. He pushed her away, but she was not easily put off and stuck to him like glue. And as much as he didn't seem to want to have her with him, he sure did call after her a lot to make sure she was still following him and even gave her a helping hand or two. 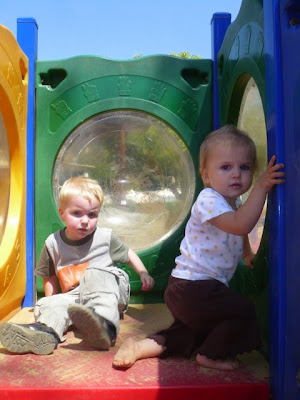 "This slide looks too scary, Sam!" 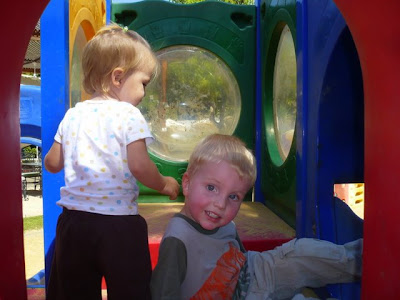 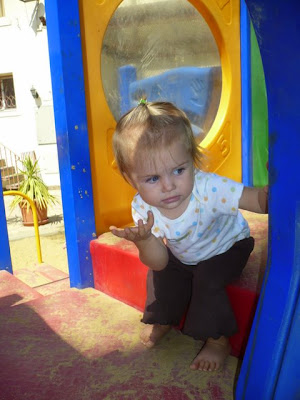 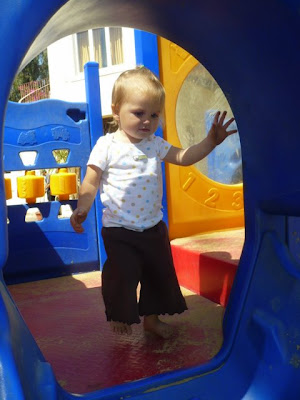 "Okay, here I come..."
And with Megan dishing out wedgies we should have Rachel acting like a younger sibling in no time...
Posted by Nancy at 5:06 PM