While scanning through the shelves of games at Moudy’s Rachel and I happened upon a game of UNO. We forgot to bring our UNO cards and Andrew had mentioned that he would like to get in a few good rounds of Cutthroat UNO while we were out here, so it kind of jumped out at me. It jumped out at Rachel as well. She picked it up and wouldn’t put it down, causing a wonderful temper tantrum at the time. I made her put it back because I’m a mean mom.

A few days ago, though, we went back to Moudy’s to see if they still had a game of UNO for us to buy. Rachel was the one who spotted it and embraced it with relish. She had a very difficult time parting with it when I told her we were going to put it in a bag to give to Daddy. She was under the impression that anything cool we purchase belongs to her.

She forgot about it soon enough and was just when Andrew opened it as he was. Probably more excited, actually. You see, this is no ordinary game of UNO. It came in a big, red box shaped like a hexagon prism. Inside that box is a black box and inside that box are the cards. Rachel is much more interested in the box than the cards. I can hardly blame her. The box really is pretty cool. 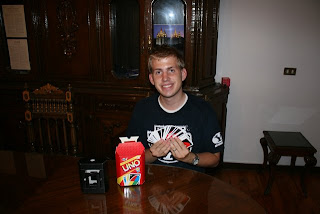 Egyptian UNO cards
The cards are alright, I guess. They’re pretty flimsy but they serve their purpose. They are made in A.R.E.—the Arab Republic of Egypt—under the brand name FUN, which apparently is "America’s #1 Brand of Family Games!" It’s a “high quality products original,” which we’re guessing means a rip off, unless Mattel knows about this company.

Andrew and I played a few rounds of regular UNO while we were waiting for our landlord to leave last night. We were too tired to even consider playing Cut Throat (which is more fun with more than 2 people, anyway). I’m not sure that we’ve played a lot of 2 player UNO. We kept running into problems and even had to refer to the rules a few times.

We learned that if you play a reverse the order with only 2 players, it works the same as a “skip a turn” card, which actually makes a lot of sense.

There were a few rules that we didn’t remember at all and were wondering if the rules in the Mattel version of UNO include any of these:

1) Players who make card-play suggestions to the other players must draw 2 cards from the draw pile.
2) If a player plays a wrong card and it is noticed by any of the other players, h/she must take the card back and take 2 extra cards from the draw pile. Their turn is then skipped.
3) If a “draw 4” card is played, the person who would have to draw 4 can challenge the person that played it by asking them to show them their hand. If the “draw 4” was played illegally, the person who played it has to draw 6 cards (4 + a 2 card penalty), but if they played it legally the challenger has to draw 6 (the original 4 + a 2 card penalty).

I don’t ever remember any of those rules from my UNO playing days. Does anyone out there know the truth? I suppose I could look it up online, but I’m sitting at home right now and we still don’t have internet, so…

We’re also interested in the description of the “action cards” because our rules get pretty biased. The first sentence under the “Wild Draw Four Card” states that “this is the best card to have.” Do the real rules really rate the cards as good, better, best? I don’t remember. We haven’t played UNO for a while and I can’t remember the last time I read the rules.

Any of our friends around here up for a wild round of Cut Throat?
Posted by Nancy at 5:35 AM