We had a branch party on Saturday and, after a wonderful mix up on Andrew’s part, ended up at the correct swimming pool, which was lovely.

Andrew had led us all the way to Maadi Club (or Clup, depending on which sign you’re reading) and we stood at the gate for a while not knowing what to do. He didn’t have any money on his phone so he told me to call someone but I hate making phone calls so I handed him my phone and told him to call someone.

He called Kevan who told us just to look at the guestbook, choose someone in the branch as a sponsor, write our names down as their guests, and go on in.

We resumed our previous position outside the gate looking stupidly lost and out of place.

Andrew handed me back the phone.

Fair is fair. I looked through the numbers in my phone. I need to program more numbers in there. Phyllis was the first on my list. She wasn’t going swimming. Then the Masons. Finn had a doctor’s appointment so they weren’t swimming either. Then Sara.

I need to add more numbers in my phone. I know more people than that. I called Sara who told us that Kevan had just gotten home and would be over shortly to let us in.

A while later Kevan called back. Andrew answered.

“Where are you guys?” Kevan asked.

“At gate #1, right by the circle,” Andrew answered.

Ah, we were supposed to be at Maadi House not Maadi Club (or Clup). Things were beginning to be clearer already. We wandered our way over there, crossing Boor Said twice, much to my dismay. I hate that street with a burning, fiery passion.

At any rate we found our way and had a wonderful swim, even if Rachel wasn’t in to the whole thing. When she’d completely come undone, we decided to call it a day, but not before stopping by the Lewis’s to use the internet.

Once home, Andrew showered while I put Rachel down for a nap, and then it was my turn in the shower. As luck would have it, the power went out the minute I was in. Again, very reminiscent of Jordan (I don’t know why it took us so long to replace that burned out light bulb—was it just a hard light bulb to find or our laziness that allowed the bathroom to remain dark for so long? Perhaps the bathroom was simply more welcoming in the dark. It was a scary bathroom, eh, Crystal?), showering in the dark while praying that the hot water didn’t run out before I finished rinsing my hair out.

The power goes out here all the time, but just in little spurts. It rarely stays out for longer than 30 minutes. Andrew and I did a little sleuthing around our apartment to see if we could figure out why the power goes out so often. It really wasn’t hard to find dozens of reasons why, especially when you consider that every apartment here has similar “features.” Is it any wonder we get a few blackouts now and again?

Scary electricity in our apartment 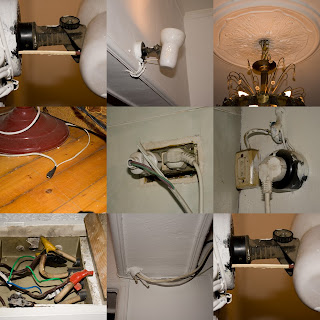 Amateur electricians are everywhere, including Andrew who daringly spliced our phone line together and then, in a death defying feat, chipped away the paint in the phone jack so that we could plug in our phone. (Amateur painters are everywhere, too. They seriously painted over our phone jack, completely filled the little hole with paint). I don’t think they have to train at any special trade school or do apprentice work or anything here. It’s all learn-as-you-go, as evidenced by every single cord in our house. Each one has been cut in half, mangled, and then taped back together. The bigger question is how we get away with so few blackouts. From the looks of things we should have at least twice as many more!

We only use 110 volts in North America and they scare us silly “educating” us at school about the dangers of electricity. We’re taught how to unplug an appliance properly (by the plug, not the cord) and that we shouldn’t use the phone during an electrical storm. My elementary school went so far as to bring in a miniature “green box” and electrocute a hot dog just to show us how much energy was running through those wires. I don’t think I’d ever been so scared in all my life.

Here they use 220 volts but they don’t seem the least bit concerned about being electrocuted. How do they do it?
Posted by Nancy at 3:53 AM