It was Andrew’s birthday on Friday. He’s the big 24 now. Time flies. We had a little party with some of our “small family” friends, the Schillings, Sharps, and Masons. After we chatted for a while I brought out the cake, which was a complete flop.

Andrew’s favorite cake is “Jell-o Cake,” a recipe that his mom would make. I’d never had it before he introduced it to me a few months after we were married. He likes it a lot, so I tried to make something similar here.

We used an Egyptian cake mix. I saw it in the store and had to get it because they voweled the English vowels, which I think is hilarious since English already has vowels. But just in case we forgot where the vowels were or what sound the vowels make, they put the Arabic vowels on to help us out.

Package from the cake
I made a lemon glaze to pour on the cake while Andrew entertained the Schillings in the front room. I thought the lemon glaze was good. The problem with my assessment, however, was that I happen to think lemons taste good. Rachel does, too. She and I can suck on a lemon and not pull a face. Apparently not everyone can.

I brought out the cake, we sang, Andrew blew out the candles, and then we served the cake. 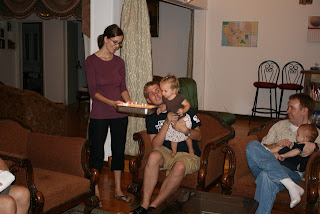 Rachel joining in...
Hardly anyone finished their piece and those that did didn’t ask for seconds. Rachel and I were going to town though.

I was a little disappointed and mentioned this to Andrew after everyone had left. He said that it was just a little too bitter and needed a lot more sugar. To make myself feel better I ate the rest of the cake. I still thought it was good.

Besides the cake, the rest of the evening was great. We talked about the upcoming vacation, played Fluxx (because Andrew wanted to use the “Today’s Special!” card since it was his birthday), and watched Rachel try to interact with Finn. Her personality is a little too potent for him right now. 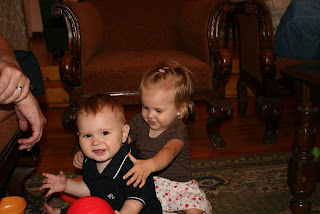 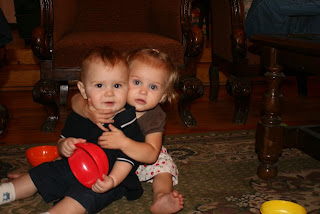 Is she hugging him or strangling him?

In addition to it being Andrew’s birthday it was also International Landlord Day. Our guests started filtering out shortly after the cake was served. First the Sharps left to meet with their landlord, then our landlord came by, and then the Schillings left to meet with their real estate agent who wanted to show their apartment to someone else (since they’ll be leaving in a few months).

Our landlord almost stayed the night. He came to fix our fridge, finally. I’m not sure that he knew it was Andrew’s birthday, but as practical gifts go, it was a good gift. Almost as good as the time Andrew got some fans for my birthday when the air conditioner went out and I was a million months pregnant. Practical gifts are always good gifts.

Our fridge has been rather dreadful. I’m sure you’re all aware of our cockroach problem. That’s improved some, but they haven’t quite been abolished yet. I think part of the reason they keep coming back is because our fridge doesn’t seal all the way so they can get in whenever they like, which I don’t like. In fact, it has been one of the main reasons I’ve been avoiding the kitchen. Every time I’d open the door to root around a cockroach would fall right in front of my face, or run out of the door by my feet, or land on my head, or be on whatever it was I was after.

The fridge is supposed to be a safe haven from cockroaches, or so I thought. We didn’t have that luxury…until the wee early hours of Saturday morning.

The landlord, who has a few antisocial tendencies, was a little miffed that we had company but he decided to follow through with his plans to fix our fridge anyway. He showed up around 9 o’clock and started banging things around in the kitchen. A while later he came into the dining room where we were all seated around the table playing Fluxx. He came over to an empty chair and pulled it out slowly. So slowly, in fact, that we all started wondering if he was going to join us.

“Good luck teaching him this game in Arabic,” Patrick quipped.

Fluxx has no set rules, so it would be impossible to teach someone how to play in Arabic. It’s quite difficult to do so in English…

As it turns out he just wanted the chair. He took it into the kitchen and banged around for a little while longer. Then he came out and took the little table from Rachel’s play area.

“I’m going to go check on him,” Andrew excused himself from the table. When he came back he informed us that Hatim had taken the door off the fridge and had taken the old seal off the door. While Andrew was back there he asked Andrew if he could boil a pot of water. 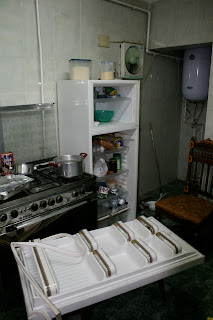 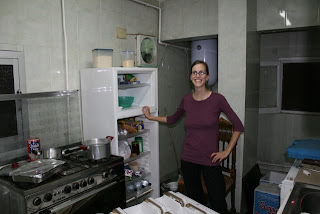 Hooray! Rotting food!
We finished the round of Fluxx and then called it a night. Patrick is allergic to cigarette smoke and we were all getting headaches from it. Hatim has a problem and hasn’t quite grasped the concept that we have a problem with his problem. When we ask him to not smoke in our apartment he stops puffing on the cigarette but never puts it out. We even threw away the ashtray that was left in our apartment…which he somehow dug out of the trashcan and asked if, since we don’t smoke, he could have it.

So, the Masons left and we sat around waiting for our landlord to leave. Eventually he did, but he said he’d be back. He left our fridge all torn apart and I was hoping that he’d be back shortly. Instead he was gone for a few hours before he returned with the bowab from next door (since we don’t have one…still). They took the fridge door outside and were gone for a long time.

There was a knock on the door at 1:30 AM. Hatim was back, with the door. The old seal was back on the door and the whole door was greasy and rather banged up. He put it back on the fridge and then boiled the water on the stove and showed us how to melt the plastic seal with the scalding hot water so that we could stretch it out.

I was skeptical, but it worked. Hatim was able to stretch out the seal enough that it now suctions closed. Our food keeps a lot cooler now and it seems to be pretty airtight. Perhaps now we’ll be able to avoid both the cockroaches and the moldy Gouda. I’m glad that our fridge is fixed, really I am. Ecstatic, actually. I haven’t had a cockroach land on my head for like two whole days now. But really, did we have to stay up until 2 AM just so that our landlord could melt the seal on our fridge? Was that necessary?

He was laughing at us because we were both dog-tired.

“I’m not even tired yet,” said Hatim.

“What time do you usually go to bed?” asked Andrew.

Thanks for fixing our fridge (in a temporary fashion), Hatim, and thanks for leaving before 4 AM. I don’t think I could have stayed up any later. Sorry we didn’t invite you to our party.
Posted by Nancy at 5:22 AM