Ramadan and the Khan

On the first night of Ramadan we went out walking. The city was dead quiet. It would have been eerie had I not know that everyone was just inside with their families eating. We saw almost no one. We went right into downtown Maadi and could walk up and down Road 9 at our leisure. There was no traffic.

Rachel is going to get spoiled this month. We let her get down and run around in the street—something she hasn’t been allowed to do since we left the States. She walked all the way home from McDonald’s the other day. (On a side note, we don’t eat at McDonald’s all the time…it’s more of a landmark).

She doesn’t really understand the whole fasting thing, not that we expect her to yet. We took the metro to Khan al Khalili today and, to postpone a temper tantrum, we gave her a poo cookie.*

It was rather embarrassing for us because we knew that everyone was fasting, but everyone was really nice about it. No one expects her to fast because she’s too young and it’s fairly obvious (from the looks of her parents) that she’s not a Muslim. 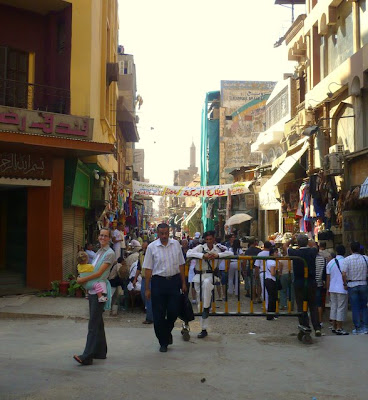 Khan al Khalili was fun. We like to go to the very end of the street where more locals than tourists shop. We walk past all the vendors until we are the only foreigners around and the shopkeepers can’t carry a conversation in English. Then we’ll start looking for what we want to buy.

Our goal for today was to find some new sandals for me. I left my beloved sandals at home in the States. Really they were fit for the trash. I picked them up at Khan al Khalili 2 years ago and didn’t really expect them to last for more than a week. I think I spent 10 LE on them, or something like that. They just jumped out at me and I instantly fell in love. We’ve been constant companions ever since. Needless to say, I took quite the toll on them. They’re totally falling apart, which is sadder than sad because they are the most comfortable sandals in the world.

I looked at a lot of sandals today. Not one pair even came close to the perfection of my last pair of Khan al Khalili sandals. And then I spotted them: the exact pair of sandals I have sitting in a box in my mother-in-law’s basement waiting to be tossed when I unpack them and see how ratty they truly are. Only this pair was new…and far, far too big. Andrew asked the shoe-man if he had anything smaller. The smallest he scrounged up was size 39, which, unfortunately, was still too big.

I suppose I could branch out and try a different pair of sandals, but part of me wants to hold out for another pair of MY sandals. It would give us a reason to visit Khan al Khalili and practice our bartering skills (we’re both a little rusty).

We might have to wait to return until Ramadan is over, though. Things were a little crazy at the firework booths. People were lighting firecrackers in the streets, which I think is a little dangerous, especially when the streets are full of people. Andrew got hit in the ear by a piece of something hot and fiery…and they kept going off right above our heads. It was rather cacophonous with the firecrackers, and the call to prayer, and the vendors yelling about their wares.

Andrew has a friend in his program who lives by Khan al Khalili. According to him downtown Cairo also goes deathly silent for the iftar. It’s almost hard to imagine Cairo being that quiet.

As for the grumpiness, Bridget, we’ve yet to experience that. Of course, we’re only on day 3…so we have a long way to go. And although the vendors at the Khan didn’t seem quite as chipper as usual—sleeping all over their hud and not caring about whether or not they made a sale--they didn't really seem crabby.

The guys at our fruit stand are still happy as well. We went to buy some fruit yesterday (this would make a better story if I could remember the guy’s name. Let’s call him Halid) and Halid (whose real name I can’t remember) went to get Rachel a banana. He peeled it for her and started giving her bites. Andrew got all our fruit and then we acted like we were going to go because in America we would have.

Halid insisted that we stay, though, because he was feeding Rachel a banana. (I keep typing bandana). We talked with him about Ramadan while he fed Rachel her banana.

He was just kidding, of course.

Another upside of Ramadan is the fasting. They fast from eating, drinking, and even smoking. We really have enjoyed the lack of smoking. It’s nice to walk down the street and not feel like I’m going to die of lung cancer after walking two blocks…

*The word "poo" is used to describe the cheapest variety of anything (cookies, milk, bread, etc.); usually they are chock full of preservatives and taste less than real.
Posted by Nancy at 1:44 PM