If the pollution don't get you...

When we lived in Jordan we ate a lot of pasta. It's quick, it's easy, it's almost healthy. Furthermore we were dirt poor and used some of our precious money to buy some really disgusting and highly concentrated tomato paste that we felt obligated to use. This stuff was so strong! We had to mix in fresh tomatoes, regular sauce, and water to make it edible and even then it wasn't great.

We were really excited when we moved here to find that they had regular tomato sauce all ready to eat. Just heat, spice, serve.

"Did you put salt in this?" I asked Andrew.

"Yeah, but I didn't think I put in this much. I dunno. We don't have a salt shaker so I just poured it in from the bag..."

The next time we made spaghetti we measured the salt with a spoon and were very careful to put in only a little. It was still too salty so we started tasting different components of our meal: the Parmesan cheese and noodles were fine. The sauce was salty enough to kill a chicken.

After much experimentation, I finally examined the label.

That could be our problem right there. In the nutrition information it says that a single serving of this fabulous sauce gives you 83% of your daily sodium requirements. 83 percent, people!

I checked all the different brands we had purchased--because we'd tried almost every available brand during our experimental stage--all of them had the same 22% tomatoes, 2% salt deal going on. There was no way we were going to be able to disguise the salt so we started making all our tomato sauces from scratch (which isn't really that hard; we're just lazy and prefer to just open a can).

We go shopping fairly regularly here (like every few days) because things just don't keep as well as they do other places. I appreciate the effort of the Egyptian food packaging companies. I suppose they were just trying to make their tomato sauce have a longer shelf life. That said, someone needs to inform them that "canning" and "salt curing" are two different methods of preservation and needn't be combined. Ever.

Our frequent shopping trips have allowed me to examine the labels of more types of tomato sauce than I'd care to admit, but I think we finally found a sauce that won't give us a heart attack. It's Heinz Pasta Sauce--made in Egypt, sold for Egyptian prices. I think it's like 4.85 LE a bottle, which is only like 75 piasters more than the plain 2% salt kind. It's kind of like Egyptian Ragu and salt comes after onion powder, so that says something about the salt content. Still a little too salty, but good enough, I suppose.

We bought a jar of Heinz Pizza Sauce last time we went shopping (yesterday, I think) and we've yet to try it. They admit that their recipe contains 1% salt, so we'll have to see how that tastes.

Canned beans are also rather salty. I may have to start buying dried beans and boiling them myself but, as I mentioned, we are a little lazy and prefer to just open a can than to go to all the work of boiling water. At least with the beans we can drain out the briney water and eat our slightly pickled beans without the extra sodium.

Oh, and we picked up a big bag of MSG at Seoudi's the other day. That's right. We picked it up, snapped a picture, and put it right back. I'm pretty sure that stuff is lethal, although I do know a certain someone who would make MSG sandwiches (you may choose to come out of anonymity if you wish). 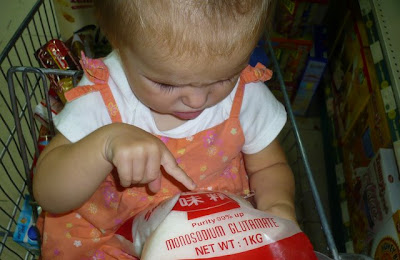 In addition to an effective anti-smoking campaign, Egypt could really use an anti-sodium movement. Really this can't be good for anyone unless there's some magical property of nicotine that blocks out sodium. Perhaps that's the trick.
Posted by Nancy at 3:50 PM