We had a little playgroup at Maadi House on Wednesday morning. Lydia invited several moms in the branch to meet her there because she can take guests in for free on Wednesdays and, in her words, there’s no one there to play with, anyway.

There’s a true statement! The place was really quite deserted. I’m glad that Lydia invited us so that we could enjoy the playground! It’s huge—so much better than the playground at Orchard Creek—although there were no swings. I suppose Rachel will have to do without. There are several different play areas, meant for different skill levels, I suppose.

Rachel immediately headed towards the biggest, most difficult play area and climbed up the first flight of stairs. She kind of panicked when she realized that she was all alone up there and spotted Jacqueline playing on the more age appropriate playground set. After I helped her climb down, she followed Jacqueline around from the play set to the toy kitchen and back again. I think she was kind of annoying Jacqueline, really, since Jacqueline is the youngest in her family and is used to following other people, not being followed.

At any rate, we had a good time. It was nice to be able to kick our shoes off (literally) and just be American for a while. I talked with Lydia, Melissa, and Lora while Rachel played with Jacqueline and Abby and Finn relaxed as only babies can. It was quite relaxing.

Rachel and I haven’t been getting along very well recently. I think it’s because we’ve been cooped up for far too long. Even when we get out of the house, we still feel cooped up because Rachel is either strapped to me or stuck in her stroller—and we’re usually just going somewhere else to be inside. It was good for her to run around in the hot sun, eat some sand, and realize that she still, occasionally, needs me. Like when she walks too far out on the hot sand in bare feet and has to have me rescue her. 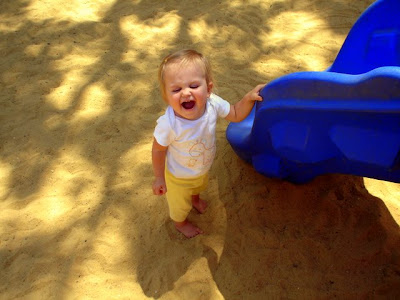 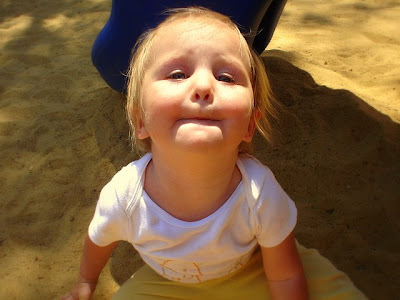 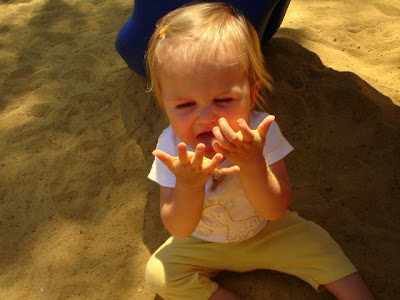 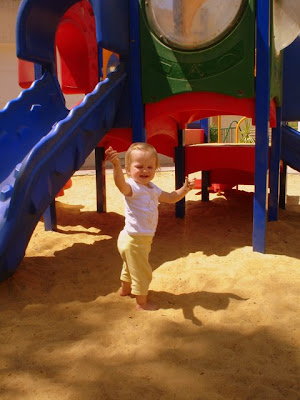 When Lydia decided to call it a day and took Jacqueline home to have her afternoon nap, the rest of us hit the pools. Rachel and I almost didn’t because I forgot our swimming hud but, lucky for Rachel, I found a swim diaper left over in our diaper bag from our swimming excursion last Saturday and so she and I got into the wading pool. Her in her swim diaper and me with my pants cinched up around my knees. 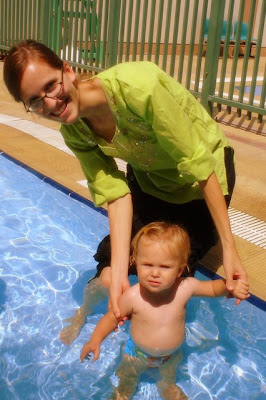 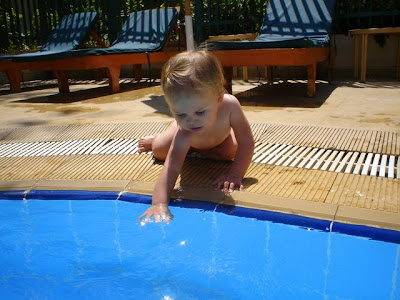 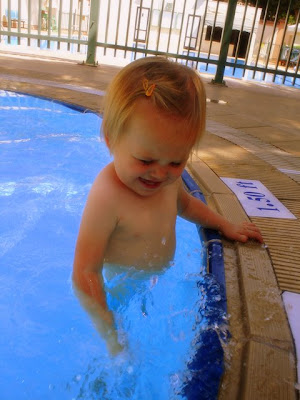 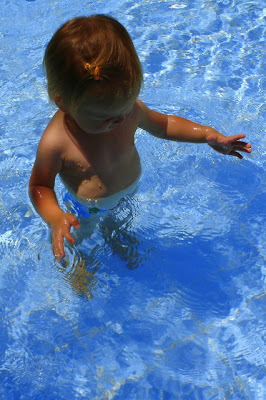 She did a lot better today than she did last week. I think last week was just too crazy for her with so many people in the pool. The pool was, like the playground, completely unoccupied and she had no problem getting in. 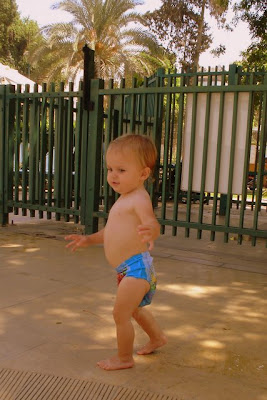 The wading pool is only a foot and a half deep, which is plenty deep for Rachel. She held on to the side and practiced lifting her feet up and down, splashed around for a bit, and tried walking around. She really did pretty well, but the bottom is a little slippery and she kept going under and floundering around until I’d pull her back onto her feet. Nothing really seemed to scare her; she’d come up from each dunk ready to keep swimming. By the time we were ready to go home Rachel was a pro at climbing out of the pool, jumping up and down in the pool (using my hands for balance), blowing bubbles, and not splashing the babies. She never tried to get in the pool by herself, which I was perfectly fine with. 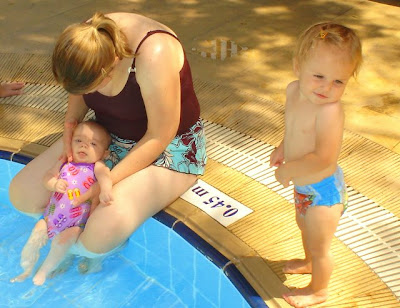 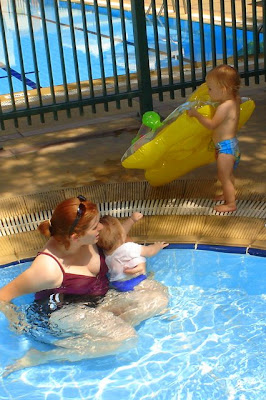 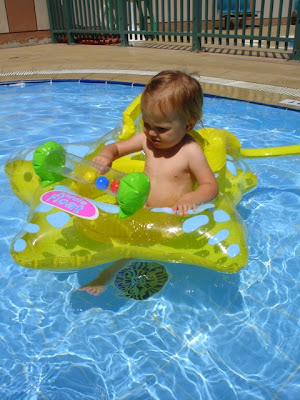 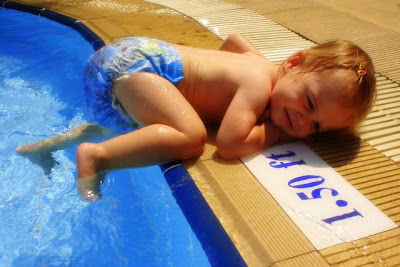 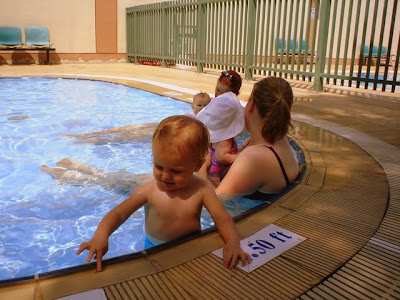 The best part was that Rachel was ready for a nap by the time we got home. That didn’t mean she slept any longer than usual. In fact, she slept for under an hour. Still, she woke up cheerful and we were able to get along for the rest of the day. How sad is my life? Rachel is only one and already we butt heads almost constantly. It’s not that we don’t love each other, because we do. We just have yet to find a way to peacefully coexist.

Rachel actually reminds me a lot of my little sister, Josie. I also love Josie—but I have a theory as to why we’re 9 years apart. My basic theory is that if we had been close enough in age to be teenagers at the same time under the same roof, the house would have spontaneously combusted. Again, we love each other. We have fun with each other. We even look alike and talk alike and act alike…sometimes.

Mostly, though, we’re pretty different people and that makes for some interesting conflicts.

For example, no one in my family sleeps very well. We’re all rather insomniatic and are half-zombie half the time. I am the type of person who, if I wake up in the middle of the night unable to sleep, will quietly read a book or rearrange my stuffed animal collection.

Josie, however, is the type of person who will break out her pogo stick and go for a new world record. I’m not even slightly joking—I’ve actually had to interrupt her 2 AM pogo stick workout in order to ask her to do something a little more quiet.

Yeah, Rachel kind of reminds me of Josie, which is great! Josie is an amazing person, as I’m sure Rachel will be. I just need to find a way to figure out why she does the things she does. Perhaps things will get better when she can talk a little more (perhaps). For now, if running wild at Maadi House helps her to be happy for a day, I hope for many more outings to Maadi House.
Posted by Nancy at 3:26 PM