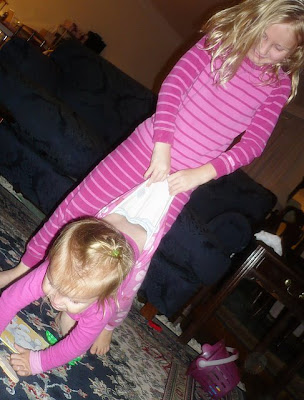 Megan was trying to pick Rachel up, which she is discouraged from doing for obvious reasons, and she dropped her (that's the obvious reason in case you didn't figure it out) but kept her grip on Rachel's pyjama bottoms and rubber pants. Perhaps it isn't an official wedgie since Megan totally missed grabbing her underwear, too, but I think it was pretty good for her first one.

Sorry the picture isn't that great. I was trying to get a shot of the girls in their coordinated pj's (because what would a sleepover be without matching pyjamas?) when Megan picked Rachel up. I hesitated while I struggled internally over whether to rescue Rachel or take a picture. I ended up snapping the picture while reaching for Rachel and this is the result.
Posted by Nancy at 4:36 PM